Researchers at the Univ. of Oxford (Oxford, UK) have generated photonic crystals that operate in the visible spectrum via a technique that is intrinsically fast and relatively inexpensive. They have used holographic lithography to generate 3D molds, which are, in turn, used to create structures with high-index materials. Though the method has not yet been perfected, researchers are hopeful that holographic fabrication -- with its inherent flexibility -- will make the use of photonic crystals more practical.

Photonic crystals are simply structures that restrict the propagation of particular wavelengths through destructive interference. Because the forbidden wavelengths fall within the photonic band gap of the structure, they are often also known as photonic band gap materials. Interference is achieved by creating what is effectively a thick diffraction grating with 3D symmetry and a very high refractive-index contrast ratio. 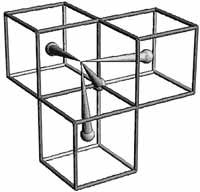 Though they are conceptually simple, photonic crystals have been difficult to fabricate for the visible spectrum because the feature sizes involved have to be sub-wavelength in order to work. Though semiconductor microlithography can now reach the required resolution, the crystals produced are limited in depth, which restricts their effectiveness. Other disadvantages of conventional optical techniques include having to build up the pattern layer by layer (true for microlithography) or even point by point, and insufficient flexibility in lattice design.

The new technique does not have these restrictions.1 Instead of building up a series of patterns on a substrate, the entire 3D crystal is recorded at once by interfering four coherent laser beams (Figure 1). By choosing the appropriate direction, intensity, and polarization relationships between them, the structure of the resulting interference pattern can be manipulated as required (Figure 2).

The beams are generated from a single source, split off using dielectric beamsplitters, and then individually manipulated using half-waveplates. The laser itself is an injection-seeded, frequency-tripled, Q-switched Nd:Yag at λ=355 nm. A single 6-ns pulse is used to expose a thick layer of photoresist (the resin Epon-SU8 dissolved in g-butyrolactone with a triaryl sulphonium salt as a photoacid generator).

Using a short pulse has two major advantages in this setup. First, it prevents mechanical stability from being a problem during exposure. Second, it means that the slow chemical changes taking place inside the resist do not have enough time to change the optical characteristics of the material while the light is propagating through it (so distorting its path). After exposure, the resist is baked to complete the polymerization of the exposed material. The rest is then dissolved away to reveal the crystal structure (Figure 3). 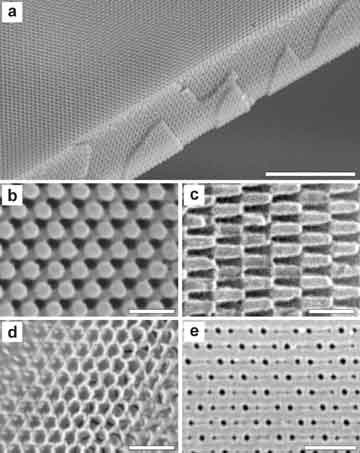 Figure 3. SEM images of holographically recorded photonic crystals. (a) View of the crystal structure. Top surface is a (111) crystal plane, with the film fractured along the (111) plane. (b) Close up of (111) surface. (c) Close up of (111) surface. (d) Inverse replica made in titania showing distortions caused by shrinkage. (e) Surface of a body-centered-cubic photonic crystal in photoresist. Scale bar: (a) 10 µm, (b-e) 1 µm.

Unfortunately, the structure alone is not enough to make the material into a photonic crystal: the refractive index of the photoresist is just 1.6, and therefore insufficient. To demonstrate that the technique could be used to produce a working device, they had to make an inverse replica of the structure in titania. This they achieved by filling the crystal pores with titanium ethoxide and then heating the structure in order to burn off the resist and sinter the titania ceramic.

This last step has not yet been perfected: considerable shrinkage (Figure 3d) distorts the shape of the final crystal with respect to the mold. However, other processes for transferring the crystal shape into a high-index material are available, and the Oxford researchers are currently pursuing these. Also, even the distorted titania structure does show the hallmarks of a photonic crystal, with diffraction patterns through it exhibiting characteristic "Kossel lines."

Sunny Bains is a scientist and journalist based in London, UK. Web: www.sunnybains.com.