Life, the Universe, and Everything: A Chat with Pioneering Physicist Manijeh Razeghi

"Look inside the tiniest of particles and you will find a universe." - Rumi (1207-1273), quoted on the back of Razeghi's "Fundamentals of Solid State Engineering" (2nd edition).

Manijeh Razeghi and students in the cleanroom

The secret to science, according to SPIE Fellow Manijeh Razeghi, lies within the periodic table. "If you take the periodic table, it means you are starting with atoms," says the 2018 winner of the Benjamin Franklin Medal in Electrical Engineering, and chair of the Quantum Sensing and Nano Electronics and Photonics conference at SPIE Photonics West 2019. "The smallest part of any material is an atom, and the smallest atom is the atom of hydrogen, it consists of just one proton and one electron. So, on the one hand, you may think you have reached the smallest scale, but when you look into the recent discoveries of high energy physics, you see that photons, like protons and electrons, are not just simple particles: but they are very, very sophisticated complex entities in their own right. In that way, says Razeghi, these particles mirror the Universe, the arena of our scientific observations. "By looking at the Universe, we discovered the Sun and the Earth and the Moon, and then other planets and stars. But now, with our new technology, we are finding that there are many, many universes beyond our own. Whether we study the smallest scales or the largest scales of science, we find that the elements in nature are much more complicated than we first thought and understood."

Razeghi has always approached those kinds of challenging complications with energetic glee, finding an ongoing source of joy in the ways in which "everything" as she notes, "becomes connected with everything else," She cites examples such as the intricate interwoven relationships between carbon atoms, diamonds, graphene, bucky balls, nanotubes, polymers and carbon-based semi-conductors. All this, she reaffirms, "goes back to the periodic table." But there is more to come, says Razeghi: the magic of carbon is not over yet. It is her personal belief and prediction that the fundamental breakthrough of reaching room temperature superconductivity with all its brilliant consequences will indeed come from carbon.

Her own knowledge-gathering activity started early in life, as a curious girl growing up in Iran. "I wanted to understand everything," she says. "All the time, my parents and grandparents were always explaining everything to me." She recalls an early interest in rainbows - "What is the rainbow? What is the color of it? Why are there different colors? And why is it coming and leaving?" - and why she could only see the Moon at night and not during the day. As she grew older, concern over her father's smoking habit piqued her curiosity around medicinal and biological sciences; she considered medical school, but developed on from that, then followed, an academic interest in crystals, atomic structures, and fundamental physics. 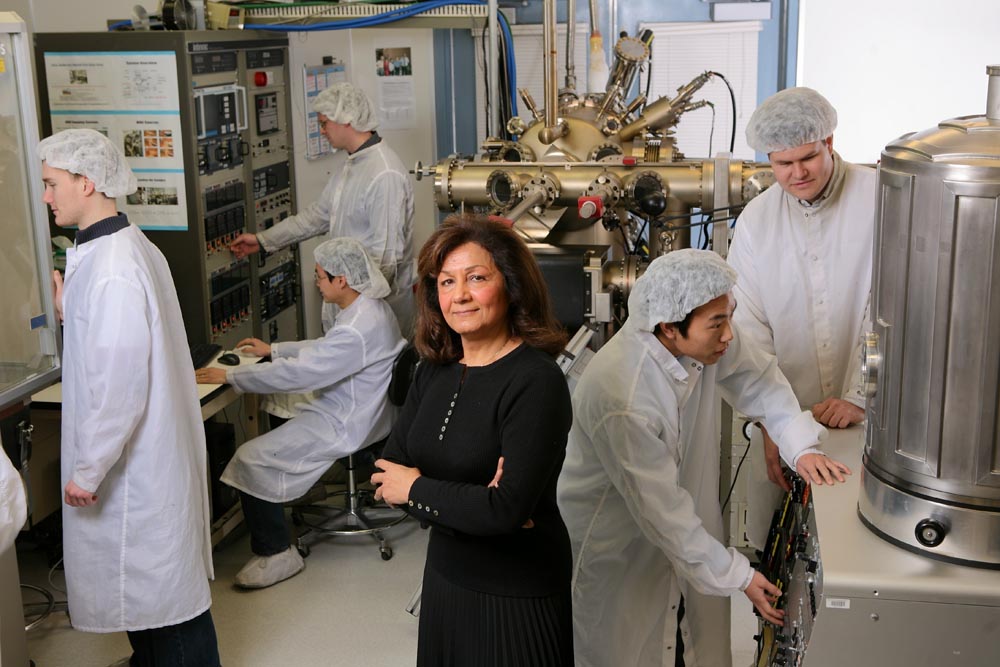 After completing her doctorate at the Université de Paris, she stayed in France, joining the Exploratory Materials Lab at Thomson-CSF, and working on semiconductor technology while pursuing a parallel interest in laser technology. "The first gift that my husband gave to me was a book about lasers and [Iranian-American physicist and inventor of the gas laser] Ali Javan," Razeghi explains. "I was curious to understand more about lasers, and thinking about how semiconductors and lasers might work together." Her pioneering work has already led to the innovative technology of airport body scanners and under-sea, internet-transporting lasers. Today, as the Walter P. Murphy Professor and Director of the Center for Quantum Devices in Northwestern University's Department of Electrical Engineering and Computer Science, her multi-disciplined areas of interest remain reflected in her ongoing groundbreaking work in superconductors, solid-state electronics, and lasers. With a current focus specifically on innovative THz technology developments - utilizing semiconductor optoelectronic materials and devices, including detectors and transistors - Razeghi sees multiple future application opportunities in areas ranging from imaging, astronomy and atmospheric sensing, and medical and biological sciences, to environmental monitoring, communications, and security and defense.

The author or editor of 19 books, including one, with Leo Esaki and Klaus von Klitzing, The Wonder of Nanotechnology: Quantum Optoelectronic Devices and Applications from SPIE Press (2013), Razeghi also prides herself on being a role model for others, as well as a supporter of younger scientists' work. The physicist, who has been working collaboratively with SPIE since 1991, will be chairing an award session at SPIE Photonics West 2019: the Early Career Innovation Awards in Quantum Sensing and Nano Electronics and Photonics, facilitating the kind of recognition so often critical to burgeoning researchers. "I believe that humans have a lot of potential," says Razeghi. "A lot. You need persistence, curiosity, intelligence, imagination, focus, determination, and discipline; it's also always important to understand how studying optical physics can help humans with knowledge - and with progress."

She returns to one of her favorite metaphors: science, she says, is like a puzzle. "Absolutely! Everything is connected and much more complex than we think, but the better you understand all the elements the better you understand how humans work and how the universe works. But science is also about ongoing discovery, developing a deeper understanding of the elements around us: "The more we know, the more we know that there is more we need to know. We now have more knowledge, more translational applications, more progress, more diagnostic tools than ever. What is really exciting is that there is now even more to learn, much more." But it all comes back to the periodic table: "Understanding atoms," says Razeghi firmly, "means we can change and improve the tools we need to improve our everyday lives. That is what I am doing in my lab, through my work, with SPIE, and with my students. It's a broad area that I work in from the material, the design, the applications, but part of the real pleasure comes from educating, teaching and working with my students, to show them, how to persevere, to improve, to share, and to collaborate."

Superlattices see in the dark