Whether as used for circuitry for displays and detectors or oxidized to produce emissive materials, graphene promises to advance photonics
22 July 2010
Kristin Lewotsky

Nanoscale carbon has been making headlines for more than two decades. Whether furled up in carbon nanotubes or assembled into cagelike fullerenes, carbon at the atomic scale shows great potential in everything from photovoltaics to ultra-strong composite materials. Now, graphene -- thin, planar sheets of carbon -- promises to advance photonics with improved detectors, display circuitry, and even emitters.

Graphene is a semi-metal that consists of a hexagonal lattice of carbon atoms, typically in a single atomic layer. It interacts very strongly with light, absorbing approximately 2.3% of incident photons at any wavelength. This unusual broadband behavior makes it enormously appealing for optoelectronic applications such as saturable absorbers for modelocking lasers.

At Cambridge University (Cambridge, UK), researchers led by Nanomaterials and Spectroscopy Group head Andrea Ferrari have used graphene-based saturable absorbers to mode lock tunable lasers. "We first created a laser working at the telecom window at 1550 nm and now we have lasers based on graphene saturable absorbers that can produce 200-fs pulses as well as work over a broad wavelength range."

Another intriguing graphene application is as a more economical substitute for indium tin oxide (ITO), the transparent conductor typically used for contacts in displays. Indium is a relatively scarce material. As displays -- and the demand for ITO -- rise, the price of ITO promises to increase, driving manufacturers to seek out alternatives. Graphene not only consists of plentiful, cheap carbon, it is also less brittle and more flexible than ITO.

"Graphene may not be as good compared to ITO if you just look at the transparency and conductivity, but if you can find applications where the properties of graphene are good enough or you get some other distinct advantages over ITO, then you can justify the use of graphene oxide or reduced graphene oxides for these applications," says Manish Chhowalla, associate professor at Rutgers University (New Brunswick, NJ).

Chhowalla's group collaborated with groups at Umeå University (Umeå, Sweden) and Linköping University (Linköping, Sweden) to produce light-emitting electrochemical cells (LECs) enabled by graphene contacts.1 LECs use electrolytes as the active media. They offer benefits for light emission but the electrolytes tend to react with ITO, reducing the electro-chemical stability of the conductor. For the technology to compete with organic light-emitting diodes (OLEDs), it requires a more suitable transparent conductor like the graphene.

The researchers were able to deposit the electrodes on the LEC from solution, producing light from an essentially all-organic device. "The key thing is that we have an electronically active material that can be processed from a solution," says Chhowalla. "Once you have that, there are techniques readily available to do the patterning and device fabrication." Methods include inkjet printing or stamping or roll-to-roll types of processes.

Graphene can exhibit ballistic transport and in diffusive transport features extremely high electron mobilities. Although researchers have engineered bilayer graphene structures with bandgaps, natural graphene is a zero-band-gap material. Unlike for typical III-V semiconductors, that band structure is symmetric. These characteristics can be particularly useful for photodetectors in which graphene is the active medium. Because the work functions of graphene and metal contacts are generally different, the graphene valence and conduction bands undergo a gradual distortion near the metal-graphene interface, which creates an electric field. That field acts to separate electron- hole pairs generated within a few hundred nanometers of the interface. As a result of the symmetric band structure, the electrons and holes feature comparable mobilities. That ensures a very fast photo response -- as high as 200,000 cm2/Vs in the suspended condition, according to Phaedon Avouris, manager, Nanometer Scale Science & Technology and IBM Fellow and IBM's T.J. Watson Research Center (Yorktown Heights, NY). "Also the Fermi velocity of carriers in graphene is an order of magnitude higher than in any other semiconductor," he says. "If you irradiate a graphene device near the contacts, you're going to get a very fast photocurrent."

In most photodetectors, a bias must be applied between the contacts to collect photocurrent. That bias generates dark current, which contributes to higher shot noise. A graphene-based photodetector requires no bias for photo current collection, so all the current generated in the device results from incident light. Taken together with the broadband response, these characteristics raised the prospect of an ultralow noise, ultra high-speed universal detector.

Of course, this is the real world where nothing comes easily. In general, the electric field generated at the graphene/source interface is the opposite of the electric field generated at graphene/drain interface. As a result, if incident radiation shines on both source and drain, the photo currents generated cancel each other out. To eliminate this problem, the IBM group first tried the obvious solution, masking the detector to irradiate only one set of contacts at a time. The device demonstrated a flat response over speeds from DC level to 40 GHz. In more recent work, the group developed interdigitated electrodes consisting of palladium, a high-work-function metal and titanium, a low-work-function metal (see Figure 1).2 Because the work functions differ, so do the electric fields they generate, which means that the photocurrents do not cancel. In tests at 10 Gb/s, the device demonstrated error-free detection. 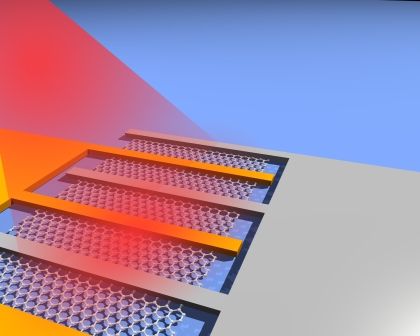 Converting graphene to graphene oxide yields a material with a relaxation time long enough to allow photoluminescence. Not only can graphene oxide generate output when optically pumped, it can do so at multiple wavelengths. Chhowalla's group, for example, used a pulsed UV source to obtain emission at both blue and red wavelengths, depending on how the material was processed.3

There is currently a debate underway regarding the exact mechanism that produces the luminescence. "There can be several different reasons for what we think is happening," says Chhowalla. "Graphene oxide contains carbon atoms bonded with oxygen functional groups but that carbon-oxygen bonding is not necessarily uniform. You might have four-or five-membered carbon rings where you don't have any oxygen bonding, so you have small molecular conducting regions within an insulating C-O matrix. These very tiny clusters of carbon have optical and electronic bandgaps associated with them. A larger cluster will have a smaller bandgap and a smaller cluster will have a larger bandgap. By tuning the size of the clusters, we can get red emission from clusters that are large and blue emission from clusters that are small."

Other researchers believe that the photoluminescence is an artifact of the oxygen. At Cambridge University, Ferrari's group has coaxed photoluminescence from graphene oxide produced using oxygen plasma.4 "We wanted to have individual graphene flakes produced by micromechanical exfoliation and in a controlled way cut them down to quantum dots," he says. "If you use a plasma, you can work at room temperature and it is much easier to control the process." He theorizes that the luminescence is due to oxygen related states at the oxidation sites, rather than confinement in small clusters.

Broadband non-linear photoluminescence is also possible in pristine graphene, says Ferrari, with several groups having observed this recently. In much the same way that an ultrafast laser can create a non-equilibrium carrier population and, thus, saturable absorption, these carriers can also recombine, giving rise to luminescence with no need to modify the pristine structure of graphene. Although the target of global interest, the research is in its infancy and gives rise to spirited debate about the physics, the materials characteristics, and even the practicality. Only time will tell whether graphene will eclipse graphene oxide in this area.With the constant global advances and applications such as ITO replacement under aggressive development by display manufacturers, it appears the chances are good we will see graphene products within a three to five year time horizon. "The progress the field has made in the last six years is incredible," says Ferrari. "Graphene optoelectronics and photonics has become a real technology."

Thanks to Jack Plunkett of Plunkett Research for useful market conversations.

Kristin Lewotsky is a freelance technology writer based in Amherst, NH.

It's one thing to produce small amounts of a material for laboratory use. It's quite another to support the demands of a consumer market. According to estimates by Display Search (Santa Clara, CA), some 242 million televisions will ship globally in 2010. That doesn't count the portable device or computer-monitor market. If graphene is to replace ITO, manufacturers must be able to produce significant volumes of the material economically, rapidly, and reliably.

The simplest method of producing graphene is to exfoliate flakes from bulk graphite using transparent tape. It's a useful technique but not one that can readily be scaled to industrial levels. A more practical method is epitaxial growth, which involves heating silicon carbide precursor in a noble gas atmosphere, typically argon. Above 1200° C, the silicon sublimates, leaving behind graphene. The result is a high quality material suitable for a range of applications.

Another approach is to generate graphene oxide by applying acid to graphite, then agitate the graphene oxide in solution to break it into platelets. These can be deposited onto a substrate, then reduced to graphene through a reduction reaction and annealing. The technique can produce significant volumes of graphene, though the oxidation process does introduce disorder into the graphene lattice, degrading performance. "Graphene oxide gives you large-area, uniform-deposition capability but the performance needs to be improved to make it feasible for real applications," says Chhowalla. The technology may well find a home with lower-performance applications such as mobile phone touchscreens, while high-performance detectors, for example, require epitaxially grown graphene.

Yet another method, chemical vapor deposition (CVD) deposits graphene directly onto a metal substrates. A top layer of polymer stabilizes the material while the metal substrate is etched away, permitting transfer to a target substrate such as polyethylene terephthalate (PET). Because metal foils can be used for the substrate, the method is compatible with roll-to-roll manufacturing. A collaboration of Asian research groups, for example, recently reported the production of 30-in graphene films on copper foil, with sheet resistance of approximately 125 W/square and optical transmittance of 97.4%.1 They tested the films in a touch screen, where the film survived 6% strain, double that of ITO.