Can lasers be a solution for the drone problem?
20 January 2020
By Jeff Hecht
Technology

"Five years ago, few people worried about the drone threat," says Roy Azevedo, president of Raytheon Space and Airborne Systems. "Now, we hear about attacks or incursions all the time." Cheap insurgent drones threaten to take deadly tolls on troops or civilians. Errant recreational drones have also shut down London's Gatwick airport and grounded aerial firefighters trying to douse wildfires. Raytheon is among companies trying to develop laser solutions to the drone threat.

At least 95 countries and many insurgent groups now have offensive drones, according to Arthur Holland Michel of the Bard College Center for the Study of the Drone. Unmanned aerial systems (UASs) have been around for years, but the new threat comes from commercial or homemade drones with takeoff weights under 55 kg, known as Groups 1 and 2. Insurgents have been known to strap explosives to commercial drones, or build drones with three-meter wing spans from plywood and plastic sheets powered by lawnmower engines that can fly up to 150 kilometers. Attackers have further confused defenses by flying up to 13 drones in a swarm.

Defenders have tried a wide range of weapons against drones. Russian troops report shooting down over a hundred small drones with missiles and antiaircraft guns. Defense drones can crash into attacking drones, or can be armed with nets to snare them. Strong electromagnetic signals can be transmitted to jam radio controls or navigation systems. High-power microwaves can be beamed to "fry" electronics. In a recent report titled "Counter-Drone Systems," Michel catalogued 362 systems around the world built to disable or destroy drones. While most sought to disable or deceive communication or navigation systems to destroy or capture them, eighteen zapped them with lasers.

The wide variety of counter-drone systems and technologies reflects the wide ranges of drones and missions. "The fundamental fact is there is no one single approach that is perfect. Every approach has benefits and drawbacks," says Michel. "Lasers definitely can shoot down drones, but they have limitations." Online videos show the 30-kilowatt Navy Laser Weapon System (LaWS) zapping a drone from the USS Ponce, but we don't know how many shots it needed to fire before a successful hit.

Last year, the Pentagon's Defense Innovation Unit summed up the problem: "It has proven difficult to identify and mitigate threats using currently fielded technologies. Counter [drone] solutions require a variety of approaches and technologies depending on location-specific operating considerations." Key requirements include detecting drones, identifying threats they present, keeping up with changes in arsenals and technology, and mitigating diverse threats in different environments. Blowing hostile drones to bits may not be the right solution, since seizing and examining drones can provide useful intelligence information. Moreover, low collateral damage is vital in safely removing unauthorized drones from busy airports or stadium.

The Army now includes counter-drone systems in its Maneuver Fires Integrated Exercise (MFIX). At the 2018 MFIX, a Raytheon laser in the all-terrain vehicle shown in the photo shot down a dozen maneuvering drones, and a Raytheon high-energy microwave system shot down 33 drones in groups of two or three, a step toward fighting swarms. At the 2019 MFIX, Kord Technologies of Huntsville, Alabama showed the anti-drone use of its Mobile Expeditionary High-Energy Laser (MEHEL), a 5-kW laser weapon in a Stryker armored vehicle. That impressed, Lt. Gen. Neil Thurgood, Army director of hypersonics, directed energy, space and rapid acquisition, who says counter-drone lasers are on the way to becoming "a strategic combat capability." He talks of putting 50-kW lasers on a platoon of four Strykers in 2022. "We are on the right path to get it in soldiers' hands," he says.

In October, Raytheon delivered a 10-kW-class anti-drone laser mounted on a military Polaris all-terrain vehicle to the Air Force. The High-Energy Laser (HEL) Weapon System includes a multispectral (optical and infrared) targeting system, as well as 220-volt batteries originally built for electric race cars, and a cooling system. The system, shown in the photo, shot down over one hundred drones in predelivery tests, says Michael Hofle, HEL product line director for Raytheon. 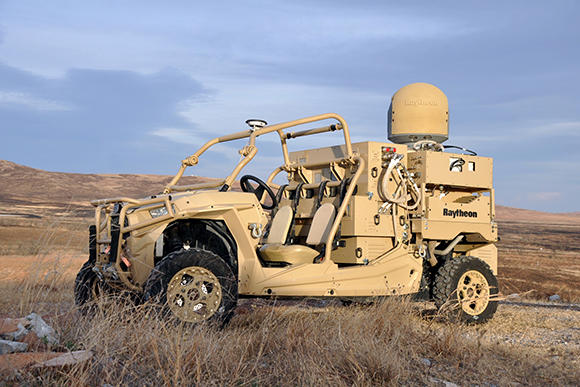 Raytheon 10-kW class laser installed on a Polaris ATV in the field. The module on the back is the company's multispectral targeting system. Both operate on power from batteries used in electric race cars. (Credit: Raytheon)

Hofle says laser and microwave systems have different strengths. "The high-power microwaves are really effective with a large swarm [of drones], because they have a bigger cone of effect" than a laser beam. But the laser has longer range and better precision, so it can focus tightly to detonate an explosive payload or melt one rotary arm to bring down a quad copter. He says laser weapons work best against the troublesome small drones missed by some other defenses. Missiles and kinetic-kill weapons cost much more per "kill," but are needed to destroy large drones. Once lasers are added to the arsenal, additional shots are cheap.

Laser operators track and fire at target drones using gaming controllers and video screens. "When we gave them the controllers, they already knew where all the buttons were," says Hofle. The game controllers are affordable and come naturally to the young soldiers running the lasers, who grew up playing video games.

The Air Force will deploy its new 10-kW anti-drone laser to see how well it performs in the field, and Raytheon is looking forward to input from soldiers using the system. The next steps, Hofle says, will be developing higher-power lasers, and mounting them on more difficult operating platforms such as helicopters.