Modern life is unbelievably complex: a billion intertwined bits of technology-all vital to some aspect of society-are hidden behind plastic and metal facades. To single any one technology out as critical seems a bit unfair to the others, but it can't be denied that the common oscillator plays a large and largely hidden role in most of them.

Every microprocessor relies on an oscillator to provide the timing required to keep operations marching in step. Your Wi-Fi signal depends on a GHz frequency oscillator to transmit information. Cellular communications, internet communication, radio transmitters and receivers, the global positioning system, and many more applications depend on oscillators that span an enormous range of frequencies.

Future communications technology, like 5G, will depend on good quality, cheap, high-frequency oscillators. Engineers realized last century that the laser might provide the technology to obtain very high-quality oscillators. Since then, two basic ways to create a GHz oscillator have been developed. One is expensive, involving highly specialized lasers and a Nobel prize. The alternative, which isn't as precise, is a cheap optoelectronic device that uses laser diodes, filters, and a photodiode.

One key point to creating cheap, high-quality oscillators is that the design and implementation has to be simple. This is exactly the step that Coronel and colleagues have demonstrated in a recent Optical Engineering letter. The researchers created an oscillator capable of frequencies from 40 MHz to 14 GHz, which covers much of the spectrum of interest for clock and communications applications.

An optoelectronic oscillator-like all oscillators-consists of a feedback loop that reinforces an oscillation at a specific frequency. In this new design, the output of a laser is shone onto a photodiode. The laser brightness has some noise, so the photodiode output current has oscillations at all frequencies that the photodiode and laser are capable of generating. The output of the photodiode is filtered so that a specific frequency is fed back into the laser diode's driving current. The current modulates the output of the laser diode, increasing the amplitude of the frequency that was fed back. The positive feedback reinforces the oscillation until it dominates over the noise. A portion of the electrical signal is then tapped off to be used.

Now, for this design to work, there are a couple of conditions that must be met. First, a component that can modulate the laser output at the desired frequency is required. This is typically an expensive external modulator. However, Coronel et al. directly modulate the drive current to the laser diode. This works because the researchers used a vertical-cavity surface-emitting laser diode (VCSEL) that has been stripped of its packaging. Without the packaging, the VCSEL could be modulated at frequencies up to 14 GHz.

An external modulator often generates strong harmonics that must be filtered before detection at the photodiode, and the loss due to filtering requires an amplifier stage before the photodiode. However, all of this has been eliminated in Coronel and colleagues' design. 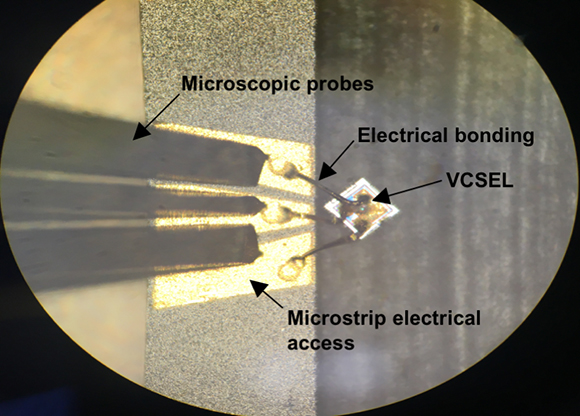 Putting a simple device in perspective

A single-step optoelectronic oscillator, with no need of frequency multiplication for many frequency bands, seems pretty attractive after contemplating the alternative, and moves toward the goal of achieving 5G high-frequency band carriers.

That said, there are some downsides that need to be addressed. The VCSEL was stripped of its packaging, meaning that a high-precision alignment stage was used to connect the electronics and to capture the laser output in an optical fiber. Clearly, to use this oscillator commercially, a custom, low-capacitance package will be required. And, a critical part of the oscillator is an optical delay line, consisting of 120 m of optical fiber. That makes for a rather bulky oscillator as implemented. However, many of these problems might be solved by making the optical part as an integrated optic package, making it much easier to control.