For more than a quarter of a century, Karsten Danzmann has dedicated his career to developing technology that could expand our understanding of the universe by detecting gravitational waves emanating from exotic objects in space.

On September 14, 2015, the Laser Interferometer Gravitational-wave Observatory (LIGO) finally did just that. For the first time, US LIGO detectors in Livingston, LA, and Hanford, WA, heard the first "peep" from an event in the distant universe — in this case the collision of two black holes. The event confirmed a major prediction of Albert Einstein's 1915 general theory of relativity and opened a new window into the cosmos.

It was such a major breakthrough that it took several days for the LIGO team to accept that it might actually be real, according to Danzmann, director of the Max Planck Institute for Gravitational Physics, a member of the LIGO Scientific Collaboration. And it was another five months before they made their findings public. 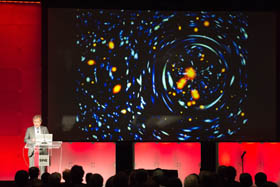 "I've been chasing this for 27 years, and when it finally happened it was unbelievable," said Danzmann, who noted that a second, similar event, the detection of gravitational waves produced by two black holes colliding 1.4 billion light years away, was captured in June 2016 at the same two observatories.

"We've been looking at the universe with our eyes for thousands of years, and we know it looks very different depending on whether we look at it with visible light, infrared light, gamma rays, xrays, ... but we haven't been able to hear it. And suddenly now we can. And we have hope that the dark side of the universe, which makes up 99% of the universe, is now accessible to us."

During the LASE plenary session at SPIE Photonics West 2017 in February, Danzmann's enthusiasm was contagious as he described the developments leading up to that historic moment, from the physics and technology to the thousands of people involved worldwide for decades (the first published paper, in Physics Review Letters, listed 1004 authors from 133 institutions).

For Danzmann, one of the key turning points came when Advanced LIGO, a $200 million upgrade to LIGO, was unveiled in mid-2015. With the upgrade, which took five years to complete, the observatories are now 10 times more sensitive than their predecessors, thanks to advances in the optical layout, new high-power (165W) stabilized laser systems, advanced mirror suspension, and improved pre-isolation for detecting very low frequencies, according to Danzmann.

"The upgrade to Advanced LIGO was drastic," Danzmann said. "The building is still the same, and the stainless steel of vacuum tubes are the same, but everything else has changed."

Danzmann is equally excited about a more recent development: LISA Pathfinder, a satellite mission launched in December 2015 whose payload includes the first laser interferometer in space.

"On the ground we are listening to the high frequencies of the universe, but if we want to listen to low frequencies, we have to go into space," said Danzmann, who is co-principal investigator on the LISA technology package. "Some of the most interesting things in the universe are supermassive black holes. When galaxies collide, which happens all the time, these super black holes merge and emit a huge signal, and that is what we want to listen to in space."

Another LASE plenary talk featured an overview of the current state-of-the-art in using laser-based direct-write (LDW) methods to print hybrid electronics. The talk was given by Alberto Pique, acting head of the Materials and Sensor Branch of the Materials Science Division at the US Naval Research Laboratory.

"The goal is very simple: can we go from a design to a printed part that is not faithful in a structural sense but in a functional sense?" Pique posited. "To do that, we need a substrate, we need to wire it up, place the devices, then connect the wires and devices. If you do it right, you end up with a functional circuit."

This is where additive manufacturing (AM) comes in. AM is considered a game changer for design and fabrication of 3D parts by reducing the number of steps from concept to part, while direct-write processes make it possible to fabricate custom electronics in less time and at lower cost than other techniques. Combining the two paves the way for more efficient and cost-effective printing of hybrid electronics.

The ability of LDW to deposit functional materials over a wide viscosity range onto many diverse surfaces makes it unique among direct write processes, Pique noted. For example, when manufacturing inkjet nozzles, "you have to be careful about the material you put on the nozzle and you have to worry about the nature of the fluid. But when you use the LDW forward transfer technique, the nature of material is not that critical."

Advances in lasers, materials, and positioning have spurred the development of LDW in AM, he added. In particular, the availability of high-repetition rate solid-state UV lasers with stable, moderate energies has allowed LDW to deposit materials rapidly in all three dimensions. By comparison, low-rep rate UV lasers with more uniform beam profiles have enabled printing larger area voxels, which also speeds up the LDW process.

"Over the years, we have shown that with LDW we can both add and remove material, and this gives the laser technique an edge (over other direct-write techniques) because you can do two things with the same set up," Pique said. "The same system performs both additive and subtractive processes."

In July 2016, Gigaphoton demonstrated 250W light output at 4% conversion efficiency with a laser-produced plasma (LPP) light source prototype for EUV scanners. Since then, Gigaphoton has continued to test and refine its EUV light sources, with a goal of eventually reaching 500W, according to Mizoguchi.

In anticipation of introducing these systems to the commercial market, the company is preparing to move into a new headquarters in Japan that doubles its office space and provides 1.5 times the production space, Mizoguchi noted.