Breaking the limits of telescopes: the GRAVITY revolution

Frank Eisenhauer at the Paranal Observatory in Chile in 2018 when the gravitational redshift in the Galactic Center black hole was discovered. Credit: ESO

Frank Eisenhauer is an astrophysicist at the Max Planck Institute for Extraterrestrial Physics. His work on the GRAVITY instrument at the Southern Observatory in Chile has enabled major steps forward in infrared interferometry. Eisenhauer will be a plenary speaker at the SPIE Astronomical Telescopes and Instrumentation Digital Forum, where he will discuss the new era of interferometry, black holes, exoplanets, and his anticipation of our future extragalactic adventures.

Can you give us a basic explanation of the GRAVITY instrument?

The quest for ever sharper images in astronomy requires ever larger telescopes. The largest optical/infrared telescopes today have a diameter of 10 meters, but there is currently no way to build a single telescope with a diameter of 100 meters or larger. The solution is to combine multiple telescopes to jointly form a super-telescope, for which the resolution is then set by the distance between the telescopes. This is done by the GRAVITY instrument, which combines the four 8-meter telescopes of the European Southern Observatory in Chile to form a 130-diameter super-telescope.

What is infrared interferometry and how is it leveraged in astronomy?

The actual measurement of GRAVITY, and interferometers in general, is the strength and position of the interference pattern from a pair of telescopes. For a point-like object, the interference is maximum and centered; for a resolved object, the contrast is reduced and the interference pattern is shifted. Combining these measurements from all telescopes and all wavelengths provides the astronomer with an image resolution 20 times better than what is possible with a single telescope. This opens up a new parameter space in astronomy. GRAVITY was able to measure the motion of a star around the black hole in the center of the Milky Way with such high precision, that it reveals the subtle effects of Einstein's theory of general relativity; it was able to trace the motion of hot gas very close to the event horizon of the black hole; measure the masses of black holes a 100 million to a billion light years away; measure the spectra of exo-planet atmospheres; and, since very recently, even directly image a so-called radial velocity planet, a class of exo-planets, which are so far only observable by indirect techniques.

Your plenary presentation will cover exoplanet, quasar, and black hole discoveries enabled through GRAVITY. Was the instrument built to have such a wide range of discoveries or was its aim for one specifically and the others are a bonus?

The GRAVITY instrument was proposed in 2005 with a clear focus on the observations of the Galactic Center black hole. The schedule was set by the forecast for the nearest approach in 2018 of the star S2 orbiting the black hole once in 16 years. The whole project was driven by this date, and to start observing with the telescopes in 2016 to trace the incoming part of the star's orbit. Other than the Galactic Center, we initially targeted especially bright multiple-star-systems and stars-in-formation, as well as bright stellar black holes, with a large number of relevant publications to date. But with the stunning performance demonstrated with the Galactic Center observations, we applied for and were granted — together with the wider astronomy community — additional observing time for the equally ambitious exo-planet and quasar observations. 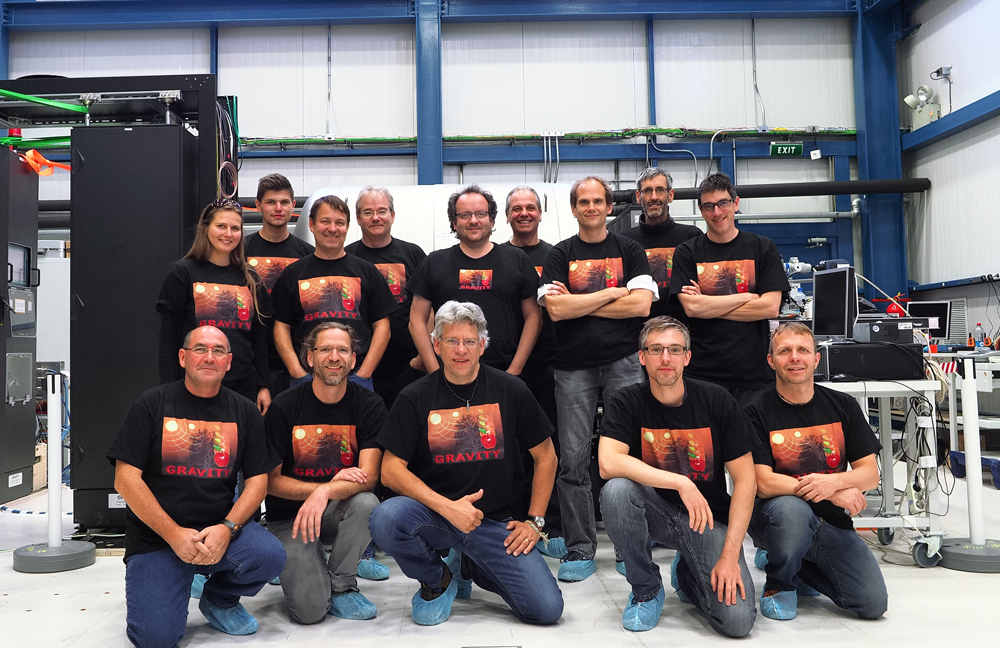 Eisenhauer (top, right) and the GRAVITY instrument team during the first observations at the Paranal Observatory. Credit: MPE

In your work with GRAVITY, what has been the most surprising advance or discovery that you've encountered?

We built GRAVITY for testing general relativity in the vicinity of the Galactic Center black hole, so I would describe the detection of the gravitational redshift and Schwarzschild precession in the orbit of a star more as a long climb up a 8,000-meter mountain. But the discovery of orbital motion of hot gas orbiting the black hole moving at 30% the speed of light, and then the direct detection and spectroscopy of exoplanets, were really a nice surprise, even though we could smell and hope for it, having seen GRAVITY in operation, already outperforming earlier interferometers by several orders of magnitude.

You get to observe such phenomena as exoplanets, quasars, and black holes. Do you have a particular personal favorite when it comes to such Universe-based phenomena? What makes it your favorite?

I admit some personnel bias for black holes from the early 2000s when I was leading the development of the SINFONI/SPIFFI adaptive optics imaging spectrometer. Black holes are fascinating in so many ways: they reveal the fundamentals of space and time while, at the same time being powerful objects shaping the centers of galaxies and beyond. But with the same experimental bias towards spectroscopy at highest angular resolution, I am getting ever more excited about exo-planets. How do they form? What do they look like? Are there planets with atmospheres like our Earth?

We are already taking the next step for GRAVITY — a project called GRAVITYplus — to open up observations of the faint, extragalactic universe. This will be done by running the control loops on more distant reference stars, and by implementing laser-guide-star, adaptive-optics on all four telescopes. Together with further performance improvements on the telescopes and the instrument itself, GRAVITYplus will also boost the contrast for new discoveries of exo-planets and the characterization of their atmospheres.

On the very long term — beyond the upcoming generation of 30-40m telescopes — one can indeed ask the question if optical/infrared interferometry is not the technique of choice for future telescopes, as it is the case for radio telescopes today. If you aim for high angular resolution, you would not even think about building a single dish radio telescope. Even though interferometry is much more difficult at optical/infrared wavelengths, I would not be surprised to see the same conclusion for classical telescopes someday.

Since astrophysicists and cosmologists won the Nobel Prize in Physics in both 2019 and 2020, how do you think this recognition will aid the progression of astrophysics research?

This is a wonderful boost for observational astrophysics. The universe at large has so many surprises to reveal, and at the same time offers unique and realistic avenues to answer our most fundamental physics questions, from unification of gravity and quantum physics to the particle nature of dark matter and dark energy. And all of that at comparably moderate cost, and with manifold opportunities for universities, research labs, and agencies.

What are some of the unknowns of black holes we still hope to learn about?

Next on our list is the spin of black holes. The theory of general relativity predicts that with the rotating interior of the black hole, space and time itself will rotate outside the black hole with stunning effects: light and matter will orbit near the black hole in one direction, but not in the other direction. And even more fundamental: independently of how the original object looked, as soon as it has collapsed to a black hole none of its unique facets will remain, only its mass and spin. This is called the no-hair theorem and can again be tested by tracing stars even closer to the black hole. This is what we aim for with the upgraded GRAVITY and the upcoming ELT.

Attend the free Astronomical Telescopes + Instrumentation Digital Forum for Eisenhauer's presentation on GRAVITY, and other exciting developments in astronomical engineering.

Learnings from the use of fiber optics in GRAVITY