Finding Better Ways to Optimize Everything Together

"The goal is to have a system that transforms the world."
27 February 2020
By Hank Hogan
Events, Technology

Matthew Colburn of Facebook Technologies discusses an immersive AR experience delivered by technology in the form of light-weight glasses.

Talks given at the Feb 2020 SPIE Advanced Lithography conference show progress in getting design and technology working together to produce results. Those presentations, though, also illustrate some lessons learned in this design, process, and technology co-optimization. Paying attention to such items could be helpful, because co-optimization may be needed to meet the device challenges posed by augmented reality (AR).

Regarding the co-optimization lessons learned, in a Wednesday presentation, Wael ElManhawy, a lead technical marketing engineer at Mentor, spoke about using machine learning to speed up the detection of lithography mask hotspots. These hotspots are regions where bridging, which is unintended touching of pattern lines, or other defects are likely to occur. Spotting such hotspots as early as possible in the design or mask layout process saves money and time.

The traditional way to find such hotspots is to run a simulation of the lithographic process, which involves modeling how the resist reacts to exposure, development, and more. This simulation can be computationally intensive and requires a number of steps. ElManhawy noted that this is a lengthy procedure and he reported progress in speeding up hotspot detection using machine learning.

One issue that had to be overcome in achieving these results was the size of the dataset. Machine learning needs training data, a collection that consists of good and bad examples. However, simply feeding a modern chip layout in as a training set was not feasible as there is too much data and the training would take too long. This problem was handled, in part, by keeping in mind the reality of the situation.

So, the group reduced the sample of non-hotspots in the training set while maintaining the number of hotspots. That approach cut the training time significantly. Although he didn't give an exact figure, ElManhawy did say the training took much less than the weeks it would have otherwise.

Another speaker, Hesham Abdelghany, a staff engineer at Synopsis, also discussed using machine learning to co-optimize process and design. There can be a substantial reduction in run time when working on a test product layout using machine learning as compared to what's required when running a simulation based on the physics of the lithography process.

"It needs to learn everything possible," Abdelghany said.

That may mean that a simple random sampling will not work. For example, one test layout used consisted of an array of square holes. The holes at the end of a line may respond differently to lithography than those in the middle, a consequence of not having neighbors on one side. A random sampling approach largely ignored these edge features because they are a small percentage of the total squares. However, they can have an outsize effect on the overall deviation from the ideal layout and so they must be present in enough numbers in the training set.

A glimpse of why such co-optimization is so important came in a Wednesday keynote given by Matthew Colburn, research development manager for Facebook Technologies. The company is developing an immersive augmented reality experience delivered by technology in the form of glasses that are light, comfortable, stylish, efficient, and can be worn all day.

Ordinary glasses improve vision, and these augmented reality glasses will do that as well, if need be. The new technology, though, also seeks to enable on-the-fly translation, provide a memory aid, create a virtual workspace that can be shared or private, or otherwise improve perception.

Getting these devices to attain these goals is not easy, in part because of the way the eye works and how the brain interprets visual data. Colburn predicted that achieving all of the requirements will take sophisticated silicon, with some of it in the glasses and the rest, at least initially, located elsewhere. That silicon will be the outcome of optimizing the design, process, and everything else, with success in this AR technology having a possibly profound impact.

"The goal is to have a system that transforms the world," Colburn said. 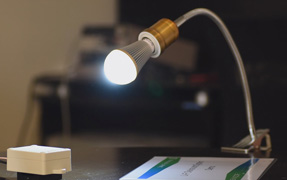