Jie Hui (left), a researcher at the Boston University Photonics Center, is working on a blue laser treatment for MRSA. He is hopeful that the approach could find use in early-adopter hospitals within two years. Photo: Boston University

The challenge to healthcare posed by MRSA is an enormous global concern, given the resistance to several widely used antibiotics that these bacterial infections can possess.

A traditional first line of defense in hospitals and clinics has been stringent controls on cleanliness, to limit the spread of infection. But an optical technique under development at Boston University's Photonics Center aims to eliminate the potentially deadly pathogens with a more targeted approach.

Jie Hui, a member of Ji-Xin Cheng's group at Boston, is working on the use of blue laser light to disrupt the antibiotic-resistant bacteria, potentially allowing a treatment to be developed specifically for MRSA-caused diseases.

"It has been well documented for more than a decade that blue light has an antimicrobial effect, but its underlying mechanism has been a mystery and the treatment efficiency is limited, which has blocked the translation of this approach into clinics," commented Hui. "Our research team discovered that staphyloxanthin, an endogenous pigment produced by the bacteria and bound in its membrane, is the specific molecular target for the blue illumination."

Staphyloxanthin has an antioxidant action, a key element in the microbe's defense against the reactive oxidation process employed by some conventional antibacterial treatments. Weaken or damage the staphyloxanthin, and you can deal a serious blow to MRSA's formidable toughness.

In 2017, Hui's project found that staphyloxanthin is prone to photobleaching by blue light, which ruptures cell membranes and kills the bacteria cells. This effect was proved to work on MRSA cultures, MRSA-infected macrophage cells, bacterial biofilms, and a wound infection model in mice. More recently, the project set out to address a long-standing question within the field: what is the best blue light source for killing MRSA?

"My recent work, grounded in the physics of staphyloxanthin photolysis, demonstrated that a pulsed blue laser source both reduces the potential photothermal effect when compared with continuous-wave light sources, and improves photolysis efficiency and depth, subsequently killing MRSA much more effectively," said Hui. "We also revealed the detailed killing mechanism for MRSA, which opens many opportunities for clinical applications of our technology. These findings are novel and have high potential for development into a therapeutic platform in the clinic."

This project builds upon work that won the group a Translational Research Award at last year's Photonics West, and Jie Hui is now a recipient of a 2019 SPIE-Franz Hillenkamp Postdoctoral Fellowship in Problem-Driven Biophotonics and Biomedical Optics. This annual award, recognized during the BiOS Hot Topics session at SPIE Photonics West in February, is one of a pair of fellowships targeted at interdisciplinary problem-driven research and opportunities for translating new technologies into clinical practice for improving human health.

Specific treatment strategies
"These findings are fascinating both to our research team and to the physicians we have met," Hui commented. "Clinical applications of our technology to benefit patients would be even more exciting. Right now, we are working towards the clinical translation of this technology to treat specific diseases, for example skin and urinary tract infections caused by MRSA. As it moves towards the clinic, we will certainly face some technical challenges. One example is the light delivery system, where we may need to develop specific strategies to match each application."

This may in turn involve different parameters for laser treatment in terms of dosage, illumination area, and treatment time, alongside the possible adoption of specific optical fibers for endoscopic and intravascular applications. The nature of each individual infected site and the general condition of a patient are also likely to play a role. Ultimately, each specific disease may well require its own particular treatment strategy.

Successful translation of any new biophotonics technology, whether for diagnosis or therapy, needs to be grounded on solid scientific studies as well as strong collaboration among scientists, engineers, and physicians. For medical devices in particular, it also requires significant investments to be put in place in order to bring them to market.

MRSA bacteria, as seen under the electron microscope. Image: The Wellcome Trust.

"We are very positive on the clinical translation of this particular technique," Hui said. "Antibiotic resistance is currently a serious public health issue, and MRSA has been listed by the World Health Organization among its ‘priority' pathogens - the 12 families of bacteria that pose the greatest threat to human health. This means our technique occupies a very valuable niche from the clinical point of view, as well as being simple, safe, and effective."

The group is currently initiating a proof-of-concept clinical study using the blue-light technology, likely to take place this year. After that, Hui is hopeful of a smooth path through larger clinical trials and regulatory approval, with early-adopter hospitals perhaps able to deploy the technology within the next two years.

"We really appreciate that the SPIE community recognizes our research work in this direction, by awarding both the prestigious SPIE-Franz Hillenkamp Postdoctoral Fellowship this year and SPIE Translational Research Award in 2018," he commented. "Both awards are highly selective, and target the most promising biophotonics technologies with high translational potential. These awards have already drawn more attention to our research findings, and will further accelerate the translation of our technologies into the clinic and into the market. In the long run, I think these awards will prove to have benefited both the SPIE research community, and patients in the clinic."

Diagnosing esophageal disease with OCT ‘pill'
At the Wellman Center for Photomedicine, located at Massachusetts General Hospital (MGH), Andreas Wartak's research into optical diagnosis of eosinophilic esophagitis (EoE) is paving the way for earlier and less invasive treatment of this allergic inflammatory condition of the esophagus, a disease whose exact nature is still not fully understood. Diagnosis of EoE normally involves a biopsy performed with an endoscope, followed by histopathology analysis of the sample to examine the influx of a certain type of white blood cell that characterizes the condition. But this is by nature invasive, expensive, requires sedation, and is prone to high sampling variability. The Wellman Center project, based in the lab of Guillermo Tearney, is developing a more attractive optics-based alternative.

"We will apply a technique that has been recently developed in our lab, termed tethered capsule endomicroscopy (TCE), in which a pill descends down the esophagus when swallowed and is then withdrawn back up by means of a tether," explained Wartak. "This capsule will incorporate a sophisticated new form of optical coherence tomography (OCT), for visualizing the inside of the esophagus at the cellular level."

OCT's ability to record depth scans of living samples from backscattered light is well established, in particular for ophthalmic imaging. But it is also well on its way to becoming a major technology for intraluminal diagnosis, especially in the cardiovascular and gastrointestinal systems.

"Our project tries to further extend the portfolio of gastrointestinal diseases that already profit from OCT's tomographic imaging approach," commented Wartak. "We will investigate epithelial tissue inflammation, as well as structural changes and sub-epithelial remodeling in EoE. This complementary information will provide key insights into disease development and progression over time, that should ultimately lead to an advance in research, diagnosis and therapy for EoE." 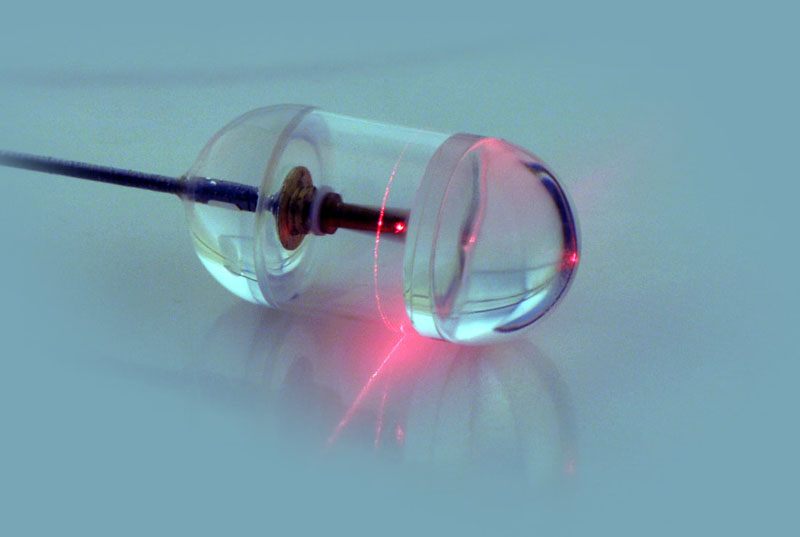 As with most in vivo imaging modalities, the obstacles facing the Wellman Center project include the need for sufficiently fast imaging speeds to counteract the unavoidable sample motion. In this instance, movement mainly caused by peristalsis (muscle contractions in the digestive tract), which cannot be fully corrected by computational methods. Image resolutions able to reveal the smallest details of the biological processes under way in EoE are also essential, delivered in this case by exploiting recent advances in light sources and camera technology.

"The key challenge of this project is to merge specialized high-end equipment and customized components developed in-house, to build a high-speed and high-resolution instrument," Wartak said. "Since we only started recently, most of the work still lies ahead, but I feel that we have all the necessary building blocks available to make this project a success. Our lab has the required technological expertise and sophistication, and has gathered tremendous experience in advancing endoscopic OCT over the last two decades, while MGH offers an exceptional clinical environment. I am positive that we will reach our goals."

Wartak currently expects an initial animal study to be followed by a pilot clinical trial in humans, to demonstrate safety and feasibility in both healthy subjects and EoE patients, adjusting the instrument design by iteration during the process. After that, larger-scale clinical studies are planned at MGH before potential multi-center studies.

Diverse teams ease translation
Eventual translation of the technology from the laboratory to the clinic is another major consideration. The hurdles involved in bringing a novel biophotonics technique to its chosen clinical markets are a natural topic of discussion at Photonics West, which is once again addressing the issue as part of the BiOS symposium. From his perspective at the Wellman Center, Wartak recognizes that translation can be helped or hindered by a number of factors, and that optimizing the performance of a new imaging modality is not the end of the story. Translation also depends on successful collaboration between several different scientific departments, medical clinics, and industry, as well as the funding and regulatory agencies concerned.

Project teams incorporating all relevant stakeholders have the best chance of eventually entering the clinical market with their product, making it essential to have an interdisciplinary field of experts on board from the start of the effort.

"Bench-to-bedside translation can be a long and winding road, and there are definitely hurdles in the way of every technology striving towards the clinical market," he said. "I believe there is now a clear trend of more biophotonic modalities, whether diagnostic or therapeutic, successfully making it into the clinic, and the drive towards translation now seems more pronounced. Nevertheless, there is always room for improvement and, in particular, the need for suitable funding."

As a researcher from Europe now working in the US, Wartak has also observed some geographical differences in the translational funding structures, with the more extensive private funding opportunities available in the US potentially facilitating higher-risk proposals than the more conservative public agencies might opt to support.

Wartak's receipt of the SPIE-Franz Hillenkamp Postdoctoral Fellowship will also now play a part, by allowing him to focus entirely on the EoE research project, increasing the chances of a successful outcome.

"I personally feel motivated by the fact that my research not only seems meaningful to myself, but also to SPIE and thus to a wider general public," he said. "Congresses, meetings, and conferences such as Photonics West are essential. Research is all about sharing discoveries, inventions and results, but it is at conferences that scientists like us have the chance to experience research in a more personal and probably more relatable way."

Tim Hayes is a freelance writer based in the UK. He was previously industry editor of optics.org and Optics & Laser Europe magazine. A version of this article appeared in the 2019 Photonics West Show Daily.