"Neuroscience has an urgent need for new large-scale neural recording technologies to ensure rapid progress in the understanding of brain function, [and the] diagnosis and treatment of neurological disorders," says Daniel Razansky of University of Zurich and ETH Zurich, one of the speakers at the BiOS Hot Topics session at SPIE Photonics West. The ever-popular gathering featured three speakers working on medical imaging modalities - covering the latest progress at their laboratories, and dropping hints of advances to look forward to.

"This may presently sound like an exaggeration, but I truly believe multispectral optoacoustic tomography (MSOT) and other related methods will soon be routinely used in the clinic, one day becoming as popular as ultrasound," adds Razansky. Looking to integrate rapid biological dynamics with MSOT, he sees applications in the areas of cardiovascular and functional brain imaging, tracking cells and targeted agents to yield early diagnosis.

MSOT is based on the optoacoustic effect. And optoacoustic imaging is increasingly attracting the attention of the biomedical research community, thanks to its excellent spatial resolution, deep penetration into living tissues, and its versatile endogenous (internal) and exogenous (external) optical absorption contrast.

Razansky explains that MSOT is able to image through deep tissues with optical contrast, while avoiding the negative effects of photon scattering. Absorption of short pulses of laser light generates tiny acoustic vibrations, which are detected by sensitive transducers and converted into high-resolution imagery.

"Since light provides rich molecular and functional contrast in biological tissues, it is possible to sense intrinsic bio-chromes, such as hemoglobin, melanin, or lipids, as well as extrinsic protein-, small-molecule- or nanoparticle-based labels with our method," says Razansky.

MSOT is used in a broad range of biological applications, such as cardiovascular and cancer research, neuroimaging study of organ function, metabolic research, development of targeted therapies, and treatment monitoring. The realization of real-time, hand-held imaging scanners has seen the technique translate into clinical use, enabling a new level of precision in non-invasive detection of breast cancer and lymph-node metastases, as well as inflammation staging and characterization of skin lesions.

Razansky feels that although MSOT won't necessarily replace existing imaging equipment, it will complement those tools with exciting new possibilities. "For this vision to become reality, considerable efforts need to be invested into making the technology more robust and affordable, tailor it for specific applications, and develop approaches for accurate image reconstruction, interpretation, and quantification," he says.

His Zurich group is busy devising new approaches to address a broader range of applications, such as spiral volumetric optoacoustic tomography (SVOT), hybrid optoacoustic ultrasound (OPUS), and multimodal combinations with optical microscopy. "These technologies generate lots of enthusiasm among biologists and clinicians, especially when it comes to early disease detection capabilities not available with current modalities," says Razansky.

Multiphoton evolution
Also on the Hot Topics agenda was Chris Xu, a professor of applied and engineering physics at Cornell University, to discuss recent advances in multiphoton microscopy (MPM). Speaking before the event, Xu noted that new technology development in the past several years, including lasers and microscopes, has enabled the technique to go deeper, wider, and faster.

"MPM is the go-to technique for high spatial resolution, deep imaging in scattering biological tissue," he says. "The development of long-wavelength MPM has approximately doubled the penetration depth of [the technique] in a living mouse brain."

The combination of long-wavelength and three-photon excitation has resulted in imaging applications that were previously impossible: examples include imaging through highly scattering white matter, an intact mouse skull, and the intact cuticle of an adult fly. 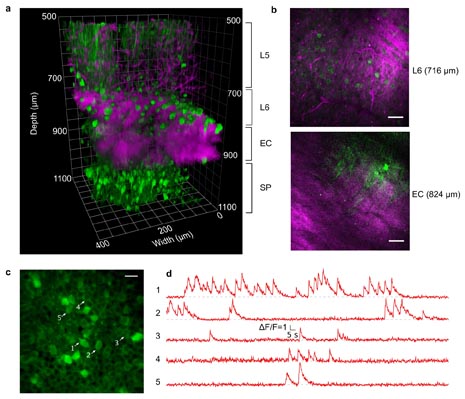 Imaging over a large field of view (FOV) without sacrificing spatial reso¬lution requires new optical engineering, adds the Cornell researcher, highlighting some remarkable new developments in recent years. Those include an imaging FOV of around 5 mm, with 1 micrometer spatial resolution. "Something one could only dream of about a decade ago is now available for deployment in biology labs, and the approaches are robust and relatively cost-effective for practical applications," Xu says. "Along with imaging large FOVs, there are also exciting developments in imaging multiple axial planes."

Xu points out that imaging speed has proved a bottleneck for MPM, because of the requirement for point scanning. A critical concern in rapid imaging is the photon budget: a certain number of signal photons are needed per pixel to obtain the desired signal-to-noise ratio. This means that merely scanning quickly is not enough on its own to ensure genuine fast imaging.

One way to improve that speed is to leverage what's already known about a given sample. "Random access" scanning, for example, using acousto-optic deflectors or adaptive excitation lasers, has developed as a photon-efficient approach for fast imaging. Parallel imaging acquisitions, using either multi-foci excitation or extended-depth focus, can also be used if the sample is sparsely labeled. With these new developments, says Xu, multiphoton imaging at the equivalent of hundreds of frames or volumes per second is within reach.

Extending OCT
Continuing the theme, Yoshiaki Yasuno from the University of Tsukuba in Japan followed Xu with a talk on extending optical coherence tomography (OCT) toward multiple-contrast imaging.

Yasuno notes that although several such extensions, like Doppler OCT, OCT angiography, and polarization-sensitive OCT, have been investigated for several years, image interpretation is often complicated, so the clinical value of the techniques has only been recognized recently.

The Tsukuba group studies various forms of OCT and their applications in ophthalmology and dermatology. Work being presented at Photonics West 2019 included compression-based, polarization-sensitive optical coherence elastography (PS-OCE), developed for simultaneous analysis of birefringence and biomechanical properties of tissues; a method for pixel-by-pixel tissue classification using multiple contrasts of Jones matrix OCT (JM-OCT); and a high-resolution, motion-free, multi-contrast OCT method for imaging the posterior segment of the eye.