With everything in place, what are the prospects for success at the National Ignition Facility? Mike Dunne looks ahead.
15 February 2012

Mike Dunne joined Lawrence Livermore National Laboratory in 2010 as program director for Laser Fusion Energy. This role includes leadership of the LIFE (Laser Inertial Fusion Energy) project, which is designed to build from National Ignition Facility ignition to deliver electrical power to the United States at the gigawatt plant scale.

To date, all of the capabilies needed to conduct implosion experiments and demonstrate ignition and burn at NIF by the end of 2012 are in place. In this video, Dunne explains hurdles that have been overcome and challenges still remaining to achieve ignition.

Dunne was previously the leader of European High Power Laser Energy Research (HiPER) -- a consortium of 26 institutions across 10 countries. Dunne has also held the post of Director of the UK's Central Laser Facility. He spent 10 years at AWE Aldermaston, holding group leader and strategic senior management roles, and is a visiting professor at Imperial College London, where he obtained his PhD in Plasma Physics. Professor Dunne is a Fellow of the Royal Society for the Encouragement of Arts, Manufacturers, and Commerce, and a member of the American Physical Society and the European Physical Society.

In 2011 he received the Fusion Power Associates 2011 Excellence in Fusion Engineering Award. He was honored for his "many technical contributions to high energy density physics and laser facility design and operations, both in the UK and in the US, and also the leadership he has been providing at LLNL" to the Laser Inertial Fusion Energy (LIFE) concept. A frequent invited speaker at technical events, Dunne presented a plenary talk at SPIE  Photonics West 2012, an update on progress toward fusion at the NIF. 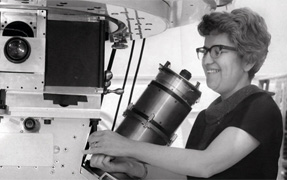 A Telescope of Her Own
Technology