Of Plaques and Patents 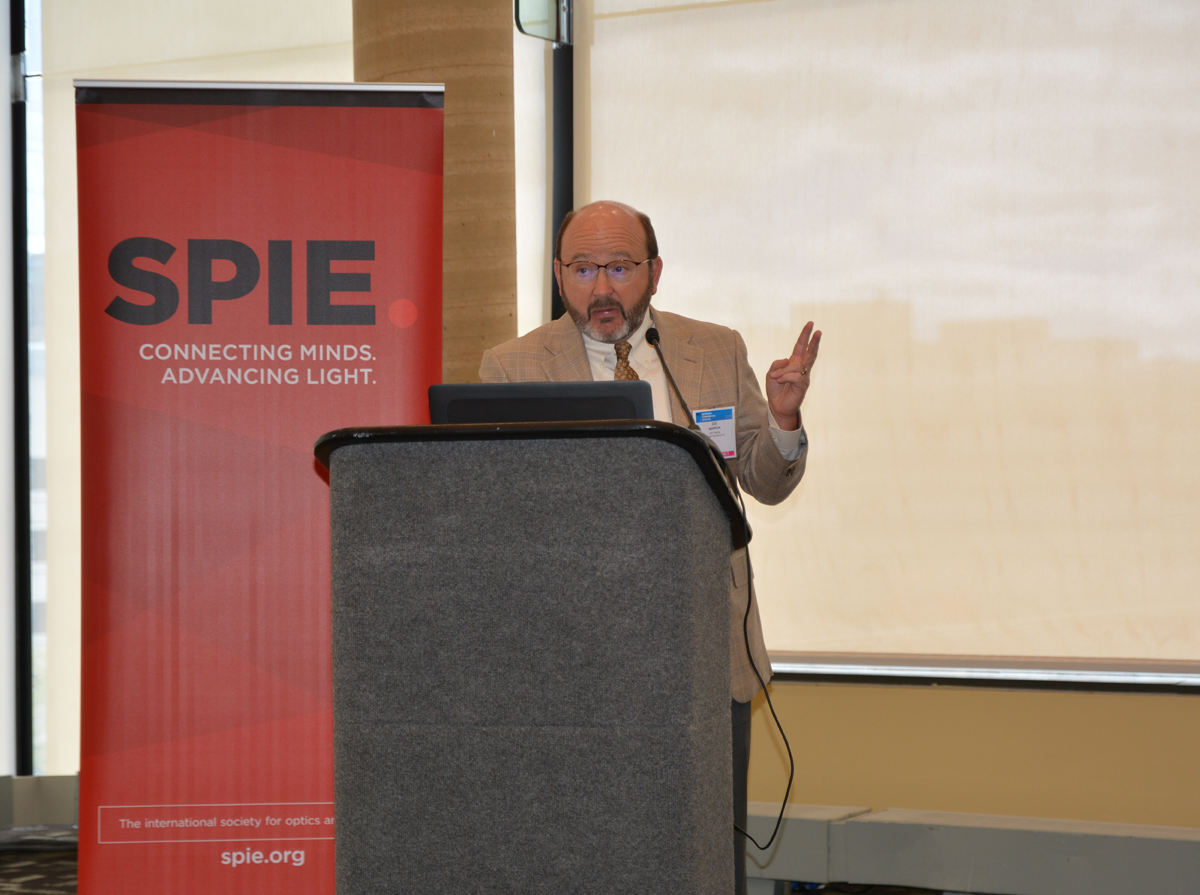 Following the recognition of the new Fellow Members, Dr. Joseph Marron, a principal engineering fellow at Raytheon Space and Airborne Systems, shared an entertaining and illuminating story: in 2018, he was awarded the 10 millionth US patent for his work to improve LADAR. In a talk entitled "Journey to Patent 1E7," Marron described his experience, from the initial notification of his achievement and intensive media training, to his subsequent White House visit.

"The cool thing about the 10 millionth patent," Marron said as he opened his talk, "is that it is right up the alley of SPIE - its title is ‘Coherent LADAR Using Intra-Pixel Quadrature Detection.'" After encapsulating a high-level, highly detailed discussion of laser RADAR systems, Marron described his application of the technology which ultimately garnered him that prestigious patent: "This is perhaps the first group that I've been able to explain the technical details to," he noted with a smile.

About four years ago he submitted a patent application for his idea, "just like any researcher does - you come up with an idea, you send in a patent application." But then, he said, something exciting happened: "I was just returning from a long vacation, and received kind of a strange email from our patent office at Raytheon." It was his first notification that his patent would issue as the 10 millionth patent in US history on June 19th.

"They told me," Marron said, "that the trademark office was making a big deal of it and would I be willing to speak with the patent commissionaire in the morning?" Ultimately, Marron talked with many more people, including a bevy of mainstream journalists as well as the President of the United States. "It was a big deal not just because of the number, but because of international trade implications and because the last time a US President signed a patent was in 1976 when Gerald Ford signed one at the Bicentennial."

In anticipation of that event with the current President, Marron received plenty of media training in order to discuss what the patent was about. "For me," Marron said, "I like to call it ‘Coherent LADAR Detection Using Intra-Pixel Quadrature Detection,' but the media people said, ‘Uh, that doesn't work, Joe.' So we came up with the description that it was a new type of camera for measuring speed and distance. And," Marron said with a smile, "I stuck with that."

From arriving at the White House an hour early due to nerves - and not being admitted until his scheduled time, immediately following the King and Queen of Spain's time slot - to keeping the pen that the President used to sign his patent, Marron outlined his day, winning several laughs and hearty applause, especially when he finished by noting that, "A few days later, I received a letter from the plaque company - and they gave me a free plaque."

Patent E17 may be the 10 millionth patent, but it is by no means Marron's first: "This one was probably my 25th patent," he noted in answer to a question from the SPIE Fellows audience. "My first one had to do with bifocal contact lenses that I invented a type for in the 1980s."