An overview and performance assessment of the seven cameras of eROSITA, a space x-ray telescope launched in 2019
24 May 2021
Publications
A team of scientists from the Max-Planck-Institut für Extraterrestrische Physik, Germany, built an x-ray telescope called eROSITA consisting of an array of co-aligned focal plane cameras with one in the center and six surrounding it. Image credit: P. Friedrich, doi 10.1117/1.JATIS.7.2.025004

Recently, the eROSITA (extended Roentgen Survey with an Imaging Telescope Array) x-ray telescope, an instrument developed by a team of scientists at Max-Planck-Institut für Extraterrestrische Physik (MPE), has gained attention among astronomers. The instrument performs an all-sky survey in the x-ray energy band of 0.2-8 kilo electron volts aboard the Spectrum-Roentgen-Gamma (SRG) satellite that was launched in 2019 from the Baikonur cosmodrome in Kazakhstan.

"The eROSITA has been designed to study the large-scale structure of the universe and test cosmological models, including dark energy, by detecting galaxy clusters with redshifts greater than 1, corresponding to a cosmological expansion faster than the speed of light," said Dr. Norbert Meidinger from MPE, a part of the team that developed the instrument. "We expect eROSITA to revolutionize our understanding of the evolution of supermassive black holes." The details of the developmental work have been published in SPIE's Journal of Astronomical Telescopes, Instruments, and Systems (JATIS).

eROSITA is not one telescope, but an array of seven identical, co-aligned telescopes, with each one composed of a mirror system and a focal-plane camera. The camera assembly, in turn, consists of the camera head, camera electronics, and filter wheel. The camera head is made up of the detector and its housing, a proton shield, and a heat pipe for detector cooling. The camera electronics include supply, control, and data acquisition electronics for detector operation. The filter wheel is mounted above the camera head and has four positions including an optical and UV blocking filter to reduce signal noise, a radioactive x-ray source for calibration, and a closed position that allows instrumental background measurements.

"It's exciting to read about these x-ray cameras that are in orbit and enabling a broad set of scientific investigations on a major astrophysics mission," says Megan Eckart of Lawrence Livermore National Laboratory, USA, who is the deputy editor of JATIS. "Dr. Meidinger and his team provide a clear description of the hardware development and ground testing, and wrap up the paper with a treat: first-light images from eROSITA and an assessment of onboard performance. Astrophysicists around the world will analyze data from these cameras for years to come."

The eROSITA telescope is well on its way to becoming a game changer for x-ray astronomy. 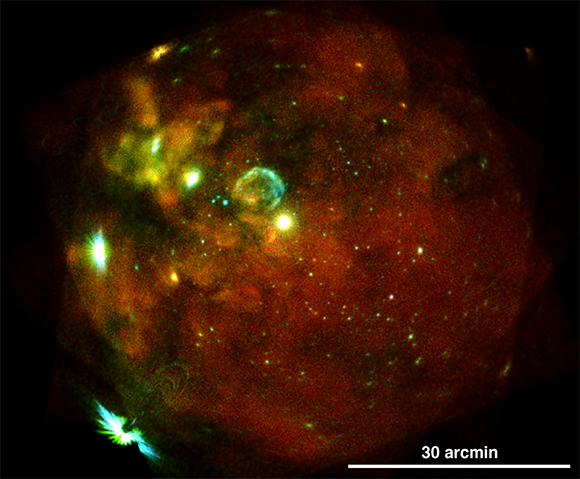 First light of the eROSITA X-ray telescope in space.