With lift-off now scheduled for 18 December, the NASA team of engineers and other specialists who built the international James Webb Space Telescope (JWST)—including its innovative, infrared optics system—will enjoy a brief pause in their work as the instrument undergoes final preparations for launch atop an Ariane 5 rocket from Europe's Spaceport in French Guiana.

No doubt, some members of the JWST team from the US, Canada, and Europe, will be holding their collective breath. Expectations for discovery with the JWST infrared-detecting observatory, one of the most complex space-based scientific instruments ever built, run very high indeed.

Following launch, as the telescope makes its way past the Moon toward a fixed solar orbit a million miles from Earth, there will be a gradual deployment of JWST's instruments. These include its 18 segmented mirrors that telescope operators on Earth must carefully align to gather, as if from a single mirror, light from the far reaches of the cosmos.

Of this "alignment" of the primary mirror segments, a term that includes focusing, "We need to get it to within a fraction of a wavelength of light in accuracy," says NASA's Lee Feinberg, the JWST's optical elements manager. When all is set and the telescope is operational, he says, the 18 segments of the primary mirror will have to maintain alignment for 14-day intervals at which time, with the help of an infrared camera, sensitive algorithms, and the mirrors' actuators, they will be re-adjusted as needed. 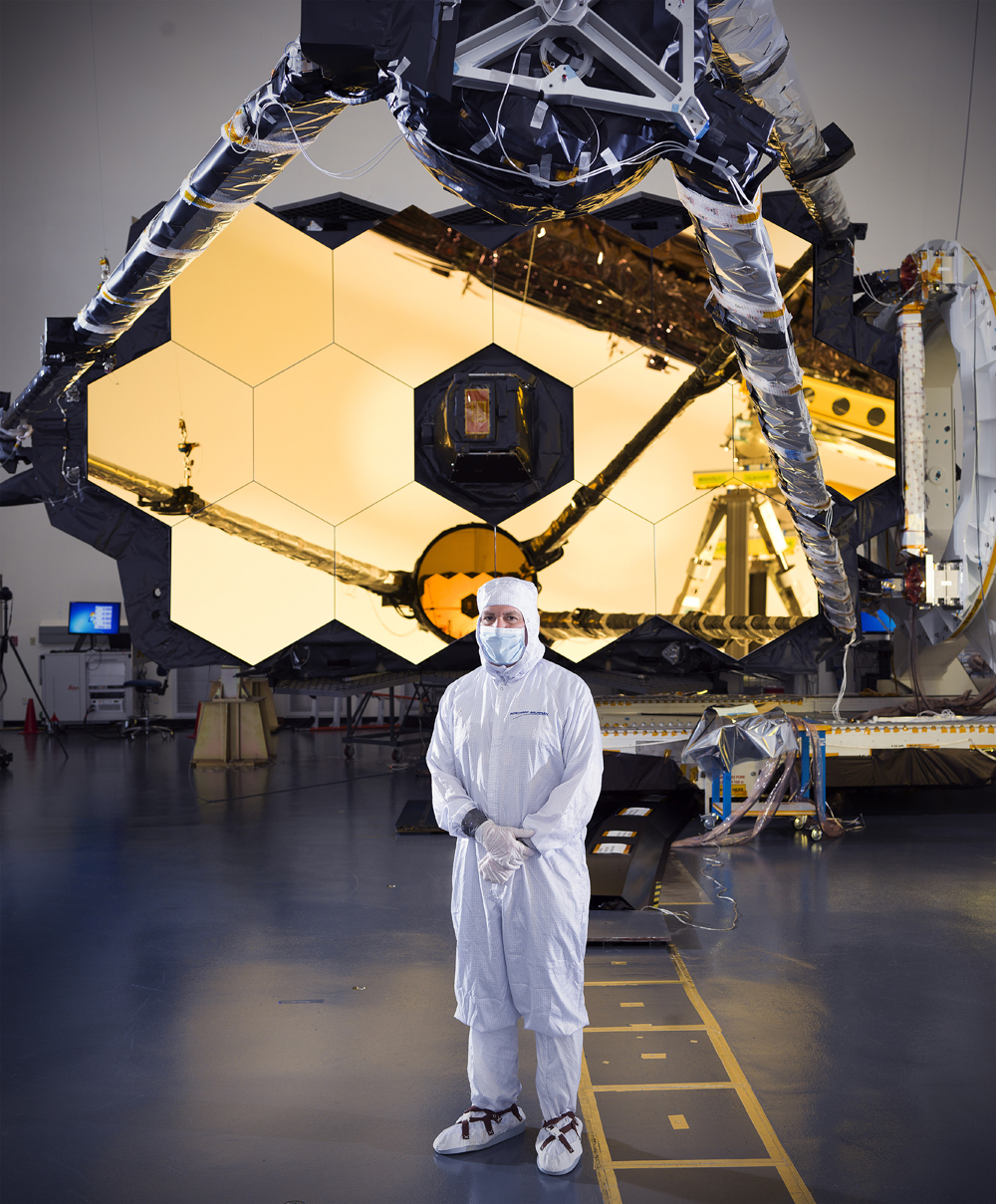 The backplane of the mirror, the structure holding the mirror frames in place, "has to be incredibly stable," Feinberg says. What's more, the telescope and mirrors have been designed to work at cryogenic temperatures—40 degrees Kelvin, or minus 387.67 degrees Fahrenheit.

To maintain those cold temperatures, Feinberg says, a sunshade about the size of a tennis court will be deployed to passively cool the observatory, shielding mostly its backside from the sun.

"You can think of it like a parasol," Feinberg says of the sunshade. By keeping the sun off the telescope, the shade will prevent heating of the precision-polished mirrors and thus any distortion of their optics.

These are among the many challenges Feinberg, an SPIE fellow, has worked on since joining the JWST project 20 years ago. Asked if he has ever felt overwhelmed by the task and the complexity of the instrument, he says it has been a situation where he and his colleagues have taken an approach of building the telescope one step at a time, conquering challenges as they arise while trying to anticipate and solve others.

"We have been so busy, we didn't have time to stop and think about it," he says with a laugh. "Honestly, it was all just very exciting."

That's almost an understatement. The Webb/JWST is an infrared space telescope (Hubble is optical) designed to explore four major science themes that harken back to the beginnings of the universe: identifying the first luminous sources to form, the assembly of galaxies, the birth of stars and protoplanetary systems, and the origins of life.

To detect these events, JWST requires a large collecting area, excellent image quality at 2 µm, and low background noise in the absence of atmosphere at cryogenic operating temperatures. By taking very long exposures in the near infrared (NIR), says Feinberg, the telescope will be able to see the first stars exploding as supernovae and the first galaxies as they form, among other hoped-for discoveries. 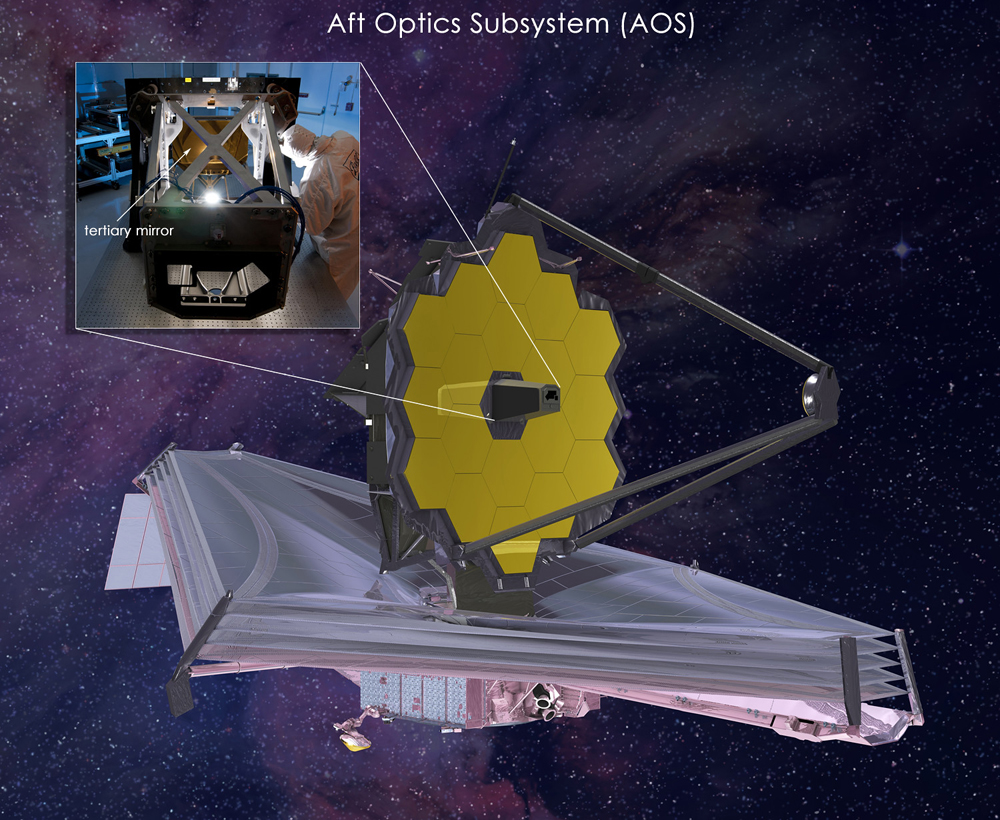 The JWST, an infrared telescope, includes a segmented primary mirror, a secondary mirror placed in front of the primary, and a tertiary mirror and other optics behind the primary. Telescope optics will be protected from the heat of the Sun by a collapsible sunshade. Credit: NASA

The JWST is comprised of three mirrors: the segmented primary mirror, a secondary mirror for reflecting light back to a NIR science camera, and a fine steering mirror. The primary mirror is broken into hexagonal segments, each an off-axis parabola that must be aligned with the others to stay in focus. Although some ground-based telescopes use a segmented mirror design, the team had to invent JWST's actuator system that controls its primary mirror.

Each primary mirror segment is made of beryllium blanks that were precision machined: 92 percent of the original mass was removed, and then they were polished and coated with gold and an overcoat, which gives them their distinctive golden hue. Importantly, mirror optics had to be designed and fabricated for operation at cryogenic temperatures and tested accordingly before launch.

In space, the primary mirror system is designed such that only minor adjustments should be needed to keep the mirrors in alignment. What's more, because interferometry would be impractical for monitoring alignment, the JWST team will rely on monitoring from the science camera itself. And just in case things go wrong, the system is designed to compensate for events such as an actuator failure or failure to deploy one of the mirror segments.

There really are no second chances with the JWST, Feinberg says. Unlike Hubble, the telescope will be out of reach for manned repair missions. So, all systems must work right, right from the start.

Fortunately, Feinberg and his team do have some history as a guide. Prior to JWST, he worked for 10 years on the Hubble Space Telescope, including as a member of the team that fixed the spherical aberration on the telescope's primary mirror—an expensive and embarrassing manufacturing mistake.

Soon after the Hubble error was discovered, NASA appointed a commission, known as the Allen Commission after its chair, Lew Allen, then director of NASA's Jet Propulsion Laboratory. In their report, commission members pinpointed six major reasons the error was not discovered pre-flight as well as various management shortcomings that compounded the problem.

Although JWST is a completely different and more complex instrument, its management team has taken the Hubble lessons to heart, says Feinberg. They are taking five key steps, which can be summarized as the following:

Feinberg says it is an approach that has worked well for other space-based observatories such as the Chandra X-Ray Observatory, the retired Spitzer Space Telescope, and the Hubble servicing missions. In addition, he says, the JWST optics system was prioritized early on, starting with design choices, materials selection, and then fabrication and metrology.

If all goes as planned, some three to six months post launch, JWST should capture its first science-quality images. Feinberg says his work on the telescope will continue and he is certain the technical innovations for the JWST will inform future space-based observatories, including, perhaps, a telescope larger than Webb and placed in the same orbit to look for Earth-like exoplanets.

But for now, as launch day approaches for JWST, "it's all systems go."

Read more from Lee Feinberg on JWST and other telescope projects on the SPIE Digital Library.