At the Nexus of Contemporary Science

Bruce Tromberg on the rise of biophotonics, merging multi-disciplinary approaches, and his new role at the NIH.

As far as Bruce Tromberg is concerned, convergence is where it's at. The recently appointed Director of the National Institute of Biomedical Imaging and Bioengineering (NIBIB) at the National Institutes of Health (NIH), Tromberg has been working at the confluence of biomedical optics and fellow sciences—physics, biology, chemistry, engineering—for more than 30 years.

For Tromberg, an SPIE Fellow whose career has focused on developing, translating, and commercializing new technologies in such areas as breast cancer, vascular disease, and metabolism, this new role presents exciting new leadership opportunities to help expand and promote the Biomedical Imaging and Bioengineering community.

Tromberg's many previous titles include professor of biomedical engineering and surgery at the University of California, Irvine (UCI); director of UCI's Beckman Laser Institute and Medical Clinic (BLIMC); principal investigator of the Laser Microbeam and Medical Program (LAMMP) at BLIMC; co-leader of the Onco-imaging and Biotechnology Program in UCI's Chao Family Comprehensive Cancer Center, and member of the SPIE Board Board of Directors.

"The NIH Clinical Center is the biggest clinical-translational center in the world," says Tromberg, settling into his first official interview since joining the NIH. "There is nothing else like it." Now, Tromberg's work will be an integral part of that center and, along with his NIBIB directorship, he'll establish the "Section on Biomedical Optics," a new laboratory within NIH's National Institute for Child Health and Human Development (NICHD).

Throughout his career, Tromberg has utilized light to image and conduct therapy at the molecular, cellular, and tissue levels. Among other achievements, he has pioneered the development of multi-scale tissue optical spectroscopy and imaging technologies for label-free functional imaging. As NIBIB director, he'll manage 230 employees and an annual budget that for FY19 is $389 million; as a principal investigator at NICHD, he'll get to work with SPIE Fellow and biophotonics pioneer Dr. Amir Gandjbakhche. "Amir's very active in SPIE," notes Tromberg. "We've worked together for many years, including collaborating with SPIE to organize the NIH bench-to-bedside biophotonics workshop. We are planning our next one in 2020, and there is now a significant group of investigators within the NIH who are active in this area."

A bridging discipline
According to Tromberg, "Biophotonics has played an important role in helping drive the growth of engineering and physical science in biology and medicine. NIBIB is the only NIH institute dedicated exclusively to this mission, and it's an area I am proud to say has grown enormously over the past 15 years."

Tromberg also observes that biophotonics is a bridging discipline, located at a critical juncture between fundamental advances in science, technology, biology, and medicine. A really great example, he says, is the 2018 Nobel Prize in Physics for chirped-pulse amplification (CPA). "If you look at what the Nobel committee said about CPA, they emphasized the impact of the technology on a refractive eye surgery procedure that has been performed on tens of millions of patients. This is a beautiful handoff between advances in engineering and physics, and technologies that improve human health. If Gérard Mourou and Donna Strickland were not working on these fundamental techniques, femtosecond laser eye surgery would not be possible. We have many examples of this in our community - several biophotonics technologies have managed to transition from bench to bedside - where we provide connectivity between the basic science and technology, and, ultimately, clinical translation and commercialization." 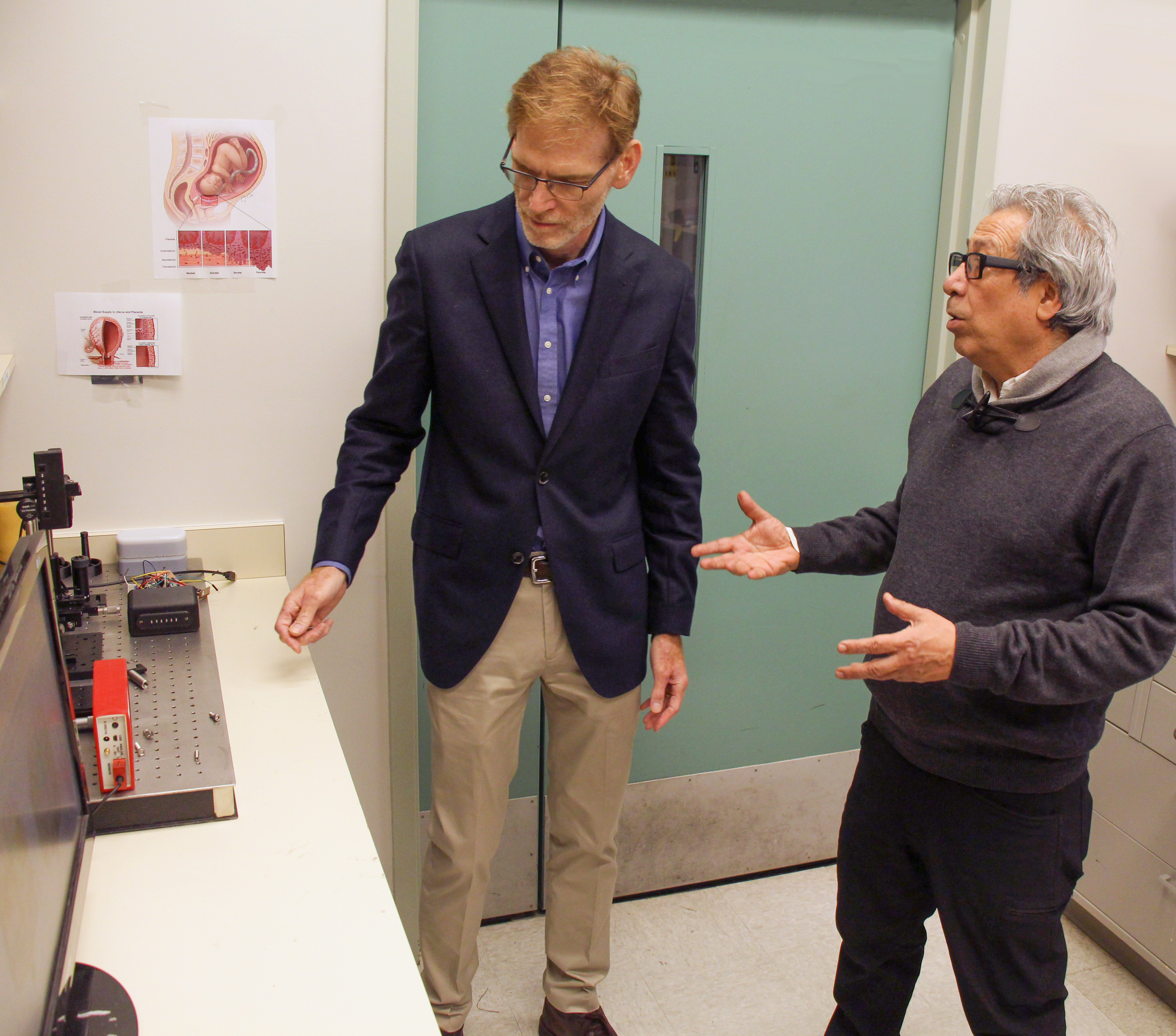 The transition from being a research scientist securing funding to a leadership role at the funding and research-generating organization has been smooth. "I've been supported by and contributed to the NIH mission for many years," says Tromberg. "One of the reasons I was excited to come here is because I've seen our field grow enormously. When NIBIB was legislated in 2000, the engineering community was not widely engaged in biomedical research; our data show that engineering departments received only about 0.6 percent of the NIH budget in 2000. NIBIB became operational in 2002, and by 2018, all engineering disciplines combined received about 2 percent of the NIH budget, more than $700 million. Much of this growth is attributable to the combined effects of the emergence of the NIBIB, and the dramatic expansion of biomedical engineering departments and programs around the country. Importantly, many schools of engineering now identify human health as one of their top Grand Challenges. Naturally this has invigorated the engineering community, but one big story is how the medicine and biology communities are increasingly embracing engineering and physical science as core components of their disciplines. It's all part of the process of convergence that's produced discoveries and technologies that would not have been possible in more traditional, siloed academic settings."

More opportunities ahead
Behind Tromberg's motivation also lies the keen recognition that there are opportunities to grow even further. He points out that many NIH institutes and centers are disease-focused. "Everyone understands the importance of their mission in human health," he notes, "but the story that's not told as well is the role that engineering and physical science plays in biology and medicine. I hope to communicate what our NIBIB community has accomplished and articulate a vision for where we can go in the future."

Tromberg emphasizes that the NIBIB community is composed of "...creative problem solvers and technology developers who are passionate about making impactful contributions to biology and medicine. I am hopeful that support will increase for this type of activity since technological innovation is essential for advancing the mission of all NIH institutes and centers."

Cancer, he explains, was his gateway into complex biology. "I co-founded the Photomedicine program in our comprehensive cancer center at the National Cancer Institute (NCI) in 1993 and served as Program Leader for 25 years. Over the course of my 30-year academic career, I've been able to work in a variety of areas such as cancer, neuroscience, cardiovascular disease, metabolism, and critical care. The promise of new technologies provides a natural opportunity to tackle challenging problems in biology and medicine. But an equally important contribution from engineers and physical scientists has been our success in introducing new ways of thinking about how to understand and solve biological problems." Tromberg notes that understanding the interconnectedness between different types of diseases and the behavior of complex biological systems, or "Systems Biology," is an important example of disciplinary convergence that has benefitted enormously from engineers and physical scientists.

Just the beginning
The extensive reach of optics and photonics is palpable, says Tromberg, referring to Brian Pogue's 2018 article in SPIE Professional in which Pogue breaks down radiologic systems and optics and photonics systems in medicine and biology. "If you look at optics and photonics technologies in medicine, it's about a $70 billion a year worldwide market," says Tromberg. "I don't know what the number was when I started working in this area in the 80s, but it probably wasn't big enough to track. In 30-plus years we've seen remarkable growth driven, in part, by advances in telecommunications and computing technologies that have been rapidly integrated into biomedical research." From Pogue's article in SPIE Professional: Global market valuation, 2015-2017, in US$ billions for most major segments related to medical imaging, including optical systems

The growth in commercialization has also helped academic programs expand. "So many people, from physics, chemistry, engineering, and computer science have been inspired to train in biology and medicine because the innovation economy has unique workforce requirements-and this phenomenon is not restricted to supplying technology companies with qualified graduates; the adoption of new technologies in medicine is creating a demand for medical schools to produce a new type of physician engineer. He shakes his head, grinning. "It's incredible how far we've come in 30 years, but it's really just the beginning."

Without that growth, he says, he wouldn't have been selected for his NIH position; that's due to the amazing creativity, resourcefulness, and successes of the biophotonics community and the professional societies that foster such advances. "I always like to use [SPIE Senior Director of Technical Programs] Marilyn Gorsuch as an example," says Tromberg. "She's helped nurture and guide connections, collaborations, and leadership among SPIE/BiOS members for more than 30 years. Her personal and professional commitment has had an enormous positive impact on the growth of our community."

But with these successes, Tromberg adds, "it is crucial for professional societies and individual scientists to work together to communicate the importance of our work to the public." This type of advocacy on behalf of science is a key component of his new position. "It's necessary for continued growth, and I am looking forward to working together with friends and colleagues around the country to continue to expand our visibility and impact."