In 1987 the research group at Eastman Kodak Research Laboratories (Rochester, NY) reported an organic electroluminescent diode with some rather remarkable characteristics.1 By choosing organic instead of inorganic semiconductors in a novel device resembling a conventional p-n diode, we produced intensive electroluminescence while using a low-drive voltage. This efficiency indicated great potential for display applications, and intense research and development efforts on organic light-emitting diode (OLED) ensued in numerous industrial laboratories, particularly in Japan. A little more than a decade later, the first OLED displays have been commercialized, and the technology is poised to challenge the dominance of liquid-crystal displays (LCDs) in many applications. Indeed, OLED technology is considered disruptive in the display industry because it can so radically change its landscape.

The p-n diode structure proves to be a key feature for the OLED device. The basic structure consists of two layers of organic thin films -- a hole transport layer and an electron transport layer -- sandwiched between an anode and a cathode (see figure 1). These two organic layers, each on the order of about 500 Å thick, provide the appropriate media for transporting charge carriers, which are holes from the anode and electrons from the cathode, toward the interface formed between the two layers. 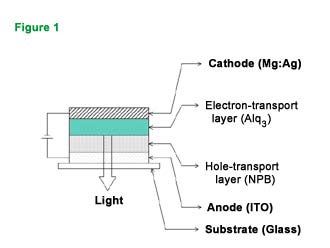 This two-layer design also is important because it provides the necessary energetic barriers at the interface to effectively localize the recombination of the oppositely charged carriers at or near the interface region. As a result, this organic interface region, on the order of 100 to 200 Å thick, is also primarily responsible for the light generation from the OLED device. The luminance efficiency as well as the color of the OLED depends on the molecular compositions of this organic interface.

One of the most basic OLED device structures uses an organic material called NPB as the hole-transport layer and tris-8-hydroxyquinoline aluminum (alq3) as the electron-transport layer. A typical structure incorporates layers of indium tin oxide/ NPB/alq3/magnesium-doped silver (ITO/ NPB/alq3/Mg:Ag), where ITO is the transparent anode and Mg:Ag is the cathode. The energy barriers between the highest occupied molecular orbital (HOMO) and lowest unoccupied molecular orbital (LUMO) levels are about 0.4 and 0.9 eV, respectively, which are sufficiently high to localize the holes in the NPB layer and electrons in the alq3 layer. Recombination of these charges occurs across the barriers, with holes primarily moving into alq3. This effect produces excited states or excitons in alq3 that emit a green fluorescence with its characteristic efficiency. The overall external quantum efficiency is about 1% in photons emitted per charge passing through the OLED device.

Altering the basic two-layer structure to include a luminescent layer between the hole-transport layer and the electron-transport layer can yield OLED devices with much improved efficiencies. A well-known scheme is to dope the interface region with molecules of high fluorescence efficiencies, as in the three-layer NPB/alq3:C540/alq3 structure. Here, alq3 is the host and C540, a coumarin laser dye, is the dopant present at a concentration of about 1%. The luminescent layer is simply a part of the alq3 electron-transport layer doped with C540. Because of the enhanced fluorescence from the dopant, the electroluminescence efficiency of the doped OLED device can exceed that of the undoped device by a factor of two to three.

The doping scheme is broadly applicable in producing OLED devices that can display a wide range of colors, including white. Green and red, or any color shades in between, can be readily produced using alq3 as the host with a suitable choice of one or more dopants in the luminescent layer. By using a blue fluorescent dopant and a host material with a wider bandgap, researchers have obtained efficient blue OLEDs. Similarly, white devices have been made by selecting an appropriate dopant or a mixture of dopants in a blue-emitting host.

More recently, the doping scheme has been successfully applied to OLEDs using phosphorescent compounds as the dopant.2 Steve Forrest's group at Princeton University (Princeton, NJ) has obtained remarkably efficient devices using a platinum (Pt) porphorin as the red dopant and iridium polypropylene (Ir(ppy)3) as the green dopant. The reason that these phosphorescent OLEDs can be much more efficient than the conventional fluorescent versions is that charge recombinations in molecular solids or films statistically result in three times as many triplet (phosphorescent) states as singlet (fluorescent) states. But for most organic materials, phosphorescence from the triplet states is generally inefficient at room temperature, with the exception of a few classes of organometallic compounds containing heavy metal ions that help to relax the forbidden triplet-to-singlet transitions. Further optimization of device structure of the phosphorescent OLEDs has reportedly resulted in luminance efficiency as high as in excess of 50 cd/A.

The reliability of OLED devices has been the major concern for practical applications. It has, however, improved substantially over the years. Using various sets of organic materials, many laboratories have reported achieving luminance life (half decay) on the order of 10,000 hours in devices of all colors using various sets of organic materials. Some of the reliability problems, such as the deterioration of the reactive cathode, have been adequately addressed with engineering solutions. The more basic problem of organic material degradation is now better understood. For instance, it has been shown by Zoran Popovic of Xerox Canada, Inc. (Toronto, Ontario) that it is the hole carrier in Alq3 that is partially responsible for the OLED degradation, and remedies for such a degradation include deliberate introduction of stabilizing dopants.

An OLED is a current-driven devicethat is, the intensity of the output light is directly proportional to the electrical current flow through the device. An OLED display, therefore, requires the control and modulation of electrical current levels through individual elements (pixels) in order to display text or graphic images.

There are two types of OLED display architectures: passive matrix and active matrix. In a passive-matrix OLED display, the columns provide the data signal, and the rows are addressed one at a time. The current flow through a selected row is necessarily pulsed to a level that is proportional to the total number of rows in the display. This instantaneous current requirement places a restriction on the size and resolution of the passive matrix design. This restriction is removed in an active-matrix OLED display.

Although passive-matrix OLED displays are relatively simple constructs with intersecting anode columns and cathode rows, their fabrication requires an innovative solution. The major challenge lies in patterning the reactive cathode without interrupting the underlying organic layers. This problem is solved by the integrated shadow mask method, which involves patterning the cathode before the organic layers and the cathode itself are deposited. To fabricate in-situ cathode separators, manufacturers first pattern the ITO anode, then pattern the integrated shadow mask. Deposition of organic layers takes place next, followed by deposition and isolation of the cathode layer. In a useful design of the cathode separators together with the completed layer structures, the topological features are designed to break the continuity of the cathode layer, thereby forming electrically isolated buses (see figure 2). 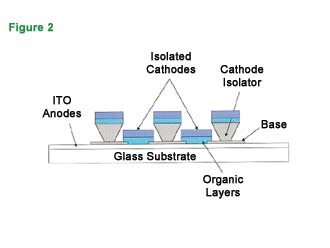 In an active-matrix OLED display, each individual pixel can be designed to switch on or off within a frame time. As a result, the device does not suffer the resolution limitations or the high-instantaneous-current requirements of a passive-matrix design. A conventional active-matrix design features two transistors and one storage capacitor per pixel. Gate voltage modulation yields gray scale output.

Researchers have demonstrated active-matrix OLED displays based on polysilicon or crystalline silicon. The size and resolution of these displays are determined by practical considerations such as the constraints of the substrates rather than the OLED component. Low-temperature polysilicon permits the fabrication of display sizes as large as 5.5 in. on the diagonal. Crystalline silicon limits the display sizes but permits the manufacture of very-high-resolution devices with pixels as small as 12 µm. Because the pixel architecture and electrode geometry for the OLED element are already defined on the substrate, the fabrication of the OLED component is straightforward. The cathode is continuous over the entire display area, requiring no patterning.

Production of full-color passive-matrix, or active-matrix OLED displays requires a method for patterning the red, green, and blue color pixels on a substrate. This is a major challenge because OLED materials and device structures are generally incompatible with conventional patterning methods. Researchers have developed useful techniques to surmount these difficulties, including precision shadow masking and use of a color-changing medium.

In precision shadow masking, a thin stencil mask with precisely defined aperture holes selectively shadows the vapor stream during the organic layer deposition in the vacuum chamber. This method requires precision engineering of the shadow mask and also precision contact alignment between the substrate and the mask. Active-matrix OLED displays with roughly 50 mm color dot pitch have been demonstrated by Kodak/Sanyo (see figure 3).3 Pioneer (Tokyo, Japan) and other companies have produced 5.2-in QVGA displays using the shadow mask method. 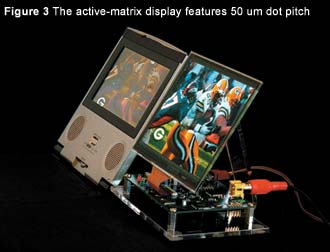 The color-changing-medium (CCM) approach is unique to OLED technology and was first used by Idemitsu Kosan Co. (Chiba, Japan). In this method, a blue OLED display is fabricated on top of a color-changing medium consisting of an array of fluorescent dots. The medium converts the blue display to a full-color display by down-shifting the blue emission from the OLED to produce blue, green, and red colors. Kosan's group has demonstrated color 5.2-in. QVGA and 10.4-in. VGA devices.4

OLED is a viable flat-panel display technology because it has an important set of attractive attributes: high luminous efficiency, color, wide viewing angles, low drive voltage, fast response, and low process temperature. Passive-matrix products are appearing in consumer electronics products such as wireless phones, and prototype active-matrix, full-color displays have gained considerable acclaims for their vivid image quality. There is no doubt that OLED will progressively displace LCDs in many applications and has the potential to become a display of choice for the future generations.