The promise of 2D tunable materials

From the SPIE Photonics West Show Daily: 2D tunable materials would allow researchers to "move from still-life daguerreotype nanophotonics to the film and television era."

In the world of materials science these days, 2D is all the rage. Over the last decade or so, researchers have discovered that by making certain materials into thin, two-dimensional sheets — sometimes only one or two atoms thick — the materials can acquire new properties and behaviors.

In particular, by engineering the nanostructure of these materials in certain ways, researchers can create materials whose properties can be tuned in real-time. Simply by adjusting the voltage, for example, researchers can change the material's basic optical properties, potentially controlling the wave vector, wavelength, amplitude, phase, and polarization of light.

The goal is to do it in the context of all optical processes, from scattering and absorption to luminescence and thermal emission.

Conventionally, the properties of nanophotonic materials are static, built into the design and structure of the device. But tunability means properties that are dynamic, opening a whole range of new technological applications, from driverless cars to 3D holographic imaging.

"This allows one to move from still-life daguerreotype nanophotonics to the film and television era," said Harry Atwater of the California Institute of Technology, who described some of his group's latest advances at Photonics West 2017 on 30 January. Atwater is the Howard Hughes Professor of Applied Physics and Materials Science at Caltech and serves as director of the DOE Energy Center for Artificial Photosynthesis.

Of all 2D materials, graphene, a flat lattice of carbon only one-atom thick, is most famous. Recently, Atwater and his colleagues used graphene to make a material with 100% optical absorption, something that theorists first proposed was possible five years ago.

To force the graphene to interact strongly with light, the researchers sliced a monolayer of graphene into thin ribbons only 50 or 100 nm wide. These ribbons allow light to efficiently couple with surface plasmons, the collective excitation of electrons, in the graphene.

Surrounding the ribbons is gold film that funnels light to the graphene. Underneath is a Salisbury screen, which acts like a mirror that prevents light from escaping through the material, reflecting photons back into the graphene. The researchers designed the structure of this surface so that its impedance matches that of free space, which enables it to absorb all photons that come its way. "That's quite a dramatic result," Atwater said.

But by changing the voltage going through the graphene, the researchers can adjust how much it absorbs light. The graphene nanomaterial works in infrared wavelengths, so tunability could lead to all sorts of devices for controlling thermal radiation. In essence, Atwater explained, you could turn a black body into a white body with a flick of a switch.

Covering a building with this kind of material could provide a new way to control heating and cooling-by adjusting whether the building absorbs or reflects heat. "It's like a coat of paint I can change the color from black to white in the infrared," Atwater said.

The researchers have also used graphene to make a tunable phase modulator, which means that instead of simply reflecting thermal radiation, the surface can steer it toward a particular direction depending on the voltage. This paves the way toward beam-steering devices that can reflect infrared beams in any direction without the need for the slower, mechanically moving mirrors used in conventional beam steerers. 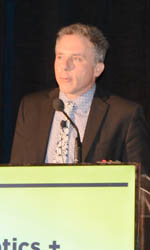 Atwater's group has already demonstrated a tunable phased array in the near infrared that scans at megahertz frequencies.

Next, Atwater hopes to control polarization of light in graphene. Perhaps farther in the future, when researchers have achieved even greater control and tunability, these kinds of devices could be used for 3D holographic images, he said. Such holograms would require both phase and amplitude modulation across multiple wavelengths.

Of course, graphene isn't the only 2D material out there. One of the newest is black phosphorous. Unlike graphene, which is a semimetal, black phosphorous is a semiconductor — and is tunable without the need for any additional engineering or nanopatterning.

For example, black phosphorous acts as a natural quantum well. By applying a voltage, you can tune the energy levels in that quantum well. It also has a different bandgap depending on how thick you make the material.

In a monolayer, the bandgap is 2 eV, but drops down to 0.3 eV in bulk. But because 2D black phosphorous is still so new, researchers like Atwater are just trying to understand and measure its properties, gauging potential applications.

Topological insulators are another class of promising 2D semiconducting materials. The defining characteristic of these materials, Atwater said, is a correlation between spin and charge. Like with black phosphorous, researchers are still exploring the properties of these materials.

For both black phosphorous and topological insulators, what may also be needed are discussions with industry experts to see exactly what applications these tunable 2D materials can be used for.

Looking in the nearer future, though, Atwater's team is developing new photovoltaic cells with sheets of materials such as MoS2 and WSe2 — as thin as 10 nm. Cells based on these materials are extremely efficient, absorbing nearly 100% of light. Being so thin and light, they could be useful for wearable technologies, vehicles, and other applications where weight is an issue.

Whatever the future holds, however, it seems 2D is here to stay.

SPIE Photonics West 2018 will be held 27 January through 1 February at Moscone Center.