The mission of the Large Synoptic Survey Telescope (LSST) is to meet a broad range of science goals with a single 10-year, time-domain survey. Over the course of the survey, LSST will deliver a more than 800-frame movie of 18,000 square degrees of the sky in six optical bandpasses.

In this plenary session, Beth Willman, Deputy Director of the LSST, gives an overview of the LSST Project and science goals, give updates on the construction progress towards first-light, and highlights ways for the scientific community to get involved now.

"It's hard to believe that it's been more than 20 years since LSST as a concept was a twinkle in Tony Tyson's eye when he was still at Bell Labs," Willman begins. "At that time, this concept for a telescope optimized for surveys was referred to as the Dark Matter Telescope." (Tyson is now Chief Scientist for LSST.)

In the 2010 Decadal Survey, New Worlds, New Horizons in Astronomy and Physics, the LSST was selected as the highest priority ground-based instrument for the coming decade. That ranking was necessary but not sufficient for the construction start for LSST, which did get greenlighted in 2014, as a collaboration between the Department of Energy (DOE) and the National Science Foundation (NSF).

A really critical part of LSST being where it is today is early seed funding from private donors including Charles Simonyi and Bill Gates that enabled the primary, tertiary mirror combination for LSST to be constructed for $20 million at the University of Arizona Mirror Lab in advance of the full start of the construction funding.

Willman describes LSST on the most basic level as being what you get when you put an optical camera on an 8-mm telescope, with a field of view the size of 40 full moons. Use this camera to take 1000 pictures of every area of the visible sky from the site outside of La Serena on Cero Pachón (Chile) over a ten-year period.

As an example shows a CAD image of the LSST camera, a DOE-funded construction project, with SLAC as the lead lab. "This 6000-lb camera is about the size of a Volkswagon Beetle car," says Willman.

She gives the audience a hands-on demonstration of what that 40-full-moon-sized field of view will be like. "My thumbnail held at arm's length is about the size of one full moon upon the sky. So if you hold your hand out and imagine about 40 of your thumbnails, that's the size of a single image that LSST will acquire. That FOV will be populated by 3.2 billion pixels and that 3.2 billion pixel focal plane will be read out in about 2 seconds."

LSST was designed around four key science pillars: taking an inventory of our Solar System, exploring the transient and variable optical sky, mapping the Milky Way and its neighborhood, and delving into the nature of dark matter and dark energy. LSST will be a super discovery machine for an enormous number and diversity of objects across these fields (including Near Earth Objects, distant supernovae, and ultra-faint galaxies) - discoveries that will transform our view of the universe for decades to come.

"Repeated observations of the sky will open up new windows into the changing universe, including millions of alerts on changes each night," says Willman. Each area visible at Cero Pachón, with quality air mass, will be imaged approximately 100 times over ten years, added up over the six filters. Researchers expect there will be about 1.5 million supernovae, catalogued and classified over the course of the LSST survey, as well as an enormous range of different types of both variable and transient stellar phenomena.

By talking repeated images of the sky, they won't just see how objects dim and fade in apparent brightness, but they will also be able to see how objects move across the sky from night to night and year to year. "This will open new windows into the past and future of our solar system, including identifying potentially hazardous objects," says Willman.

LSST's observing strategy will invest ~90% of its time in this wide-fast-deep survey, with a typical single visit depth of r = 24.7 mag. The remaining ~10% of the observing time will be used to obtain improved coverage of parameter space through Deep Drilling Fields or observations of "special" regions such as the ecliptic, Galactic plane, and the Large and Small Magellanic Clouds.

The LSST is a comprehensive facility that will include an optical telescope, wide-field camera, 6 broadband optical filters; a data management system to process, archive, and serve images and data products, and user interfaces.

"It's about to really get put together," says Willman, adding that the primary, secondary, and tertiary mirrors for the telescope were among the key components soon to be making their ascent. Her presentation includes images showing scaffolding in place to assemble the dome structure that will house the 8.4 meter-diameter primary mirror and the giant camera with the 3.2 billion-pixel sensor.

Ultimately, the decade-long survey - slated to begin October 1, 2022 - will catalog an extraordinary 40 billion objects. In doing so, it is expected to generate a colossal 20 terabytes of data every day, and some 15 petabytes overall. 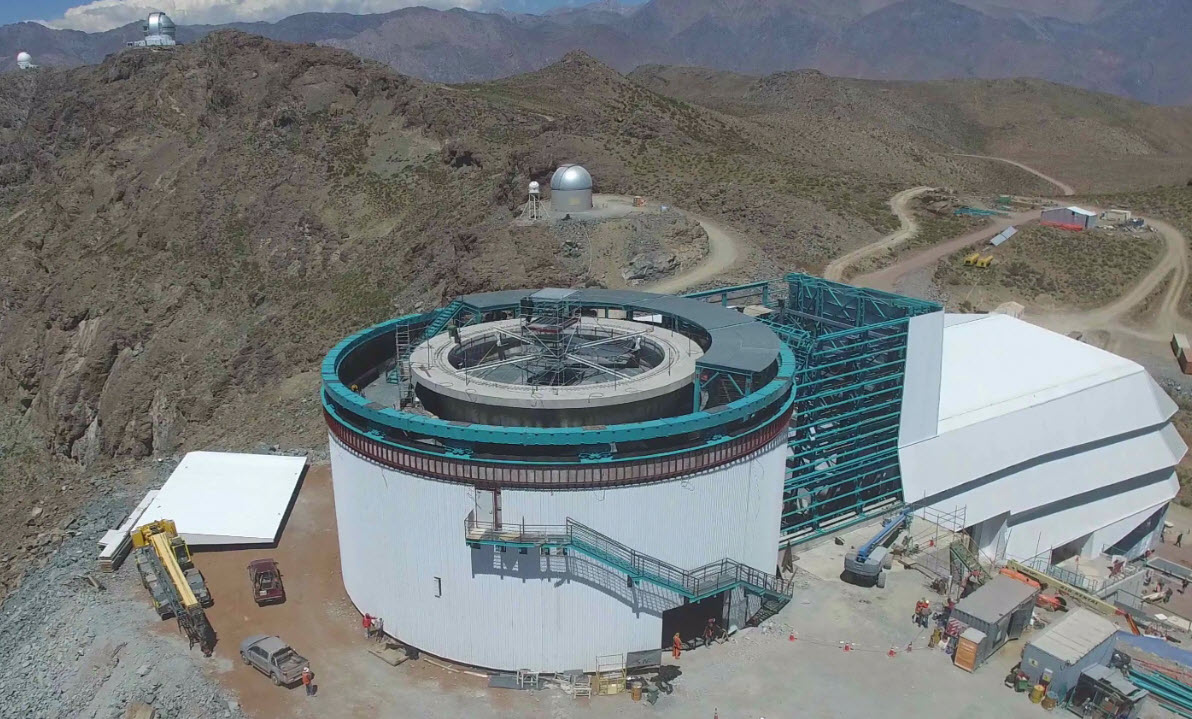 Beth Willman is the Deputy Director of the Large Synoptic Survey Telescope (LSST) and an Associate Astronomer at the University of Arizona. She earned her PhD from the University of Washington, and then held a James Arthur Fellowship at NYU's Center for Cosmology and Particle Physics and a Clay Fellowship at the Harvard-Smithsonian Center for Astrophysics. Prior to joining LSST, she spent 7 years in the Departments of Physics and Astronomy at Haverford College. Willman is known for her research in near-field cosmology, in particular her discovery of a new class of galaxies - ultra-faint dwarf galaxies.

Complex systems engineering for the Large Synoptic Survey Telescope
A rigorous new model-based systems approach improves the understanding of the telescope's functional behavior and interactions, and allows efficient operation of the observatory.