Planned for launch in 2019 on an Ariane 5 from French Guiana, the JWST will observe at wavelengths from 0.6 to 28 µm with a full suite of imagers, spectrometers, and coronagraphs. JWST will extend the discoveries of the Hubble and Spitzer observatories in all areas from cosmology, galaxies, stars, and exoplanets to our own solar system. With a 6.5 m primary mirror, the JWST has a collecting area 7 times that of Hubble and 50 times that of Spitzer. The image quality is diffraction limited at 2 µm with near IR camera pixels of only 0.03 arcsec.

Mather begins his talk by explaining to the audience, "We'll look at the Universe twice - once with light and once with imagination."

According to Mather, astrophysics is trying to answer questions such as what were the first objects that formed in the expanding universe? How do the galaxies grow? How are black holes made, ranging from stellar mass to supermassive, over a billion solar masses, and what is their effect on the neighborhood? How are stars and planetary system formed? What governs the evolution of planetary systems, with the possibility of life? How did the Earth become so special? But, he adds, "the most important discoveries will be those we have not even imagined today." 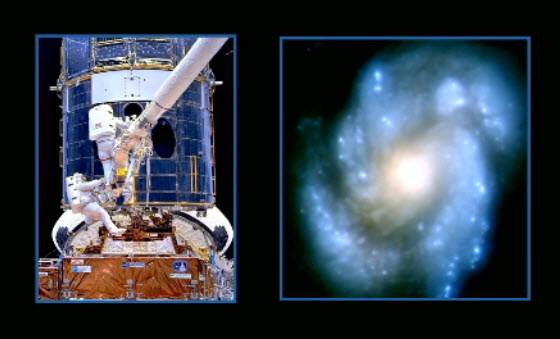 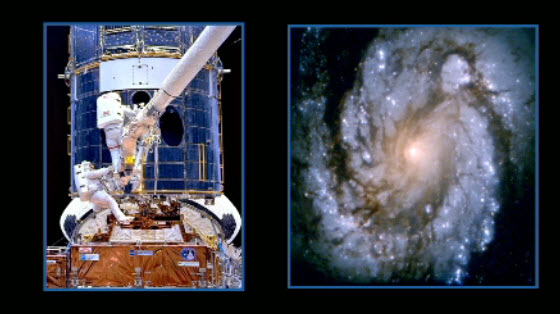 Comparison of early image from Hubble Space Telescope, and later image after repairs.

While discussing the history of telescopes, Mather mentions the Hubble Space Telescope (HST). Launched 28 years ago in 1990, the early results were disappointing, which led to repairs in 1993. In 1996, a report on ultraviolet-optical-infrared space astronomy titled HST and Beyond was published. "If you want to be inspired about the future of astronomy, read this book," says Mather. "It's poetic as well as a brilliant technical argument."

In explaining what we know so far about the universe, Mather points out that it started off very smooth and very hot, and "we know it's unstable." If you wait long enough, Mather says, you can see practically everything in our world is unstable . The idea that the sun always rises is partly because we have a shortened human time scale, we haven't had time to wait around for things to change. So when there's enough energy available, things become unstable and reorganized into different forms. Mather adds that the universe is very (very, very) large, probably infinite, "although I can't prove that to you."

"To summarize the story of the early universe, I have not drawn you a picture of an explosion, because no can do that," says Mather. "You can't stand outside the dimensions of the universe and look at the expanded universe as though it was a firecracker or an explosion. So what we actually see is completely the opposite of the firecracker. We see the entire universe expanding, which is to say the galaxies are rushing away from us. There seems to be no center and no edge, so it has an infinite universe expanding into itself. That means you can't fall off the edge, and an infinite universe is the only kind that can expand into itself."

In conclusion, Mather notes several upcoming milestones in astronomy including the Decadal Survey which takes place in 2020. Projects in the coming years include Euclid, WFIRST, LSST, E-ELT, SKA, and LISA among others.

Completing such projects is "hard to do," says Mather, "but not impossible." 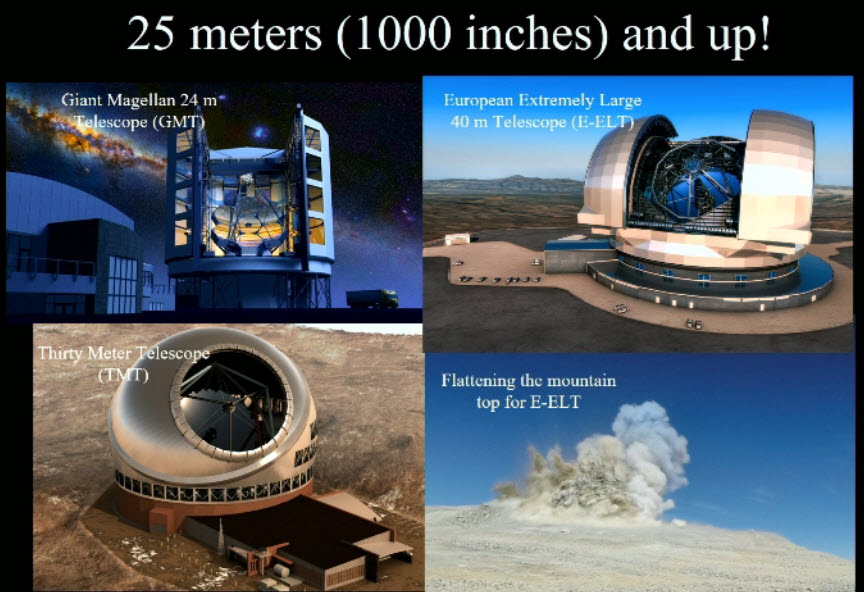 John Mather is the Senior Project Scientist for the James Webb Space Telescope (JWST). The JWST, planned for launch in 2018, will extend the discoveries of the great Hubble Space Telescope, reaching farther back in time, farther out into space, to show us how the expanding universe led to galaxies, stars, planets, and the possibility for life on our tiny Earth. As a 28-year-old postdoc he led the effort to propose the Cosmic Background Explorer satellite (COBE), and then served as its Project Scientist, leading the COBE team to success and to the Nobel Prize in Physics (2006). The COBE measurements started the era of precision cosmology, confirming the expanding universe theory to extraordinary accuracy. Dr. Mather speaks widely on the history of the universe and the astonishing possibilities of our shared future.