According to Adriano Camps, professor and director of the NanoSat Lab at Universitat Politècnica de Catalunya (UPC), space is currently experiencing a revolution. Large space agencies, multimillion dollar budgets, and big satellite missions have given way to a private companies, universities, and research centers, smaller budgets, and small satellites -- this NewSpace era is "democratizing" access to space.

Camps was a plenary speaker at SPIE Remote Sensing where he talked about CubeSat technologies, the nanosat program at (UPC), and results of the Federated Satellite Systems/3Cat (FSSCat) mission.

What are some of your primary responsibilities as at UPC NanoSat Lab?

Notably, I have first to look for funding, i.e., writing proposals, handling requests to perform tests in our facilities... Without funds, it is impossible to keep things moving, and the UPC NanoSat Lab does not receive any other types of financial support. I also contribute to the recruitment of students to participate in the projects. Finally, I oversee different activities, such as the 3Cat-4 project, selected by the European Space Agency (ESA) "Fly your Satellite!" program, and coordinate directly on some of the projects, such as FSSCat or the "Open PocketQube Kit."

What are some of the projects being worked on at the NanoSat Lab?

We have been involved in the development of the first four satellite missions in Catalunya, named generically "3Cat-" (1-4)." We have also developed a ground station at VHF, UHF and S-band frequencies at the Institut d'Estudis Espacials de Catalunya's Montsec Astronomic Observatory (IEEC's OAdM) to command some of these CubeSats, and to download the scientific data. Currently, we are developing an "Open PocketQube Kit" for the Institute of Electrical and Electronics Engineers/Geoscience and Remote Sensing Society (IEEE/GRSS) to support the educational activities and training on nanosatellite technologies, and to conduct simple scientific missions and tech demos.

Of those, which project(s) are you most excited about?

FSSCat, without any doubt. FSSCat, the first ESA Third Party mission based on CubeSats, is a satellite mission consisting of two six-unit cubesats carrying two instruments each: the Flexible Microwave Payload version 2 (FMPL-2) and the HyperScout-2. FSSCat won the 2017 ESA Sentinel Small Satellite Challenge and was overall winner in the 2017 Copernicus Masters Competition.

FSSCat represents the culmination of 18 years of work since I proposed the Passive Advanced Unit (PAU) instrument concept to combine L-band microwave radiometry and GNSS-R to improve the accuracy of sea salinity retrievals: microwave radiometry only was going to have a hard time by itself, because collecting sea state information was not easy. 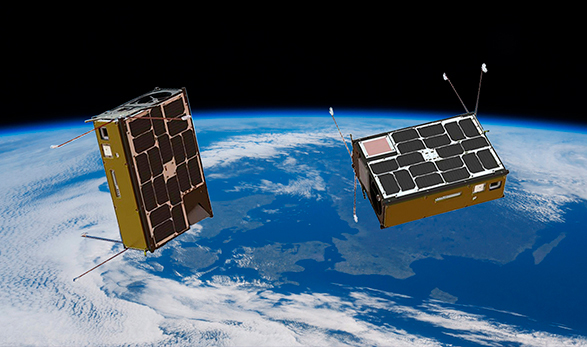 Recreation of two FSSCat CubeSats, dubbed ³Cat-5/A and ³Cat-5/B, orbiting the Earth as part of the FSSCat mission. Credit: UPC

FSSCat's first satellite is 3Cat-5/A (NORAD ID 46292) and it includes the Flexible Microwave PayLoad-2 (FMPL-2) developed by UPC. The FMPL-2 consists of a hybrid L-band microwave radiometer and GNSS-Reflectometer for soil moisture, sea ice, and sea salinity measurements.
FSSCat's second satellite is 3Cat-5/B (NORAD ID 46293) and it includes HyperScout-2, developed by Cosine. HyperScout-2 is a VNIR+TIR (visible and near infrared, and thermal infrared) hyperspectral imager and includes the PhiSat-1 experiment, the first artificial intelligence processor onboard a satellite.

Not only were the scientific and technological aspects a challenge, the short time allotted to implement the project was an issue as well. FSSCat was developed in just one and a half years. Tyvak International was in charge of the platforms and the integration of the payloads, the interface with the launch provider, and also the operations, while DEIMOS Engenharia was the administrative prime contractor and develop the Data Processing Ground Segment (DPGS) and data distribution center following the Copernicus free and open data policy.  So far, FSSCat has produced scientific-quality maps of sea ice concentration and extent, soil moisture, and sea surface salinity. Also, we count on ESA technical and programmatic advise and expertise, funding scheme, and access to ESA facilities.

Microwave remote sensing is a suite of techniques to measure properties of land, ocean, and atmosphere from a distance, using radio waves in the microwave frequency range.

Microwave radiometry is a passive microwave remote-sensing technique that measures the noise that is emitted naturally by bodies at a physical temperature different from 0 Kelvin. Microwave radiometers are like "radio receivers," but tuned to specific bands where there are no radio stations emitting, so they just measure the "volume" of the received "noise." Depending on the frequency, this volume is linked to geophysical parameters, such as soil moisture, wind speed, water vapor etc.

In your abstract, you mention the "democratization of space." How is this happening, and what do think the positive effect will be for the future of space exploration?

Democratization of space is a general term that refers to the fact that nowadays small companies, university labs, research centers and even some high schools can send and operate their own satellites or even satellite constellations. Space is no longer restricted to large companies or space agencies. It is opening new opportunities for business, both in telecommunications and Earth observation, and also for space exploration: cheaper satellites allow for continuous observations that are not possible with large and expensive observatories that have to share their observation time.

What led to your interest in telecommunications engineering?

I was always interested in radio and radio communications. I wanted to know more about this "mystery" of how radio waves propagate and are capable of sending information. I have also been attracted by space, so I have found a way to link both passions in my job.

As well as your research, you advise and mentor students. What do you enjoy most about that particular role, and what are the challenges in that role for you?

I am at the University because I like the interaction with students. Somehow they keep my mind fresh and active. There are several challenges today: On one side, curricula are shorter, so it is more difficult to go in depth, while research is becoming more and more complex — it is more interdisciplinary, requires larger teams, and technologically it requires many aptitudes.

On the other side, I think it is also becoming increasingly difficult to find committed students. We live in a society were everything has to be fast, relationships are short, and — in general — there is a lack of compromise. Space projects, even the NewSpace ones, take time to mature. Having said this, there are always outstanding students, and with the right team, everything is possible. Actually, one of the things I am more satisfied about FSSCat is that UPC's contribution has been conducted with graduate students.

At this time, what are the critical technological developments required to advance your field?

In the past decade we have seen the miniaturization of most remote sensors to fit in nano and microsatellites. In my opinion, in addition to the difficulties of accessing space, the main limitations today are: