Fluorescent plastic beads introduced into cells act as microlasers, thus enabling the identification of individual cells, including cancer and brain cells, that can be tracked from one generation to the next.
31 May 2017
Marcel Schubert and Malte C. Gather

The ability to track individual cells among the trillions that are present in the human body is critical to advancing our understanding of many important biomedical questions. For example, tracking individual cells could enable us to study the function of neuronal networks, follow the inflammation response of immune cells, and unravel the way in which circulating tumor cells contribute to the formation of cancer metastasis.

Among the techniques that have recently been developed to achieve single-cell resolution in tissue samples or whole animals, light sheet microscopy,1 transgenic labeling of cellular subsets,2 and genetic barcodes3 hold particular promise. However, as powerful as these methods are, they either rely critically on highly transparent samples, are strongly limited by the total number of unique cell tags, or are highly invasive.

We recently developed a radically different approach to track large populations of cells over extended periods of time.4 Our method is based on tiny fluorescent plastic beads that are placed inside of each cell. These beads have diameters of about 15μm and are made of polystyrene doped with a brightly fluorescent green dye. Natural phagocytosis has proven very efficient for transferring the beads into immune cells (macrophages), where they act as microresonators (that is, they trap and amplify light by forcing it onto a circular path along the circumference of the bead).4, 5

When optically pumped, the green dye in the beads provides optical gain that leads to the emission of laser light within the living cell, thus enabling their detection. Furthermore, because the emitted laser frequency depends critically on the size of the bead, inherent size variations create unique, barcode-like laser spectra (see Figure 1) that allow the identification of individual cells among thousands of other tagged cells. The number of unique tags could be increased by, e.g., optimizing bead size distribution or increasing the number of beads per cell. However, ensuring the robust and efficient internalization of microlasers by cells is a crucial prerequisite for the further development and application of our method. 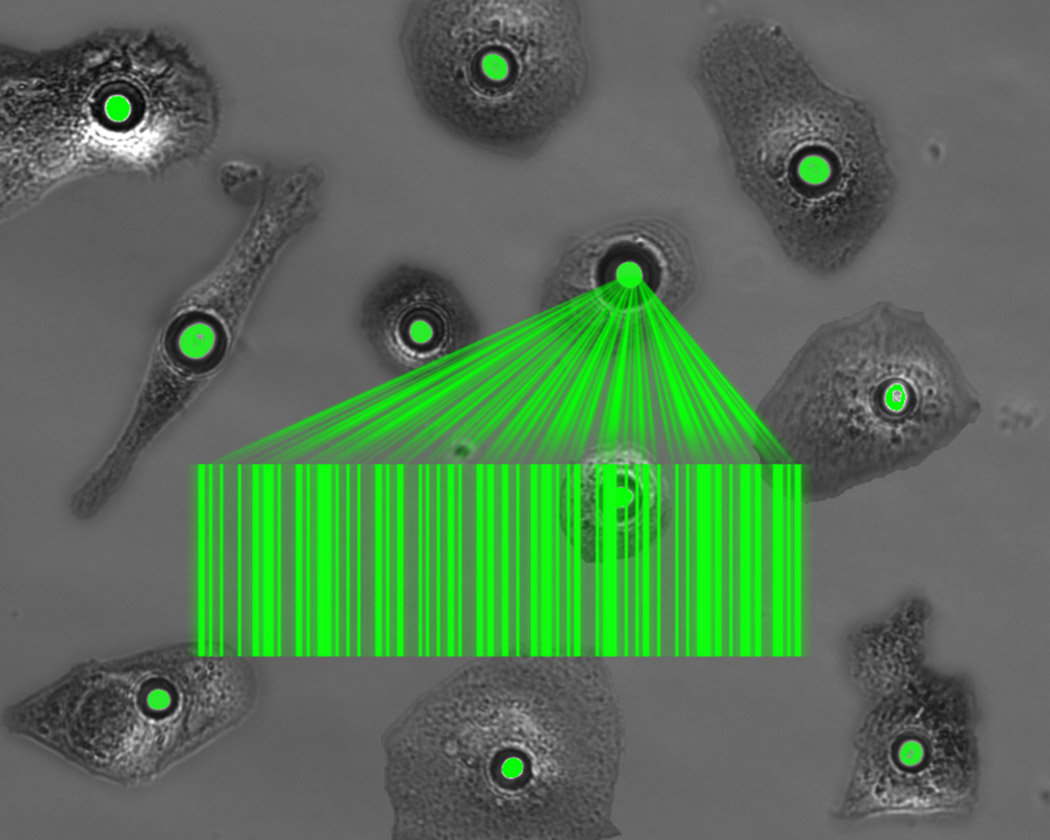 Figure 1. Representative montage showing the operation of our microscopic intracellular lasers. Microlasers (green spheres) located inside live cells provide optical barcodes that can be used to identify and track individual cells within large populations of cells.

More recently, we have described a high-throughput method for determining how many microlasers can be internalized by different types of cells (i.e., the laser-uptake efficiency). In so doing, we have found that a much wider range of cells can be targeted with intracellular lasers than previously assumed. This is surprising because many cells are thought to be non-phagocytic, meaning that they do not take up large objects naturally.6

For most cell types, including prototypic cancer cells and neuronal-like cell lines, we have found that coating the surface of the microresonator with a liposomal transfection agent (e.g., Lipofectamine TM 3000) significantly improves their uptake. This surface modification thus allows us to tag large numbers of cells—currently from several thousands to tens of thousands, with the possibility of scaling to larger numbers—within only a few hours. Importantly, we find that the microlasers remain internalized within the tagged cells not only during migration but also through the process of cell division, as shown in the time-lapse microscope images of fibroblast cells in Figure 2. The microlasers are thus transferred from one generation to the next, and we find that there are no notable changes to the lasing spectrum during this transfer (see Figure 2, right). Our results provide the basis for an extensive screening of compatible cells. Furthermore, given that cells maintained their usual properties—including cell cycle and typical migratory behavior—in our experiments, it appears that the presence of microlasers has only a minimal impact on the very complex processes inside cells. 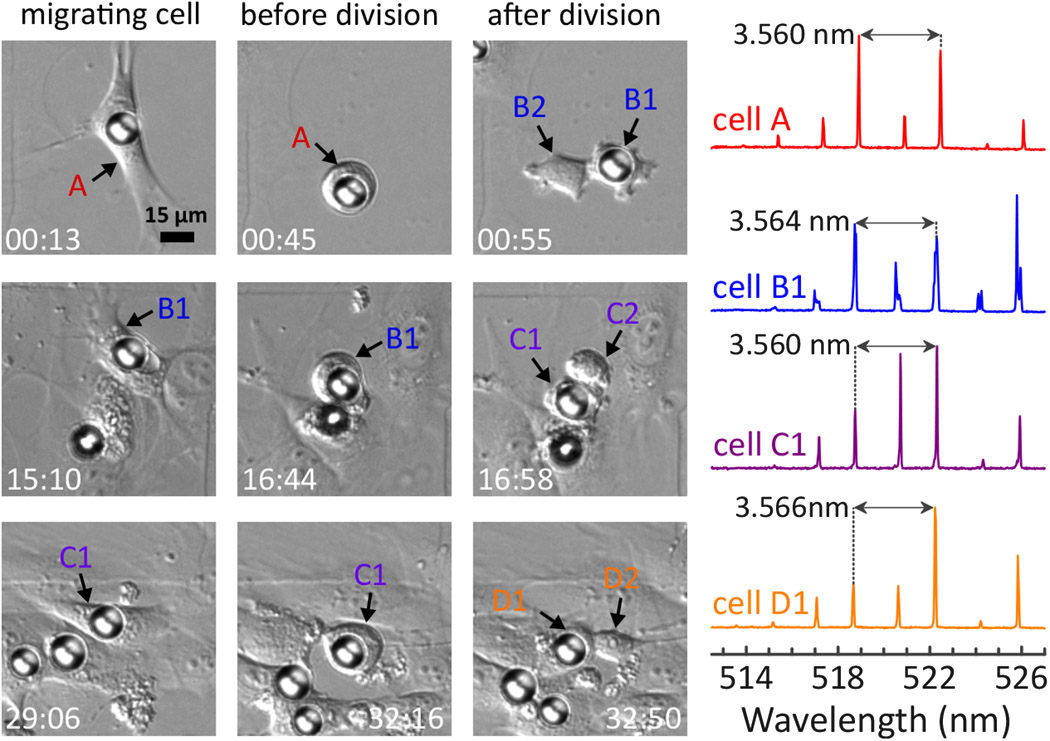 Figure 2. Microscopy images and lasing spectra depicting the tracking of fibroblast cells over several generations. The mother cell is denoted as A (red), and subsequent daughter generations are labeled with B (blue), C (violet), and D (orange), respectively. Left: Microscopy images of tagged cells before, during, and after three cycles of cell division. The times indicated in the images are in HH:MM. Right: Corresponding lasing spectra recorded during the migratory period of the cells. Arrows mark free spectral range between two neighboring transverse electric modes.

In summary, we have developed a novel biomedical tagging and tracking technique that is based on the introduction of small microlasers into individual cells. Furthermore, our approach enables tagging and tracking of individual cells over several generations. Although studies have thus far been limited to investigating lasing within cells in cell culture dishes, we plan to translate our method to the tissue or in vivo level, where long-term tracking of cells represents an even more urgent challenge. Intracellular lasers thus promise to advance knowledge of processes at the single-cell level in complex tissue environments, which is highly relevant to understanding the function of complex organisms and biological systems.

The authors thank Markus Karl for illustrations and acknowledge support from the ERC Starting Grant ABLASE (640012) and the Scottish Funding Council (via the Scottish Universities Physics Alliance). Marcel Schubert acknowledges funding by the European Commission through a Marie Skłdowska-Curie Individual Fellowship (659213).

Marcel Schubert, a Marie Curie Fellow, received his PhD in experimental physics from the University of Potsdam, Germany, in 2014 before joining the group of Malte C. Gather. His research interests range from biological and living lasers to organic optoelectronic materials and devices.

Malte C. Gather develops new photonic tools for the life sciences and performs fundamental research on the photonics of soft organic materials. He is most well-known for his Guinness World Record invention, the ‘living laser,’ and he currently develops various biocompatible and cell-implantable photonic devices based on this work.