Current efforts to mitigate climate change are largely focused on reducing carbon dioxide emissions. However, carbon dioxide will continue to be the primary driver of long-term temperature rise even if emissions drop to zero, a result of its long lifetime in the atmosphere (∼100 years). On the other hand, decreasing emissions of short-lived climate pollutants (SLCPs)—which have atmospheric lifetimes of less than 20 years—could play a key part in improving short-term climate effects over the next several decades.1 Here, we describe our recent progress in laser-based measurement of two major SLCPs: methane and black carbon.

Methane—the most important SLCP with an atmospheric lifetime of around 12 years—is considered the second most powerful climate-forcing agent (i.e., factor affecting Earth's climate) after carbon dioxide, but there are large uncertainties associated with current methane emission estimates and better methods of collecting and analyzing these emissions are required. Indeed, a recent study revealed that the US Environmental Protection Agency's inventory of greenhouse gases is under-counting total US methane emissions by roughly 50%.2

In 2013, we measured a time series of environmental methane concentrations at a suburban site in Dunkirk, France over a two-week period using direct absorption of laser radiation from a distributed feedback quantum cascade laser (QCL), operating at a wavelength of ∼8μm in a White-type multipass cell with a 175m effective path length (enabling highly sensitive measurement of low concentration samples).3 We observed a high methane concentration event of up to 3ppm on 17 January 2013: see Figure 1(a). This event was analyzed using the US National Oceanic and Atmospheric Administration (NOAA) hybrid single-particle Lagrangian integrated trajectory (HYSPLIT) model4 to perform a backward trajectory analysis (used to determine the origin of air masses)—see Figure 1(b)—combined with simultaneously measured time series concentrations of regulated gases (nitrogen oxides, carbon monoxide, ozone, and sulfur dioxide), water vapor, local meteorological data, and air quality monitoring data from a regional network (see Figure 2). We attribute the high variability in methane concentration over time at this site to air pollution transported by air mass from the local urban area and the nearby Lille district. 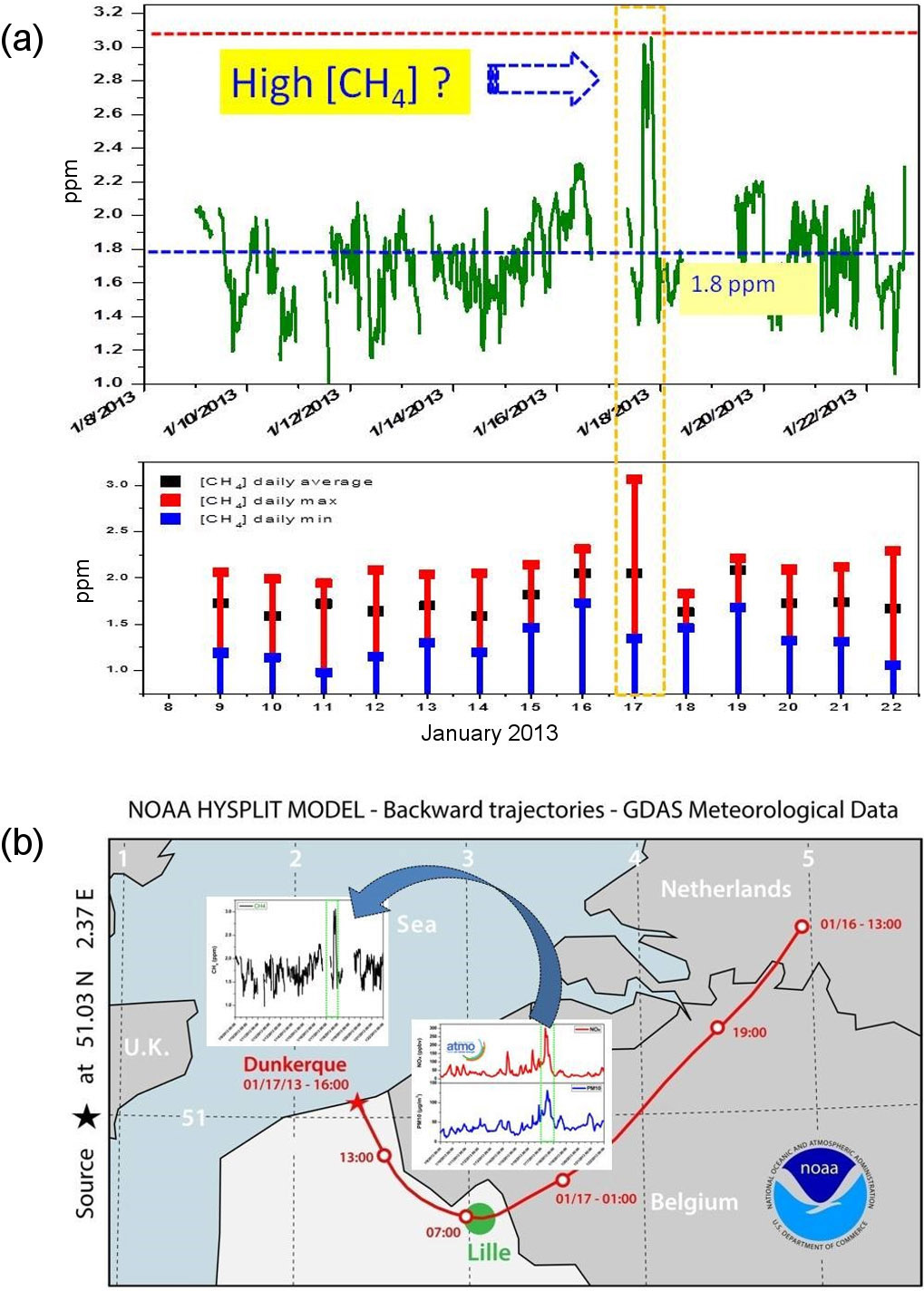 Figure 2. (a) The distribution of methane concentrations dependent on blowing wind sectors on 17 January 2013. (b) Graphs showing significant increases in levels of nitrogen oxides (NOx) and particulate matter ≤10μm in diameter (PM10) at ∼7am on 17 January 2013 in Lille (top) corresponding with the arrival of air pollution in Dunkirk at ∼4pm and the associated increase in CH4 concentration (bottom).

Livestock is currently responsible for 18% of greenhouse gas emissions—primarily methane and nitrous oxide—and these emissions are likely to rise as a result of the demands of increasing human populations. Thus, we employed a gas sensing platform based on an 8μm wavelength mid-IR external cavity QCL to simultaneously monitor methane and nitrous oxide emissions from ruminants in a stable over 10 days (see Figure 3) and observed, for example, methane concentrations ∼10 times higher than the natural atmospheric level. 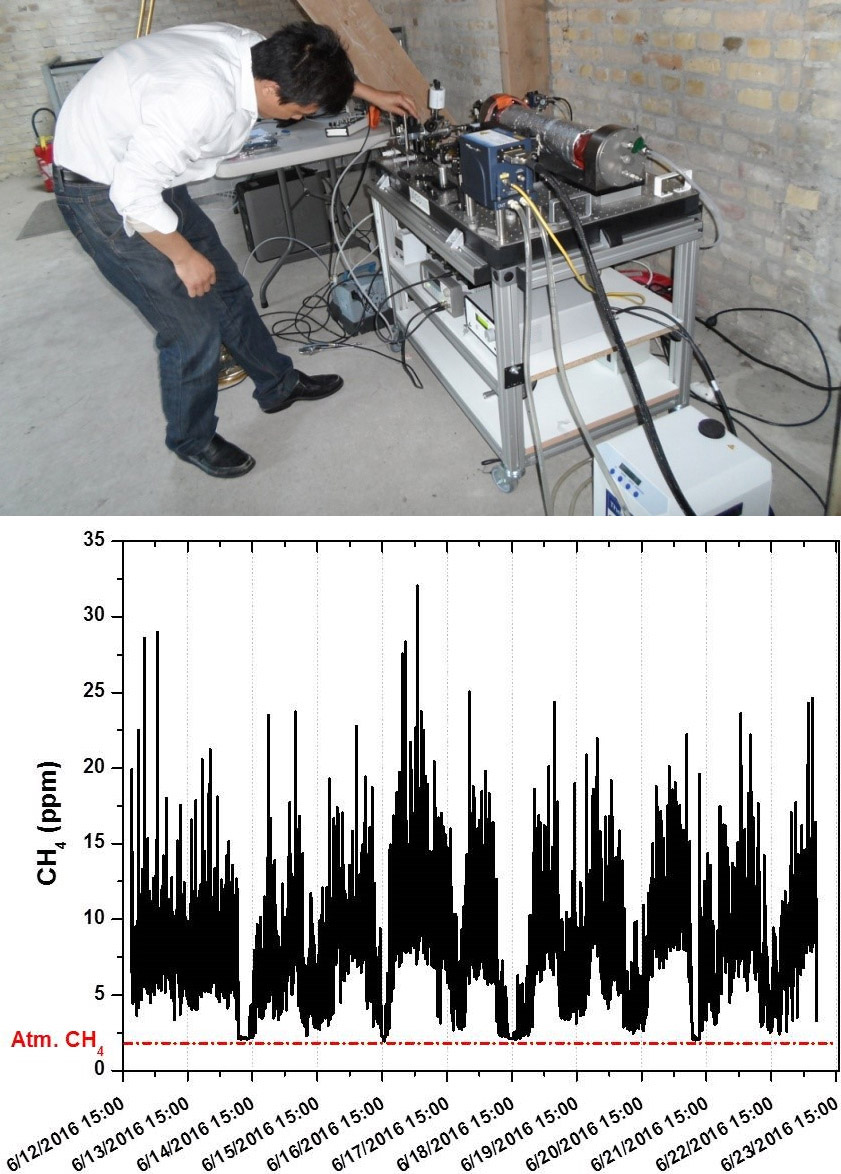 Black carbon—fine particulate matter with an atmospheric lifetime of about one week—is the second most important SLCP after methane5 and has been identified as the air pollutant most harmful to human health.6 The uncertainties associated with the climate-forcing effects of black carbon are currently greater than 70%, which is primarily a result of the measurement techniques used. Such large uncertainties can confuse our understanding of trends, spatial and temporal variability of BC, and its impact on the climate.

To address this issue, we developed a photoacoustic spectrophone—in which light absorbed by a sample is converted to sound waves—for filter-free direct measurement of the mass absorption coefficient (MAC) of black carbon using a 600mW blue diode laser operating at wavelength of ∼444nm (see Figure 4).7 Along with measurements of black carbon sizes and concentrations, a MAC of 11.54±1.21m2/g at 444nm was determined for a standard black carbon reference, which is in good agreement with the reported value of 9.1m2/g at 532nm (MAC values follow a wavelength-dependent power-law).8 We have also applied our photoacoustic spectrophone to MAC measurement of volcanic ash from the Eyjafjallajökull volcano in Iceland—in which a high-precision MAC of 0.050±0.004m2/g at 444nm was obtained, in good agreement with the value of 0.040–0.058m2/g obtained using a filter-based optical reflectance method9—and optical monitoring of secondary organic aerosol formation through photolysis of 2-nitrophenol in a simulation chamber.

In summary, we have developed laser absorption spectroscopy methods to monitor atmospheric levels of methane and black carbon. This work shows that monitoring environmentally active SLCPs is important not only for policy-based reporting and mitigation decisions, but also for understanding their sources and sinks, and climate-related processes in the atmosphere. Our future work with SLCPs will include developing methods to measure vertical concentration profiles, flux (to study budgets, variability, and trends), and isotopic compositions (to understand their origin, evolution, and dispersion in the atmosphere).

The authors acknowledge the collaboration of Denis Petitprez's group at Lille University of Science and Technology.