A novel fabrication procedure is used to produce flexible devices that include inorganic semiconductor nanowires and that can compete with organic devices in terms of brightness.
03 May 2017
Nan Guan, Xing Dai, Joël Eymery, Christophe Durand and Maria Tchernycheva

Nitride LEDs are coming to replace other light sources in almost all general lighting, as well as in displays and life-science applications. Inorganic semiconductor devices, however, are naturally mechanically rigid and cannot be used in applications that require mechanical flexibility. Flexible LEDs are therefore currently a topic of intense research, as they are desirable for use in many applications, including rollable displays, wearable intelligent optoelectronics, bendable or implantable light sources, and biomedical devices. At present, flexible devices are mainly fabricated from organic materials. For example, organic LEDs (OLEDs) are already being used commercially in curved TV and smartphone screens. However, OLEDs have worse temporal stability and lower luminescence (especially in the blue spectral range) than nitride semiconductor LEDs. Substantial research efforts are thus being made to fabricate flexible inorganic LEDs.1

The conventional approach for flexible inorganic LED fabrication consists of number of steps, i.e., layer lift-off, microstructuring, and transfer to plastic supports. To avoid the microstructuring step and facilitate the lift-off, it is advantageous to shrink the active element dimensions and to use bottom-up nanostructures (such as nanowires, NWs) rather than 2D films. These NWs—i.e., elongated nanocrystals with a submicrometer diameter—have remarkable mechanical and optoelectronic properties that stem from their anisotropic geometry, high surface-to-volume ratio, and perfect crystallinity. In addition, such NWs are mechanically flexible and can withstand high levels of deformation without suffering plastic relaxation.

Efficient LEDs that include nitride NWs have previously been demonstrated, and in our work,2 we make use of nitride NWs as the active material for flexible LEDs. Our polymer-embedded NWs offer an elegant solution to create flexible optoelectronic devices in which we combine the high efficiency and long lifetimes of inorganic semiconductor materials with the high flexibility of polymers. In our devices, the NW arrays—which are embedded in a flexible film and can be lifted-off from their native substrate—can sustain large deformations because of the high flexibility of the individual NWs. Furthermore, the footprints of individual NWs are much smaller than the typical curvature radius of LEDs (i.e., on the order of a few millimeters or more).

In our approach, we used catalyst-free metal-organic chemical vapor deposition (MOCVD) to grow self-assembled gallium nitride (GaN) NWs on c-plane sapphire substrates.3 These NWs (with lengths of about 20μm and radii of about 0.5–1.5μm) have core/shell n–p junctions into which we incorporate multiple radial indium gallium nitride (InGaN)/GaN quantum wells. We control the emission color by changing the indium concentration of the InGaN emitting layer. In our actual device fabrication process4—see Figure 1(a)—the NW array is embedded into the polydimethylsiloxane (PDMS), peeled-off from the sapphire host substrate, and we then flip the composite NW/polymer membrane onto an arbitrary substrate to conduct the metal back-contacting. We subsequently flip the layer again and mount it on a flexible substrate (a metal foil or plastic), at which point we front-contact it with a flexible and transparent electrode. For the front contact we chose a silver NW mesh—see Figure 1(b)—which is characterized by mechanical flexibility, good electrical conductivity, and optical transparency.

Figure 1. (a) Schematic illustration of the fabrication process for flexible LEDs that are based on a vertical nitride nanowire (NW) array. Ni: Nickel. Au: Gold. Ti: Titanium. (b) Scanning electron microscope image of the spin-coated silver (Ag) NW network on the polydimethylsiloxane (PDMS)/NW membrane. This silver NW network is used to form the transparent top-contact of the device. The protruding LED NWs are circled in red.

We have used this technological procedure to fabricate blue and green flexible NW LEDs.4 We find that our devices exhibit typical behavior for nitride NW LEDs, i.e., with a light-up voltage of about 3V. Moreover, our LEDs can be bent to a curvature radius of ±3mm without any degradation of their electrical or luminescent properties. Photographs of our NW LEDs under operation in flat conditions, and during upward or inward bending are shown in Figure 2. Our flexible NW LEDs also have reasonable stability over time, unlike conventional OLEDs. Indeed, storing our devices in ambient conditions for several months does not cause their properties to degrade, whereas the lifetime of an OLED without encapsulation is limited to only several hours. 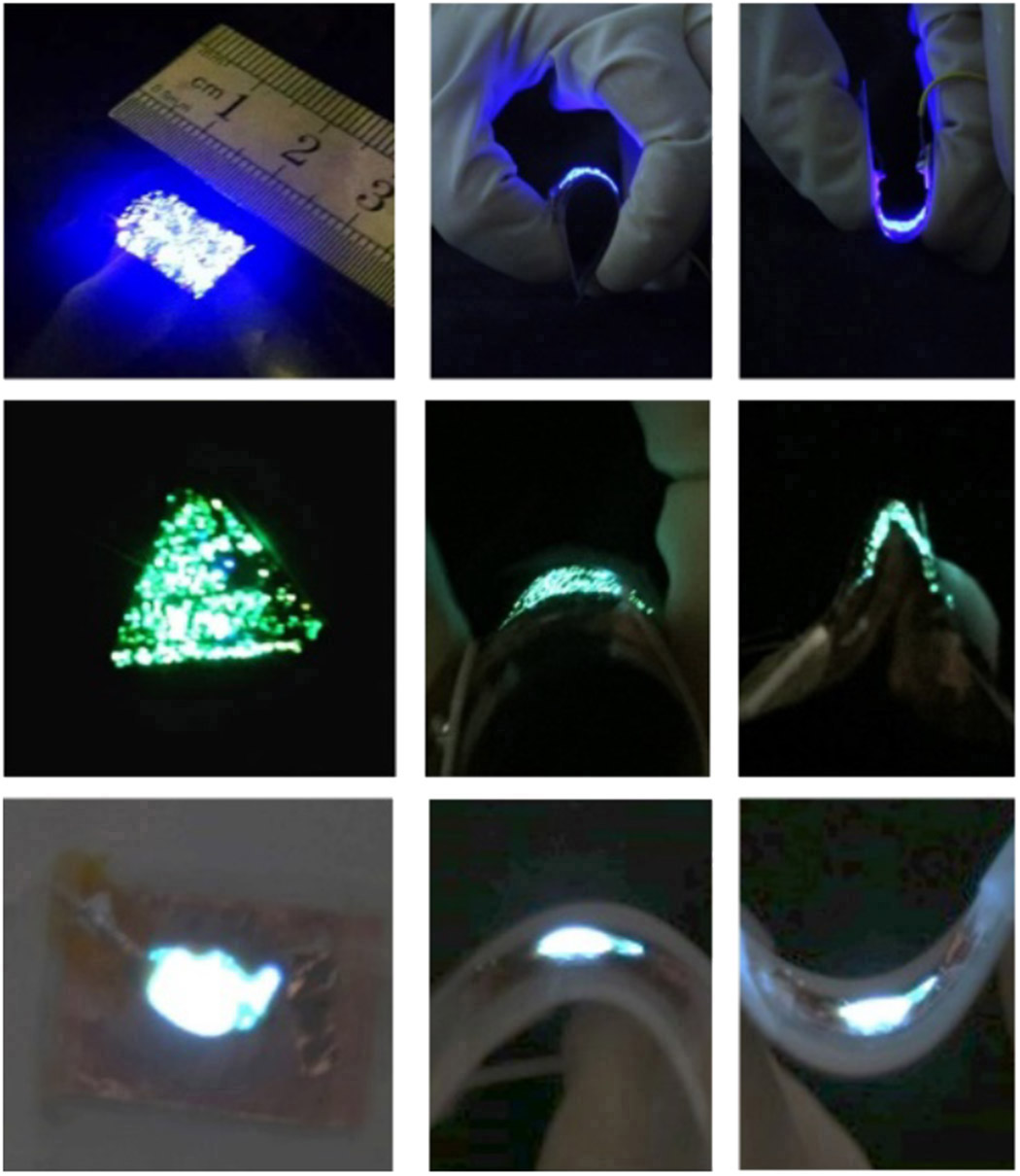 We have also used our composite NW/polymer membrane architecture to realize a flexible white LED (see Figure 2). To achieve this device we follow the standard approach of down-converting blue emission with yellow phosphors, i.e., to get white light from a blue–yellow mixture. To adapt this scheme for our flexible NW LEDs, we added yellow cerium-doped yttrium aluminum garnet phosphors into the PDMS layer between the NWs and covered the surface with an additional phosphorous-doped PDMS cap.5 The phosphor particles we use are smaller than 0.5μm so that they can fill the gaps between the NWs. The light that is emitted by the NWs is thus partially converted by the phosphors from blue to yellow, and we achieve a broad spectrum (covering almost the full visible range).

Our NW membrane lift-off and transfer procedure allows free-standing layers of NW materials with different bandgaps to be assembled without any constraints relating to lattice-matching or compatability of growth conditions. Our approach therefore provides a large amount of design freedom and modularity, i.e., because it enables materials with very different physical and chemical properties to be combined (which cannot be achieved with monolithic growth). We made use of this modularity to demonstrate a two-color device, in which we combined two flexible LED layers that contain different active NWs: see Figure 3(a). In this device, we mounted a fully transparent flexible blue LED on top of a green LED. We were able to bias the two LEDs separately by producing either blue or green light, or by simultaneously producing a light mixture. We show the electrolumniscence spectra from the different layers of this bicolor flexible LED in Figure 3(b). 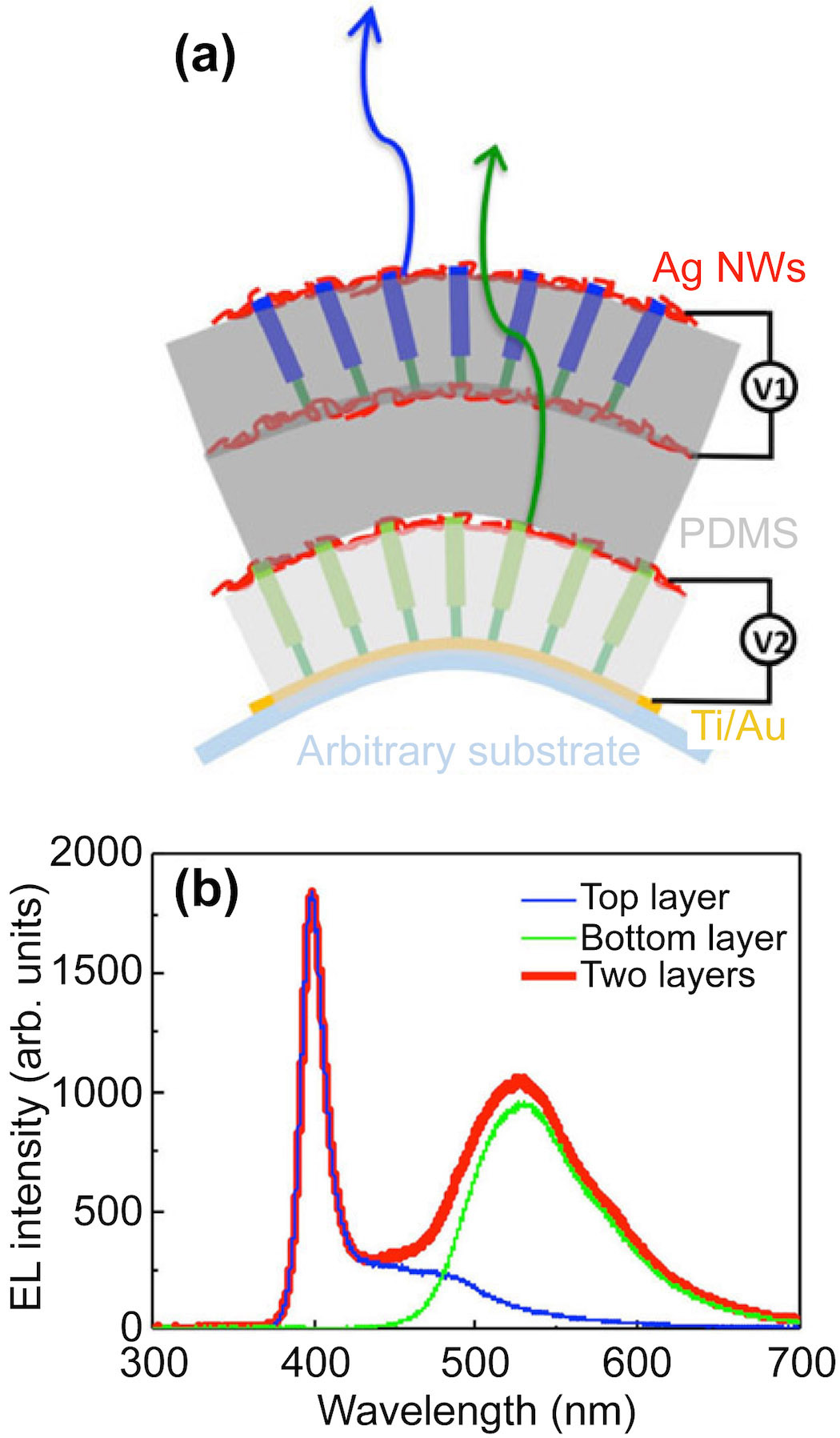 Figure 3. (a) Schematic illustration of a blue-green two-color flexible NW LED, in which a fully transparent blue LED is mounted on top of a green LED. The two LEDs are biased separately (i.e., V1 and V2). (b) Electroluminescence (EL) spectra (in arbitrary units) of the two-color flexible NW LED. The blue, green, and red curves show the emissions from the top layer, bottom layer, and both layers together (biased simultaneously), respectively.

In summary, we have successfully demonstrated a new procedure for the fabrication of efficient, flexible nitride NW LEDs. In our approach, we embed GaN NWs within a PDMS membrane and have realized blue, green, and white LEDs that exhibit good bending, electrical, luminescent, and temporal stability characteristics. The modularity of our technique means that we can also produce bicolor devices in which one LED is mounted upon another. Our approach thus opens up new routes to achieving efficient flexible LEDs and other optoelectronic devices, such as red-green-blue flexible LEDs or displays, flexible NW-based photodetectors6, or solar cells. In our future research we will concentrate on improving the efficiency of our flexible light-emitting devices, which is not yet comparable to that of commercialized rigid thin-film LEDs. We will also try to integrate the flexible light sources into life-science applications.

This work has been financially supported through the 'PLATOFIL' project (ANR-14-CE26-0020-01), the EU H2020 ERC ‘NanoHarvest’ project (grant 639052), and by the French national Labex GaNex project (ANR-11-LABX-2014). The device fabrication was performed at the Centrale de Technologie Universitaire's Institut d'Electronique Fondamental (CTU-IEF) Minerve technological platform, which is a member of the Renatech Recherche Technologique de Base network.

Nan Guan is a PhD candidate in physics. He received both his master's and engineering degrees in optics from Université Paris-Saclay, France, in 2015. His current research interests include nanofabrication, characterization, and optical simulations for nitride nanowire LEDs.

Xing Dai received her PhD in applied physics from Nanyang Technological University, Singapore, in 2014. During her time as a postdoctoral researcher at Paris-Sud University, she focused on flexible nanowire LEDs. She is currently a process-development engineer at Almae Technologies.

Maria Tchernycheva received her PhD in physics from Paris-Sud University in 2005. She joined CNRS in 2006, where she currently leads the ‘NanoPhotoNit’ research group. Her research focuses on the fabrication and testing of novel optoelectronic devices that are based on semiconductor nanowires.

Joël Eymery obtained his engineering degree, PhD, and habilitation from Université Grenoble Alpes, France, and now leads CEA's Nanostructures and Synchrotron Laboratory. His research is focused on the development of nanowire physics, including metal–organic vapor-phase epitaxy growth of nitride compounds, structural and optical characterization, and the development of nanodevice demonstrators.

Christophe Durand received his PhD in physics from the Université Joseph Fourier, France, in 2004. Since 2006, he has been an associate professor at the Université Grenoble Alpes. In his research, he focuses on the synthesis of novel III-N nanostructures by metal–organic vapor-phase epitaxy to develop new optoelectronic applications.