Electrons interacting with metamaterials: from few-photon sources to electron optics

Precisely designed metamaterials and nanostructures interact with electron beams to mold the flow of photons in a way that can be further exploited by advanced time-frequency analysis.
02 August 2017
Nahid Talebi

Controlling the trajectory of moving electrons by means of highly efficient aberration-corrected magnetic lenses1 has paved the way toward ultrahigh resolution microscopy and diffraction. Additionally, the advent of ground-potential monochromators has pushed electron spectroscopy into a new era (i.e., where electron energy-loss spectroscopy achieves an unprecedented energy resolution, as high as a few meV).2 Moreover, teaming up electron guns and lasers has enabled a number of new technologies, including ultrafast characterization of optical near fields,3 dielectric laser accelerators,4, 5 and photon-induced near-field electron microscopy.6

As in optics, ultrafast electron microscopy could be further advanced by exploiting time-frequency analysis.7 An example of methods that could stand to benefit from this approach are interferometry techniques, which provide unprecedented knowledge of the spatial profile of electron-induced optical near-field and electronic states in the time-energy phase space. Such insight could enable an understanding of the transition between states and of temporal evolutions (e.g., dephasing). To achieve this in optical studies, the time resolution has generally been increased (i.e., to the attosecond era). This is not feasible with today's photoemission electron guns, however, due to time jitter.

We have developed a new technique for overcoming these shortcomings by enabling the electron to create its own conjugate photons.8 A fast electron (i.e., traveling at 70% of the speed of light) can interact with a precisely designed metamaterial-based electron-driven photon source (EDPHS) to create broadband, coherent, and focused transition radiation: see Figure 1. 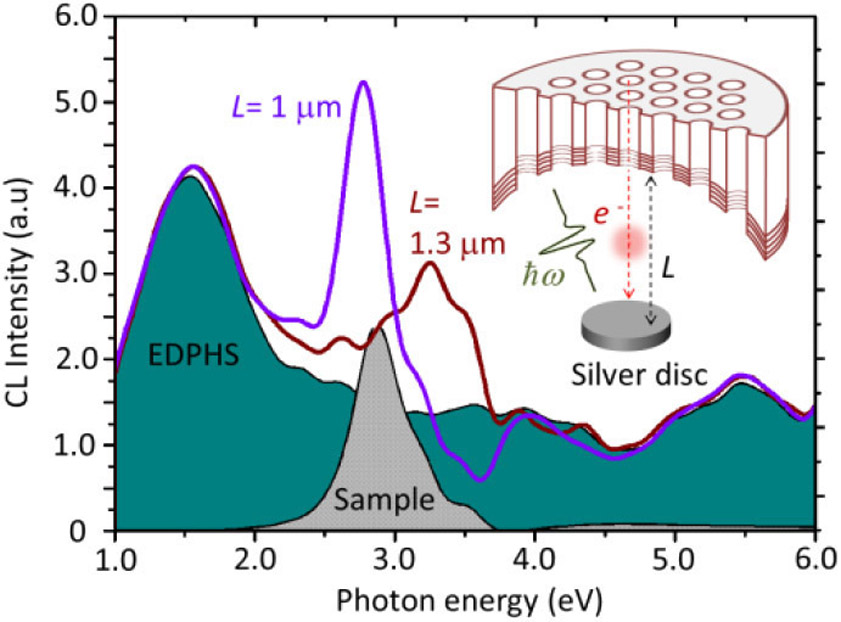 Figure 1. A fast electron interacting with the electron-driven photon source (EDPHS) can create an ultrafast optical pulse with an energy range of 1–6eV. The EDPHS emission can excite the sample (here a silver disc) and interfere with the electron-induced excitations in the sample. e-: Electron. ℏω: Photon energy.

To achieve this, we position a sample at a certain distance from the EDPHS along the trajectory of the electron: see Figure 2(a). Electron-induced polarization in the sample can interfere with the EDPHS-induced polarization in either a constructive or destructive way, depending on the distance between the sample and the EDPHS (L). In other words, because the emission from the EDPHS propagates at the velocity of light and the electron is slower, we can control the delay between the electron-induced and EDPHS-induced polarizations in the sample by tuning L. We then detect distance-energy interference maps using either a cathodoluminescence or an electron energy-loss detector, as shown in Figure 2(b) and (c), respectively. The difference between these two spectra arises due to the dissipation loss in materials.9 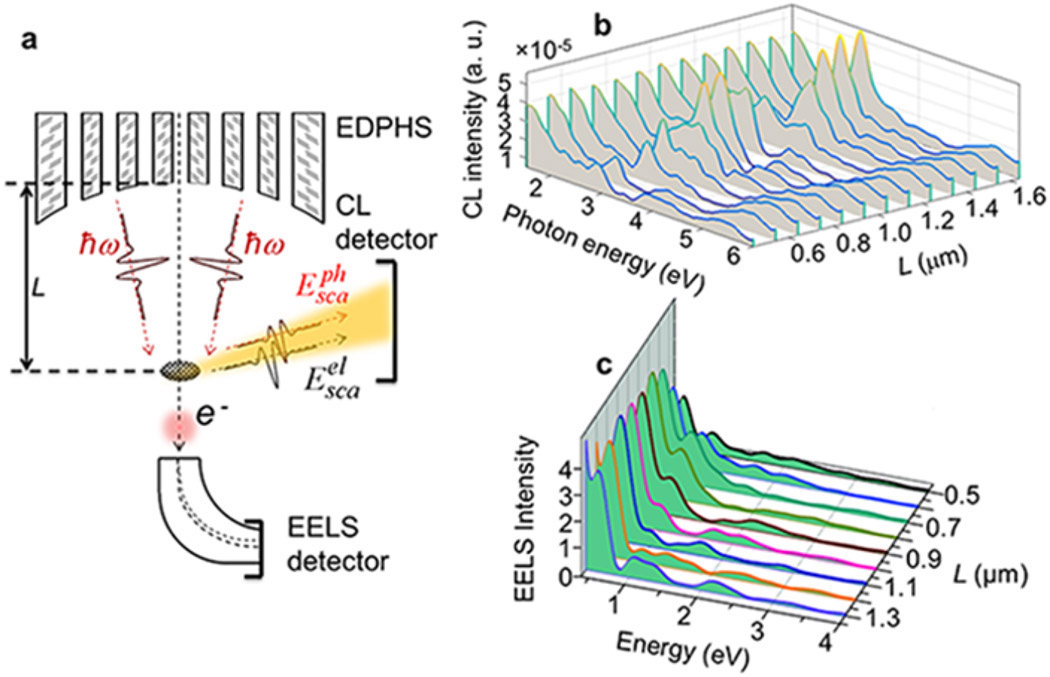 Figure 2. Spectral interferometry with electron microscopes. (a) A fast electron interacts with a metamaterial-based EDPHS and emits an electromagnetic pulse that is mutually coherent with the near field of the electron itself. The radiation from the EDPHS is then focused on the sample, which is located at a distance L from the EDPHS. The EDPHS radiation can interfere with the electron-induced radiation of the sample. Because the emission from the EDPHS can travel faster than the electron in free space, the delay between the EDPHS and the sample is precisely controlled by tuning L. A full interference map is acquired by either (b) cathodoluminescence (CL) or (c) electron-energy-loss-spectroscopy (EELS) detectors, from which the spectral phase can then be extracted. Ephsca: Photon-induced scattered radiation. Eelsca: Electron-induced scattered radiation. a.u.: Arbitrary units.

The time-energy correlation function can be extracted from the interference map and subsequently used to recover the spectral phase of the electron-induced polarization in the sample. Depending on its design, the radiation from EDPHS can be only a few femtoseconds, which provides us with an ultrafast characterization technique comparable with those recently achieved using optical methodologies, but with much better spatial resolution.

In an inverse approach, laser-induced near fields produced by optical gratings can be used not only to accelerate the electron beams,10 but also to shape them into bunched packets. Such interaction is called the inverse Smith-Purcell effect.11 Bunched electron beams have a number of fascinating properties, including coherent superradiant emission.12 Interestingly, a combination of photoemission electron guns and grating-based laser accelerators has also recently been proposed as a platform for a simple and highly efficient electron source.4 However, the quantum-mechanical effects in such structures have not yet been fully explored.

Recently, we have developed a self-consistent numerical method within the Maxwell-Schrödinger framework to simulate the interaction of electron wave packets with light and nanostructures.5 In our approach, we consider a chirped symmetric silicon grating in which the chirped parameter has been designed in such a way as to maintain synchronization between the excited optical modes and the electron wave packet. Our simulation of the interaction between an initially Gaussian electron wave function with a chirped grating is shown in Figure 3, where the spatiotemporal evolution of a single electron wavepacket propagating through the grating is depicted. Videos of these simulations, which show the radiation from the electron interacting with the grating as well as the space-time evolution of the electron wavepacket, are available online.13, 14 Interestingly, these simulations demonstrate that dielectric laser accelerators can be used for efficient shaping of single-electron wavepackets. Moreover, the result is quite different from Smith-Purcell spontaneous radiation (i.e., where a wide range of energy and angular momentum distribution is expected). In the case of the inverse Smith-Purcell effect, stimulated radiation from the electron itself resembles the specifications of the laser beam, such as its wavelength and polarization state. 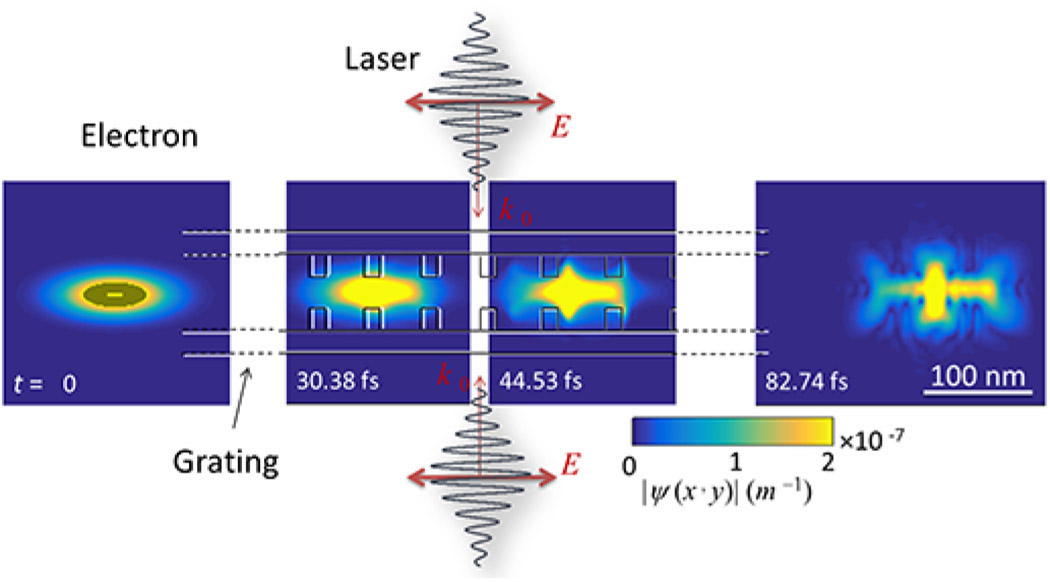 Figure 3. Images showing a simulation of an initially Gaussian electron wave packet, Ψ(x, y), traveling at 4% of the velocity of light along the symmetry axis of a chirped silicon grating. The grating is illuminated symmetrically with two laser pulses (E) at carrier wavelengths of 830nm with a peak electric field amplitude of 0.5GVm-1, and with a broadening of 80fs at full width half-maximum. The evolution of the wavepacket is shown after a time (t) of 0, 30.38, 44.53, and 82.74fs. k0: Wavenumber associated with the carrier wavelength of the optical pulse.

In summary, we have proposed and numerically investigated new methodologies for spectral interferometry and electron-beam shaping using conjugate electrons and photons. Our results demonstrate that controlling the interactions of fast electrons with light, metamaterials, and nanostructures at the extreme level (i.e., where the electron's self-field is mutually coherent with its conjugate photons) opens up new avenues in electron microscopy and acceleration science. For example, our findings could enable advancements in dynamic electron optics and time-energy characterization techniques, and may also enable shaping of electron beams. Our work could thus prove beneficial in understanding the behavior of photonic and solid-state systems, and could help in engineering the evolution of optical and electronic states in the time and energy domain. In the future, we will further employ our findings to achieve coherent control of the electron wave function (into a desired shape), and to exploit shaped-electron and photon excitations to obtain quantum coherent control over solid-state systems.

Nahid Talebi is a scientist whose work focuses on the fields of numerical electrodynamics, electron-light interactions, plasmonics, and nanophotonics. She has published more than 34 peer-reviewed articles, has filed two patents, and has given numerous invited talks and tutorials.