A new approach enables the fast simulation of chip-scale imprinting, helping to co-optimize layout designs and processing parameters for acceptable yield and throughput in memory manufacturing.
29 May 2017
Hayden Taylor

Among emerging nanopatterning techniques, nanoimprint lithography (NIL) is especially promising because the equipment required is relatively inexpensive. In NIL, a patterned template mechanically deforms a polymer film or resin on the surface of a semiconductor wafer (as shown in Figure 1) to transfer features and create an etching mask for subsequent processing. The prospect of reduced patterning costs enabled by this technique (compared with, for example, extreme-UV lithography) is particularly attractive to manufacturers of NAND flash memory, i.e., the predominant form of non-volatile memory used in electronic devices today. NAND flash memory does not require power to store data and is the key component of solid-state hard disk drives and camera memory cards. Nonetheless, to increase its adoption, it is crucial to reduce the cost per bit and, for this reason, there is an exceptionally strong incentive to reduce manufacturing costs.

Figure 1. Schematic illustration of nanoimprint lithography, using a droplet-dispensed resin.6(1) A patterned quartz template is bowed and brought into contact with inkjet-dispensed pL-volume resin droplets on the wafer. (2) The curvature of the template is then relaxed to spread droplets and fill cavities. (3) After a dwell period (to enable residual layer homogenization), the resin is cured by UV exposure through the template.

NIL is a promising approach for realizing a reduction in NAND flash manufacturing costs, but there are a number of associated challenges. For example, it is particularly difficult to achieve good inter-layer alignment and template lifetimes, and to minimize the pattern defectivity. Defectivity is the issue most in need of process modeling. There are two contributors to defectivity: random contributions (including particles or spatial errors in the dispensing of resin droplets onto the wafer); and systematic contributions, e.g., incomplete template-cavity filling, variation of the resin's residual-layer thickness (between the template and the substrate), and template–resin adhesion.

To ensure the successful use of NIL for fabricating NAND flash memory, it is necessary to predict any voids that may arise beneath the template after the dispensed droplets have spread and coalesced, and to correct these by layout or process optimization. Many semiconductor devices include more than a billion geometrical features and more than 10,000 droplets in any imprinting cycle. New approaches to mechanical modeling and computation are therefore required to design such devices for manufacturing purposes. Previously developed methods for simulating the imprinting of thermoplastic films1 and UV-curing resin droplets2 involve finite-element modeling. However, these approaches generally require all feature geometries to be individually represented in a mesh, which makes them computationally impractical for full-chip simulations. Coarse-grain and multiscale finite-element approaches have also been proposed3, 4 (e.g., modeling the patterned template layer as a porous shell), but these approaches are yet to be proven at the full-template scale.5

We take a different approach, and our NIL simulation technique6 is scalable to full template designs that have more than 10,000 merging droplets. We represent the simulation region on a 2D square grid, in which each grid element is finer than a droplet diameter yet contains many nanoscale template features. Additionally, we describe the viscous behavior of the resin by using an ‘impulse response,’ i.e., a 2D function that models how the surface profile of a film of resin would evolve if loaded in a single location for a short period (see Figure 2). The impulse response is locally modified with an anisotropy parameter, which captures the degree of directionality of resin spreading along parallel features on the template. We can calibrate this parameter with the use of feature-level simulations or through experiments. The slight template and wafer deflections that occur under the imprinting pressures are captured with a dedicated spatial-response function. 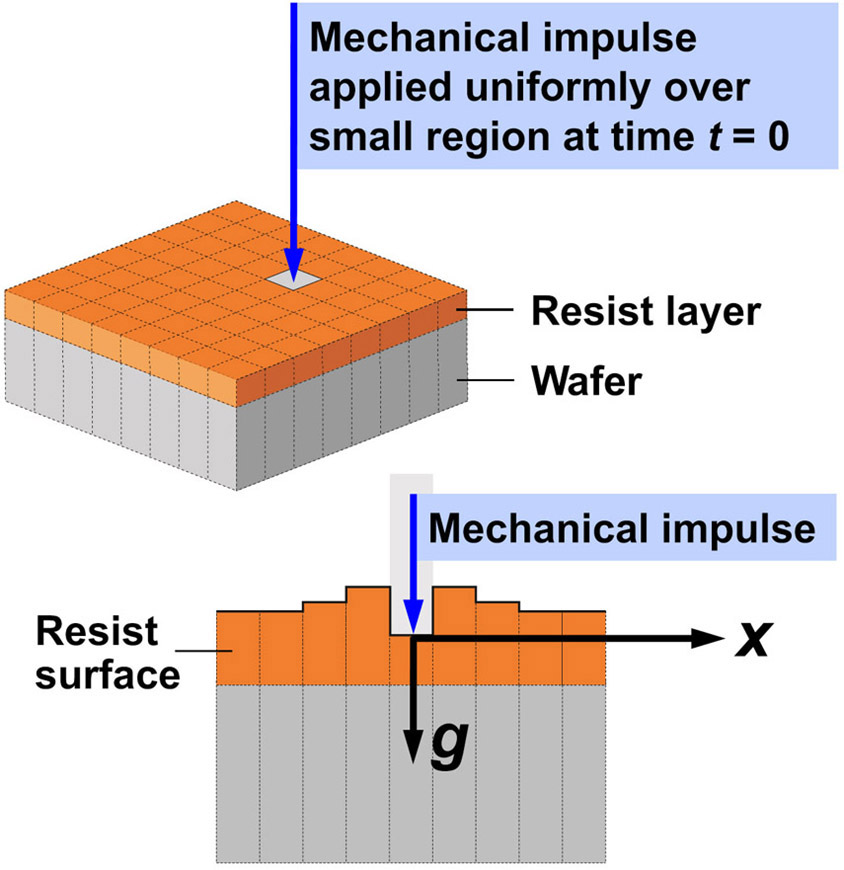 Figure 2. Illustration of impulse-response-based modeling of resist deformation.6The simulation region is represented as a 2D square grid in the x-y plane (where y is directed out of the page). The impulse response captures the deformation, g(x,y), of the resist's surface topography in response to a unit mechanical impulse applied at a single grid location.

Our simulations iteratively find the distribution of contact pressure between the template and the spreading resin droplets for a series of time steps. In these simulations, the speed and direction of resin-spreading are computed at each step by 2D convolution of the impulse response with the pressure solution. We then stitch together full-template defectivity predictions from the results of many sub-simulations containing clusters of droplets. These simulations can be completed in about an hour. We have also developed an alternative, abstracted model to describe the behavior of clusters of droplets (see Figure 3). This model enables full template-scale simulations to be completed at coarser resolution within a few minutes. 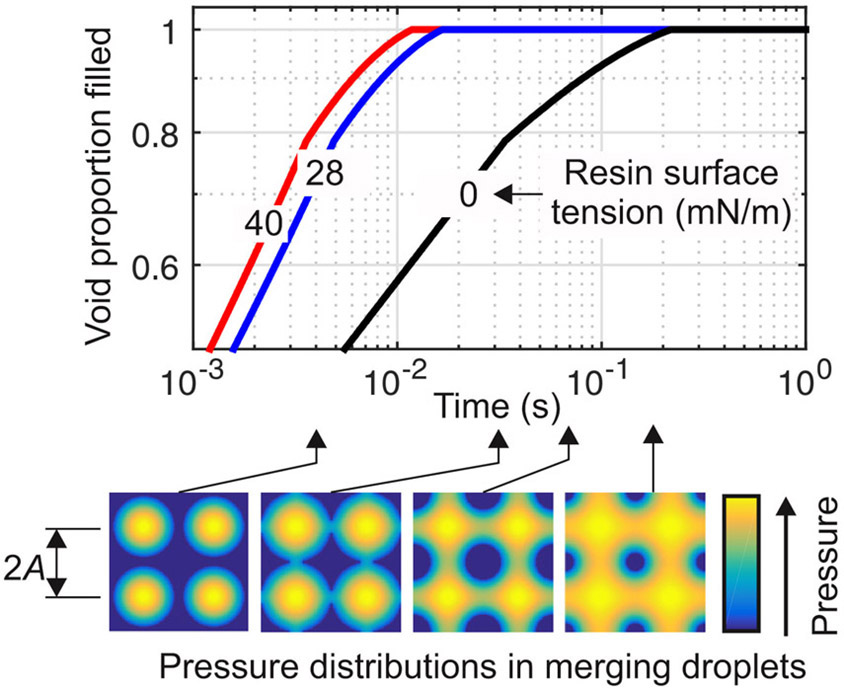 Figure 3. Depiction of the droplet-coalescence model.6 For 1pL of droplets with a viscosity of 10mPa·s, on a pitch of 120μm (2A), loaded at 40kPa, the coalescence time is reduced at least 10-fold by introducing realistic capillary loads (with resin-solid contact angles of 30°) to the model.

In summary, we have developed a new method for simulating droplet behavior during NIL. Our technique paves the way for NIL simulation to be used iteratively in pattern and process design, or as a design sign-off check. In our ongoing work, we are validating our model against manufacturing data. We also plan to incorporate the ability to account for non-flat wafer surfaces, such as those produced by chemical–mechanical planarization of underlying layers. In addition to solid-state memory, there are many other industrial applications of NIL, including photonics, photovoltaics, biological nanofluidics, and wettability-controlling surfaces. These applications all stand to benefit from a rational selection of template layout, materials, and processing parameters, as enabled by NIL simulation.

Hayden Taylor is an assistant professor of mechanical engineering, and is a founder of Simprint Nanotechnologies Limited. He received a BA and MEng in electrical and electronic engineering from Cambridge University, UK, and a PhD in electrical engineering and computer science from the Massachusetts Institute of Technology.