Complex alloys and compounds possess an impressive array of properties and functionalities. These features often emerge from the particular ordering of constituent atoms within the crystal lattice (i.e., the chemical ordering). One key challenge for studying these materials is the ability to characterize chemical disorders that can alter, suppress, or enhance such unique functionalities. An ability to determine the distribution of the constituent atoms in complex alloys is therefore of critical importance for the materials community.

Such measurements have been nearly impossible to perform in alloys that contain atoms with comparable sizes (‘similar’ atoms, i.e., in terms of atomic number and bond length). This difficulty arises primarily because conventional charge-scattering techniques (e.g., x-ray and electron) lack the sensitivity required to differentiate between similar atoms. For this reason, there is confusion in the literature regarding various ‘related’ or ‘indistinguishable’ structures (i.e., where similar atoms that occupy different lattice sites correspond to different crystalline symmetries but the structural differences may or may not be detectable experimentally). The problem is further amplified because there are a large number of alloys with two or more constituent elements that belong to the same row in the periodic table. 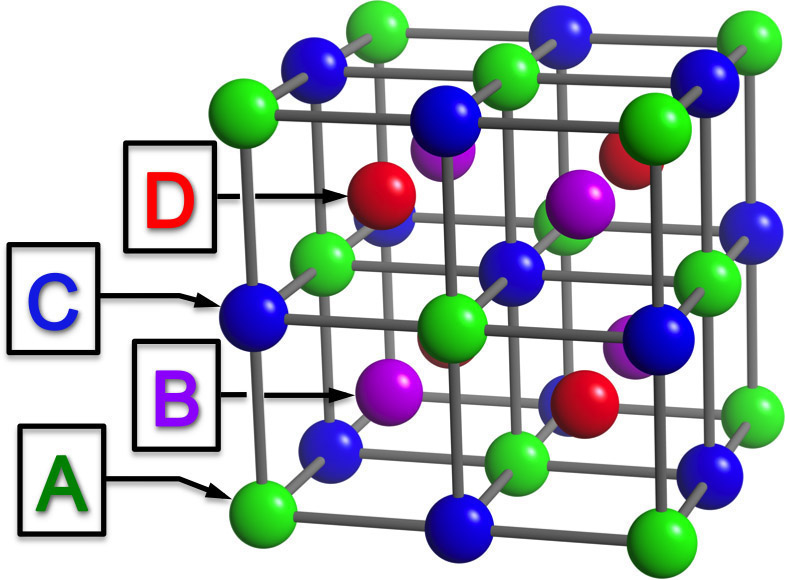 Figure 1. The Heusler compounds and related lattice structures. Four interpenetrating face-centered cubic (FCC) sub-lattices are each occupied by a specific element positioned at [000],

To overcome these issues, we have recently developed an x-ray diffraction (XRD) technique called multiple-edge anomalous diffraction (MEAD).1 Our approach is based on tracking the diffraction intensity versus the x-ray energy through multiple absorption edges of the constituent elements. At energies near the absorption edge, anomalous dispersion and absorption cause variations in the atomic form factor, effectively causing the resonant atoms to scatter x-rays to a greater or lesser extent. By investigating the scattering intensity at these edges, the sensitivity of XRD is enhanced and differentiation between resonant atoms within the lattice is made possible. Earlier synchrotron-based anomalous scattering experiments carried out at a single absorption edge have shown promise for detecting and quantifying a variety of chemical disorders in ultrathin films of ternary alloys.2, 3 We are the first to investigate the full power of anomalous XRD as a tool for the quantitative analysis of element-specific occupation or vacancy in a crystal lattice. 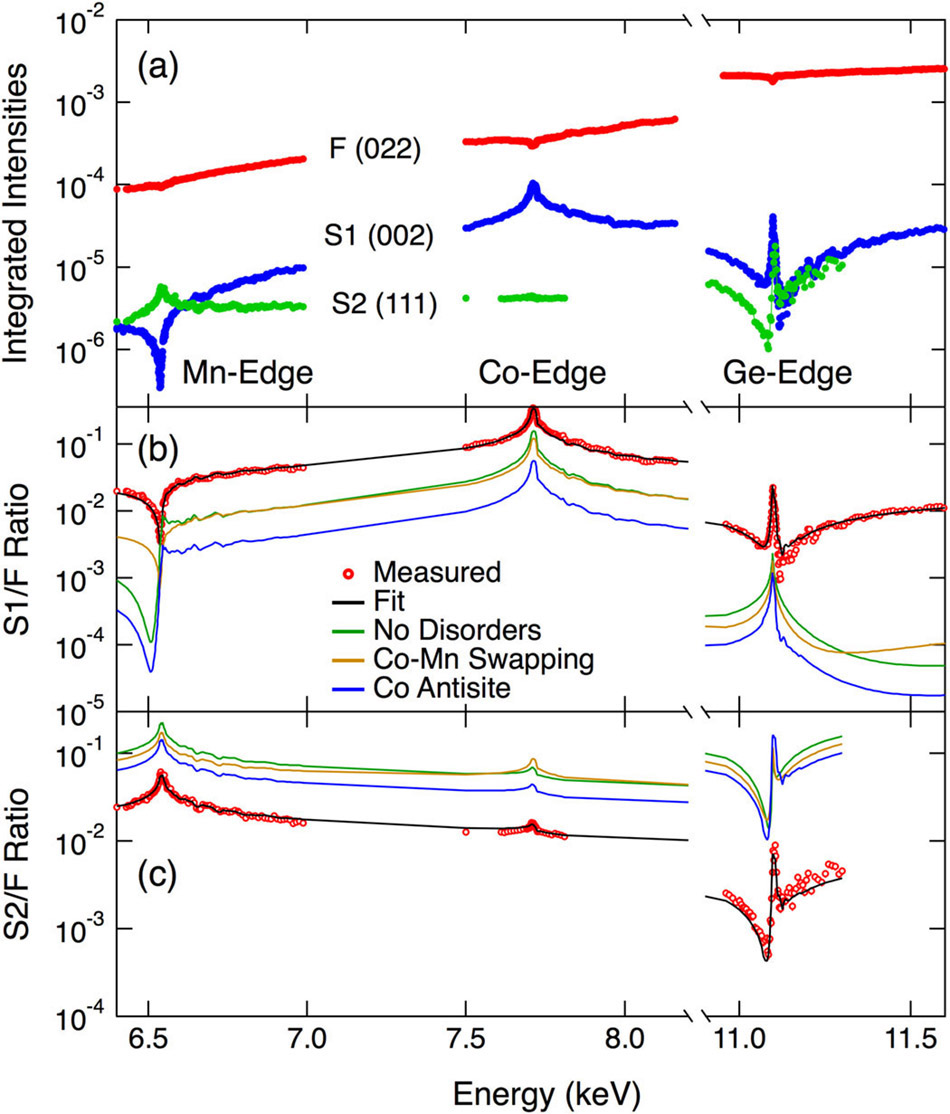 Figure 2. Multiple-edge anomalous diffraction (MEAD) intensities versus energy through three absorption edges for an epitaxial film of (Co2/3Mn1/3)0.7Ge0.3(i.e., 46.7% cobalt, 23.3% manganese, and 30% germanium). Measured intensities (points), fits, and model simulations (lines) for (a) integrated intensities and (b, c) intensity ratios. The respective model simulations correspond to no disorders (green), 20% Co-Mn swapping (gold), and 20% cobalt antisites (blue). For clarity, the model traces at the germanium edge are shifted by one decade down for S1/F and one decade up for S2/F ratios. The fit (black) corresponds to 26.6% Mn-Ge swapping, accompanied by 13.2% germanium antisites, and 7.2% germanium-site vacancies with other disorders at about 1% and below. Antisites correspond to the given atom occupying other sites. It is interesting to note that the large observed Mn-Ge swapping is unexpected, while the energetically more favorable Co-Mn swapping according to first principles calculations is undetectable in this film.

Our method involves measuring the diffraction intensity versus energy through each element's absorption edge and at each unique Bragg reflection. We are then able to model the energy-dependent diffraction intensity via separate occupancy variables for each element and each lattice site with the corresponding atomic form factors (i.e., that include the anomalous corrections). We can thus quantify which atom is occupying which site. We implemented an exhaustive list of energy- and momentum-dependent correction factors and carefully considered, calculated, and tested their accuracies.4 We then used the model to fit the measured intensities with the occupancy variables as the adjustable parameters. We have thus shown MEAD to be capable of determining the quantitative levels of element-specific occupations at specific lattice sites. Additionally, we have provided a detailed ‘how-to’ guide for MEAD experiments and analysis.1 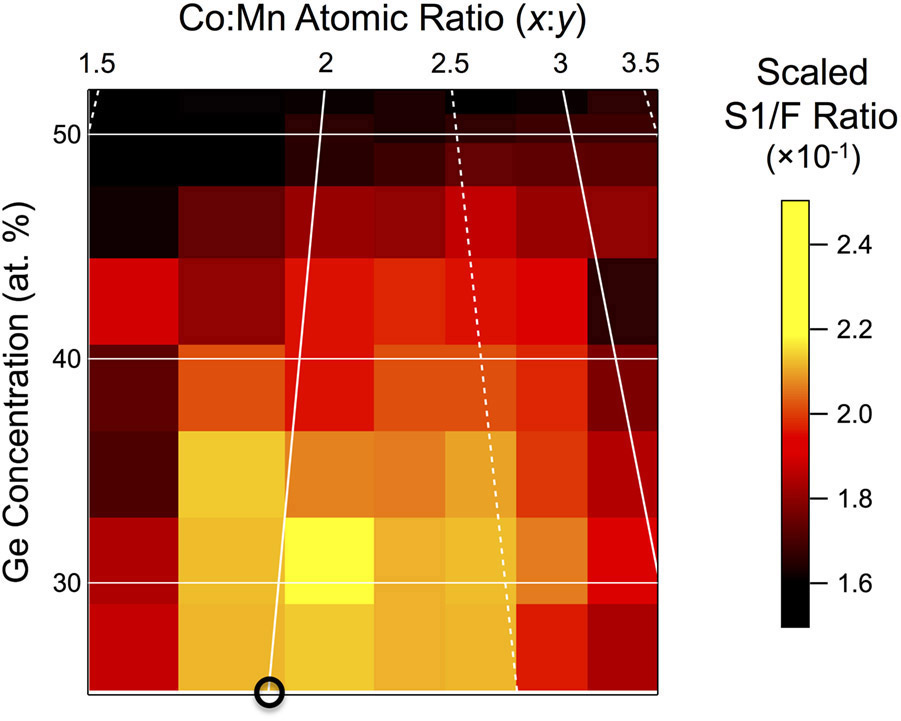 Figure 3. Scaled anomalous diffraction intensity ratio, i.e., the on-resonance S1/F ratio at 7.71eV (the Co-edge) scaled by the corresponding off-resonance value at 7.67eV, versus composition for CoxMnyGe1 - x - y epitaxial films grown on germanium (111). White lines correspond to the measured composition grid, and the circle at the bottom corresponds to the composition of the stoichiometric compound Co2MnGe. The maximum Co-resonance feature at (Co2/3Mn1/3)0.7Ge0.3 is indicative of the best ordering of Co atoms in the Co sub-lattice (A- and C-sites in Figure 1), whereas the diminished intensity away from the hot spot corresponds to missing Co atoms in the Co sites (where there are either vacancies or Co atoms are substituted by other atoms) and/or some of them occupying the other sites (i.e., B- and D-sites).

We used our novel technique to examine epitaxial films of the Co2MnGe (i.e., two parts cobalt, one part manganese, and one part aluminum) Heusler alloy (a predicted fully spin-polarized material, the so-called half-metal) and its off-stoichiometric counterparts.1 Heusler alloys belong to a family of ternary and quaternary compounds that are crystallized in the cubic L21  structure (see Figure 1),5 and have been predicted to possess properties that make them candidates for use in future information technologies.6, 7 In particular, the half-metallic states in these materials, which arise from their chemical ordering, can be exploited for spintronics applications. The L21 structure produces three unique Bragg reflections, one fundamental (F) and two superlattices (S1 and S2), with cubic indices (022), (002), and (111), respectively. Owing to the details in the structure factors (i.e., either addition or subtraction of each element's atomic form factor), the F-reflection is insensitive to chemical disorder. The superlattice reflections, on the other hand, are highly sensitive to disorder.

We measured diffraction intensities versus energy through three absorption edges, and at the three Bragg reflections. We then normalized the superlattice intensities by the intensity spectrum of the fundamental Bragg reflection, thus eliminating the need for energy-dependent scale factors. We found that the integrated intensities and their ratios exhibit distinctive features (see Figure 2 for a set of MEAD results). The MEAD spectra clearly show that our technique makes it possible to distinguish between various chemical disorders, yielding quantitative values for the disorder with precision and resolution at about 1% of site occupancy (i.e., the threshold for detecting and quantifying the statistical fraction of a given atom occupying a specific lattice site). Both qualitative (e.g., the shapes of the resonances) and quantitative differences are critical in identifying and quantifying the different chemical disorders present in the material. In other words, ignoring either one can lead to spurious interpretations. We also examined the efficacy of the single-edge approach. Our results show that although such an approach is capable of detecting the qualitative trend of a certain chemical disorder, it is unable to resolve disorders that are correlated (an example of this is shown in Figure 3). Correlated effects can only be removed by the use of MEAD.

In summary, we have developed a technique based on XRD that tracks the diffraction intensity versus the x-ray energy at multiple absorption edges (i.e., MEAD). By examining the unique energy-dependent diffraction features, MEAD provides a powerful tool for resolving and quantifying elemental occupancies in nanoscale complex alloys, thus making it possible to characterize an important property of materials. In the future, we will employ this technique to explore means by which to control and ultimately manipulate chemical disorders in nanoscale materials through atomic-scale synthesis. We then intend to use our findings on chemical disorders to investigate their influences on the electronic, magnetic, and half-metallic properties of the materials.

Frank Tsui is a professor of physics. His research is focused on the novel synthesis and characterization of nanoscale magnetic materials using combinatorial molecular beam epitaxy techniques. He received his PhD in physics from the University of Illinois at Urbana-Champaign in 1992.

Brian A. Collins is an assistant professor. His research applies x-ray spectroscopy, microscopy, and scattering techniques to investigate nanoscale ordering and dynamic states in organic optoelectronic materials and devices. He received his PhD in physics from the University of North Carolina at Chapel Hill in 2009.

Yong S. Chu is a physicist with expertise in x-ray diffraction, x-ray microscopy, and synchrotron instrumentation. He is currently responsible for operation of the Hard X-ray Nanoprobe (HXN) beamline at NSLS-II. He received his PhD in physics from the University of Illinois at Urbana-Champaign in 1997.