A whole family of promising nanoengineered photocatalysts have been identified to enable the generation of solar fuels, hydrogen, and oxygen via artificial photosynthesis.
04 April 2017
Louis Piper, Gökhan Ersan, Sarbajit Banerjee and David Watson

In artificial photosynthesis, sunlight, water, and engineered catalysts are used to generate solar fuels. The ability to simply store solar energy in the form of fuel (e.g., oxygen and hydrogen) is highly appealing, particularly compared with more complicated configurations that are based on solar cells and lithium ion batteries. Splitting water into its constituent parts using the energy from UV radiation was first realized in the 1970s, during the peak of an oil crisis. In this approach, platinum was used to initiate the hydrogen evolution reaction and titanium dioxide (TiO2) was used to oxidize water.1

Ideally, it would be possible to use visible light for water splitting. The realization of efficient water splitting using this frequency range remains elusive, however. The problems largely stem from the challenge of initiating the oxygen-evolution reaction (i.e., OER, the oxidation of water into oxygen gas and protons).2 For this process, charge (in the form of holes) is required at energies that are difficult to obtain from photogenerated carriers in oxide-based photocatalysts (without relying on the application of a large bias). Metal oxides such as TiO2 are preferred for this purpose because they are inexpensive and are stable in aqueous solutions.2 However, TiO2 has a large band gap (3eV) with a deep oxygen 2p-derived valence band. Thus, only 5% of sunlight can generate electron-hole pairs, and of these, the hole energies lie approximately 2eV below the OER. A major research effort over the last decade has focused on engineering metal-oxide heterojunctions that enable hole transfer at energies closer to the oxygen-evolving (H2O/O2) redox potential.3 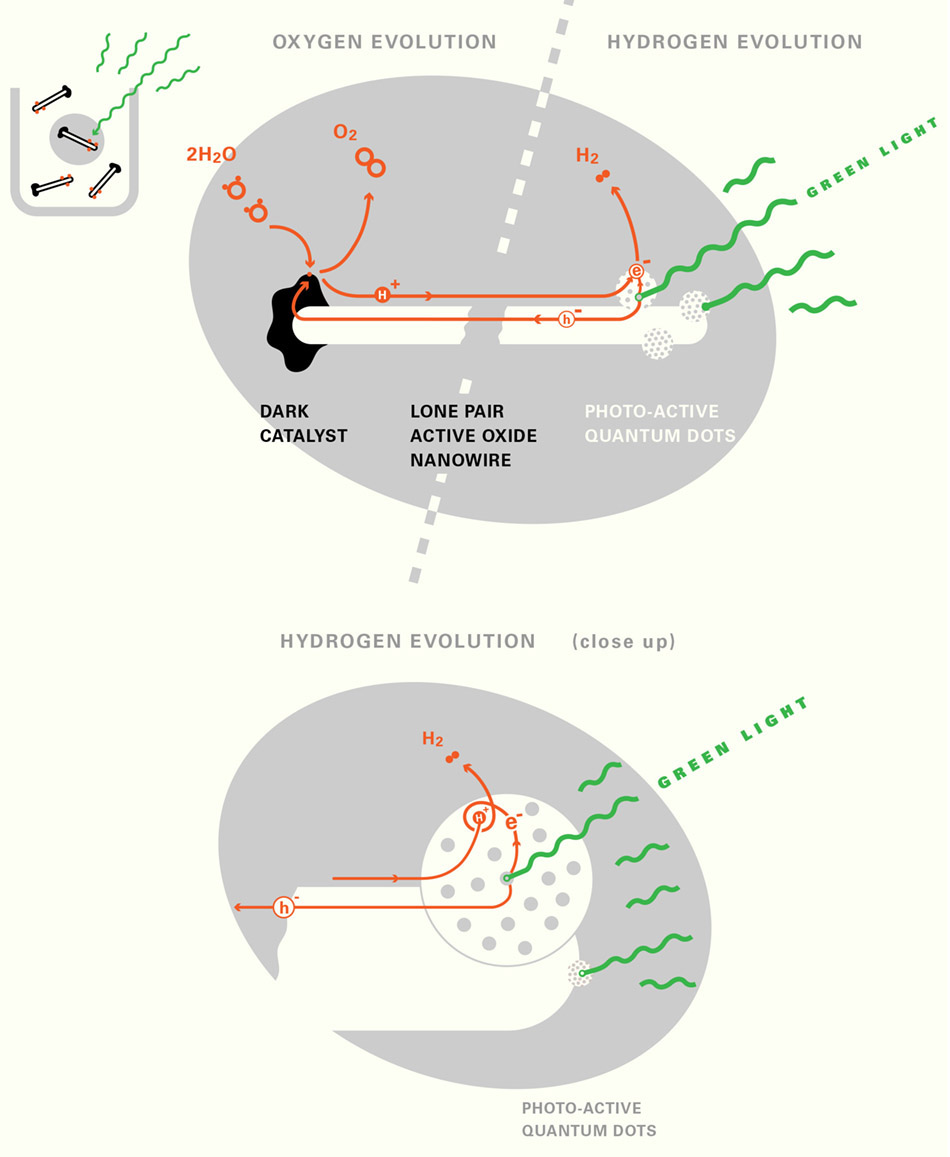 Figure 1. Our design of a lone-pair active nanowire hybrid system for water splitting. The top image shows the two operations performed by the nanowire (NW). First, photogenerated holes from the photoactive quantum dots (QDs) are transferred to the dark catalyst for the oxidation of water. The remaining electrons are then involved in evolving hydrogen. This process is shown in closer detail in the bottom image. The energy alignment between the QDs and NWs enables the photogenerated holes to transfer to the NWs faster than the electrons, thereby facilitating efficient charge separation. The transferred holes have energies close to the oxygen-evolving (H2O/O2) redox. This figure was generated as a result of a ‘graphic design as a research tool’ project between Louis Piper and Gökhan Ersan at Binghamton University.

To create our system, we first attached photosensitive semiconductor quantum dots (QDs), such as cadmium sulfide (CdS) and cadmium selenide (CdSe), at one end of the rod to generate electron-hole pairs. These holes are driven from the quantum dots into the nanowires due to thermodynamic effects. The quantum dots also act as the hydrogen-evolving reaction (HER) site, thereby removing the requirement for expensive platinum. To improve their catalytic reactivity, our QDs could be further interfaced with earth-abundant electrocatalysts, such as molybdenum disulfide (MoS2) or nickel phosphides. Finally, holes are transported to the OER catalysts (i.e., so-called dark catalysts,5 which react without requiring light) at energies closer to the H2O/O2 redox.

Vanadium pentoxide (V2O5) has a band gap of 2.1eV and can accommodate a large variety of ions with its numerous polymorphs. By intercalating Pb2+ lone-pair active ions into V2O5, we were able to raise the valence band closer to the H2O/O2 redox via the same oxygen-mediated lone-pair mechanism.6 Further, attaching CdSe QDs to the PbxV2O5 NWs resulted in the transfer of photogenerated holes from the quantum dots to the nanowires.7, 8 Holes can then be transported between the catalytic sites by the nanowires, as shown in Figure 1. We were able to confirm this favorable band alignment (i.e., the thermodynamic barrier) at the buried QD/NW interface for hole transfer via high-energy x-ray photoelectron spectroscopy (XPS) measurements.7

To illustrate the possibility of engineering the thermodynamic barrier for efficient charge separation using this paradigm, we replaced CdSe QDs with CdS.9 In so doing, we achieved a 0.4eV reduction of the hole-barrier height for hole injection (as confirmed by XPS). Additionally, complementary transient absorption spectroscopy of CdS QD/PbxV2O5 NWs confirmed fast (<1 picosecond) hole transfer from the dot to the NW, representing a speed that is orders of magnitude faster than the competing electron transfer (i.e., which occurs simultaneously and is detrimental to the hole transfer process). By altering the mode of attachment of the QDs to NWs, the electron-transfer timescales could be further modulated.

In summary, we have achieved efficient charge separation and hole transfer by band engineering the energetic alignment between lone-pair active metal-oxide NWs and photoactive QDs. Our method provides a versatile platform wherein the thermodynamics and kinetics of charge transfer can be systematically modulated to improve the efficiency of charge separation across interfaces. The technique makes it possible for holes to attain energies that are close to the desired H2O/O2 redox potential for water splitting. It is attractive because a variety of lone-pair active ions—e.g., Pb2+, tin ions (Sn2+), and bismuth ions (Bi3+)—can be accommodated within V2O5 nanowires. Further benefits include the variety of V2O5 structural frameworks and modes of QD attachment that can be implemented, and the tunable properties of the QDs. Our methodology therefore presents a rich phase space for optimizing efficient charge transfer for artificial water splitting. Currently, our research efforts are focused on the study of vanadium bronzes using various alternatives to Pb2+. We are also exploring different attachment modes to improve the interface between the QDs and NWs.

This research was supported by the National Science Foundation, with a Designing Materials to Revolutionize and Engineer our Future (DMREF) collaborative grant between Binghamton, Buffalo, and Texas A&M Universities (grants 1627583, 1627197, and 1626967).

Louis Piper is an associate professor. He received his PhD in physics from Warwick University, England, in 2006 and joined Binghamton University as faculty in 2010, after post-doctoral appointments with Boston University.

Gökhan Ersan is an assistant professor in the Department of Art and Design. He received his PhD in design history from the University of Illinois at Chicago in 2012 and joined Binghamton as faculty in 2015, after 14 years of teaching at the School of the Art Institute of Chicago.

Sarbajit Banerjee is a professor of chemistry and of materials science and engineering. He received his PhD from Stony Brook University in 2004 and was a post-doctoral research associate at Columbia University from 2004 to 2007.

David Watson is a professor of chemistry at the University at Buffalo. He received his PhD from Princeton University in 2001, and joined the faculty at Buffalo in 2004 following post-doctoral research at Johns Hopkins University.