Breast-conserving surgery is the most common surgical procedure used in the treatment of early-stage breast cancer.1 The aim of this surgery is to remove all malignant tissue such that the surgical margin is free of cancer, while preserving the breast and ensuring a good cosmetic outcome. Currently, accurate microscopic margin assessment is only available postoperatively, via histopathological examination, days after the surgery. Of patients undergoing breast-conserving surgery, 20–30% require a second surgery when pathology reveals a tumor that is close to or at the margins,2 known as an ‘involved margin.’ Intraoperative pathology techniques, such as frozen-section histology and imprint cytology of the edges of a specimen, or of shavings around the excised mass, are used in some hospitals. These methods are limited to assessing only a small portion of the margin, however. Intraoperative imaging techniques, such as ultrasound and radiography, are also used. These modalities are much faster, but lack the spatial resolution of more recently proposed optical techniques. Despite the use of these techniques, re-excision rates remain high.3

A number of intraoperative optical techniques have been proposed for tumor margin assessment, including optical coherence tomography (OCT).4 The optical contrast from OCT alone may not, however, be sufficient to reliably distinguish tumor from uninvolved tissue. The intrinsic mechanical properties of tissue can provide an alternative source of contrast, which can be measured using techniques such as optical coherence elastography (OCE). OCE uses OCT to measure the tissue deformation in response to a mechanical load, and generates images (‘micro-elastograms’) based on changes in the tissue's mechanical properties.5

We have previously demonstrated a variant of OCE that achieves lateral resolutions (∼10μm) close to those of OCT over large (∼20 × 20mm) en face fields of view.7 The technique employs a Fourier-domain OCT system operating in a common-path configuration. Quasi-static loading (using an annular piezoelectric actuator) is applied to the specimen, and the local axial displacement of the tissue is determined from the OCT phase difference between loaded and unloaded scans. Tissue strain is calculated as the rate of change of the displacement with depth using linear regression. This axial strain is then mapped onto a 3D micro-elastogram.

In a feasibility study published in 2015, we applied this technique to the imaging of 58 fresh, unstained breast-tissue specimens.9 We observed that in areas of malignant tissue, which were typically characterized by tumor cells intermixed with connective tissue, the strain micro-elastograms often displayed a heterogeneous pattern. By contrast, uninvolved tissue typically displayed a more homogeneous pattern of negative strain.

More recently, we have upgraded the system with a much larger actuator (∼65mm diameter), thus enabling a lateral field of view of ∼50 × 50mm.6 Using this system, we were able to scan an entire face of most lumpectomy specimens within 30 minutes. Figure 1 shows the results of this wide-field OCT/OCE imaging approach applied to a freshly excised lumpectomy specimen from a 46-year-old patient undergoing breast-conserving surgery. The micro-elastograms show a distinct difference between the region with a clear (negative) margin—see Figure 1(b–d)—and the area found by histology to contain an involved (positive) margin: see Figure 1(e–g). 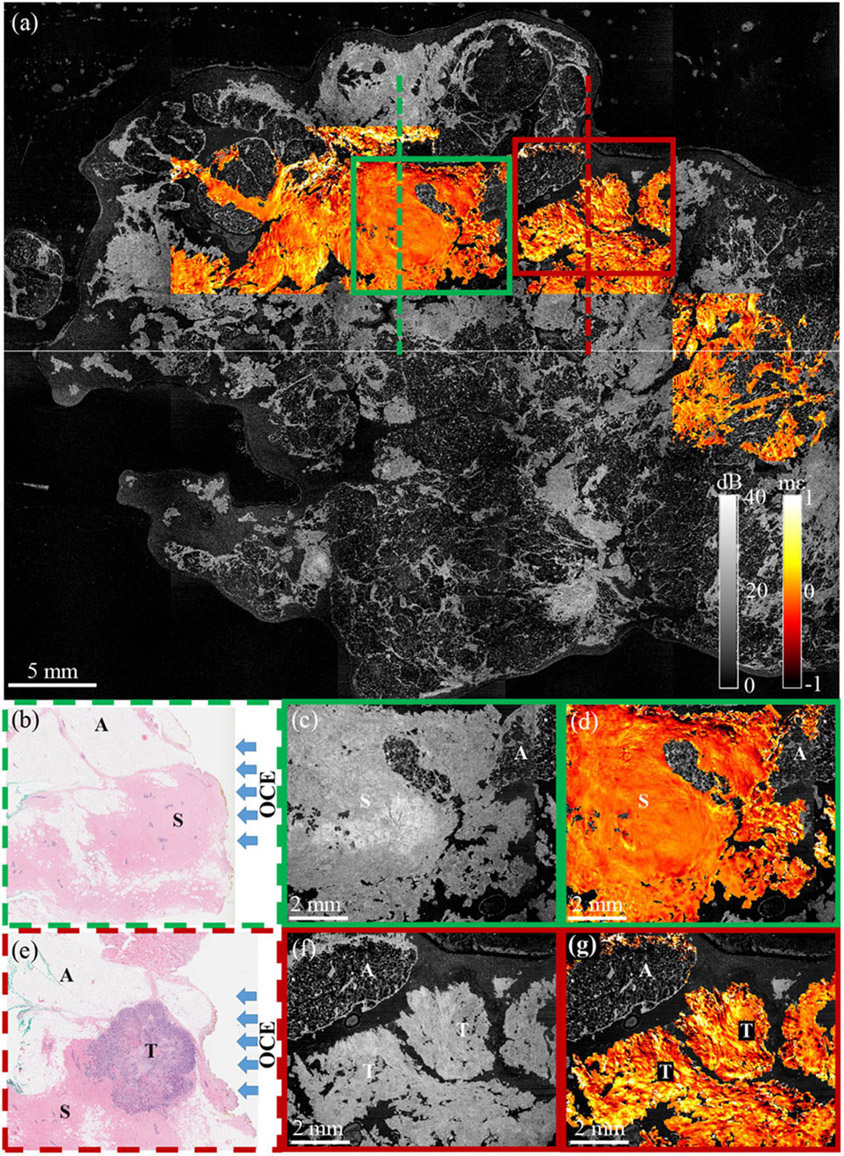 We have observed that malignant breast tissue is often associated with higher mechanical (strain) heterogeneity than benign tissue. Using this information, we developed a method to quantify and map this heterogeneity over local regions, enabling the generation of a simplified image of the breast micro-elastogram.8 Figure 2 shows the results of this heterogeneity mapping applied to a specimen containing a mucinous carcinoma, excised from a 38-year-old patient. The boundary between the uninvolved stroma on the left and the tumor on the right is more clearly visible in the heterogeneity image—see Figure 2(b)—compared with the OCE or OCT alone: see Figure 2(c) and (d). 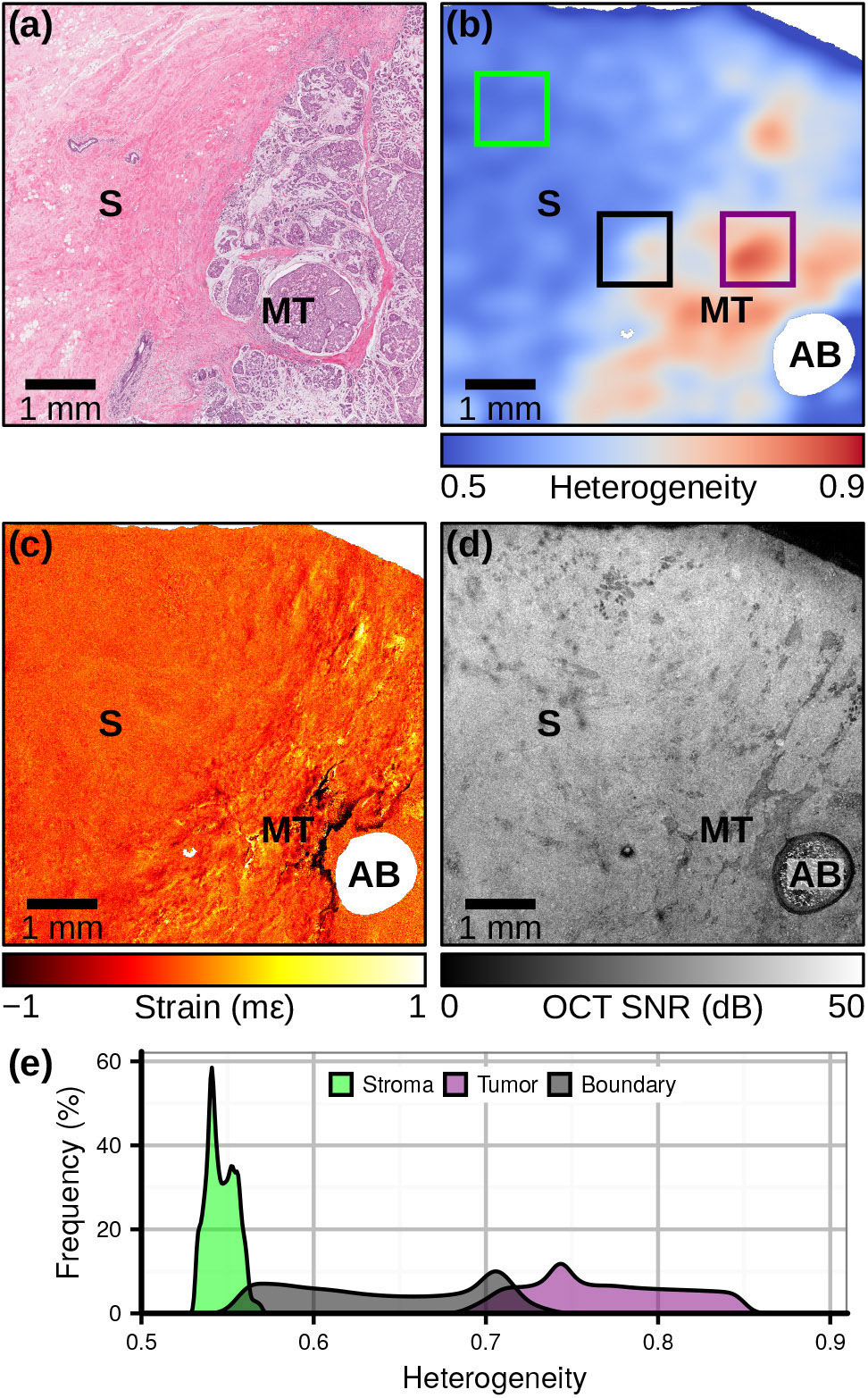 In summary, OCE holds promise for enhancing the contrast of images of breast tissue for tumor-margin assessment. So far, we have demonstrated a method of acquiring scans with fields of view sufficient to image entire lumpectomy specimens. In addition, we have shown a method for simplifying micro-elastograms to facilitate rapid identification of areas of malignancy. In future work, we plan to incorporate further reductions in acquisition and processing time and to determine the diagnostic accuracy of OCE in identifying malignant tissue during breast-conserving surgery in both the excised specimen and tumor bed.