Autonomous ozone, aerosol, and water vapor profiling of the atmosphere

The Autonomous Mobile Ozone Lidar Instrument for Tropospheric Experiments is used to obtain atmospheric profiles from near to the ground to altitudes of more than 10km.
09 May 2017
Kevin B. Strawbridge, Bernard J. Firanski and Michael S. Travis

Tropospheric ozone, aerosols, and water vapor are important atmospheric constituents that affect air quality and climate. For instance, ozone is a short-lived climate pollutant that is photochemically active with nitrogen oxides, and its concentration in the troposphere can be significantly increased by stratospheric–tropospheric exchange events. In addition, aerosols contribute to the radiative budget, are a tracer for pollution transport, and they affect visibility, cloud formation, and air quality. Lastly, water vapor plays a pivotal role in climate change and atmospheric stability because it influences many atmospheric processes (e.g., cloud formation and photochemical atmospheric reactions). It is therefore important to measure the abundance of these atmospheric components in a synergistic way, to support the development of air-quality forecasts and diagnostic models. Such measurements can also be used for validating satellite observations that provide a regional to global perspective.

Lidar (light detection and ranging) technology has rapidly advanced over the past several decades. From a number of different platforms, this technique can now be used to measure a variety of atmospheric constituents with ever increasing accuracy and at ever finer scales. Although the number of lidar instruments continues to increase worldwide, these platforms generally require an operator (particularly high-powered lidar systems).1, 2

To overcome the need for a lidar operator, our team at Environment and Climate Change Canada (ECCC) have previously designed several autonomous aerosol lidar systems3 to support a number of research objectives. For example, we have recently developed an autonomous mobile lidar system (see Figure 1) that is known as the Autonomous Mobile Ozone Lidar Instrument for Tropospheric Experiments (AMOLITE).4 With this system, we build upon the successes of our earlier autonomous lidars, but we now use a synergistic approach to simultaneously measure the vertical profiles of tropospheric ozone, aerosols, and water vapor. Within the AMOLITE design (see Figure 2) we combine a dual laser for redundancy purposes and a dual lidar design, i.e., the tropospheric ozone Differential Absorption lidar (DIAL) and an aerosol lidar with three backscatter channels, two Raman channels, and one cross-polarization channel (‘3+2+1’ configuration). In addition, we have added a water vapor channel—arising from the Raman-shifted 355nm output (407nm)—to provide nighttime water vapor profiles. The final product of our system is lidar profiles (near-ground to 10–15km altitude) at minute-long intervals. Our system is operated remotely 24 hours a day, seven days a week (except during precipitation events). Furthermore, the data are updated hourly to a website, thus enabling near-real-time analysis. 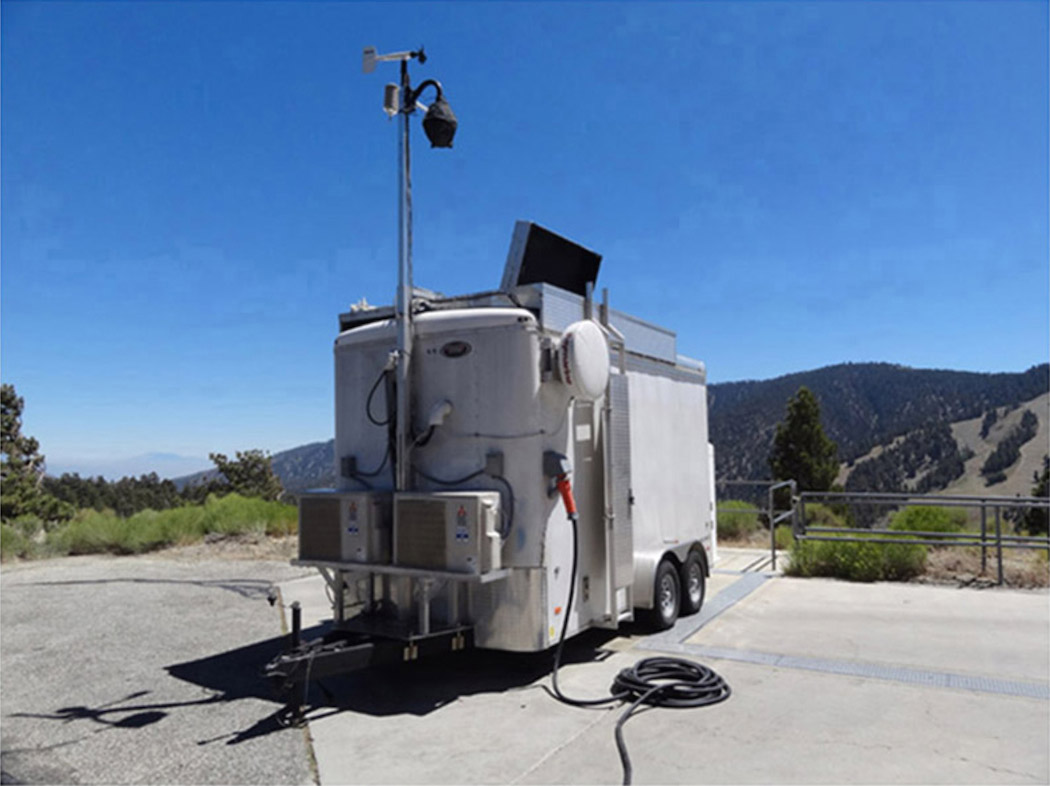 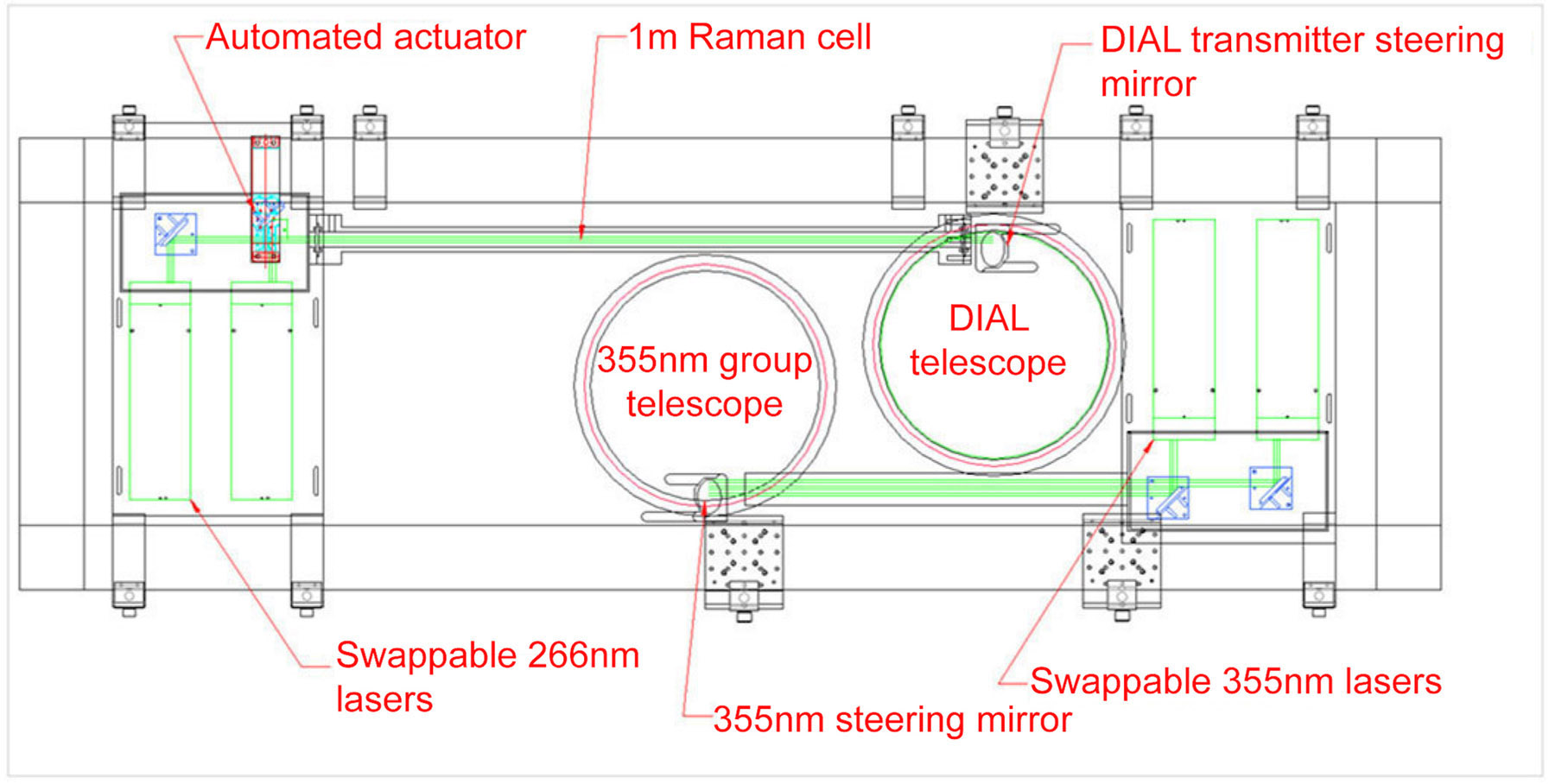 Figure 2. Schematic of the transmitter layout of the AMOLITE optical bench. The design includes the Differential Absorption lidar (DIAL) and a dual laser design for each lidar transmitter assembly. The 266nm laser light is Raman-shifted with the use of a 1m-long carbon dioxide Raman cell.5 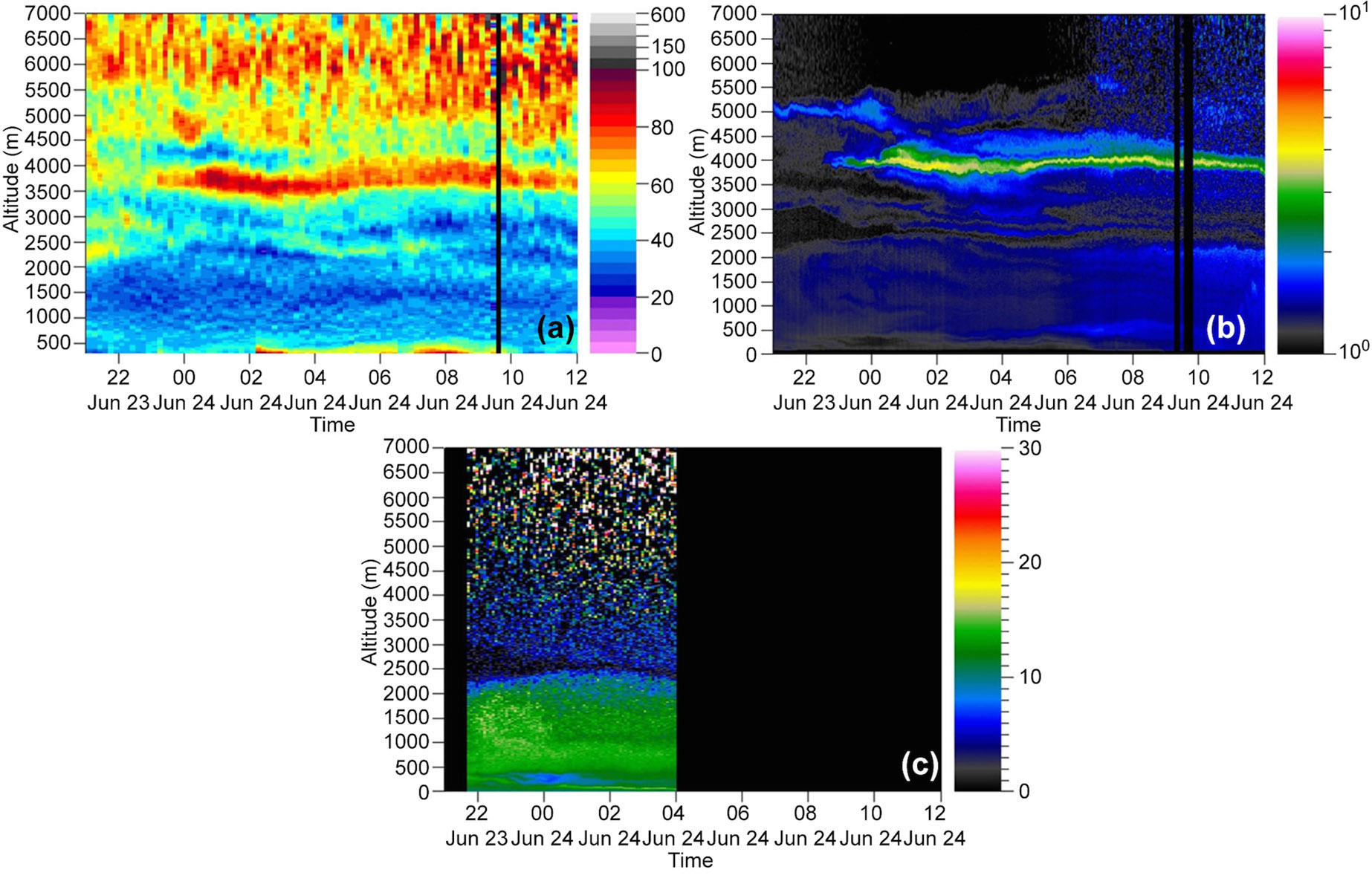 Figure 3. Plots of (a) the ozone mixing ratio in parts per billion volume (ppbv), (b) the 532nm backscatter ratio, and (c) the water vapor mixing ratio in g/kg obtained simultaneously from AMOLITE during a 15-hour period on 23–24 June 2016 (local time is shown). These measurements were obtained as part of the instrument's testing phase. Water vapor measurements were only obtained at night.

Figure 4. Plot of the ozone (O3) mixing ratio from near to the ground to an altitude of 13.5km above sea level (asl). These AMOLITE observations were obtained at the Jet Propulsion Laboratory's Table Mountain Facility in Wrightwood, CA (2270m asl) between 9 August and 7 September 2016. White regions in the plot are where no data was obtained because of cloud cover, brief system downtime, or very low signal-to-noise data (daytime). The system performance is reduced during the day because of higher signal background levels.

Figure 5. Results from the Southern California Ozone Observation Project (SCOOP). Left: Ozone profiles obtained with AMOLITE and from an ozone sonde on 15 August 2016 at 15:30 coordinated universal time. Center: The percentage difference between the AMOLITE and sonde profiles (vertical lines represent 10% uncertainty). Right: The horizontal geophysical separation between the sonde and AMOLITE. At higher altitudes there is less agreement between the sonde and AMOLITE ozone measurements because of the increased separation.

Both of the lidars in AMOLITE are mounted in a climate-controlled mobile trailer that has a sophisticated ‘artificial intelligence’ system. In this way, we are able to remotely operate the trailer in a variety of environmental and operational conditions. We also rely on a modified aircraft-detecting radar system to achieve autonomous operation. This radar system automatically detects aircraft within the nominal hazard zone (NHZ) of the laser beam and stops laser emission until the aircraft leaves the NHZ. Full details of our autonomous system have been published previously.3

The true novelty of our autonomous system is that it provides the opportunity to explore the synergy of simultaneously obtained lidar-derived profiles of ozone, aerosols, and water vapor. An example of our three-product data (obtained over a 15-hour period during 23–24 June 2016) is shown in Figure 3. These observations exhibit a substantial amount of correlation and anti-correlation between the three plots. The results show that the concentrated aerosol layer at an altitude of about 4km—see Figure 3(b)—has ozone values of 80–90 parts per billion volume (ppbv)—see Figure 3(a)—whereas the boundary layer ozone has values of about 30ppbv (except for the local ozone plume below 500m during an eight-hour period). In addition, the water vapor profile in Figure 3(c) shows a well-mixed residual layer with values of about 15g/kg, except for a one-hour period of drier air around midnight. The water vapor plot does not indicate that the concentrated aerosol layer is moist.

We also show a 30-day consecutive curtain plot of tropospheric ozone in Figure 4. This data set immediately illustrates the advantage of an autonomous system, i.e., it provides a quick look at many different regimes and processes, along with the atmospheric variability during the observation period. In addition, the water vapor plots we obtain (not shown) allow us to identify stratospheric intrusions because the dry air from the stratosphere correlates well with the high ozone concentrations we observe (another advantage of simultaneously measuring multiple lidar products).

We have evaluated the performance of our AMOLITE ozone lidar through an intercomparison study—with four other tropospheric ozone lidar systems, all of which are part of the Tropospheric Ozone Lidar Network6 (TOLNet). We conducted this study—known as the Southern California Ozone Observation Project (SCOOP)—at the Jet Propulsion Laboratory's Table Mountain Facility in Wrightwood, CA. It provided us with the opportunity to compare lidar ozone profiles obtained with AMOLITE and with lidar instruments on 18 ozone sondes that were launched during the study. Our results (see Figure 5) show that there is a good level of agreement between our AMOLITE measurements and those from the ozone sondes.

In summary, we have developed AMOLITE as an autonomous mobile lidar system to reduce the need for an operator when making atmospheric lidar measurements. We have successfully tested our system and its ability to obtain vertical profiles of ozone, aerosols, and water vapor (from near to the ground to an altitude of about 15km). We have also demonstrated that our system provides measurements with a high level of agreement to those obtained from ozone sondes. In the next steps of our work we plan to add a small telescope to our ozone DIAL system. This will reduce the minimum altitude from which we can retrieve ozone concentrations (from 400m to about 150m). We will also deploy AMOLITE in northern Alberta (Canada), where it will be part of a ‘supersite’ of instrumentation (i.e., a complex suite of in situ chemistry instruments).

Kevin Strawbridge has a PhD in physics and is a senior research scientist in the Processes Research Section of the Science and Technology Branch, where he leads the Lidar group. He is known nationally and internationally for his development of a variety of lidar systems, including two aircraft instruments, a mobile scanning lidar laboratory, as well as various ground-based zenith-pointing lidar systems. He has served on several international committees and continues to provide leadership in his field of research. His main research interests are directed at understanding the optical and chemical properties, as well as the transport mechanisms of aerosols and ozone, in addition to their influence on climate, visibility, and air quality.