New assemblies have been designed and built, based on 20 years of experience, for use in the Advanced Topographic Laser Altimeter System on NASA's upcoming Ice, Cloud, and Land Elevation Satellite-2.
22 May 2017
Melanie Ott

Within Earth's warming climate system, the dynamics of the cryosphere (i.e., the frozen part of the Earth's surface) are vitally important. Indeed, the climate depends heavily on what happens at the planet's poles. For instance, melting sea ice can affect the large-scale ocean circulation patterns that buffer climate extremes. In addition, melting glaciers and ice sheets cause the sea level to rise. To fully understand Earth's rapidly changing climate, it is thus important to understand how and where ice is flowing, melting, or growing, and to investigate the global impacts of these changes.

NASA's Ice, Cloud, and Land Elevation Satellite-2 (ICESat-2) mission1 (a follow-up from the ICESat mission, which flew between 2003 and 2009) has therefore been designed to study different forms of frozen water in a variety of locations (i.e., on land, fresh water, and seawater). The satellite (currently due for launch in 2018) will carry a single instrument, the Advanced Topographic Laser Altimeter System (ATLAS): see Figure 1. Whereas the Geoscience Laser Altimeter on ICESat had a single laser beam (with a 70m spot on the ground) and a distance between spots of 170m, the ATLAS spot size will be 10m and will have a spacing of 70cm. In addition, six beams will be used to measure terrain height changes as small as 4mm. The ATLAS photon-counting laser altimeter will thus enable frequent and precise measurements of elevation for monitoring changes in the cryosphere. 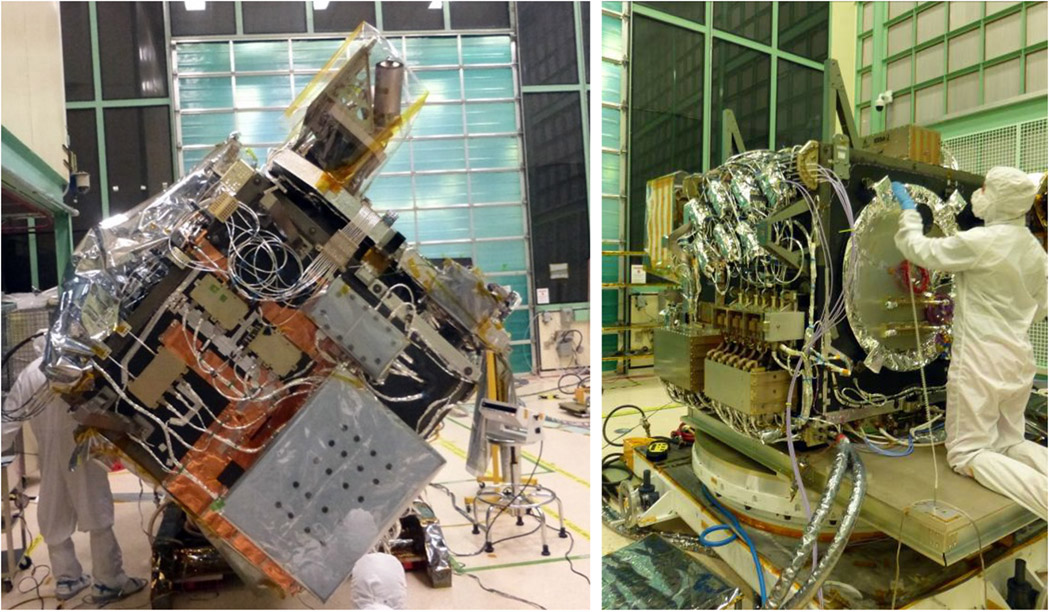 In our work in the Photonics Group2 of the NASA Goddard Space Flight Center (GSFC), we have developed custom optical fiber arrays that are part of the ATLAS optoelectronic subsystems.3 The ATLAS pulsed transmission system consists of two 532nm lasers, along with transmitter optics for beam steering, a diffractive optical element that splits the signal into six separate beams, receivers for start-pulse detection, and a wavelength-tracking system. In addition, our optical fiber system is used to link the larger electro-optical subsystems (i.e., for transmission, calibration, and signal receiving) and to keep them sufficiently aligned for transmission. In other words, the optical fiber system is used to calibrate the alignment of the transmitted pulses to the receiver optics for precise signal capture.

This work is part of our ongoing (for the past 20 years) experience in fabricating and testing fiber optic systems, for remote sensing and science instruments, at GSFC. We have also been developing thermal vacuum optical feedthroughs and cryogenic optical fiber assemblies—for laser communications systems and ground-based test systems (e.g., for testing the James Webb Space Telescope)—for the past 10 years.4 We have thus implemented our findings in the development of high-performance array/bundle assemblies for a number of NASA space missions. For example, we provided array-bundled assemblies (routed across moving gimbals) for the NASA Lunar Reconnaissance Orbiter mission (for both the Lunar Orbiter Laser Altimeter and Laser Ranging Experiment instruments).5 Our other previous mission successes have included a simplex assembly (used to route the receiver telescope light to the detectors) for the Mercury Laser Altimeter on NASA's MESSENGER mission, as well as an assembly (where the incoming light to the camera was routed through moving gimbals to the rover body) for the ChemCam instrument on the Mars Curiosity rover. The flawless performance of these fiber systems (and the mission successes) mean that our optical fiber array in a single high-performance connector has become the standard technology in the baseline design of many other science instruments.

The robust design of our fiber optic system for ATLAS includes a variety of multifiber arrays and simplex assemblies.3 We use different-sized fiber core sizes and types depending on the needs of the specific optoelectronic systems that are being interconnected (e.g., fiber optic arrays that combine multiple fibers into single Diamond AVIM-type connectors). We have used simplex optical fibers to route the signals from the telescope to the wavelength filters and then on to a high-performance set of photon-counting detectors. In addition, multiple dual-array-to-fan-out assemblies are used to monitor the laser transmitter wavelength and the transmitter optical systems. With this variety of arrays and assemblies we can thus maintain consistent critical alignments of the instrument's systems for the entire life of the mission.

The use of photon-counting detectors within the ATLAS instrument means that we had to optimize all our simplex assemblies to transmit the maximum possible power (with high optical stability). These stringent requirements thus led to the need for additional fabrication validation procedures (i.e., beyond the typical procedures for most science missions).

In summary, we have designed and built custom optical fiber arrays for use in the ATLAS instrument that will fly on NASA's ICESat-2 mission. Our array assemblies will be used within the sophisticated on-board calibration system that will keep the transmitted laser beam centered on the receiver telescope optics. Based on our previous mission successes (and our verified screening capabilities),6 we expect our assemblies as well as the instrument and spacecraft to perform well. The instrument is currently going through final integration to the spacecraft at Orbital ATK, before its launch in 2018.

Melanie Ott is leader of the Photonics Group within the Advanced Engineering and Concepts Directorate, Electrical Engineering Division (Parts, Packaging, and Assembly Technologies Branch). She has been working on optical fiber systems for flight instrumentation for the past 22 years.