Liquid crystal composites as a route to 3D nanoparticle assembly

Nanoparticles in a liquid-crystal nanocomposite can be sorted via elastic forces to form 3D solid structures such as capsules and networks.
16 June 2017
Linda S. Hirst, Sheida T. Riahinasab and Charles N. Melton

Obtaining control over the assembly of different nanoparticle types into 3D organized structures on a micron scale represents a significant goal in nanotechnology. Nanoparticles can be made from a variety of different materials. For example, they can be metallic (e.g., gold), semiconducting (e.g., cadmium selenide, CdSe), or magnetic (e.g., iron oxide). When nanoparticles of different types are brought close together, new physical phenomena emerge as the particles interact.

Many recent efforts have been made to produce new materials built from nanoparticles. Over a few microns, it is possible to create well-ordered arrays of different nanoparticles.1–4 Producing these defined assemblies over large length scales (e.g., as surface coatings in electronic devices or thin films in displays) presents a challenge, however. In addition, there has been no clear way to fabricate non-planar shapes, such as thin spherical shells or cylinders, using these approaches.

We have recently developed a new technique that enables the formation of spherical capsules and other geometries from nanoparticles using a particle-sorting process. In this process, we use liquid crystal (LC)—an anisotropic fluid—as a host phase to assemble nanoparticles into 3D micron-scale structures, based on the movement of particles at the isotropic-to-nematic LC phase transition. The structures are composed of densely packed nanoparticles and form spontaneously at the phase transition in a scalable process that can be adapted for industrial applications.

Our overall approach is to use LC phase-transition dynamics as a mechanism for particle sorting. LCs are fluids with local orientational ordering (i.e., neighboring molecules tend to align). Above the nematic-to-isotropic melting point, the fluid behaves as a conventional liquid (also known as the isotropic phase). If the material is cooled to the nematic transition temperature, however, domains of nematic ordering begin to nucleate and grow. In an anisotropic medium such as a nematic LC, dispersed nanoparticles respond to their local environment and tend to move to regions of low orientational order. In general, the inclusion of a small colloidal particle in the nematic phase will cost the system free energy because the LC director (i.e., the average local molecular orientation) deforms to accommodate the particle. The energy cost of this deformation can be described using Frank elasticity.5 If many particles are included, and are of a small enough size to experience significant Brownian motion, they will tend to cluster or locate in areas of low molecular order (e.g., at topological defects), thus minimizing the elastic energy cost per particle. We explored this mechanism and the tendency of nanoparticles to cluster in the nematic phase in a recent publication.6

An important aspect of our more recent work is the introduction of mesogenic ligands to the surface of the nanoparticles.7, 8 The ligands, composed of a rigid rod-like segment (see Figure 1), act to tune particle dispersibility in the LC anisotropic solvent. These ligands can also play another role, i.e., as a mechanism for particle-particle short-range attraction. 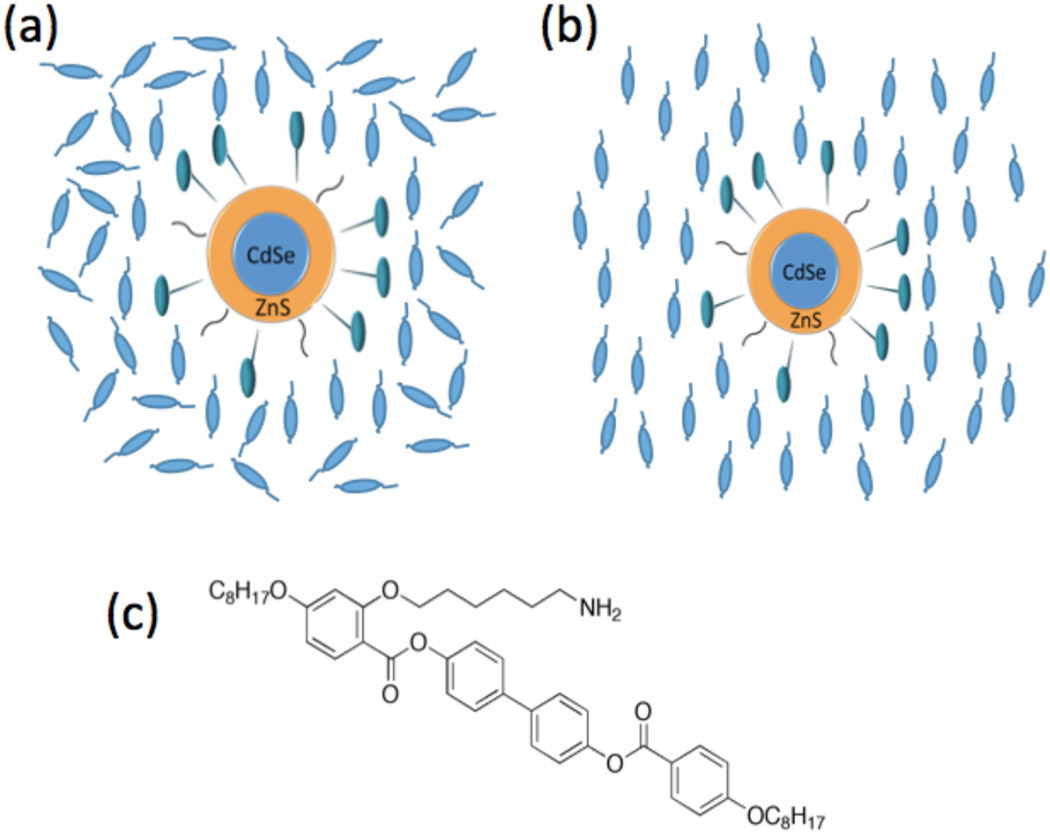 Figure 1. Schematic showing the effects of mesogenic ligands on a single quantum dot in the (a) isotropic and (b) nematic liquid crystal (LC) phase. (c) Chemical structure of the mesogenic ligand we attached to the nanoparticles. CdSe: Cadmium selenide. ZnS: Zinc sulfide.

We observed nanoparticle sorting by preparing dispersions of nanoparticles in the common nematic LC, 5CB (4-cyano-4 ′ -pentylbiphenyl). Specifically, we used particles onto which the mesogenic ligands can be attached. This ligand design incorporates a flexible side-arm attachment to the particle, allowing enhanced ligand alignment with the surrounding nematic phase. We recently reported the use of this ligand to disperse QDs in the nematic phase.7 We found that its use increases particle miscibility with the host phase by reducing strain on the LC surrounding the particle.

Once the nanoparticles have been dispersed in the isotropic phase, a fast-cooling stage initiates particle sorting. The process is summarized in Figure 2, where we illustrate the formation of micron-scale spherical shells (shown in Figure 3). Initially, particles are uniformly distributed. When the material is cooled to the isotropic-to-nematic phase transition temperature, however, nematic domains begin to nucleate and grow. Nanoparticles are expelled from these expanding ordered regions and are sorted into the shrinking isotropic domains. The nematic domains subsequently merge, and the isotropic domains (which contain most of the particles) shrink. Eventually, particles at the shrinking isotropic-to-nematic phase front are dense enough to interact, form a solid, packed surface, and arrest droplet shrinkage. This sets the size of the spherical shell.

Figure 2. Formation mechanism for nanoparticle capsules. The nanoparticles (yellow) are shown first dispersed in the isotropic phase (light blue), and then sorting as the nematic phase (dark blue) nucleates and grows. (The illustrations were obtained from Rodarte and coworkers9 and used with kind permission from the Royal Society of Chemistry.)

Figure 3. Left: Self-assembled nanoparticle capsules suspended in LC and imaged using fluorescence microscopy. Center: Close-up of a large capsule. The fluorescence images isolate the location of the nanoparticles only. Right: A network-like distribution of quantum dots.

Once formed, these spherical shells are very stable to thermal and mechanical effects. They are also quite rigid, and can be heated to over 100°C, indicating that they are stabilized by ligand-ligand interactions. We have also tested a cross-linkable version of the ligand and have found that this approach can be used to further increase thermal stability.9 The process can be carefully tuned to produce different morphologies in addition to spherical shells. By arresting the sorting process earlier on, 3D networks form (see Figure 3).

In general, control over the final morphology can be achieved by varying nanoparticle concentration and the details of the cooling process. Interparticle packing is also tunable by varying ligand design (e.g., flexible attachment arm length).9 These parameters are independent of particle type, and the process can therefore be easily adapted to any appropriately sized nanoparticle or combination of nanoparticles.

In summary, we have developed a new methodology for microscale nanoparticle assembly using LCs. Organizing nanoparticles into large-scale structures is typically a challenge, and this new process could enable the generation of fluid-based systems with defined nanoparticle organizations (e.g., designer capsules for controlled release or multifunctional photonic coatings and films). In future work we will explore the generation of more complex 2D and 3D nanoparticle-based structures. We are also interested in combining different nanoparticles in these composite structures to explore a diverse range of photonic applications.