Power to the pixel

LED chips play many important parts in information display technology, including supplying illumination for LCDs. They are the bright, compact subpixels of digital signboards and video walls that increasingly dominate streetscapes and public spaces, and have recently become the basis of very bright, high pixel-density microdisplays1–4 for head-mounted and projection applications. Here, we describe how mass-transfer micro-assembly5, 6 is using tiny LED chips to reinvent flat panel display technology.

These new flat panel displays are called inorganic LED (ILED) or micro-LED displays. They use light emitters that fit inside each sub-pixel of the panel and have optical simplicity: unobstructed light from millions of independently controlled point sources. What results is a purely emissive display with beautiful images, colors, contrast, and forms. Other emissive technologies such as organic LEDs (OLEDs) start to exhibit some of these characteristics and provide some of today's most vibrant displays, but as good as OLEDs are and even as they continue to improve, ILEDs are better, especially at high brightness. Beyond just increases in power efficiency, luminance, and useable lifetime, the revolution that brings ILEDs to the panel will change the very notion of what a display can be. What OLED displays can do now with very specific thin film semiconductors is merely a glimpse of what ILED technology will deliver with a diversity of high-performance materials.

A huge opportunity exists for next-generation flat panel displays that demand pixel-level integration of high-performance materials such as single crystal silicon, indium gallium nitride, and indium aluminum gallium phosphide onto panels. When the constraints on materials selection are removed, display makers can make better displays, and it is mass-transfer micro-assembly technology5, 7,8 that makes this unconstrained materials selection possible. The power of micro-assembly is to make useful standalone micro-scale components by manipulating them onto a wide range of substrates with precision and very high throughput by the simultaneous transfer of many devices.

Elastomer stamp transfer printing5,7 is a simple and scalable form of mass-transfer micro-assembly that is the subject of our work. This process can supply arrays of micro-scale red LEDs, for example, from their original compact gallium arsenide wafer to a large-area plastic display panel. Furthermore, the same technology can supply arrays of blue and green LEDs and even miniaturized control circuits from their original wafers to the same panel for a full-color, active-matrix display (see Figure 1). Notably, high-performance micro-components can provide the display functions using only a small fraction of the pixel area leaving room to do more, including exciting possibilities for touch, sensing, color, computation, redundancy, transparency, and simply cost reduction. These micro-assembled devices become more than just beautiful displays: they are highly functional systems-on-panels made possible by diverse integration of many dissimilar components. 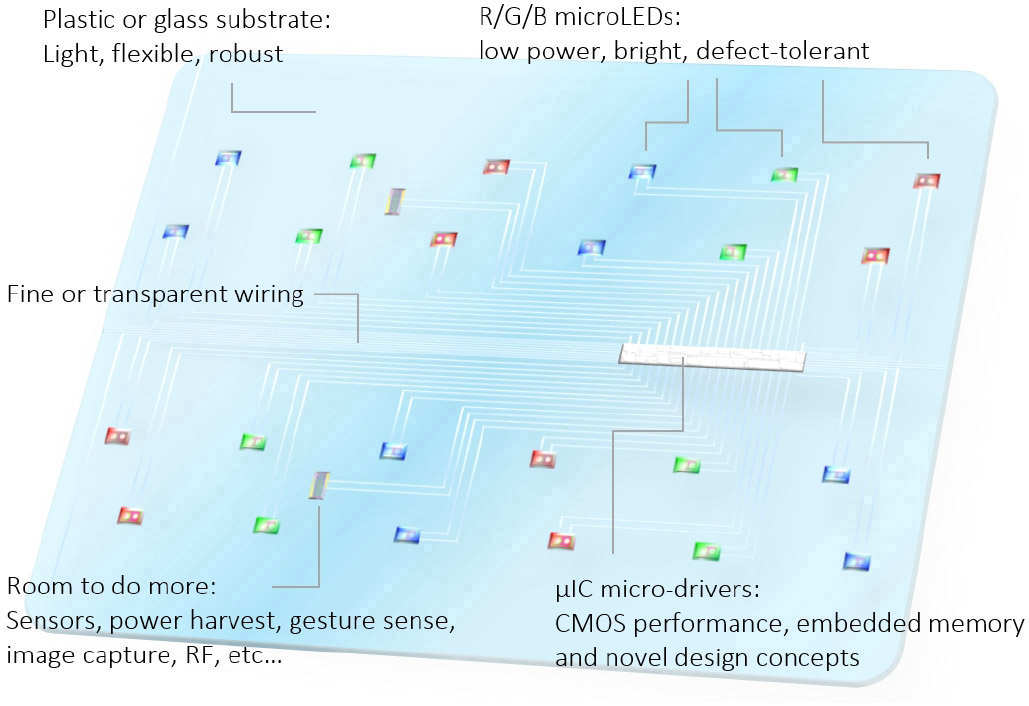 So when will ILED displays hit the shelves, what will they look like, and what will they cost? Displays based on micro-scale LEDs are under development by many groups worldwide, including large technology companies, consortia, research institutions, and start-ups. Successful development of such highly integrated systems requires coordinated efforts in multiple core competencies and the wide applicability of micro-assembly technology platforms poses difficult questions for those wishing to commercialize them, such as what to make first: big displays, small displays, or something else altogether? Nevertheless, some efforts are well advanced along the path to commercialization. For example, last year Sony announced Canvas,9 an advanced large-area display based on micro-LEDs that is modular like a video wall but with the black-screen appearance of a TV owing to tiny, point-like micro-LED emitters. Canvas LEDs have areas of ∼0.003mm2, but from even smaller ILEDs will come products with sizes and resolutions similar to the displays we use every day, including cell phone screens, TVs, monitors, and automotive displays.

These flat panel ILED displays will have compelling cost structures: like video walls, their majority costs are closely related to the pixel count but the cost per pixel can be much lower (similar to OLEDs or in some forms even LCDs). Mass-transfer techniques combined with defect tolerance and repair strategies10 make manufacturing these displays inexpensive, with the major cost reduction coming from miniaturization of the wafer-fabricated micro-components. For example, a semiconductor wafer might supply a few hundred thousand conventional LEDs, but with miniaturization a wafer of similar cost might supply a few hundred million micro-LEDs. Hence, the stronger the ability to miniaturize the pixel-level micro components, the lower the display cost can be. For this reason, a full high-definition ILED TV can achieve a competitive cost structure relatively easily, whereas a quad high-definition ILED smartphone screen demands more thorough miniaturization.

TVs, smartphones, and nearly all flat panel applications can benefit greatly from micro-assembly, but it is not yet clear when ILED displays will hit the shelves or what forms they will take. It is clear, however, that worldwide development efforts in micro-LED displays are growing and that with effective mass-transfer technology, prototype displays are relatively straightforward to make. For example, our recent work has resulted in very simple laboratory-scale ILED prototypes consisting entirely of tiny (0.0001mm2) LEDs, metal lines, and a glass substrate (see Figure 2).11 Extending the effort to large-area panels, state-of-the-art LED materials, and advanced active-matrix driving schemes will produce stunning displays, made possible fundamentally by an unconstrained diversity of materials and devices inside the pixel provided by mass-transfer micro-assembly. 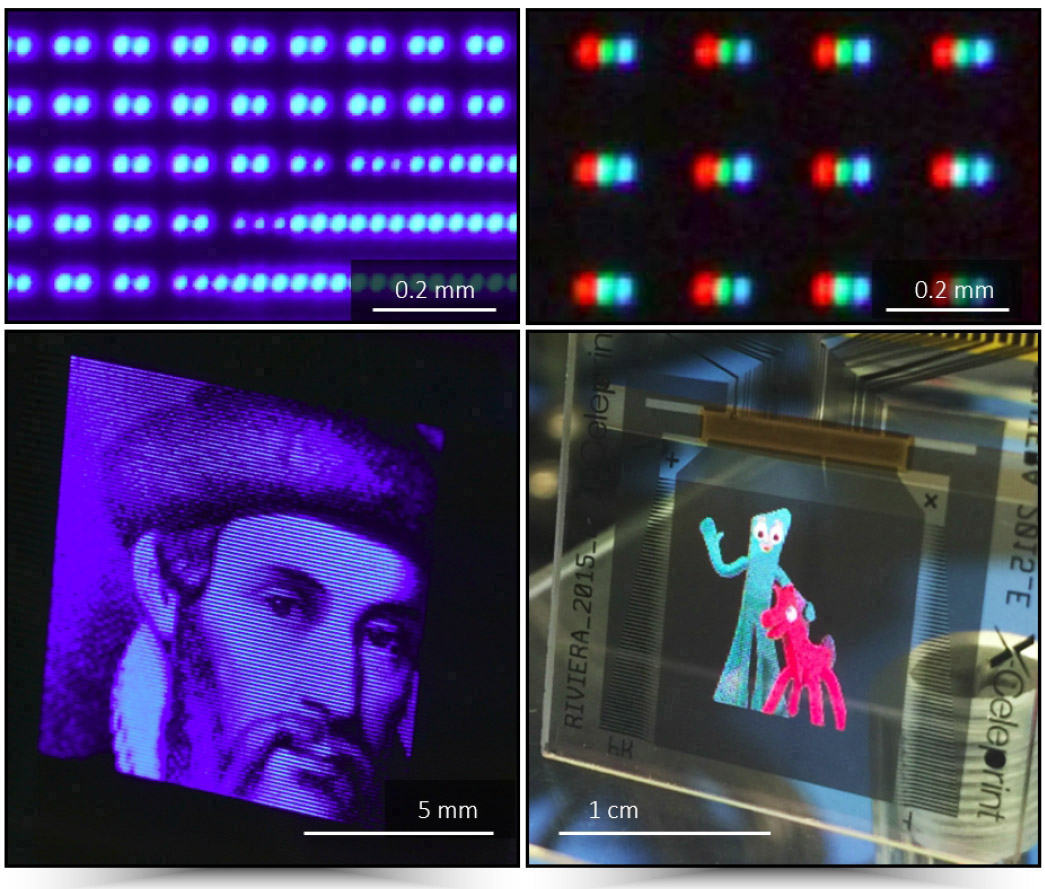 In the flat panel displays that are coming soon, the best emitters can simply shine brightly. The huge flexibility in function from smart, system-on-panel architectures makes it difficult to know just what these displays will be, other than simple, diverse, powerful, and beautiful. At X-Celeprint, we currently work with LED makers, panel makers, and producers of consumer electronics to advance the state-of-the-art in micro-assembly for all display applications.