The enduring search for innovative materials, as solutions for the fabrication of advanced micro-optics, remains a crucial part in achieving the commercial success of emerging production technologies. In this regard, innovative optical polymers pave the way for easy, cost-effective, and reliable fabrication of micro-optical devices. To enable a broad range of applications, however, it is necessary for these materials to satisfy numerous requirements. These requirements derive from both the initial processing itself (e.g., the need for broad and reliable process windows) and from the final application (e.g., the need for transparency at a certain wavelength or wavelength bands, as well as non-yellowing, specific refractive index, and high-temperature stability properties).

On the basis of Fraunhofer-Gesellschaft's ORMOCER® technology, UV-curable inorganic-organic hybrid polymers have become established materials that are used in industry for a variety of optical applications (e.g., microlens arrays, diffractive gratings, and wafer-level optics).1 These hybrid polymers consist of inorganic and organic components that are covalently bonded at the molecular level. The materials thus exhibit a combination of the favorable properties of both material classes and satisfy many different requirements for industrial micro- and nanofabrication. In addition, these materials can be processed with the use of standard UV-exposure setups,2, 3 as well as UV-molding and laser lithography systems,4 which means they can be implemented into mass-production environments. Since their original commercialization in the early 2000s, our team at microresist technology GmbH has achieved a continued upscaling in production volume of these hybrid materials. As a result, a total volume of these materials of more than 1000kg has now been produced and they are supplied to a constantly growing number of users and consumers worldwide (in academia and industry). These innovative hybrid materials are therefore a viable consumable for industrial fabrication of hybrid polymeric micro-optics.5 Direct fabrication of individual high-precision 3D photonic structures from the hybrid materials, however, is currently limited by the available generic techniques (including UV lithography, UV molding, and laser-direct writing).

To further extend the potential applications of UV-curable inorganic-organic hybrid materials, we have thus investigated the fabrication of optical interconnects made from these materials.6 For this work, which we conducted in collaboration with Multiphoton Optics GmbH (MPO),7 we used the two-photon absorption (TPA) lithography technique4, 8 because it allows the direct fabrication of individual high-precision 3D photonic structures. In the first part of the study (at MPO), we used TPA to fabricate different optical elements that have almost no limitation in shape or size. As an example, we show a 133μm-diameter Fresnel lens in Figure 1. 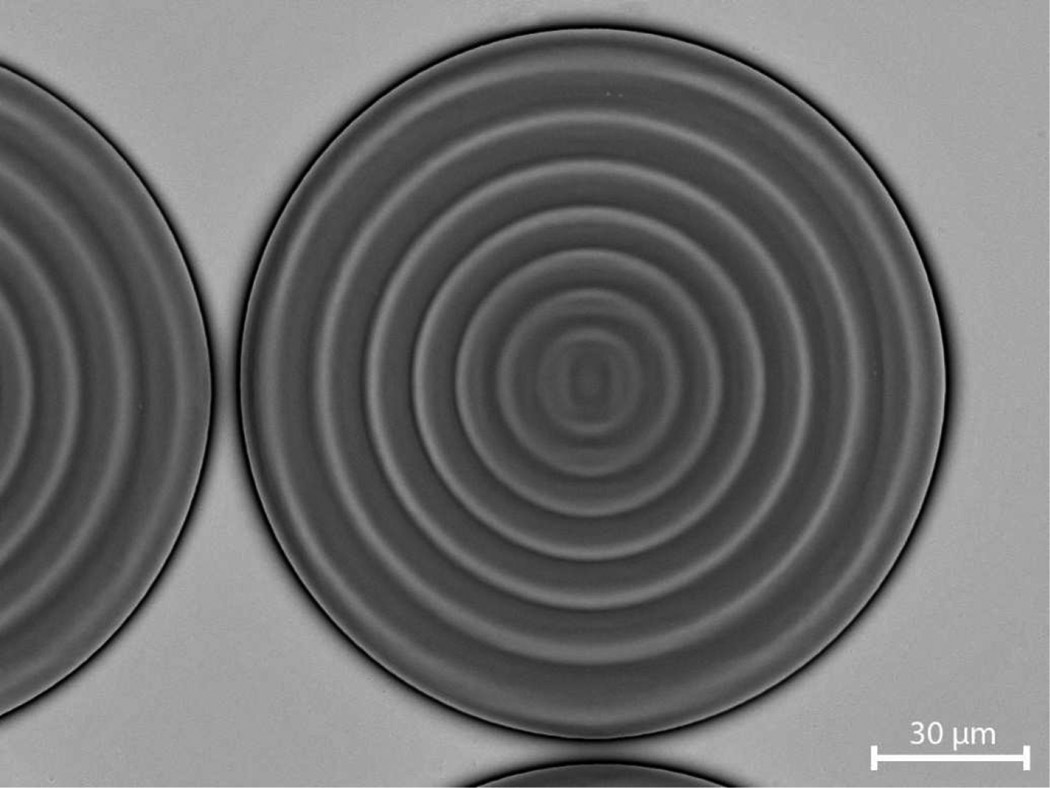 We have also developed new formulations of the hybrid polymers so that we can obtain ideal conditions for the fabrication process of single-mode and multimode waveguides. In our preliminary assessment, we found that some of our novel hybrid polymer formulations have a significantly increased processing window (i.e., where fabrication of waveguides is feasible and no material overexposure occurs) compared with generic formulations (i.e., commercially available hybrid polymers). For instance, in Figure 2 we illustrate the changes in lithographic performance (in terms of writing laser power and writing velocity) of our TPA-modified hybrid polymers that we can achieve in the high-precision 3D-printing process.

Figure 2. Illustration of the lithographic performance of TPA-modified ORMOCER-based hybrid polymers that can be achieved in a high-precision TPA 3D-printing process. In both plots the exposure dose (power) is plotted as a function of the writing speed (velocity) and the colored (blue) area indicates the available processing window, i.e., where no material malfunction (such as blistering) occurs. In (a) there is only a limited process window. In (b), however, the process window has been substantially increased by altering the photoinitiator (the same base material was used in both cases). The material in (b) was used as the novel TPA-adapted hybrid polymer system in this study.

As a proof-of-principle, we fabricated a specimen to demonstrate pitch adaption (see Figure 3). This demonstrator consisted of six waveguides, and we adapted its pitch from 125 to 62.5μm (left to right). The embedded 3D waveguides in this structure were written over a 500μm gap between two glass substrates. In this way we were able to ‘simulate’ a chip-to-chip connection and demonstrate that 3D waveguides—which form a connection between different optical elements—are feasible in adapted hybrid polymers. This optical interconnect technique is a promising candidate for implementation in industry because it can be used as substitute for the tedious process of actively and passively aligning different optical elements within assemblies. Our process is more simplified because it only requires passive alignment and consists of three processing steps: that is, coating of the components with the hybrid polymer resin, pre-exposure of the polymer material via a UV-flash exposure, and fabrication of the waveguides via the TPA process. 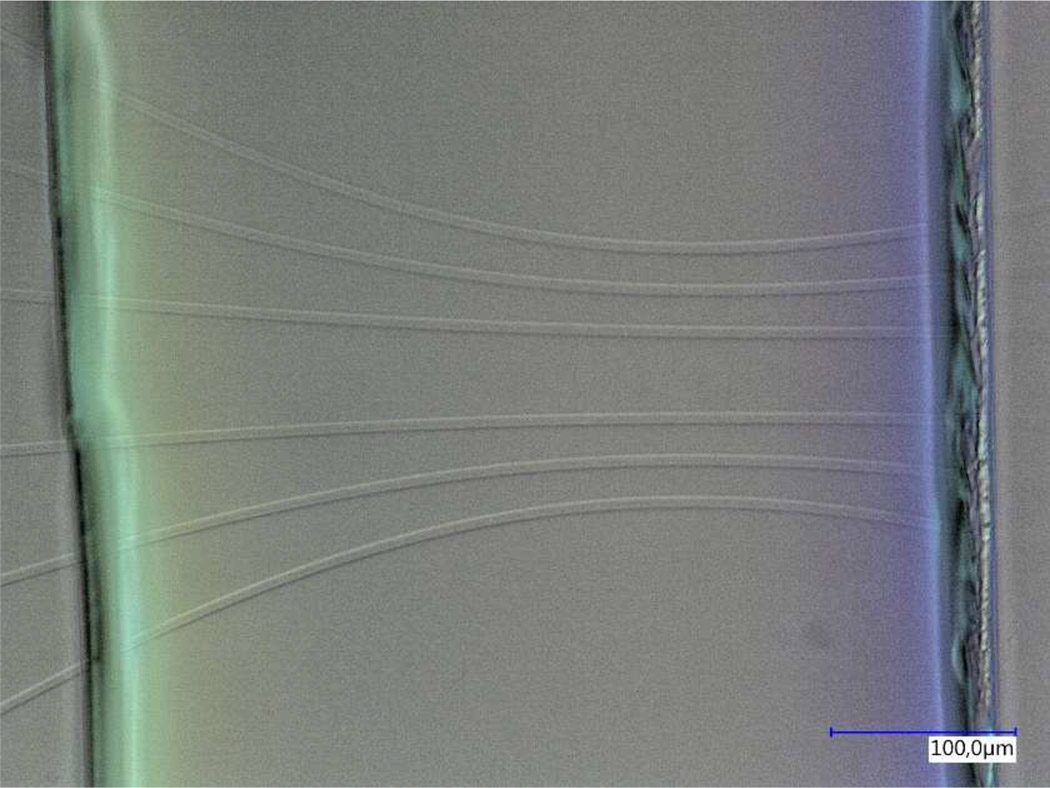 Figure 3. Top-view optical microscope image of six waveguide cores embedded in a cladding matrix of an ORMOCER-based hybrid polymer. The pitch of the waveguides has been adapted from 125 to 62.5μm (left to right). As a proof-of-principle for chip-to-chip coupling, the waveguides were fabricated on two glass substrates (with a gap of about 500μm between them) at a height of 150–170μm. (Image courtesy of MPO.)

In another part of our work, we have investigated the generation of a high-precision 3D optical micropattern. In this basic parameter study we examined woodpile-like microstructures (see Figure 4), and we thus experimentally verified the large processing window of hybrid polymers. Furthermore, we observed different degrees of stiffness in the material, i.e., we categorized the structures of the woodpiles as ‘excellent’ or ‘collapsing.’ We observed ‘partly collapsing’ structures when the energy dose was too small to sufficiently cross-link the material (by TPA-induced polymerization), which may be an advantageous setting for facilitating applications where material flexibility is required. 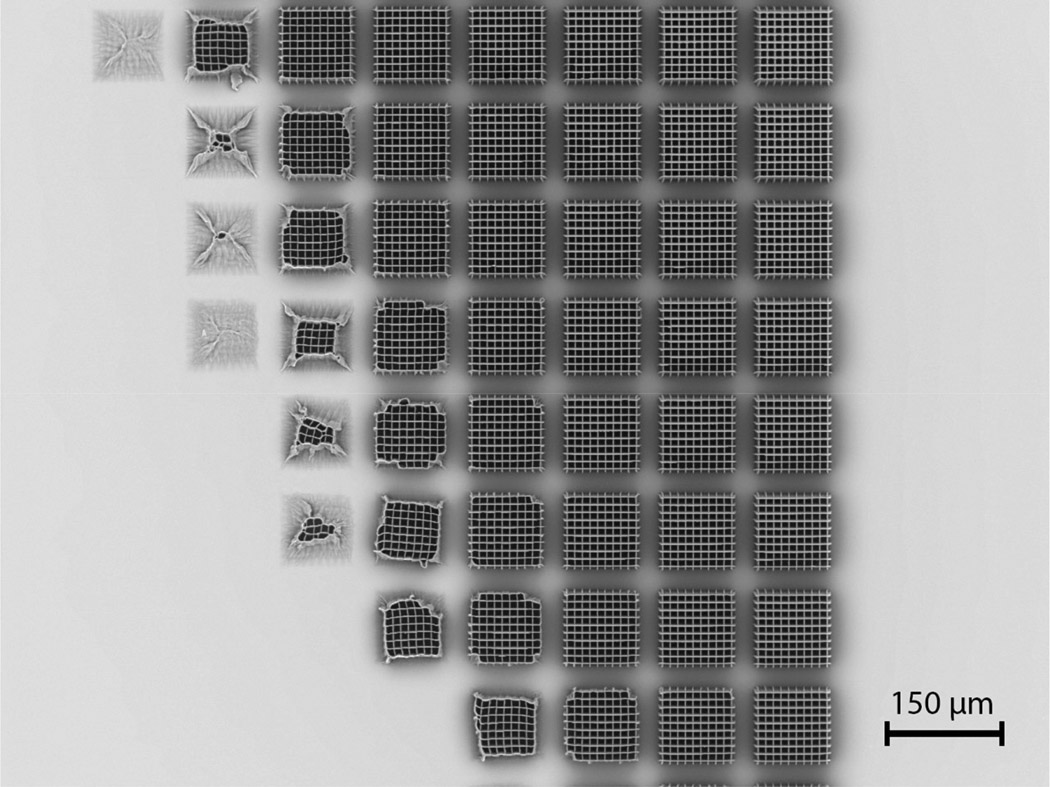 Figure 4. Top-view SEM image of a woodpile-like microstructure that has been exposed to varying extents by changing the TPA lithography parameters. From left to right, the average fabrication power was increased from 1 to 10mW. From top to bottom, the writing velocity was increased from 0.1 to 1mm/s. The total fabrication time was about 2 hours. This structure is thus an experimental verification of the broad processing window of the modified ORMOCER-based hybrid polymers. (Image courtesy of MPO.)

In summary, we have evaluated the properties of novel ORMOCER-based hybrid polymers that have been adapted for high-precision 3D printing by using TPA lithography. We found that some of our TPA modifications significantly increase the processing windows of the polymers compared to generic formulations. We thus selected certain TPA-tailored polymer materials for our demonstrations and characterizations. From these novel materials, we fabricated a number of advanced optical elements (e.g., pitch-adapted 3D-embedded waveguides and a woodpile-like optical micropattern). The results thus illustrate that hybrid polymers are not only viable materials for industrial fabrication of polymeric micro-optics (with the use of conventional processes such as UV molding), but that they are also potential candidates for fabricating optical waveguide systems (down to the chip level) when emerging and innovative manufacturing techniques based on TPA are eventually implemented in industrial environments. ORMOCER-based hybrid polymers can therefore, because of their versatility, continue to meet the increasing expectations of dynamically growing micro-optics markets. In our future research we will further investigate the perspective of system integration because the hybrid polymers may facilitate mix-and-match approaches (i.e., where advanced TPA-based processing is combined with generic photolithography or inkjet printing).

Arne Schleunitz received his PhD from the Karlsruhe Institute of Technology (Germany) in 2009 and was a postdoctoral researcher at the Paul Scherrer Institut (Switzerland) until 2012. With his in-depth knowledge of nanolithography processes, he joined micro resist technology as head of technology management. He was promoted to chief technology officer in 2016.

Jan Klein earned his PhD in organic chemistry from Humboldt University of Berlin (Germany) in 2011. He has since been working as a research scientist and project leader at micro resist technology, with goal of innovating the field of hybrid polymers. In 2013 he became the product manager for hybrid polymers.

Ruth Houbertz is a physicist and has been the chief executive officer and managing director of Multiphon Optics since 2014. She obtained her PhD from the University of Ulm, Germany, in 1993, and between 1993 and 1999 she went on to build a team at the University of Saarbrücken, Germany. She then held different technical and management positions at the Fraunhofer Institute for Silicate Research, Germany, between 2000 and 2012, and from 1999 to 2000 she worked at Sandia National Laboratories, CA. She holds more than 90 patents and has received numerous awards, including the Joseph von Fraunhofer Award in 2007, the Green Photonics Award in 2013, and the Cowin Award of Entrepreneurship in 2014.

Alexander Krupp studied physics at the Technical University in Munich (Germany) and received his diploma at the Walther-Meißner-Institute for Low-Temperature Research (Germany) in 2010, where he studied ferromagnetic Heusler compound thin films. In 2014, he finished his PhD on ultracold rubidium Rydberg atoms and molecules in Stuttgart (Germany). Since 2015 he has been a dedicated application engineer at Multiphoton Optics.