Among the nonlinear behaviors exhibited by light, second-harmonic generation (SHG)1 is one of the most important. In SHG, the frequency of an incident light beam is doubled inside of a nonlinear crystal: see Figure 1(a) and (b). SHG is nowadays employed in many applications, including laser sources and nonlinear microscopy. 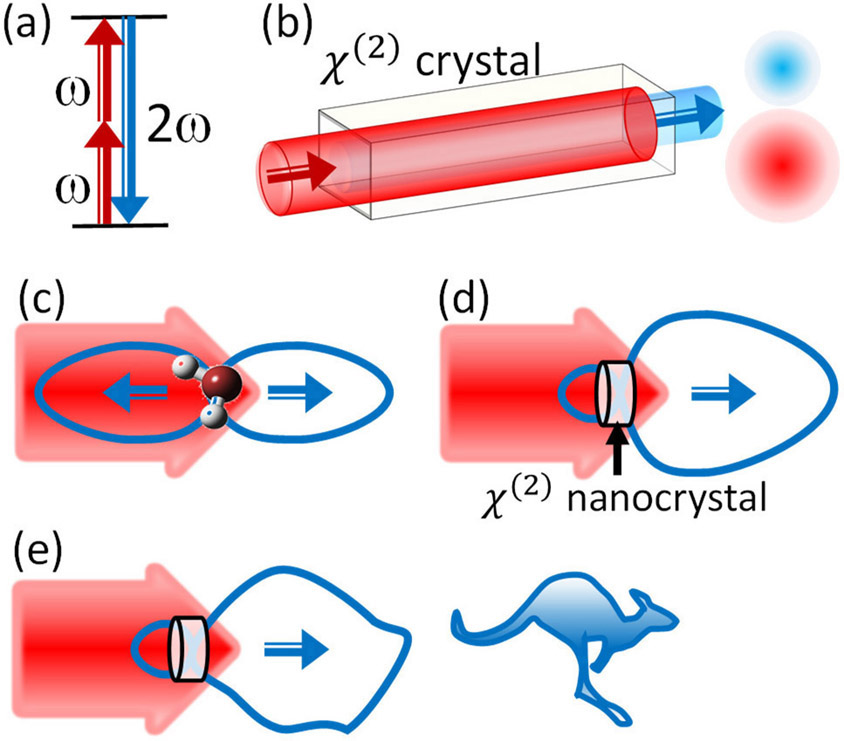 Figure 1. (a) Schematic of the nonlinear process of second-harmonic generation (SHG), which doubles the frequency of light in a crystal. (b) A conventional SHG process within a bulk nonlinear crystal, generating a blue Gaussian beam in the forward direction. (c) SHG from small objects, such as anisotropic molecules, is emitted in both forward and backward directions, resulting in a dipolar radiation pattern resembling a figure eight. (d) For larger nanocrystals, the emission can differ in forward and backward directions due to the interference of several resonant modes (multipoles) inside the nanocrystal. (e) Our goal of initiating SHG within small nanocrystals to design a radiation pattern that creates a complex beam shape (e.g., a kangaroo) with high conversion efficiency. ω: Angular frequency. χ(2 ): Second-order susceptibility.

SHG usually relies on bulk nonlinear crystals—see Figure 1(b)—such as lithium niobate, potassium titanyl phosphate, or beta barium borate. Unfortunately, these materials are difficult to integrate with other devices (due to the difficulties inherent in their manufacturing and machining) and are not cost-effective. Furthermore, special phase-matching conditions are often required in order to obtain useful conversion efficiencies. Although the output beam profile in bulk crystals can be engineered by complex periodic poling,2 this technique is not easily accessible (due to its requirement for a spatially inhomogeneous distribution of high voltages across the crystals).

To overcome these issues, it would be useful if we could replace bulk nonlinear crystals with ultrathin surfaces composed of nanocrystals that can generate SHG with high efficiency. Such nonlinear ‘metasurfaces’ could also be used to manipulate the SHG radiation pattern to form complex beams with arbitrary patterns: see Figure 1(c–e). This may sound like science fiction, but optical technology is rapidly advancing toward achieving such aims. The first proof-of-principle theory3, 4 has been carried out, and experiments5–7 have been conducted.

In our work,7 we show that by exploiting SHG in aluminum gallium arsenide (AlGaAs) nanocrystals, we can generate complex beams (in particular, donut beams with radial polarization). Beams such as these could find application in nonlinear microscopy, secure nonlinear holography, and advanced laser displays.

SHG can be observed from small anisotropic molecules—see Figure 1(c)—but the efficiency is very low. This is because SHG is emitted in both forward and backward directions from the excitation beam, thus reducing the power that can be collected by an optical system (e.g., a microscope). To discover whether the SHG efficiency of nano-objects can be as large as from bulk crystals, we carried out scattering experiments with resonant nanoparticles. Since the electric field inside of nanoparticles can be dramatically increased by resonance excitation, and because the SHG signal depends quadratically on the electric field (P2ω∼χ(2)EX×EZ, where P2ω is the induced second-harmonic dipole per unit volume, χ(2) is the quadratic nonlinear susceptibility, and EX and EZ are the electric field vectors in the X and Z directions, respectively), the SHG signal can be enhanced multifold using this approach. To be precise, the overall SHG signal is dependent on the quality factor of the resonance at the fundamental wavelength, the quality of resonances at the second harmonic (SH), the strength and symmetry of the χ(2) tensor, and the overlap of the fields at the fundamental and SH wavelengths. By maximizing all these factors simultaneously, we can ultimately achieve higher efficiencies in very small nanocrystals.

By properly engineering the modes of the nanocrystal, we could also design the SHG radiation pattern and manipulate it in forward—see Figure 1(d)—or backward directions, thus enhancing the collection efficiency of the optical system. This enhancement arises because of the interference between the different modes that are excited in the nanocrystal at the SH wavelength. Such multipolar engineering is at the forefront of research in nonlinear nano-optics and promises to enable the generation of complex images by exploiting the SHG process, as illustrated schematically in Figure 1(e).

Indeed, SHG from resonant plasmonic nanostructures has been a subject of intense interest over the past 10 years.8 However, the SHG conversion efficiency remains small (∼10−11), being limited largely by plasmonic losses and the low damage threshold of metallic nanostructures due to their heating. To overcome these problems, we have explored the nonlinear effects of resonant high-index dielectric nanostructures,9 and have demonstrated third-harmonic conversion efficiency of up to 10−6 in silicon nanodisks. Although dielectric silicon nanostructures have shown large improvements in terms of their conversion efficiency, the second-order (strongest) nonlinear effects are nonetheless prohibited in silicon because of the inversion symmetry of its crystalline structure. Therefore, in order to further improve the conversion efficiency, we require special nanocrystals with specific properties, i.e., a high refractive index (to enable high-quality factor resonances), a lack of inversion symmetry in the crystalline lattice (to enable second-order nonlinear effects), a large χ(2), and transparency in the near-IR spectral region. Only one material—GaAs and its compounds—matches these criteria.

Unfortunately, existing fabrication techniques cannot achieve high-resolution GaAs nanostructures on a low-index transparent substrate. Recent work5, 6 has attempted to resolve this problem by implanting an aluminum oxide layer underneath the AlGaAs nanodisks, but the position of the GaAs handle wafer prevents SHG measurements in both forward and backward directions. In our work,7 we therefore implement a novel fabrication procedure for an AlGaAs-in-insulator. In this way, the AlGaAs crystals are fully embedded into the polymer, thus facilitating control over the directionality of the emitted second-harmonic radiation. Our method is based on epitaxial growth in conjunction with a bonding procedure that enables application of the layer to a glass substrate, as illustrated in Figure 2. First, AlGaAs nanodisks are defined on a GaAs wafer via electron-beam lithography and sequential etching. Silicon dioxide (SiO2) is used as a mask and aluminum arsenide (AlAs) as a buffer layer. Subsequently, the nonadhesive surface is formed with a Cl2 treatment, which is followed by sequential removal (with hydrofluoric acid) of the SiO2 mask and AlAs buffer layer. The wafer is then coated with a benzocyclobutene (BCB) layer. The BCB is subsequently thermally cured and bonded to a thin glass substrate, and the AlGaAs nanocrystals that are embedded in the BCB are peeled off. With this unique approach to fabrication, we were able to fully explore the efficient SHG of AlGaAs nanostructures that arises due to the resonant behavior and emission (i.e., in a preferential direction) of the nanostructures.

A schematic of our SHG experiment is shown in Figure 3(a). First, we focused an incident laser beam onto a single AlGaAs nanodisk (resonant at a pump wavelength of 1556nm). We then measured the generated SH signal in both forward and backward directions for disks of different diameters to determine the SHG collection efficiency. In this way, we achieved collection efficiencies as high as 8.5×10−5: see Figure 3(b). Furthermore, because the total SHG efficiency exceeds 10−4, we were able to obtain a radiation diagram and information about the polarization of the emitted SH. We find that the measured radiation patterns are not simply Gaussian, as in bulk crystals, but instead exhibit a donut shape—see Figure 3(c) and (d)—and have a complex polarization distribution.7 Importantly, the polarization in the forward direction is radial, thus forming a well-known vector-beam distribution that provides a 3D focal field pattern and is often used in super-resolution microscopy. This vector-beam distribution allows single-shot lateral position sensing and achieves localization accuracies of down to a few angstroms. 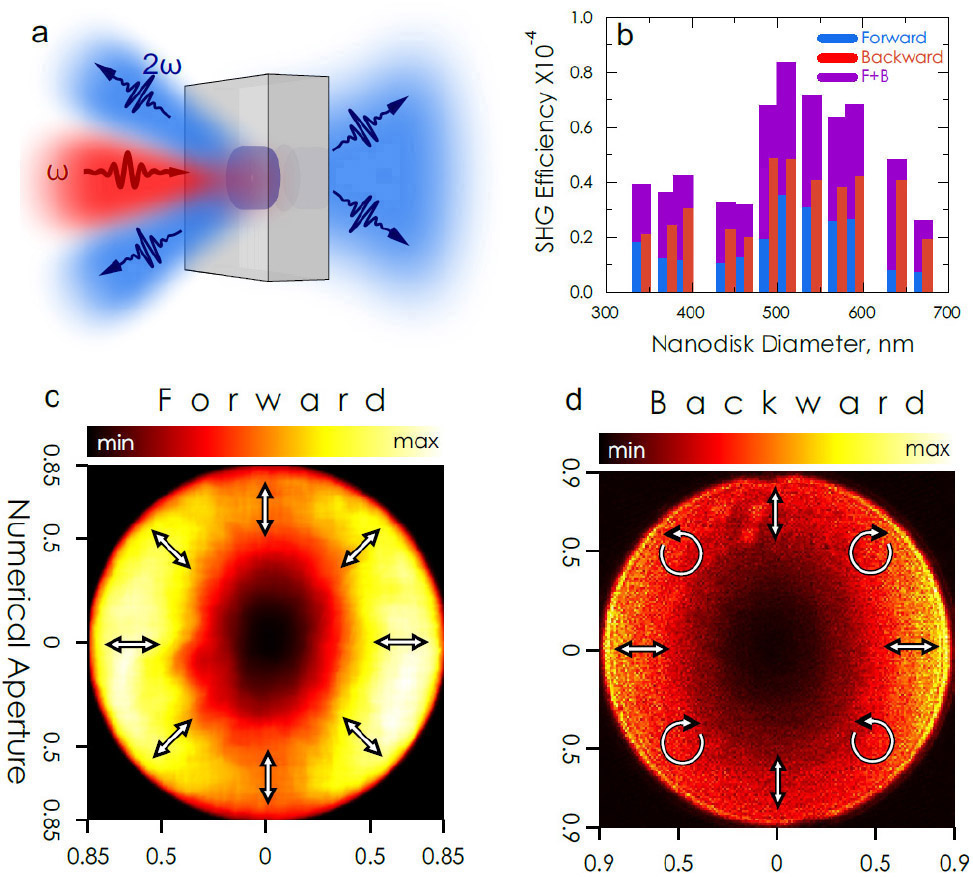 We have shown that AlGaAs nanocrystals fabricated on a glass substrate not only enable a nonlinear conversion efficiency exceeding 10−4, but also provide an opportunity to define the beam shape and polarization in both forward and backward directions. The generation of complex and high-efficiency vector beams offers unique opportunities for a number of novel applications (e.g., nonlinear microscopy, ultrasecure nonlinear holography, sum-frequency and difference-frequency generation, spontaneous parametric downconversion, and parametric amplification). It may even be possible to place nonlinear metasurfaces that can convert IR to visible light onto eyeglasses (i.e., enabling night vision). A wide range of opportunities lie ahead, but much research remains to enable a deep understanding of the physics of nonlinear frequency conversion at the nanoscale. We are now working on further approaches to increase the nonlinear efficiency, and thus pave the road toward industrial applications. To this end, we are currently working on engineering the material and the exact shape of the nanocrystals.

Dragomir Neshev is a professor of physics and the leader of the Experimental Photonics Group at the Nonlinear Physics Centre. His activities span several branches of optics, including nonlinear periodic structures, singular optics, plasmonics, and photonic metamaterials.