A new method is used to control the plasmonic resonance properties of gallium-doped zinc oxide so that its efficiency is maximized at desired wavelengths.
16 August 2017
David C. Look

Surface plasmon polaritons (SPPs) are electromagnetic waves that arise when a plasmon wave1–5 (i.e., a coordinated swarm of electrons) interacts strongly with a light wave of a similar frequency (ω), and together they are confined to, and propagate along, an air/metal interface. SPPs are of substantial interest because it is possible to control and modify them with the use of normal circuit elements, to allow the SPP to be ejected as pure light. In addition, the dimensions of SPPs are much smaller in metals than in air, and so the usual diffraction limit of light in air does not apply. The confinement property of SPPs—which can lead to intense electric fields and enhanced light emission—is thus exploited in a number of applications, including surface-enhanced Raman spectroscopy (which has a higher resolution than standard Raman spectroscopy). The metals that are generally used in plasmonic applications (gold and silver), however, are not ideal for all energy ranges. Although these materials have high electron concentration (n) values (mid-1022cm−3), and work well in the UV (3–12eV) and visible (1.5–3eV) ranges (because ωp∼n1/2), they experience heavy losses in the near-IR region (0.5–1.5eV). This is because the loss is proportional to n/ωμ (where μ is electron mobility), and the high value of n cannot be avoided.

In response to this problem, it has previously been proposed1–3 that highly doped semiconductors, with smaller n values, may be better plasmonic materials (than the standard gold and silver) in the near-IR (NIR) region. Fortunately—mainly because of the need for transparent electrodes in LEDs, display circuits, and solar cells—the field of highly doped semiconductors is well developed.6 However, the goal in transparent electrode design is generally to have the highest possible n, whereas in plasmonic applications, it is to have the lowest possible n, but that is still high enough to produce the desired resonance wavelength (λres). The best possible material is therefore one with a value of n that can be easily modified to achieve optimum performance.

Following this idea, we have explored the use of gallium-doped zinc oxide (GZO) as a high-performance plasmonic material in the NIR region.7 Indeed, we have produced this material with an n value of 1.46 × 1021cm−3, which gives rise to a plasmonic resonant energy (Eres) of 1.18eV (i.e., λres of 1050nm).4 We find that the relative loss of GZO at 1050nm is lower than that of silver (with n = 5.9 × 1022cm−3) by a factor of ≈40. GZO is thus a preferable material at this wavelength for plasmonic applications. Another advantage of semiconductor materials, such as GZO, is the ability to control n and thus λres. This property means that we can use GZO to achieve any n < 1.5 × 1021cm−3, which translates to any λres > 1050nm.

In actual plasmonic applications it is usually desirable to achieve a particular λres. For example, at the standard telecommunications wavelength of 1.55μm, an n of 6.0 × 1020cm−3 is required. To realize this value of n, however, it is necessary to vary the semiconductor growth conditions, which is a very time-consuming, labor-intensive, inefficient, and expensive option. In our work, we have therefore developed an alternative approach in which we start with a sample that has n > 6.0 × 1020cm−3. We then place this material in an open tube that contains flowing argon, and we heat it in increasing temperature steps (10°C intervals) until n is reduced to the desired value (i.e., 6.0 × 1020cm−3 in this case).

We show the results of our plasmonic resonance control method for a particular sample in Figure 1. In this example, the GZO sample had an initial n of 8.2 × 1020cm−3 and a Hall mobility (μH) of 27cm2/V-s (giving a λres of 1.35μm). We annealed the sample in five 50°C steps (between 300 and 500°C), and after each step we removed the sample to make another Hall-effect measurement. After the 500°C anneal, we found that n had decreased to 6.0 × 1020cm−3, μH had increased to 38cm2/V-s, and λres had increased to 1.55μm (i.e., the desired value). Although this ‘calibration’ process took a few hours to complete, it was possible to immediately produce further 1.44μm samples by annealing only at 500°C.

To supplement our Hall-effect measurements, we also use nondestructive optical techniques to characterize our samples. For example, we plot the spectroscopic reflectance (Rm) and transmittance (Tm) for our unannealed GZO sample as a function of light energy in Figure 2.8,9 We note that Tm becomes very small at energies greater than 3.8eV (because of band-gap absorption) and for energies less than 1eV (because of the strong plasmonic reflectance). Indeed, this reflectance feature is one of the most obvious signatures of plasmons.

Figure 2. Measured reflectance (Rm) and transmittance (Tm) of the unannealed GZO sample, as well as its calculated reflection (R) and absorption (α) coefficients. All values are shown as a function of energy (E).

To fully understand our GZO material, however, it is necessary to determine its reflection and absorption coefficients (R and α, respectively). We have therefore recently derived closed-form expressions for these quantities in terms of Rm and Tm.8, 9 Although, in principle, our equations only give exact values of α and R for single slabs of material, they are actually quite representative of our GZO film in the two regions of most interest (i.e., at E > 3.8 and < 1eV). In these regions our derivation of α is still accurate, which is especially useful for creating so-called Tauc plots (to determine the optical band gap). We also note that our α derivation is more accurate than common expressions found in the literature. We provide Tauc plots for our GZO before annealing and after annealing at 550°C in Figure 3. From these plots, we can see that the optical band gaps are 3.90 and 3.46eV, respectively. This demonstrates that strong Moss-Burstein band filling occurs in the unannealed sample (because of its extremely high n). In addition, we have used Drude theory5 to fit our calculated R. The resultant fit (see Figure 4) yields an optical n and μ of 8.92 × 1020cm−3 and 30.0cm2/V-s, respectively. These numbers are quite close to those we obtained with Hall-effect measurements, which demonstrates that the scattering mechanisms for DC and IR conduction are similar. 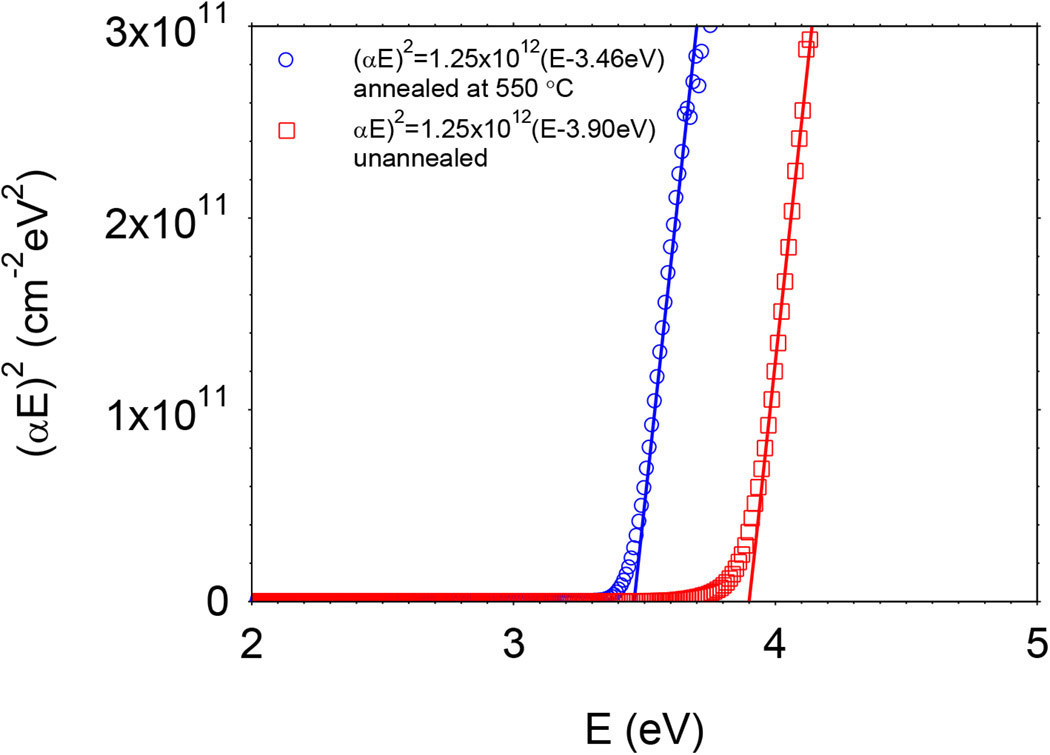 Figure 3. Tauc plots for the GZO sample before annealing and after annealing at 550°C. Band gap values of 3.90 and 3.46eV for the unannealed and annealed samples, respectively, are derived from the fits of these plots. 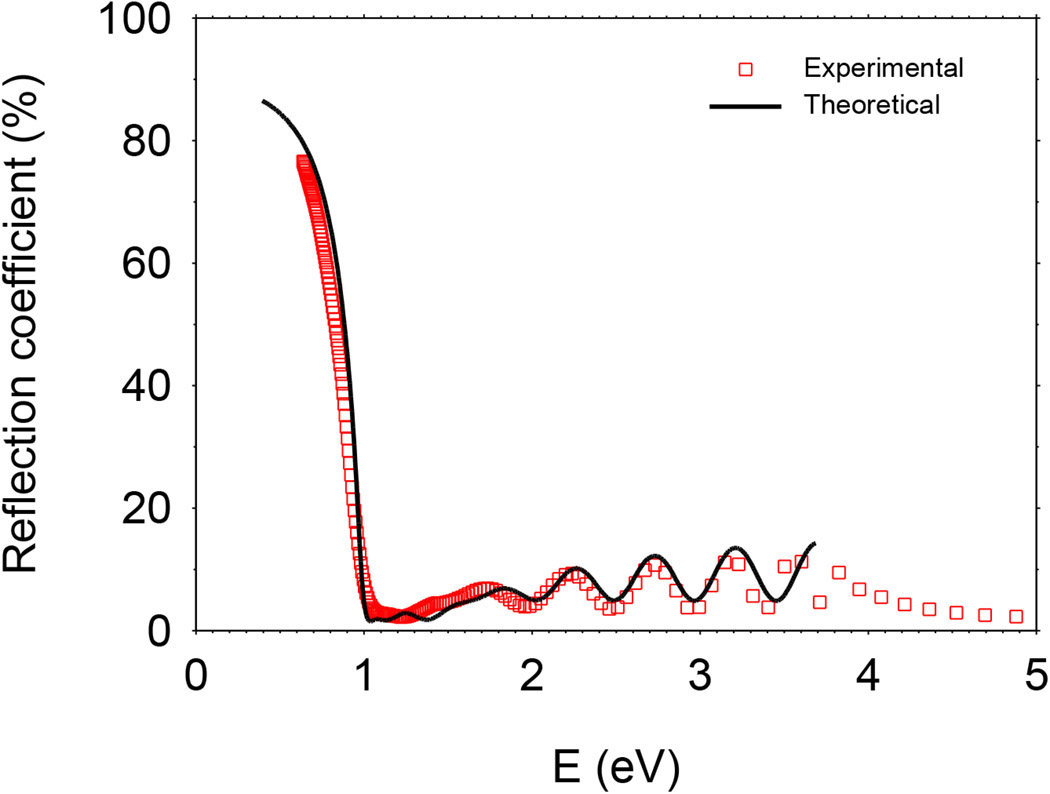 In summary, we have investigated the use of a GZO semiconductor as a low-loss plasmonic material at NIR wavelengths. We have also developed a novel method to control the plasmonic resonance properties of the material at specific wavelengths. In our future studies we hope to conduct in situ reflectance during the semiconductor growth process. Indeed, the strong reflectance feature that we observed at about 1eV in Figure 4 is very sensitive to both electron concentration and electron mobility (especially the former). We should thus be able to monitor, and even control, the growth conditions to achieve desired plasmonic properties.

David Look is senior research physicist and director of the Semiconductor Research Center. His research is focused on measuring and modeling electrical and optical properties of semiconductor materials.