Polarization as a new dimension in super-resolution microscopy

The idea of using super-resolution to improve imaging resolving power was first proposed in 1995.2 This idea has since been realized, i.e., with a photobleaching-photoactivation process used to separate molecules (with a resolution of about 20nm) in the time domain.3 Previously developed super-resolution microscopy approaches, which extend vision beyond the diffraction limit, are mostly based on the intensity, wavelength, and temporal dimensions of fluorescence. Although the fourth dimension of fluorescence, i.e., polarization, can also be used to modulate fluorescence (without restriction to specific fluorophores), this mode of super-resolution microscopy has only recently been investigated. Indeed, a new technique—sparse deconvolution of polarization-modulated fluorescent images (SPoD)—was first developed in 2014 (with which a resolution of 5nm was demonstrated at 1 frame/second).4 Although super-resolution can be achieved with this technique, the dipole orientation information is lost during the SPoD reconstruction and an interesting debate—whether or not fluorescent polarization can in fact be used to yield additional super-resolution information—has since ensued.5, 6 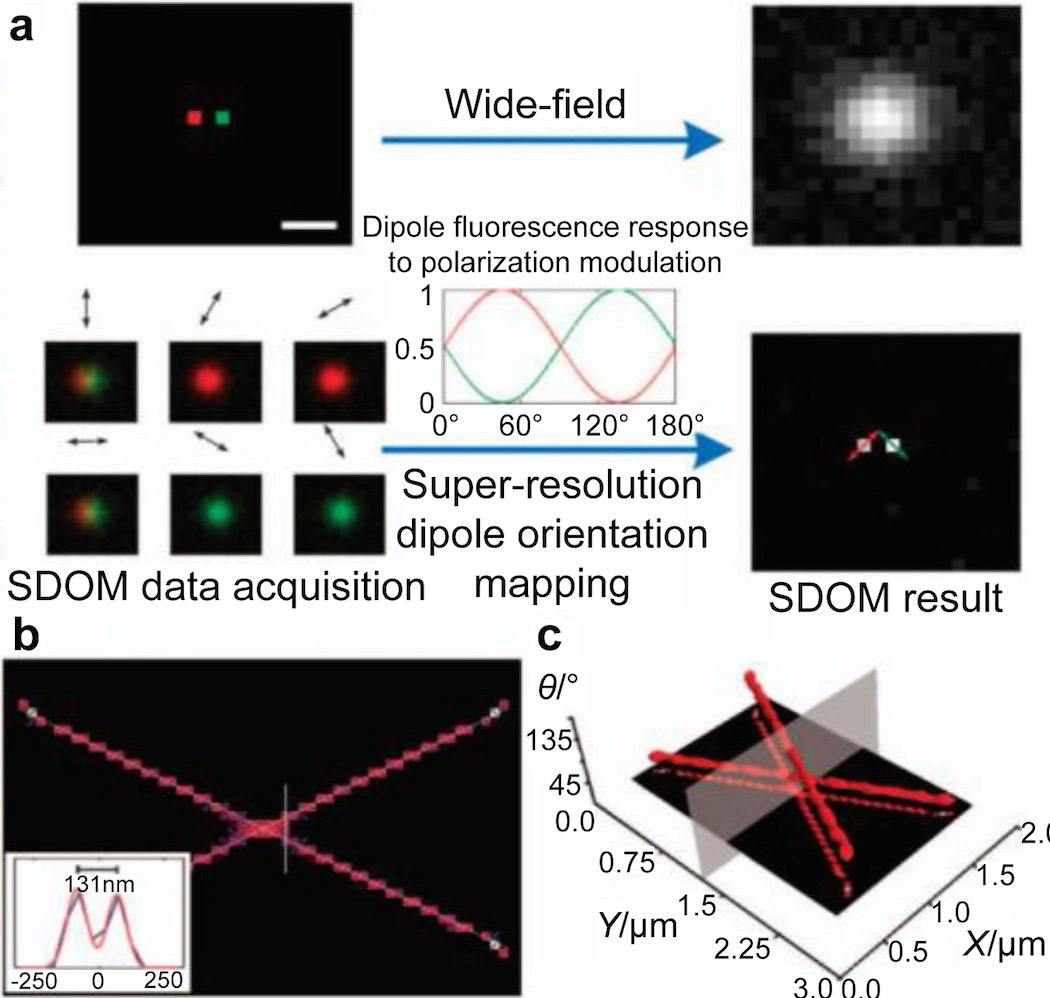 In our study we have compared equivalent results from both the SPoD and our own SDOM methods. As shown in Figure 2, no information is lost in our method (because of over-deconvolution) compared with the results of the SPoD approach. Moreover, our method provides the substantial advantage of achieving super-resolution imaging of fluorophore orientations. In particular, our imaging reveals that different borders of a dendritic spine neck in hippocampal neurons exhibit a heterogeneous distribution of dipole orientations. 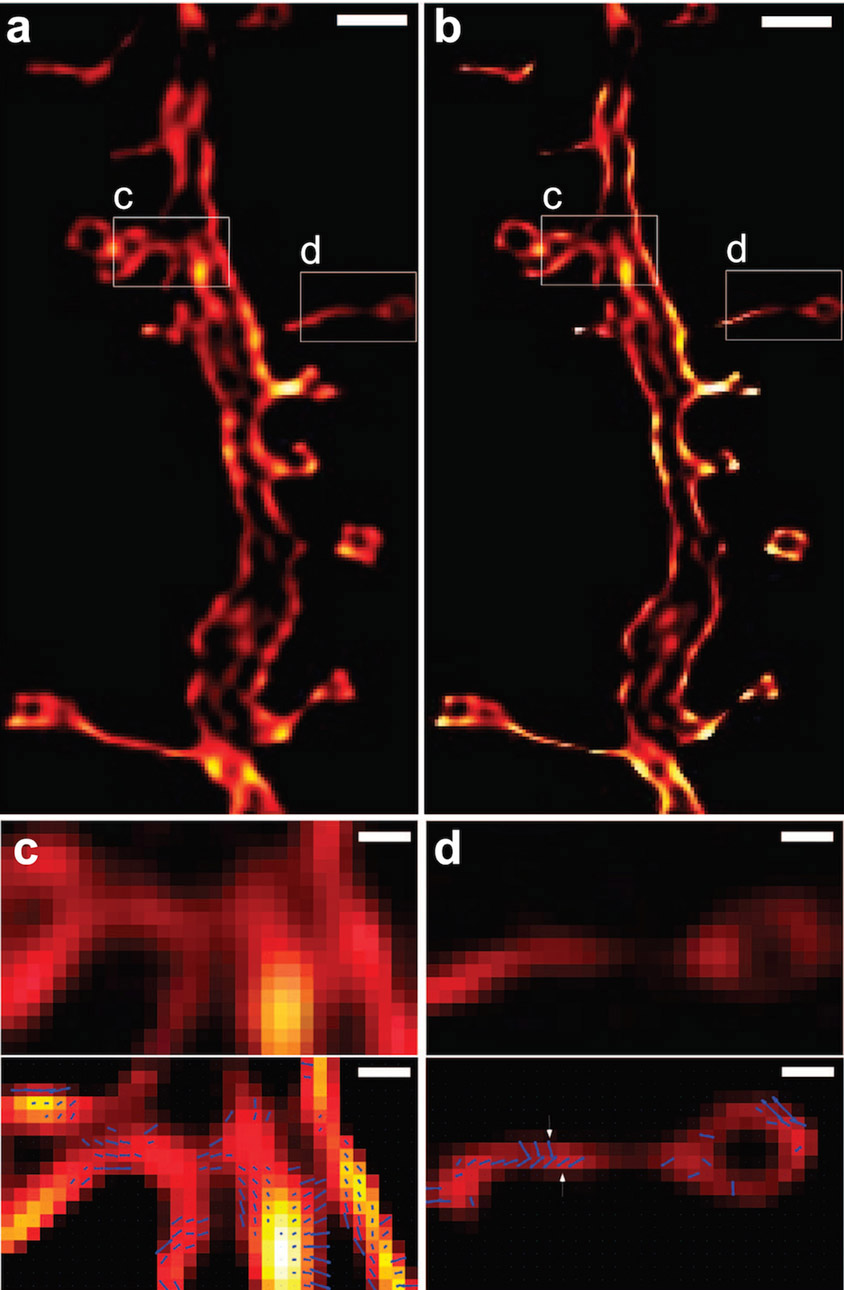 Figure 2. Comparison of results from (a) conventional sparse deconvolution of polarization-modulated fluorescent images (SPoD) and (b) SDOM for the same neuron data set.4Close-ups of the dipole orientation mapping from the boxes are shown in (c) and (d), where the SPoD and SDOM images are shown in the top and bottom panels, respectively. Arrows illustrate the dipole orientations.7

The very fast imaging speed (up to 5 frames/second) of our SDOM technology, coupled with its very low (milliwatt level) excitation-light power requirements, means that our approach is ideal for observations of living cells. We have thus used SDOM to image fluorophore-labeled septin (a protein) in living yeast (Saccharomyces cerevisiae) cells. A cross-sectional and a top-view image of the samples are shown in Figure 3, as both wide-field and reconstructed SDOM images. We observe the typical double-ring structure of the septin in the SDOM image, but it cannot be resolved in the wide-field image.

Figure 3. Top-view (a) and cross-sectional view (b) of a fluorophore-labeled protein in live yeast cells. A wide-field (top left) and SDOM (bottom right) image for both views is shown. Inset in (a) shows the fluoresence along the marked (dotted line) cross section. Scale bars denote 500nm.7

In summary, we have developed a new super-resolution imaging technique known as SDOM in which we use the polarization modulation of the excitation laser and demodulation of intensity and polarization to achieve improved spatial resolution (i.e., beyond the diffraction limit) and accurate dipole orientation detection. We have demonstrated that SDOM provides favorable results compared with the conventional SPoD technique, and we have used it to reveal several interesting observations of biological samples. In addition, the very fast imaging speeds and low power requirements associated with our technique mean that it is particularly suited to imaging living cells. Although SDOM can be used to successfully obtain super-resolution information with orientation mapping, it still has some limitations. As part of our future work, we will therefore establish additional algorithms to solve orientation and orientation-distribution issues at the super-resolution level. Despite recent disputes concerning the role of polarization in super-resolution imaging, our work is part of a continuing surge of interest in this topic.9–11

This work is part of a collaboration with the groups of Dayong Jin (University of Technology Sydney, Australia), and Jun-Tao Gao (Tsinghua University, China). To facilitate further development of this work, the developed code has been deposited on GitHub.

Peng Xi is an associate professor in the Department of Biomedical Engineering. His research interests are focused on optical super-resolution microscopy. He is a senior member of the Optical Society of America, is on the editorial board of several journals, and has published more than 50 scientific papers. His work has also been highlighted in Nature Photonics and Nature Methods.