Preamplifiers (i.e., electronic devices that amplify signals) are required in optical imaging and detection systems to increase weak current signals.1 If the detector itself can produce sufficient gain, however, the sensitivity of such devices may be able to overcome the limitations that are imposed by the thermal noise of electronics.

An internal amplification mechanism (i.e., impact ionization) has been used in photodetection for decades. In an avalanche photodiode—a reverse-biased p-n junction device that is operated at a voltage close to breakdown voltage,2, 3 APD—an ionization collision with the lattice—occurs when the photogenerated primary carriers acquire enough energy: see Figure 1(a). Secondary electron-hole (e-h) pairs are produced from this collision, which in turn cause additional ionization collisions as the pairs cross the depletion region (i.e., the ‘avalanche’ process). APD-based photoreceivers achieve sufficient sensitivity for fiber-optic communications. However, they require a high operation voltage (over 20V) and suffer from high excess noise with increasing gain. In devices with internal gain, interference originates mainly from shot noise that is amplified with the signal.4 The noise of these systems is best characterized by the excess noise factor (ENF), which is calculated from the fluctuation of the amplification gain.

In our work, we are proposing a new internal amplification mechanism called the cycling excitation process (CEP). This process relies on the transitions involving localized states, which are formed via dopant compensation within a p-n junction diode. The Coulomb interactions that occur between energetic carriers and these localized states have stronger efficiency since they relax the k-selection rule, thus enhancing the probability of new e-h pair generation. In the Auger process, illustrated in Figure 1(b), an electron from a localized acceptor state is excited to the mobile conduction band, thereby generating a higher-energy electron. The rate of this generation can be calculated quantum mechanically using Fermi's golden rule by considering Bloch waves for free electrons and hydrogen 1s orbitals for localized electrons. This calculation shows that the generation rate increases with an increasing reverse bias voltage: see Figure 2(a). 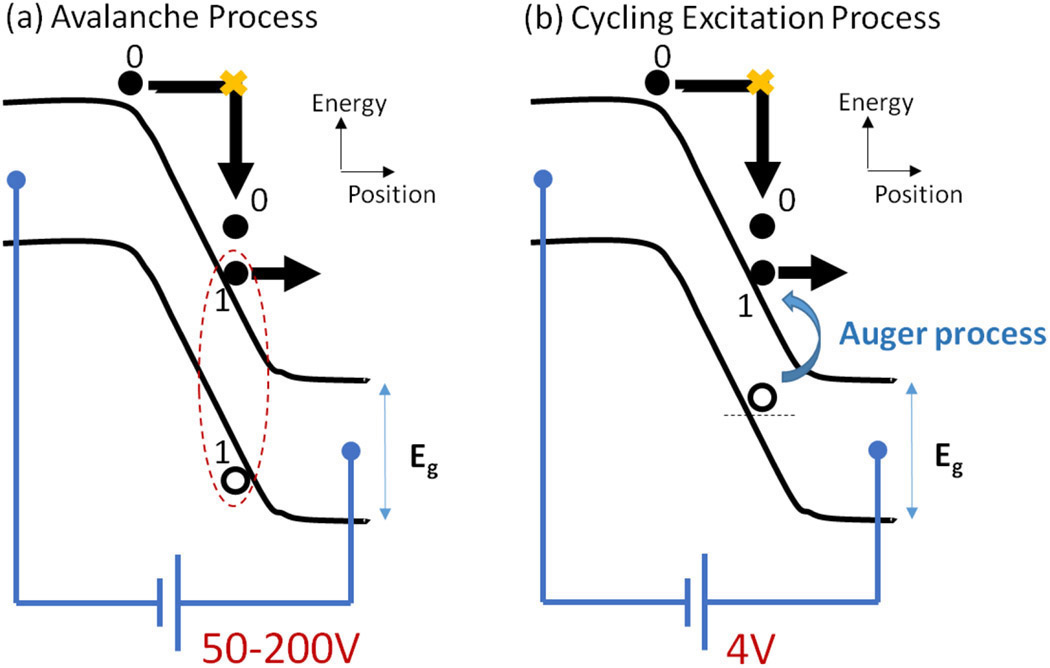 Figure 1. Schematic illustration of (a) the avalanche process and (b) the cycling excitation process (CEP). The former is based on impact ionization between the hot and the bound electron in the valance band. In contrast, CEP occurs as a result of the Auger process between a hot electron and an electron in the localized state in the dopant within the n-type region. Eg: Energy bandgap. 0: Primary carrier from direct photo absorption. 1: Carrier produced by Auger excitation. 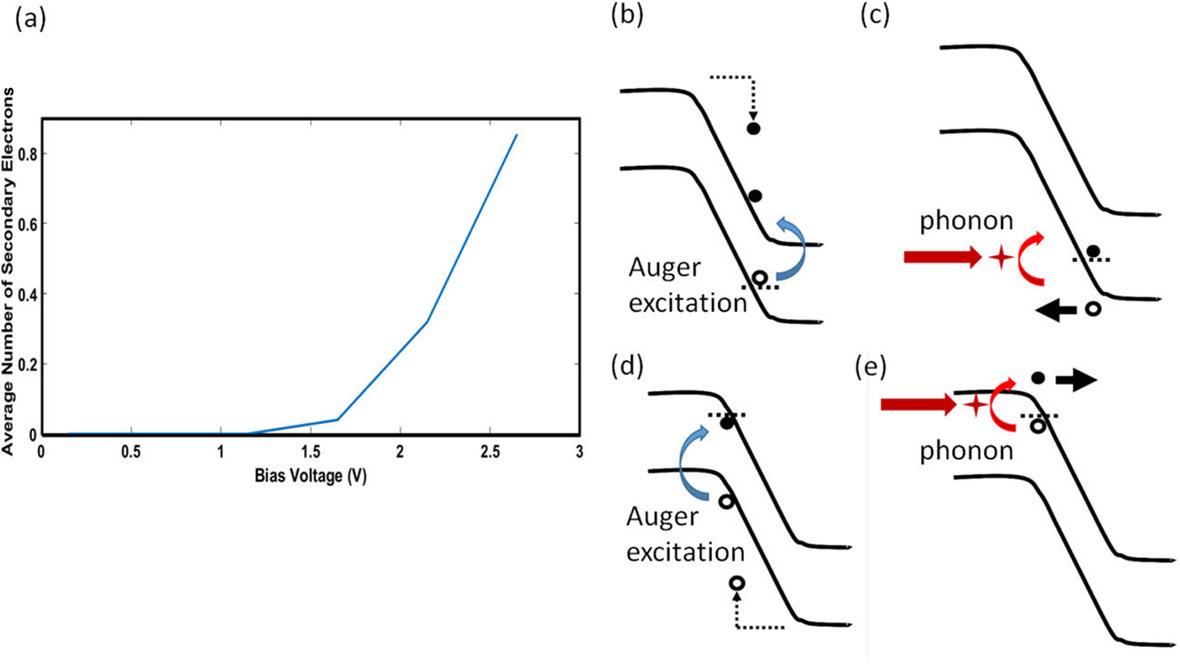 Figure 2. (a) Average number of secondary electrons generated as a result of the Auger process, calculated by Fermi's golden rule. (b) First photogenerated electron initiates the Auger excitation. Mobile hole formation via (c) phonon absorption. (d) Another Auger process occurs when the mobile hole traveling back to the junction area excites a new e-h pair. (e) Mobile electron formation via another phonon absorption.

Following the Auger process, the cycling process is carried out via phonon absorption—see Figure 2(b) and (c)—which transfers carriers from the localized band to the mobile band. Carrier-phonon interactions act as negative feedback, making the device perform stably and quietly and leading to significantly reduced noise. The hole that is left behind in an impurity state can be filled by a valence band electron via phonon absorption. Furthermore, the hole thus created in the mobile valence band travels back to the p-n junction, and a similar Auger excitation occurs to produce another e-h pair from compensating donor states in the p-type region, as illustrated in Figure 2(d) and (e). These processes continue to cycle, which gives the mechanism its name.

In order to realize CEP in a photodiode, we developed a compensated p-n junction structure: see Figure 3(a) and (b). In this device, the compensated dopants are incorporated in both p- and n-type regions. In the n-type region, for example, the Auger process is more probable from the acceptor states than from the valance band because of the former's localized wave function. We believe that this compensated doping structure can be applied in any semiconductor material, and have observed similar amplification processes in both silicon and gallium arsenide (GaAs) detectors. 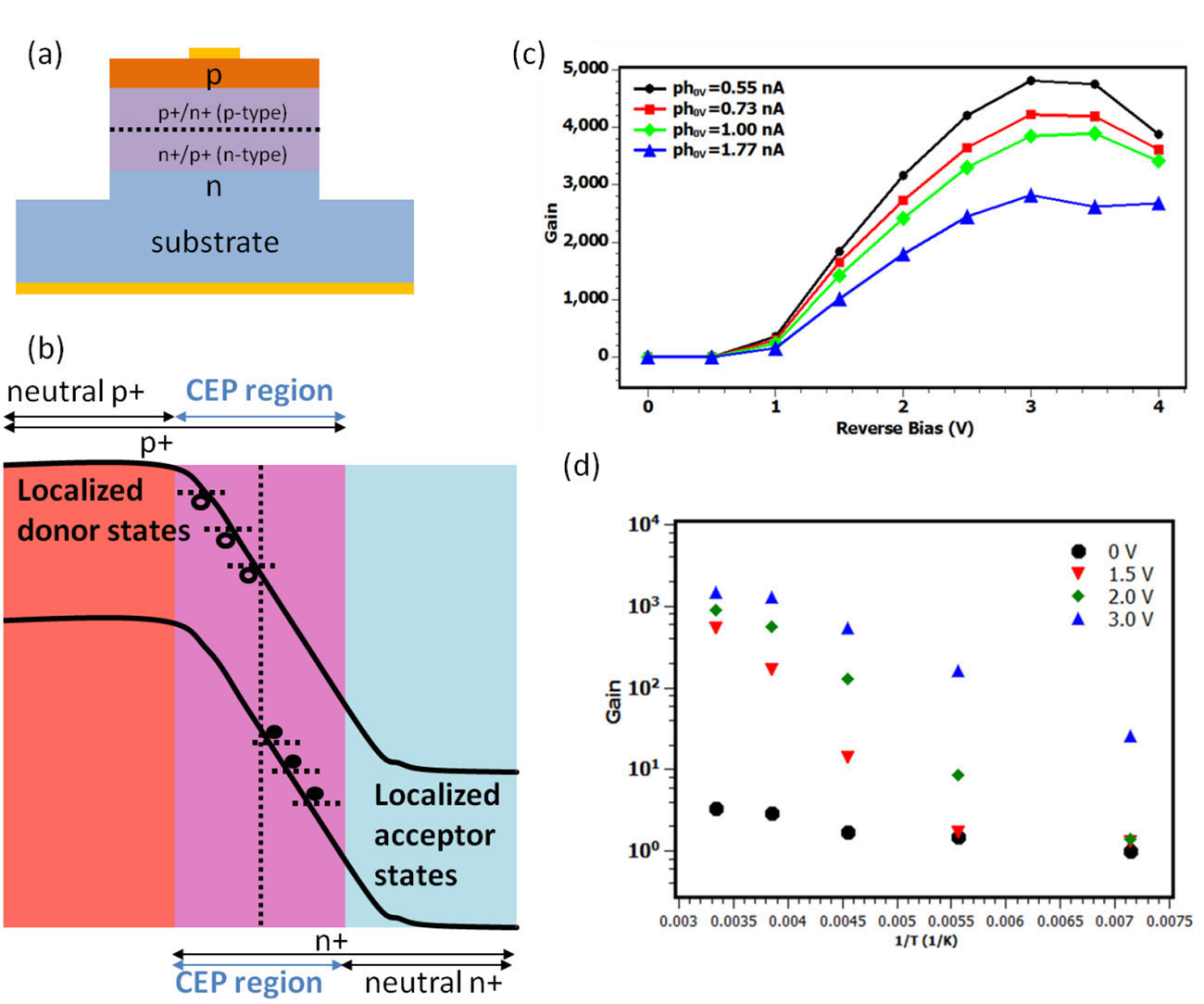 Figure 3. The design and performance characteristics of our CEP photodiode. (a) Schematic structure of the partially compensated silicon p-n junction. (b) Band diagram of the compensated p-n diode. The epitaxial layers are grown on an n-type silicon substrate by organometallic chemical vapor deposition. The core of the device is a p-n junction consisting of two partially compensated layers with a co-existing large number of donors and acceptors within the p- and n-type regions. The doping compensation ratio is near 80%. (c) Input light intensity and bias dependence of photocurrent gain. The gain characteristic was obtained from the input optical power (635nm wavelength), and the photocurrent was measured by a source meter (Keithley 2400). (d) Temperature dependence of gain. phev: Primary photocurrent. n+ and p+: Heavily doped with donors or acceptors, respectively. neutral n+ and neutral p+: Charge neutral region with high donor and acceptor concentrations, respectively.

To determine the performance of our device, we measured the photocurrent gain of the p-n compensated diode under illumination with 635nm laser light, as shown in Figure 3(c). We found that the gain increases with increasing reverse bias, which is expected, since the Auger process is enhanced by bias. With a higher primary photocurrent input, the gain saturates because the phonon dynamics regulate the whole amplification process. Thus, at a higher primary photocurrent, the injected primary carriers far exceed the available phonons, and negative feedback limits the gain. Additionally, we observed an increasing gain with increasing temperature—see Figure 3(d)5—suggesting that room-temperature operation is favored over cryogenic operation. Our observation also shows that phonon assistance plays an important role in the carrier-multiplication process.

Another feature of negative feedback is that the gain fluctuation is restricted. This result is evident in the noise characteristics, which show very small ENFs. The ENF is defined as

In summary, we have proposed a new amplification mechanism, CEP, and have demonstrated a silicon device in which this process enhances the gain and efficiency, and reduces the operation bias and excess noise (compared with an APD). In our device, carrier-phonon interactions introduce negative feedback that regulates the gain, suppresses excess noise, and favors low input-power operation and hence high sensitivity. Phonon dynamics play a key role in the multiplication mechanism, and we envision phonon engineering in disordered materials to have great potential for achieving detectors with low bias and high sensitivity. We have also observed the CEP effect in both silicon and GaAs, and believe that combining a CEP multiplication region with a germanium absorption layer could prove promising for the development of communication wavelength receivers.

Yuhwa Lo is a professor of electrical and computer engineering and the director of the National Science Foundation's National Nanotechnology Coordinated Infrastructure (NNCI) in San Diego. He is a Fellow of IEEE and OSA, and his research interests include optoelectronics, nanophotonics, biomedical devices, and microfluidics.