Superconductivity, long- and mid-wave IR detectors, and ultra-stable laser cavities that operate in the 77–150K temperature range can all benefit from vibration-free cooling.1 Currently, such low temperatures can only be achieved using cryogenic gases or liquids, solid cryogens, or mechanical refrigerators. Unfortunately, these coolers require regular attention, introduce vibrational noise, and are subject to mechanical wear over time. Many space-based applications (particularly ultra-stable laser cavities) cannot tolerate these drawbacks. All-solid-state cryocoolers are therefore desirable because of their inherent vibration-free operation and potentially long lifetime.

Optical refrigeration (i.e., anti-Stokes fluorescence cooling) is the only solid-state cooling technology capable of reaching cryogenic temperatures. Anti-Stokes cooling—in which a doped crystal is excited by a laser with a wavelength that is longer than the average wavelength of the resulting fluorescence, thus leading to cooling of the crystal—was first suggested by Peter Pringsheim almost 90 years ago.2 It was not actually observed, however, until years after the invention of lasers and the availability of high-purity host materials. The first demonstration of optical refrigeration, reported in 1995, used a fluorozirconate glass doped with ytterbium (Yb). The resulting material is known as Yb3+: ZBLANP.3Cooling occurs when low-entropy laser light (tuned to a slightly lower energy than the mean fluorescence of a material) is absorbed, thus giving rise to efficient fluorescence generation and escape. On average, each pump photon removes vibrational energy (i.e., phonons) from the cooling sample after being absorbed and re-emitted. Ideal absorption in Yb3+: YLF (i.e., Yb-doped yttrium lithium fluoride) corresponds to the E4–E5 atomic energy transition at 1020nm. Researchers have succeeded in enhancing the cooling performance over the last two decades by using a high-purity Yb3+: YLF crystalline host, which shows higher absorption than glasses.4

In our work,5 we have improved this system to attain cooling to a cryogenic (i.e., <123K) temperature of 119K for the first time. More recently, we have identified a way to achieve cooling to 77K (i.e., the temperature of liquid nitrogen) by maximizing laser absorption and reducing parasitic losses.6 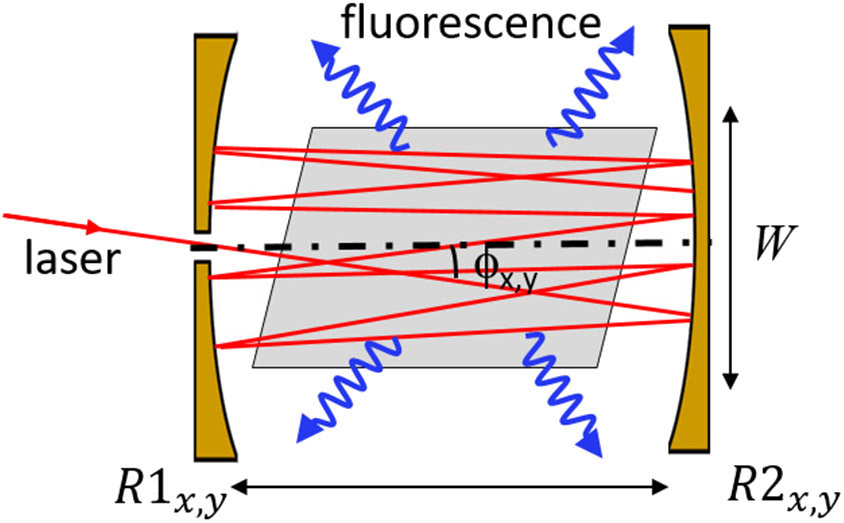 Figure 1. Schematic of our astigmatic Herriott cell. The geometry of the cell enables laser light (red) to be trapped inside of the crystal, ensuring more than 95% absorption. R1x, y=50cm, R2x=∞, and R2y=50cm, where R1 and R2 are the radii of curvature of the spherical and cylindrical mirrors, respectively. φx, y: Launching angle. W: Crystal length, width, and height (Wx=Wy=W).

We achieved solid-state cooling to double digits for the first time by improving the material purity and enhancing the absorption of the pump light in our device.7 We enhanced the purity of the material by identifying transition-metal impurities in our starting materials and securing sources of higher purity. Using this approach, we have attained a background (parasitic) absorption coefficient in Yb3+: YLF of 1×10−4cm−1, which is half the value previously achieved.6 For a typical 1cm-long crystal, enhancing laser absorption to assure a coupling efficiency larger than 95% requires more than 150 round trips for T=100K, and more than 60 round trips for T=120K. Although resonant cavity and laser intracavity geometries have been exploited before,8, 9 and have exhibited certain advantages, non-resonant multi-pass cavities (i.e., Herriott cells10, 11) offer a simpler solution that can produce very high coupling efficiencies.

The absorption path length for subsequent passes of a laser in an absorbing medium can be increased by using a non-resonant cavity for cooling. Furthermore, given the presence of a small hole in the entrance mirror (through which pump light enters the cell) and by adjusting the launch angle (φx, y in Figure 1) and mirror alignment, we can ensure that light makes more than 150 round trips through the crystal. Thus, the pump-power absorption is increased to nearly 100%. With this approach, we were able to cool the crystal to a record temperature of 87K (see Figure 2). Our results suggest that, using a laser with a higher power, liquid-nitrogen temperatures are feasible with an all-solid-state cooler. 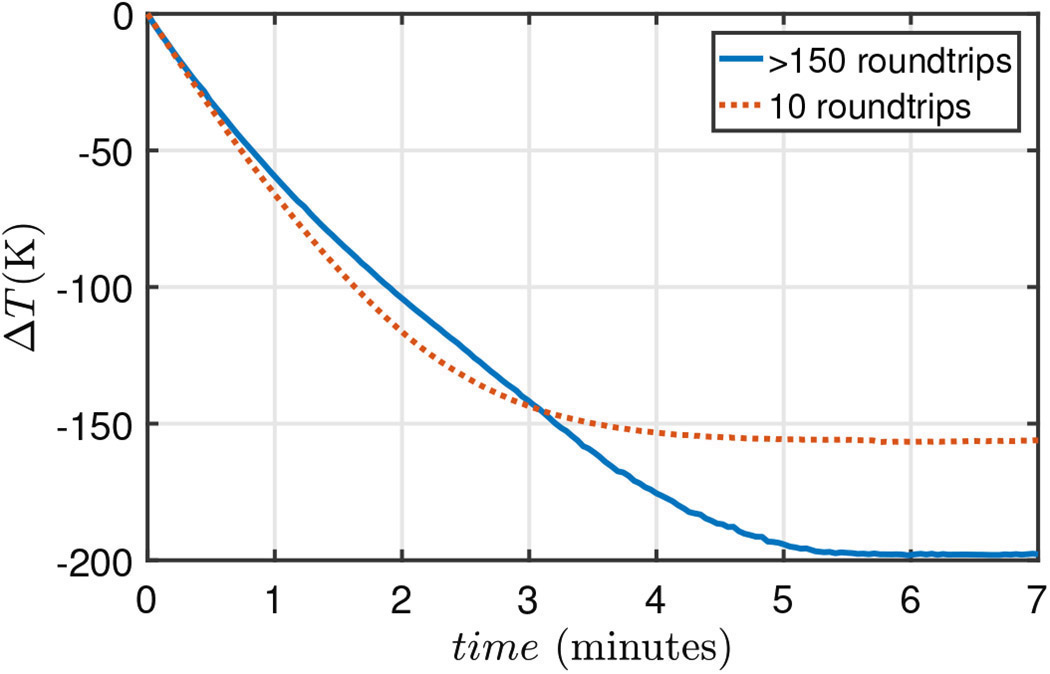 Figure 2. This plot of temperature versus elapsed time shows that laser cooling of 5% Yb3+: YLF in an astigmatic Herriott cell is significantly enhanced after 150 round trips (solid) compared with after 10 round trips (dotted) in the same time period.

In summary, we used an astigmatic Herriott cell to improve pump absorption in high-purity Yb3+: YLF. Additionally, we achieved a record-low cryogenic temperature by optical refrigeration (i.e., the only solid-state cooling technology capable of reaching such low temperatures). The ability to cool to temperatures of below 90K using this approach would enable new pathways for vibration-free cryogenic cooling, and may enable advances to be made in a variety of associated applications (e.g., long-wave IR sensors). Moreover, increased heat lift becomes viable at the higher temperatures under which larger sensors and more demanding applications require greater heat removal (i.e., between 110 and 150K). Several applications, particularly space-based IR sensors, stand to benefit from the vibration-free cryogenic operation made possible using our approach. We are currently making further improvements to the cooling efficiency of our device by testing new active rare-earth ions in purified crystalline hosts, and by developing new laser sources. By combining these approaches with further improvements to material purity—which we are currently working toward in collaboration with Los Alamos National Laboratory—we hope to achieve temperatures approaching 77K (i.e., liquid-nitrogen temperatures). Furthermore, these efforts will help to advance ongoing research in the related field of radiation-balanced (or ‘athermal’) lasers.