An emerging lithographic technique offers a promising alternative to electron beam lithography for fabricating new semiconductor devices with both traditional and non-traditional resists.
15 May 2017
Stuart Boden and Xiaoqing Shi

In semiconductor device fabrication, lithography is the process of creating features in a specialized layer of material (called a ‘resist’) through chemical modification. These features are subsequently transferred from the resist to another functional layer, and this combination of lithography and pattern transfer is carried out multiple times to form the semiconductor device or circuit. The field of nanoelectronics is currently moving into the sub-10nm realm, hence the drive for ever smaller semiconductor devices requires lithographic techniques capable of accurately creating features on this scale. Traditional lithographic techniques are pushed to their limit at these scales, therefore, new methods are being sought to enable smaller and more-precise pattern definition.

The established lithographic technique for prototyping new semiconductor devices is electron beam lithography (EBL), in which a beam of electrons is accelerated to tens of kilovolts and focused to a small spot to induce localized chemical modification in the resist, tracing out the required pattern. Then either the modified or non-modified areas of the resist are washed away during the development process leaving the pattern defined in the resist. The resolution (i.e., the minimum size of features we can define) of EBL is limited because electrons tend to scatter (rather than remaining accurately parallel) as they travel through the resist, unintentionally exposing areas of the resist and substrate away from the incident beam landing point, known as the proximity effect (see Figure 1). On the other hand, ions are heavier than electrons and so their trajectories are less affected by scattering, which raises the question of whether ions can be used instead of electrons to push beyond the capabilities of EBL. 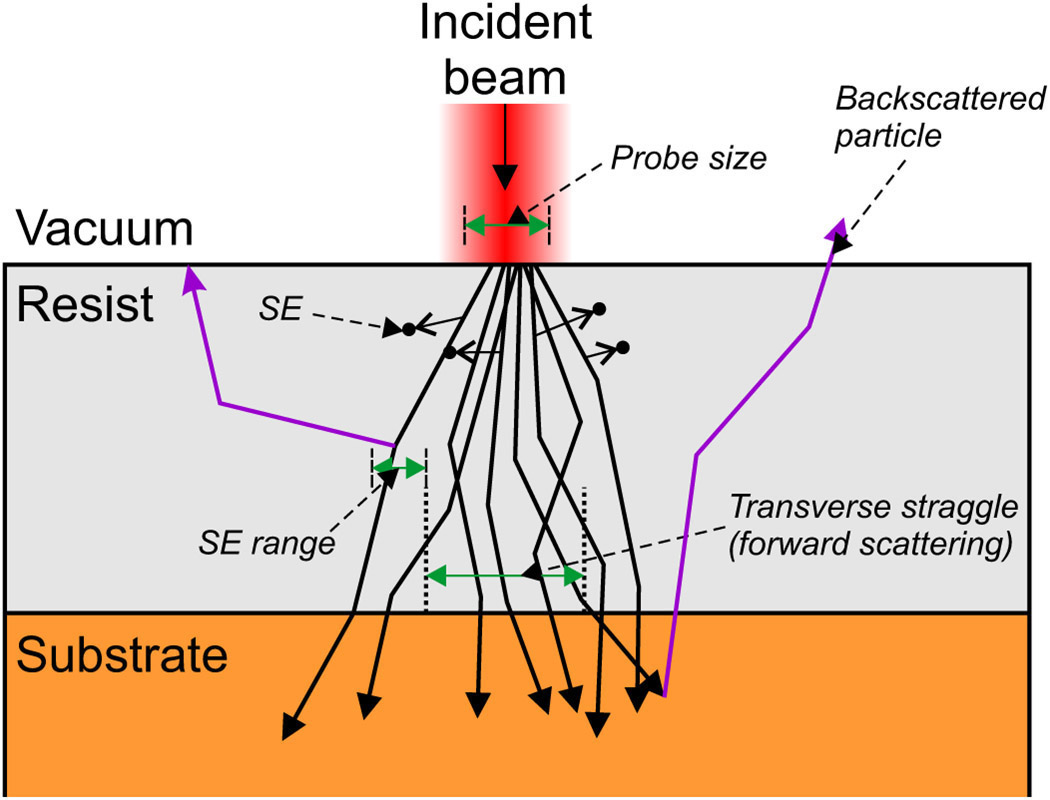 Figure 1. A schematic representation of the interactions of an electron beam with a resist layer on a substrate.1The scattering of electrons causes unintentional exposure of resist and substrate areas away from the incident beam (the proximity effect), limiting the resolution of the lithographic technique. SE: Secondary electron.

Lithography with focused beams of heavy ions (such as gallium) is known, but is limited by the size of the spot to which the beam can be focused.2, 3 Moreover, these beams can cause resist and substrate damage and ion contamination. Recently, helium ion microscopes have been developed (based on advances in gas field ion source technology),4 which can produce helium ion beams able to be focused to a sub-nm spot and traced in a definable pattern across a surface. This development has led to the emergence of helium ion beam lithography (HIBL), a technique that offers a spot size smaller than that of EBL, the low proximity effect of ion beam lithography, and less damage and contamination near the surface than heavy ion beams. Here, we present our recent results in the field of HIBL method development with both traditional and non-traditional resist materials.

The first HIBL investigations used very thin layers of well-known high-resolution resists from EBL, such as poly(methyl methacrylate) (PMMA) and hydrogen silsesquioxane (HSQ). PMMA is primarily a positive resist, meaning that the exposed material is washed away leaving the pattern formed in the unexposed material. However, PMMA can be switched to a negative resist through exposure to very high doses of electrons or ions, and hence the exposed material remains after development whilst the unexposed material is washed away. HSQ is a negative resist and does not switch to positive at high doses. Studies have shown that these resists are more sensitive to HIBL than EBL, which means that lower ion doses are needed.5, 6 For example, we found that the dose required for positive resist PMMA is approximately 60-fold less in HIBL than EBL (see Figure 2).5,7 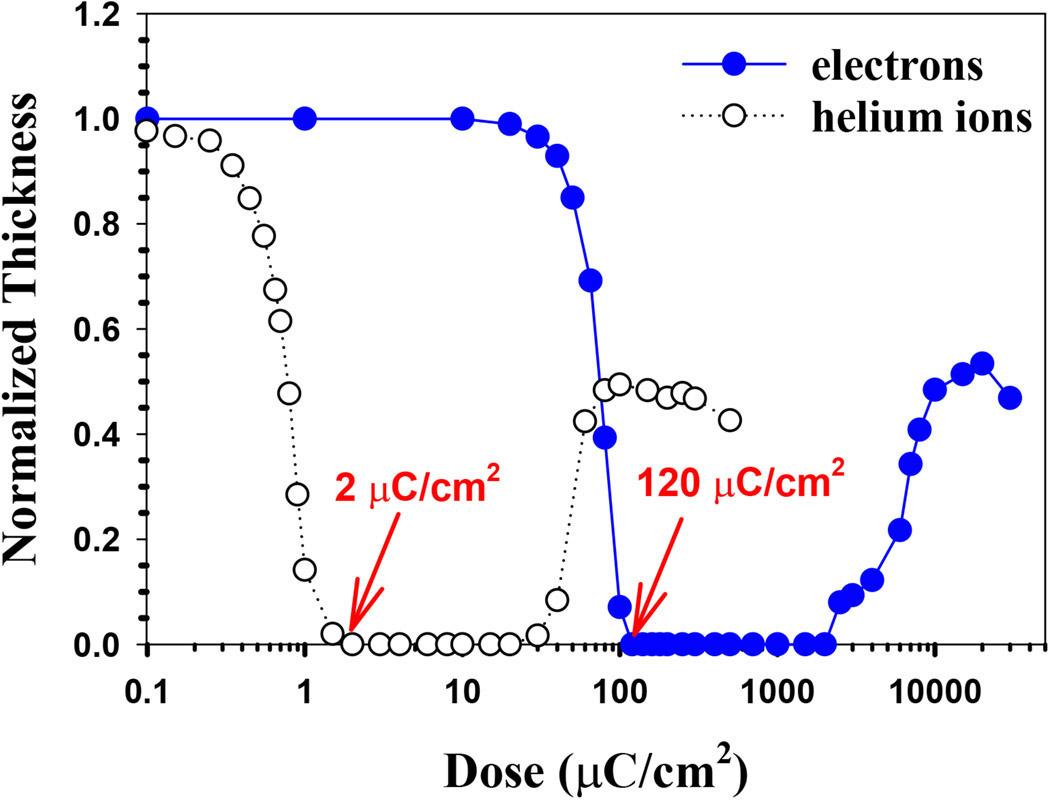 Figure 2. A comparison of the dose-response curves for 20nm-thick poly(methyl methacrylate) in electron beam lithography and helium ion beam lithography (HIBL). The measured sensitivities of 120μC/cm2and 2μC/cm2reveal a 60-fold improvement with HIBL.

High-resolution HIBL patterning on thin layers of PMMA and HSQ resists has been investigated by various researchers. The smallest feature sizes achieved to date use HSQ and are well within the sub-10nm region.1, 6,8 For example, 5nm half-pitch lines in 12nm thick HSQ films have been fabricated.8 Indeed, the low proximity effect of HIBL means that feature size is independent of pitch—the repeat distance in the pattern of lines—at a fixed ion dose, even at very high pattern densities (e.g., 6nm diameter dots with 14nm pitch in 5nm thick HSQ6). Several techniques have been employed to quantify the low proximity effect of HIBL.1, 5 For example, we used arrays of ring patterns defined in PMMA that indicated a proximity effect in HIBL two orders of magnitude lower than in EBL.5, 9

A number of other avenues are being explored in this research area, such as using HIBL for pre-screening extreme UV resists10 and creating templates for nanoimprinting.8 The latter may offer a route to avoiding damage resulting from helium implanted in the device material. These ideas are also being extended to other light ion species (e.g., neon) as gas field ion source technology continues to develop.11

In a departure from traditional EBL resists, we have investigated HIBL with new negative resists based on fullerene (a molecular form of carbon). These resists benefit from a small molecular size (which leads to high-resolution patterning) and high etch resistance (which facilitates pattern transfer processes). We found that these resists are up to 500 times more sensitive to helium ions than electrons, hence requiring very low ion doses during HIBL. Our most promising results to date are dense arrays of well-defined lines with widths of 8.5nm and a pitch of 17nm (see Figure 3).12 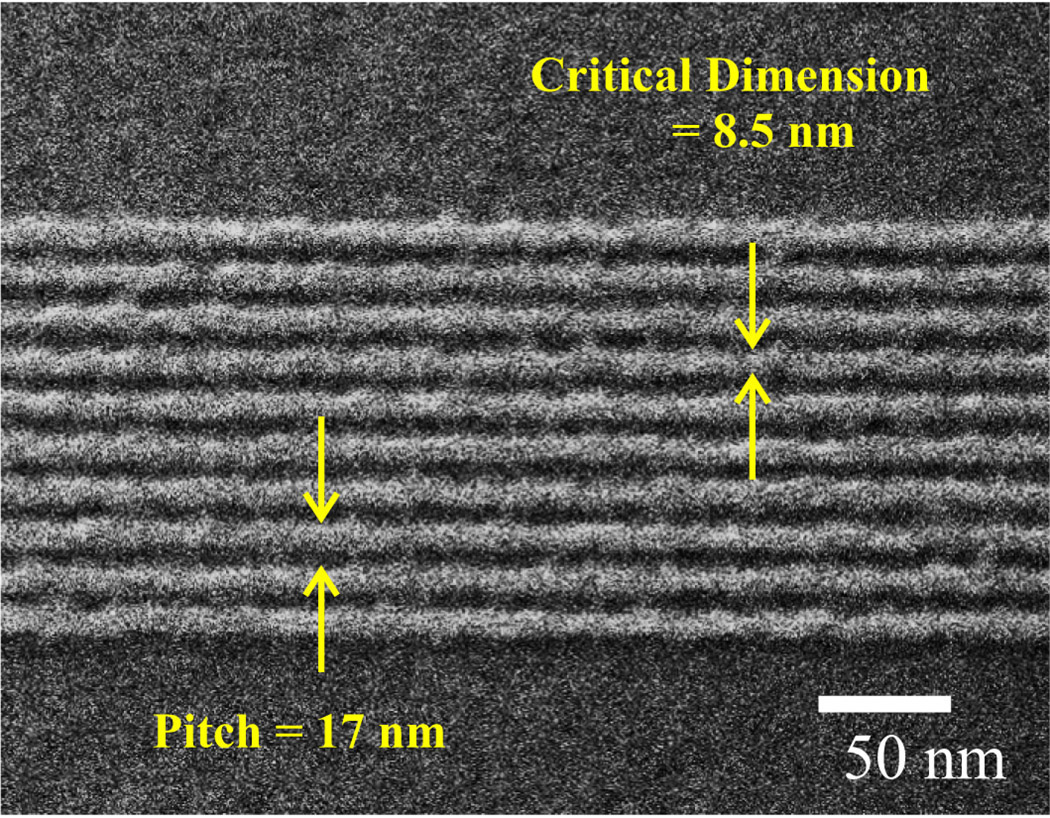 Figure 3. A helium ion microscope image of well-defined lines created by HIBL with a line dose of 0.09nC/cm in a 10nm-thick fullerene-derived negative resist. (Reprinted with permission.12)

In summary, we have shown that HIBL is a promising new technique for sub-10nm patterning in both traditional and non-traditional resists, which could find applications in next-generation semiconductor device prototyping. This technique has several advantages over EBL, including a low proximity effect (i.e., what you write is what you get), high resolution, and high sensitivity (i.e., low ion doses are required). Our next steps toward semiconductor device fabrication will be to demonstrate successful pattern transfer from the resists into the underlying substrates.

Stuart Boden is a lecturer at the University of Southampton. His research interests include nanofabrication with focused ion beams and efficiency enhancements in silicon photovoltaics.

Xiaoqing Shi is currently pursuing her PhD at the University of Southampton. She is investigating the lithographic applications of a focused helium ion beam on both conventional long-chain polymeric and new molecular resists.