A number of activities conducted by a support team, including robust calibration and monitoring programs, are used to maintain the observatory's aging instruments and detectors.

NASA's Hubble Space Telescope was launched in 1990 and has since transformed the field of astronomy research. Indeed, observations from the telescope are used to tackle a broad range of astronomical questions (spanning the solar system through to the edges of the known universe) and more than one-fifth of all refereed astronomy papers now either include Hubble data or are influenced by Hubble-derived science.1 Since its launch, the telescope has also been refreshed by five servicing missions, i.e., during which astronauts delivered new instruments and repaired existing ones (and upgraded other parts of the observatory). Although the currently operating science instruments on Hubble still offer capabilities that are unmatched (and will continue to do so in the near future), it has been seven years since the last servicing mission, during which time the instruments have been sitting in the harsh space environment.

In this work, we provide an overview of the issues that affect the Hubble instruments (the issues tend to vary depending on the detector types and the lifetime of the instrument in space). We also describe some of the work carried out by the observatory support staff so that high-quality science data products can continue to be obtained from the telescope. A list of the currently operating science instruments on Hubble is given in Table 1.

One of the issues that affects the Hubble instruments is the dark current of the detectors (i.e., the detector background rather than signal from externally produced photons). We find that the dark current can depend on the detector temperature, and in some cases—i.e., for the Cosmic Origins Spectrograph (COS) near-UV (NUV) channel and the Space Telescope Imaging Spectrograph (STIS)—it has shown a modest increase over time. Overall, however, the dark current rate is still low (about10−4–10−5 counts/s/pixel), and we monitor it regularly so that we can update documentation and observation planning tools.

In addition, a charge-transfer efficiency (CTE) problem affects all of Hubble's CCD detectors, and thus channels on the STIS, Advanced Camera for Surveys (ACS), and the Wide Field Camera 3 (WFC3).2 The issue arises when energetic particles hit these detectors, causing the displacement of silicon atoms and the creation of vacancies in the silicon lattice. Electrons can be temporarily trapped in these spaces, which causes some of a pixel's charge to be delayed when the detector is read out. Flux can thus be assigned to different pixels and leads to the appearance of ‘trails’ in uncorrected images. We have recently extended an empirical approach to correct this effect for ACS3 to the CCD detectors on STIS and WFC3. In this approach, we use calibration programs for each CCD to track the CTE and its temporal evolution. We can thus update the algorithms and the reference files needed to make the corrections of the effect. Images from WFC3 before and after the correction are shown in Figure 1. 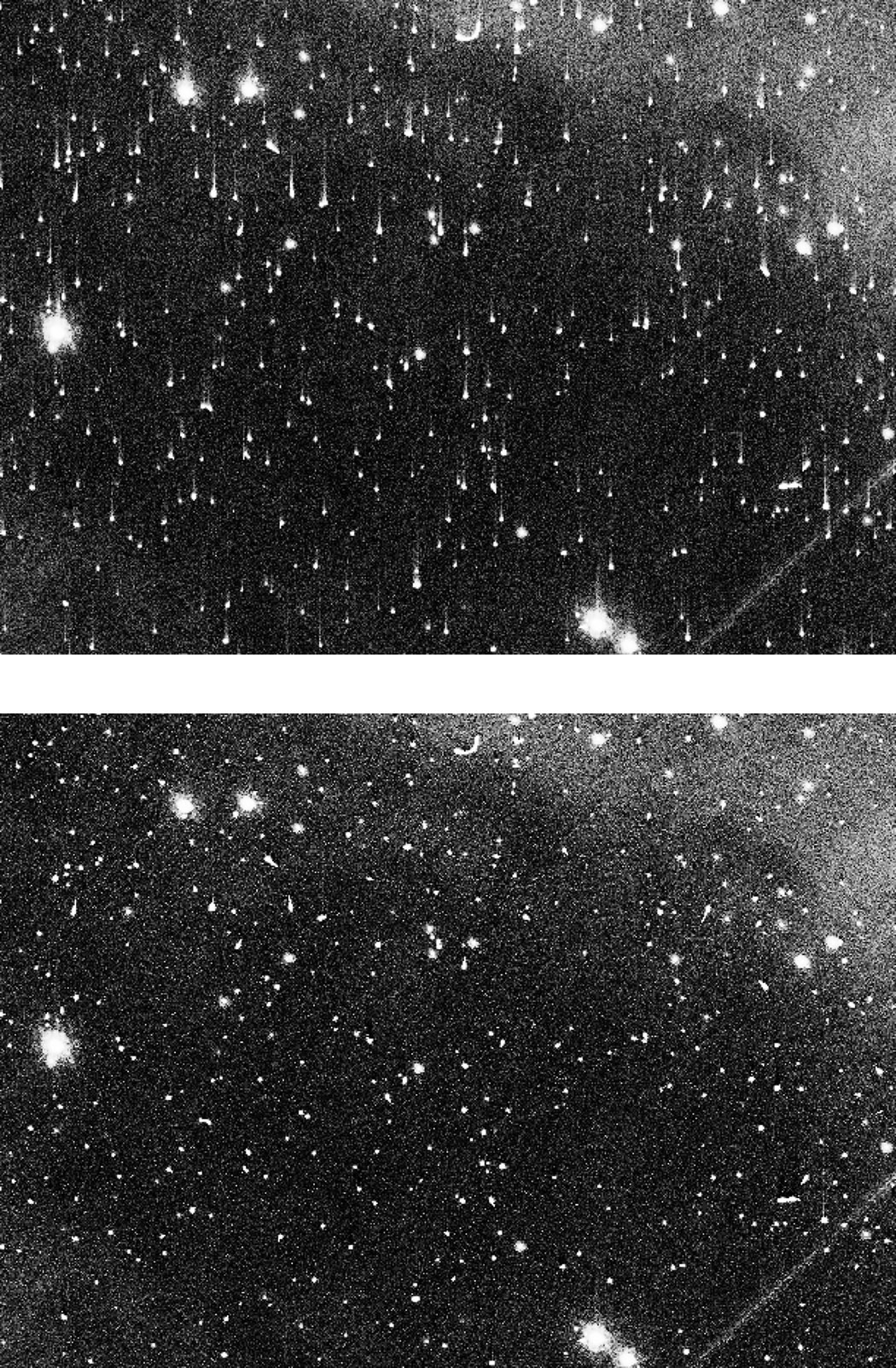 Figure 1. Images of a star-forming region (known as Westerlund-2), obtained with Hubble's Wide Field Camera 3 before (top) and after (bottom) the correction for charge-transfer efficiency (CTE) has been made. In the top image, star trails are obvious (indicating that some of the charge from pixels associated with bright stars is delayed during detector read-out), but in the bottom image these trails have been corrected. (Images provided courtesy of E. Sabbi.)

We use calibration lamps on ACS and STIS to illuminate the detectors for the purpose of wavelength and flat-field calibration. After many years of on-orbit usage, however, the brightness of these lamps is fading. To deal with this issue currently, changes only to the shortest wavelengths of the echelle spectroscopy mode of the STIS far-UV (FUV) channel are required, by using a back-up lamp. In the future, however, we will need to perform wavelength calibration for the other spectral modes of the STIS so that the standard exposure times of the lamps provide sufficient counts. The lamps that are used for internal flat-field calibration on STIS and ACS have so far decreased to (at worst) 65% of their initial brightness,4 but no additional mitigation is required at present.

Only a limited region of the cross-delay line detector on the COS can be used for science exposures (see Figure 2), and prior to installation of this instrument on Hubble, a total of five lifetime spectral positions were identified. We have also found that this detector experiences gain sag caused by exposure to photons,5 which means that it is necessary to regularly relocate the positions of the science spectra and the associated lamp spectra. Each time we conduct one of these lifetime position shifts, we also have to determine the precise location of the next position and the associated best-focus values, verify the performance at the new location, and update the calibration reference files and flight software.6, 7 We anticipate that continued operations of the COS FUV detector beyond 2019 will be feasible (especially given the astronomy community's interest in its unique sensitive UV spectroscopy capability). In fact, discussions between the instrument scientists and the astronomy community are currently under way to determine the best strategy for extending the useful lifetime of COS. 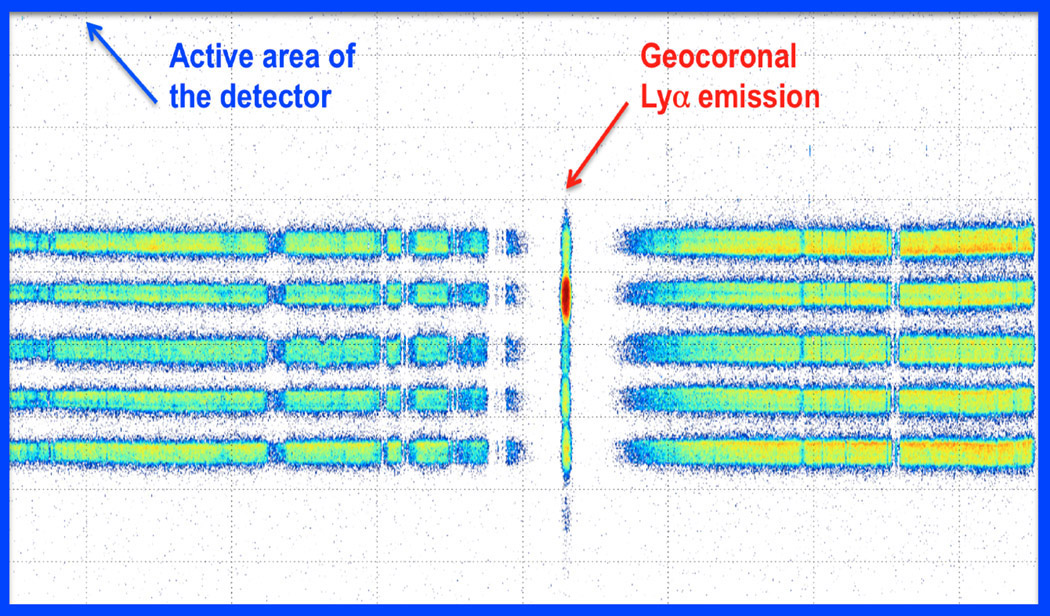 Figure 2. Illustration of the detector area of the FUV XDL detector on COS. Only a limited region of the detector is used for science exposures. A total of five such lifetime positions were defined before the instrument's launch (as shown by the horizontal bands). Continued use of the COS FUV detector into the 2020s is feasible, but will require changes to the current operating procedures. Lyα: Lyman alpha. (Provided courtesy of C. Oliveira.)

There are other observatory concerns to deal with, and the focus of our ongoing operations is to maximize Hubble science over a five-year horizon, without jeopardizing longer-term operations and future scientific productivity. For instance, we use rate gyro assemblies to control the observatory pointing during slews for initial target acquisitions and reacquisitions after Earth occultations, and these ‘gyros’ have long been considered one of the more fragile components of the observatory. In the current nominal configuration, we use three gyros, which allows us to achieve a high observing efficiency, large instantaneous field of regard, and a range of observing modes. We will continue to use three gyros until only two are left, at which point we will operate with only a single gyro (with only a minor reduction to the breadth of science programs capable of being performed). The last issue that we monitor is the atmospheric drag that Hubble incurs because of its low-Earth orbit. This drag causes the observatory's orbital altitude to decrease with time. In 2015 we used the Goddard Space Flight Center's Flight Dynamics Facility to estimate that the telescope's reentry would not occur before 2028 (most likely it will occur in 2036, but the date depends on solar activity). The orbital drag effect will therefore not influence science operations in the near term.

In summary, through a variety of activities in which we are mindful of the effects of a gracefully aging observatory, our team of support staff continue to maintain Hubble's scientific productivity. We plan to keep using robust calibration and monitoring programs to track and mitigate issues with the observatory. In this way, we can ensure that the telescope will continue to be used to explore the frontiers of astrophysics and to inspire the public and new generations of scientists.

Rachel Osten is an astronomer and the Deputy Mission Head of the Hubble Space Telescope Mission Office at STScI. Her research interests include multiwavelength studies of the dynamic outer atmospheres of Sun-like stars.