Perovskite solar cells (PSCs) have attracted a great deal of attention in recent years as the devices can be prepared by solution processing,1, 2 opening up the potential for inexpensive fabrication of solar cells on substrates with large surface areas. Vapor deposition of these materials is also possible,3 but solution processing remains the more popular fabrication method as it is simpler and does not require expensive equipment. Since the first reports of PSCs in 2012, the efficiency of these devices has more than doubled (from ∼9.7% to 22.1%).1 Thus, the efficiency of PSCs is comparable with and in some cases even exceeds that of more mature solar cell technologies. Nevertheless, several challenges need to be addressed, with long-term stability under realistic operating conditions currently the greatest challenge.1, 4,5

A number of possible architectures are possible for PSCs. The devices commonly consist of two charge transport layers (electrodes) separated by a light-harvesting layer: an organic or n-type metal oxide electron transport layer (ETL), either as a compact film or compact/mesoporous layer; a perovskite layer; and a hole transport layer (typically organic, but metal oxides such as nickel(II) oxide are also used). Using metal oxides for the charge transport layers is potentially advantageous as these materials are typically less sensitive to oxygen and humidity than their organic counterparts. However, some metal oxides require high deposition temperatures, in particular for the deposition of mesoporous layers. Accordingly, planar PSCs with compact film metal oxide ETLs (see Figure 1) are of interest. Here, we present the results of our investigation into improving the stability and efficiency of compact film zinc oxide (ZnO) ETLs in PSCs.

Our PSCs include an inexpensive and easily manufactured perovskite material, methylammonium lead triiodide (CH3NH3PbI3). For the ETL, we use ZnO rather than the more commonly used titanium dioxide (TiO2) as ZnO has higher conductivity and the ETL can be readily prepared at lower temperatures. However, the stability of perovskite films on ZnO is significantly lower than on TiO21, 5–7 and as such the deposition temperature for the perovskite layer on ZnO needs to be limited to avoid thermal decomposition.5 The decomposition process is a result of the properties of the ZnO surface: its alkaline nature causes deprotonation of methylammonium ions and hence degradation of the CH3NH3PbI3 perovskite. Furthermore, the decomposition is accelerated by the presence of hydroxyl and carboxyl groups on the ZnO surface.7 Although the stability problem could be mitigated by including an interfacial barrier layer such as aluminum oxide,8 we are interested in exploring whether simpler surface modifications could be used to alter the properties of ZnO and improve the stability of ZnO-based PSCs.9

A further issue with ZnO-based PSCs is the lower efficiency of these devices compared with TiO2-based PSCs. The lower deposition temperature combined with the different wetting properties of ZnO surfaces compared with TiO2 surfaces typically results in perovskite films with smaller grain sizes (see Figure 2) and, therefore, lower power conversion efficiency in ZnO-based devices (see Figure 3). Consequently, our research also aims to improve the efficiency of these devices.

Figure 2. Scanning electron microscopy images of perovskite films on (a) ZnO and (b) titanium dioxide (TiO2). 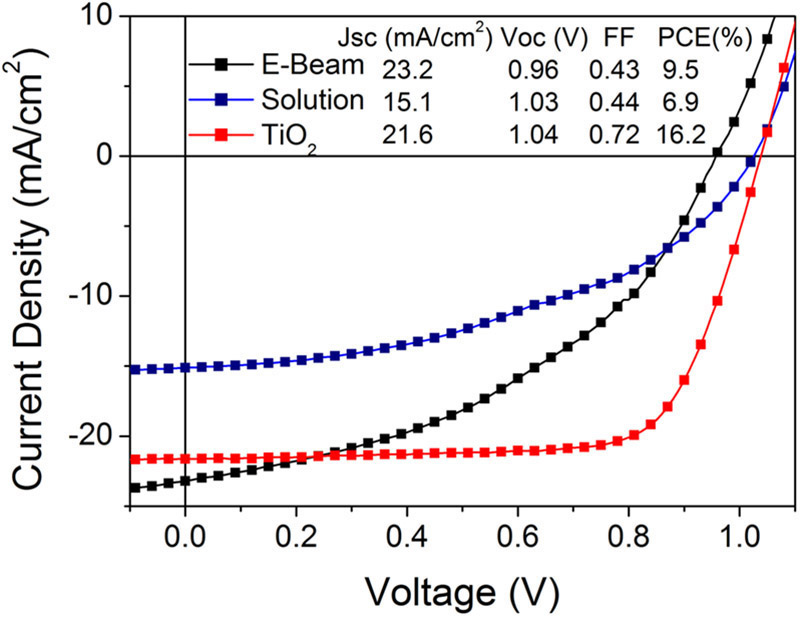 We observe significant differences in performance between ZnO ETLs deposited by vapor deposition (i.e., e-beam evaporation) and solution processing (see Figure 3). This disparity is a result of the presence of functional groups from ZnO precursors and abundant hydroxyl groups on the surface of the solution-prepared films. Thus, we attempted to remove any organic contamination from the surface and hence alter the surface properties of the solution-processed ZnO through UV ozone or oxygen plasma treatment. Oxygen plasma treatment of the ZnO surfaces resulted in very poor wetting properties of lead(II) iodide solutions in dimethylformamide9 and consequently low-quality perovskite films.2, 4 Thus, we used UV ozone treatment to remove any surface organic contaminants. Although worsening of the film quality was less severe than with oxygen plasma, we found that this treatment similarly did not have a favorable effect on the performance of the solution-deposited ZnO (see Figure 4). 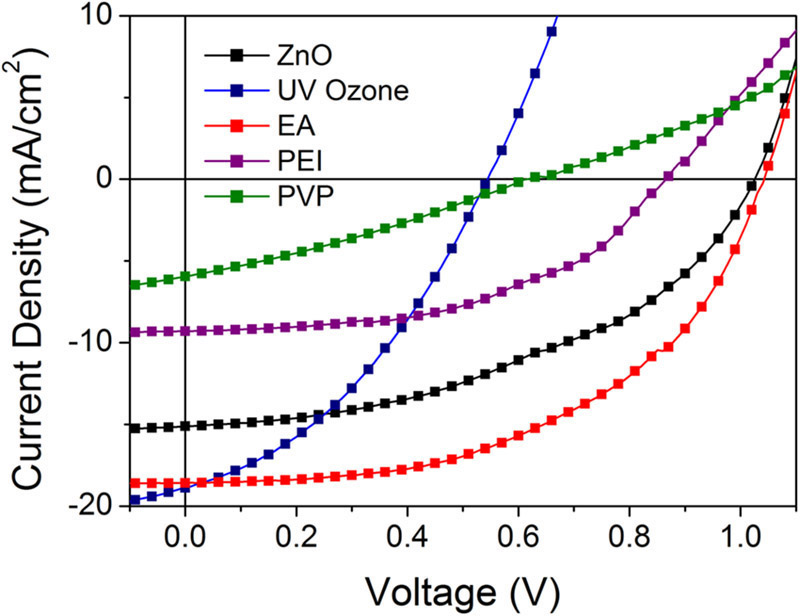 In addition, we tested a range of surface modification agents, including ethanolamine (EA), polyethyleneimine (PEI), and polyvinylpyridine (PVP).9 Figure 4 shows that PSC performance is significantly affected by the surface treatment of the ZnO ETL. In the case of UV ozone, the inferior photovoltaic performance was accompanied by significant decreases in the fill factor and open-circuit voltage, and hence is likely a result of the low-quality perovskite layer. Surface modification with PEI or PVP was also detrimental to the photovoltaic performance, which in the case of PVP probably results from an increase in series resistance of the device. Of the surface treatments discussed here, only EA resulted in an improvement of the PSC performance, with increases in short-circuit current density and fill factor compared with unmodified ZnO.

Despite the observed performance improvements through altering the surface of the ZnO ETL, the resulting devices are still inferior compared with those on TiO2. In particular, although planar cells with TiO2 ETLs are stable during accelerated aging and outdoors in a hot and humid climate,5 this is not the case for cells with ZnO ETLs. While post-deposition treatments and/or surface modifications produce significant changes in the cell performance, further improvements are still needed. Efficient, long-lasting devices with ZnO ETLs will likely require perovskite materials that are more stable than CH3NH3PbI3.

In summary, we have investigated the use of ZnO as an ETL in PSCs. The ZnO deposition method and any post-deposition treatment significantly affects the ZnO surface properties, ZnO/perovskite interface, perovskite film quality, and—consequently—the performance of these PSCs. Our future research in this area will include continuing to investigate surface treatments to improve the performance of ZnO-based PSCs. We will also explore possible alternatives that include doping1 and different oxides suitable for low temperature processing, such as SnO2.10

Aleksandra Djurišić is a professor in the Department of Physics at HKU. Her research interests include metal oxide materials, light-emitting devices, solar cells, energy storage, catalysis, and photocatalysis.

Fangzhou Liu obtained her PhD from HKU in 2016. She is currently working in Aleksandra Djurišić's laboratory.