Terahertz (THz) imaging is emerging as a robust platform for a myriad of applications in the fields of security, health, astronomy, and materials science. Because of its non-ionizing nature, the THz regime (with wavelengths spanning from microns to millimeters) is a potentially safe and noninvasive medical imaging modality for cancer detection. The presence of cancerous tissue—one of the leading causes of death worldwide—generally leads to an increased blood supply and a local increment of water content. THz imaging provides an endogenous contrast between a normal region and cancerous tissue because of its sensitivity to water content. Furthermore, the structural changes of abnormal tissue enhance the intrinsic THz imaging contrast, thereby suppressing the need for a conventional contrast agent.

Recent ex vivo studies have affirmed that THz frequencies that are suitable for the detection of skin, oral, breast, liver, gastric, and colorectal cancer1–4 can be generated by using free-space benchtop systems. Unfortunately, assessing THz reflectivity data without excising the tissue is challenging with these systems. In contrast, THz endoscopic imaging systems—which can be realized by using either optical fibers or THz waveguides—provide high flexibility for examining the interior surfaces of organs and body cavities. In the case of optical-fiber-based imaging systems, the photoconductive antenna that is connected to the distal end of the fiber operates at a very high voltage, making it undesirable for in vivo applications. Additionally, the high absorption of THz radiation by tissue necessitates reflection-modality imaging.

We have developed a medical-prototype endoscopic imaging system based on THz waveguides that can assess the THz reflectivity data from organs that are inaccessible using other approaches: see Figure 1. We also performed a feasibility study to determine whether our system can enhance conventional cancer screening methods. To this end, we performed our experimental measurements in three steps. First, we fabricated and characterized the low-loss flexible THz waveguides that are essential for endoscopic applications. We then established the contrast between normal and cancerous regions of ex vivo colonic tissue by using THz polarization-sensitive imaging. Finally, we demonstrated the practical implementation of our THz-waveguide-based endoscopic system for cancer imaging. 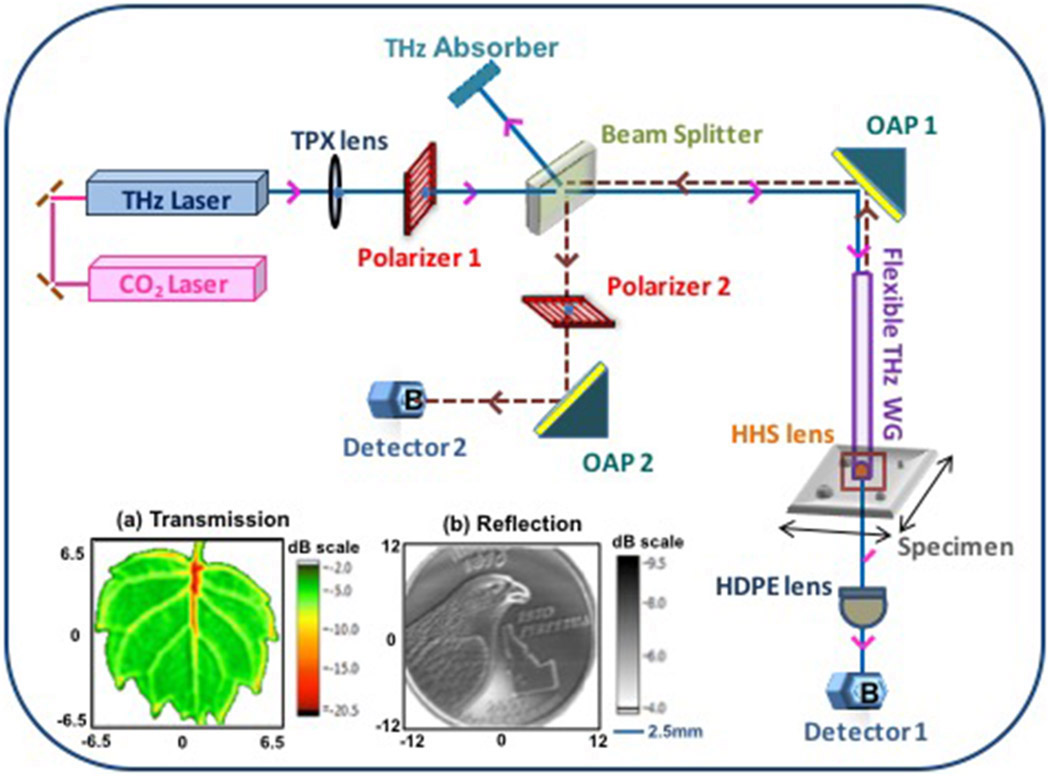 We used a liquid-phase chemical deposition process to fabricate flexible polycarbonate THz waveguides with silver, gold, and silver/polystyrene coatings. Subsequently, we examined the metal- and metal/dielectric-coated waveguides to determine the transmission of THz radiation at multiple frequencies. From these measurements, we found that propagation losses as small as 1.7 and 0.96dB/m are achievable with silver- and silver/polystyrene-coated waveguides, respectively.6 Our investigation demonstrates the feasibility of using one-micron-thick silver-coated waveguides at multiple THz frequencies to obtain low-loss single mode outputs,5 as shown in Figure 2. 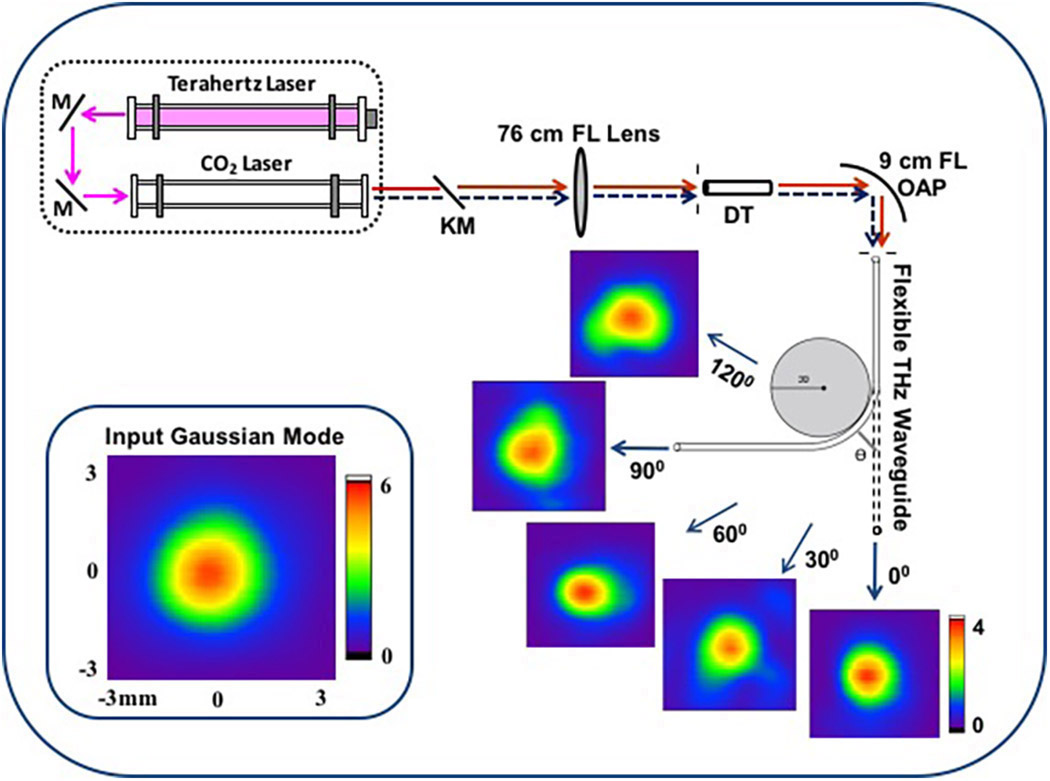 To investigate the suitability of continuous-wave THz imaging for detecting colorectal cancer, we acquired the reflectance from normal and cancerous regions and compared them. For this, we used a carbon dioxide (CO2) optically pumped far-IR gas laser (operating at 584GHz). We used a polarization-specific detection technique to obtain both co- and cross-polarized THz images of fresh and formalin-fixed colonic tissues and found that the reflection measurements exhibited an intrinsic contrast between normal and cancerous regions.1 Consequently, the cross- and co-polarized THz images exhibited increased reflection from the tumor. Our data analysis indicates that the cross-polarized THz images not only correlate better with the histology compared to the co-polarized ones, but also provide a constant relative-reflectance ratio (of normal versus cancerous tissue) that is independent of the patient.

Finally, we built a prototype THz endoscopic system by integrating a thin metal-coated flexible THz waveguide with an imaging system. The THz source and detector are located remotely, such that neither is required to be inserted into the patient. As is illustrated in Figure 1, our imaging system uses a single channel to transmit and collect the back-reflected intrinsic THz signal from the sample, and is capable of operation in both transmission and reflection modalities.2 The THz images—see Figure 3—show that this approach has promise for applications in communication, sensing, and biomedical imaging. Additionally, the diameter of the THz waveguide is the only determining factor for the THz endoscope size. Because we are able to fabricate very small THz waveguides (with diameters ranging from a millimeter to hundreds of microns), THz endoscopes can be scaled down significantly according to practical requirements.6 The 2D images that we obtained using our prototype system show intrinsically higher THz reflectance from the tumor and adequately delineated abnormal regions—see Figure 4—thereby demonstrating the potential of THz imaging for cancer detection.7 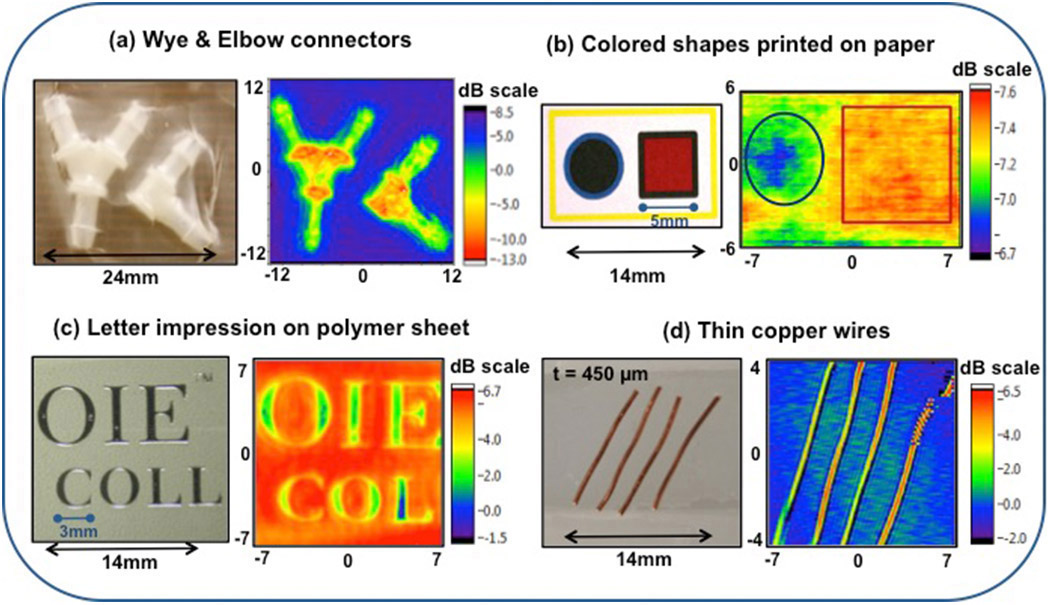 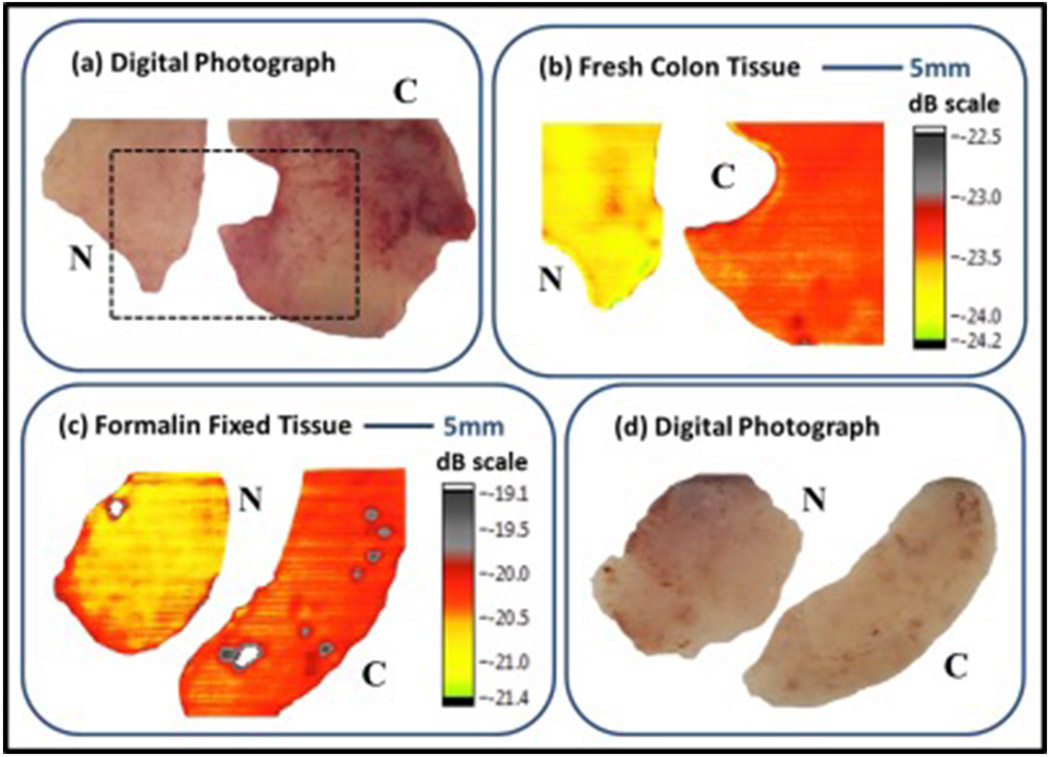 In summary, we have investigated the potential medical application of continuous-wave THz radiation for cancer detection and the feasibility of using a THz endoscope as an additional tool to aid in colorectal cancer screening. This proof-of-principle experiment demonstrates the possibility of obtaining an intrinsic endogenous contrast between normal and cancerous regions. The level of contrast that we attained represents a significant step toward the clinical endoscopic application of THz technology for real-time cancer screening. As a next step, we intend to test our prototype THz endoscopic system for in vivo measurements.

Pallavi Doradla received her PhD in physics from the University of Massachusetts Lowell and is now a postdoctoral researcher. Her research focuses on the fields of THz imaging and biomedical optics and her expertise lies in endoscopic imaging, catheter design, polarization-sensitive optical coherence tomography, flexible THz waveguide technology, and cancer detection.