High-resolution ex vivo imaging of the brain is achieved with a novel technique that will enable studies of normal brain structure and the effects of neurological disorders.
27 January 2017
David A. Boas, Hui Wang, Caroline Magnain and Bruce Fischl

The human brain is composed of approximately 100 billion neurons that ‘communicate’ through an intricate network of axons and dendrites.1 The difficulty of tracing these 3D neuronal pathways, however, has been a critical barrier for standard histology (the study of microscopic anatomy) over the past 100 years. Indeed, there is still no technology that can be used to acquire microscopic images in undistorted 3D space for mapping human brain connectivity.

Currently available techniques for 3D brain mapping include histological staining and polarized light imaging.2, 3 In these approaches, 2D image slices are obtained, but these must be physically cut and hence distorted, which makes 3D reconstruction extremely labor intensive and prone to irreducible errors.4 Over the past two decades, diffusion magnetic resonance imaging (dMRI) has been used to improve the understanding of regional connectivity and its functional importance in the living human brain.5, 6 The millimeter-scale resolution of dMRI, however, means that it is challenging to obtain images when fibers from multiple directions come together in relatively compact regions (e.g., the confluence of different bundles, or fan-in regions of the internal capsule or the cerebellar peduncles).7

In our work,8 we have therefore been developing a new method—known as automatic serial-sectioning polarization-sensitive optical coherence tomography (as-PSOCT)—with which it is possible to resolve human neuronal fiber projections and orientations, with 3.5μm in-plane resolution and better than 50μm through-plane resolution. In our approach we conduct the imaging in a tissue block-face before cutting induces any distortions. In this way, we can maintain volumetric microscopic registration and enable neuronal fiber tracing over long distances. A schematic illustration of the envisioned imaging system for mapping the whole human brain connectome is shown in Figure 1.

Figure 1. Schematic illustration of the envisioned setup for brain imaging with the automatic serial-sectioning polarization-sensitive optical coherence tomography (as-PSOCT) technique. Translation stages (with up to 500mm motion) will be used for movement in the X, Y, and Z directions. Linear bearings (guided by posts at the end of the Y-axis) near the microtome will maintain smooth translation along the Z-axis, despite the cantilevered design. In practice, the brain can actually be cut along the coronal, axial, or sagittal planes (as dictated by the requirements of a given study).

At present, we have configured our system to image a volume on the order of 10cm3 rather than the whole human brain (about 1200cm3). We can thus demonstrate our technology as a proof-of-principle (i.e., a prelude to scientific investigations of the human brain's structure) and, to date, we have acquired volumetric images that span up to 1cm3. We have also validated our images against standard Nissl and Gallyas histological staining (see Figure 2). Our PSOCT images have good contrast, which arises from the alignment and density of cell populations and myelinated fibers. In addition, with as-PSOCT, it is possible to resolve the confluence of fiber bundles in brain regions that cannot be distinguished with dMRI (see Figure 3). 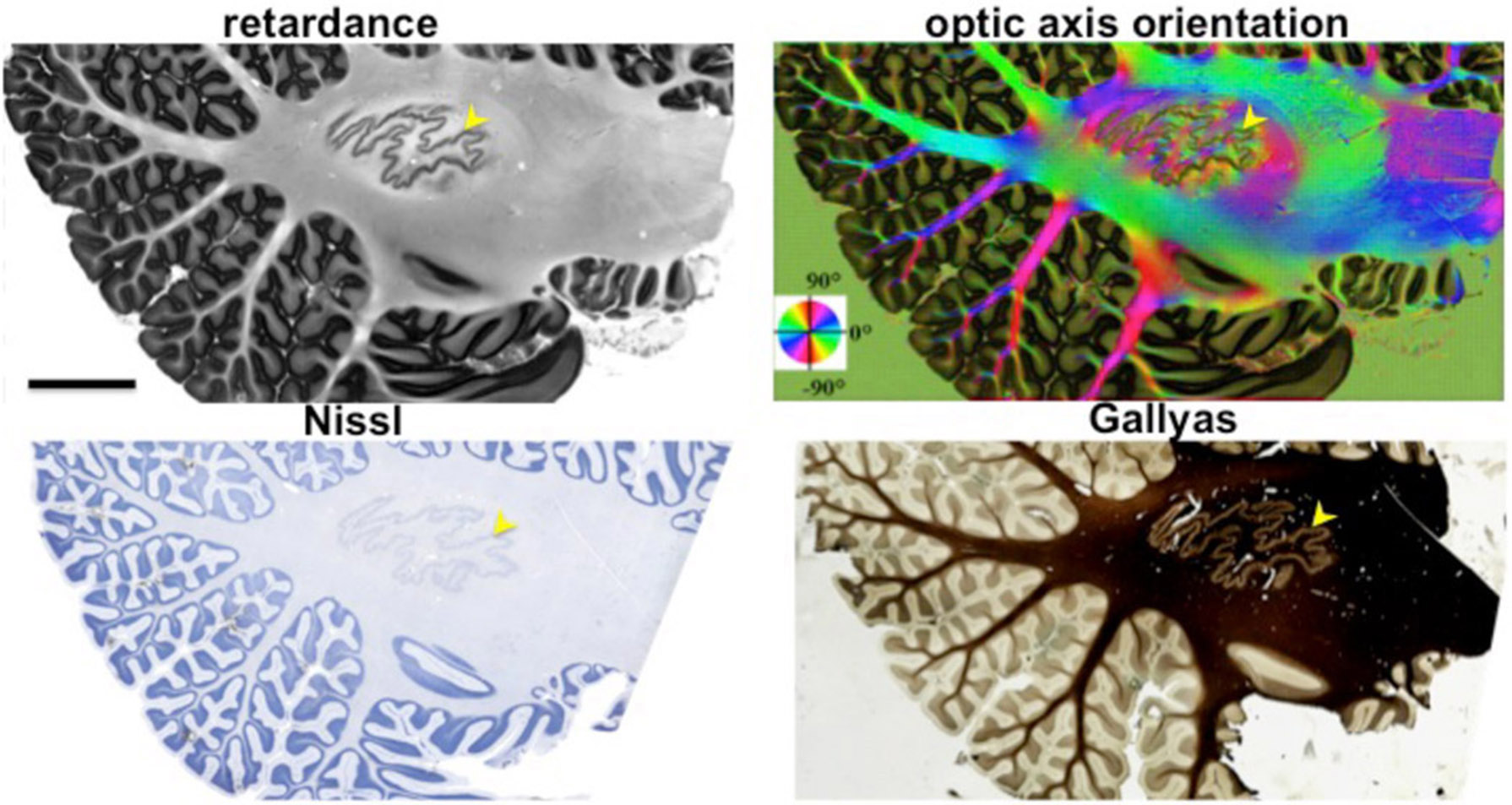 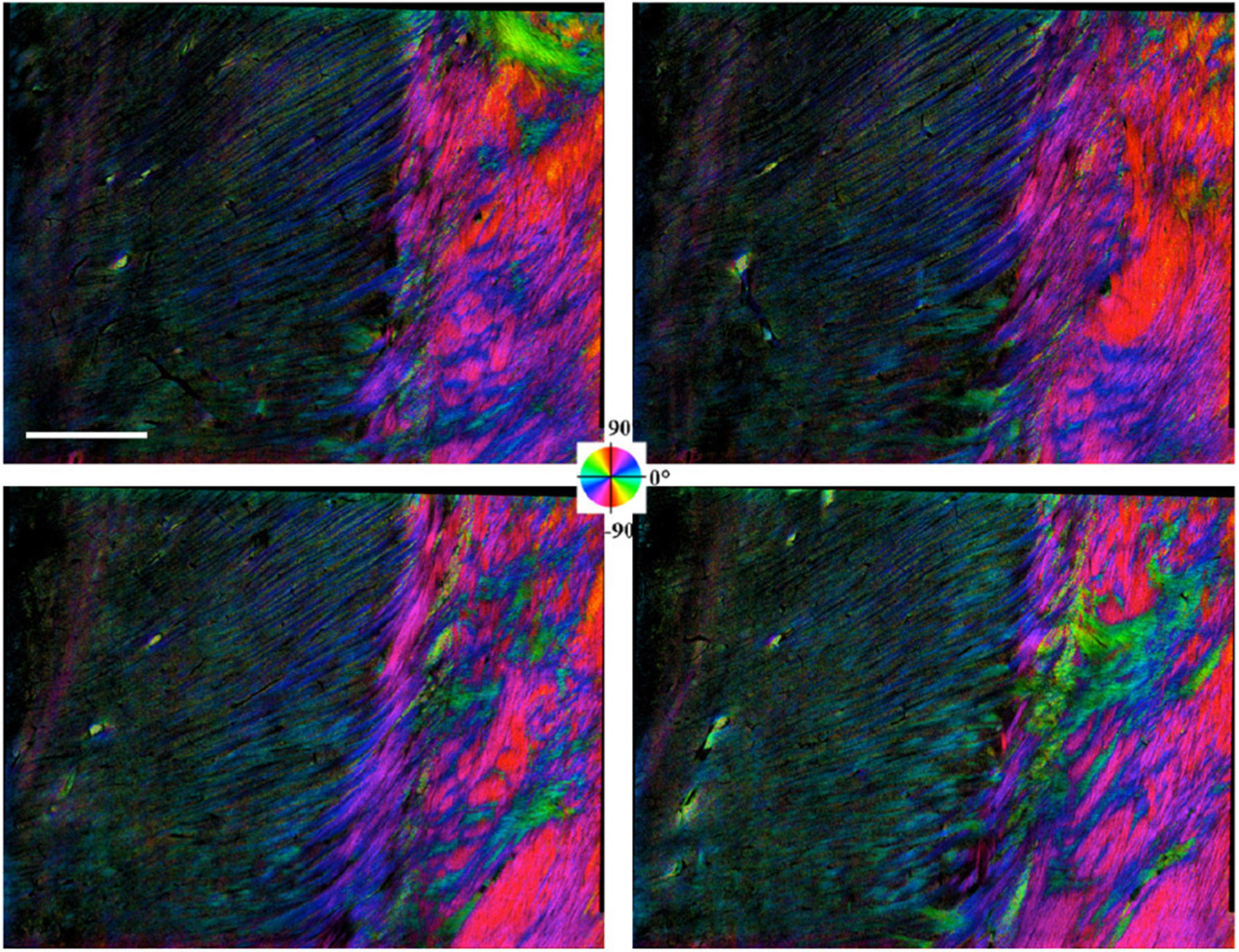 Figure 3. Fiber orientation maps (color-coded according to the color wheel and intensity-weighted by retardance) of subcortical regions, in which many fiber crossings can be seen. Scale bar marks 2mm (the typical voxel size of in vivo diffusion magnetic resonance imaging).

There are, however, currently three main challenges to using our approach for imaging the entire human brain. First, it is necessary to achieve at least a 100-fold increase in the data acquisition rate. Indeed, with our current spectral-domain PSOCT system, we can acquire only 50,000 A-lines per second.9 For comparison, previously demonstrated OCT systems have an acquisition rate that is 20 times greater (1MHz).10, 11 Second, we need to reduce the amount of speckle noise corruption that plagues all OCT imaging (without sacrificing too much speed or resolution). Third, we need to cut larger sections of tissue so that the optical contrast can be maintained. At present, we use a vibratome to cut agarose-embedded fixed human tissue. The width of the cuts we can achieve is limited to 2cm, but blades do exist for cutting widths of up to 7cm. To image the entire human brain, however, 15cm cuts are necessary. A microtome and hardening of the tissue are thus required. Tissue hardening can be achieved by freezing or by embedding paraffin, but the main challenge is to find a tissue-hardening procedure with which the tissue optical contrast of interest can be maintained.

We are also working to develop our method further so that we can perform neuronal fiber tractography over the whole ex vivo human brain, with a volumetric resolution that is 350,000 times greater than dMRI (i.e., 3.5 × 3.5 × 10μm versus 350 × 350 × 350μm, respectively). This should thus enable the study of human brain connections with unprecedented detail. Our technology should have broad scientific and clinical relevance, that is, by providing the ability to accurately image both local and long-range circuitry. With our approach there is the potential to elucidate the biological basis of disorders such as autism, as well as to better understand how the interplay of distant brain regions underlies human cognitive capabilities. The as-PSOCT method also provides a novel and important way to validate and train improved dMRI tractography algorithms that are used on in vivo human data.

In summary, we have developed a novel imaging method—as-PSOCT—for ex vivo brain imaging. So far, we have demonstrated this approach with a proof-of-principle setup and have validated the images against standard histological staining techniques. We can currently achieve an in-plane resolution of 3.5μm and a through-plane resolution of better than 50μm. By making further developments in our image processing technique, however, we aim to achieve a through-plane resolution that is better than 10μm (i.e., 350,000 times better than dMRI). In our ongoing efforts we are also working to overcome the major hurdles to using our technique to map the entire human brain. Namely, we wish to substantially increase the data acquisition rate and to find a tissue-hardening method that allows large (15cm) brain cuts to be made. We are confident that with time and sufficient resources we will meet these challenges, and that within the next decade we will be capable of using as-PSOCT to provide veridical images of the whole human brain at unprecedented resolution and contrast. Our work will thus lead to an improved understanding of normal human brain structure and function, and of the effects of neurological disorders.