Characterizing physical, chemical, and magnetic properties at the nanoscale

Synchrotron light sources are extremely useful for the characterization of materials in many different research fields (including physics, chemistry, materials science, biology, medicine, geology, and cultural heritage). The evolution of technology, however, currently points toward the miniaturization of devices and molecular motors, as well as the creation (through atomic manipulation) of new materials. This brings an acute necessity for direct chemical imaging of materials, i.e., with the use of x-ray microscopy at the nanometer and atomic length scales.1, 2 Although a variety of new x-ray nanoprobes and x-ray microscopy techniques have been developed in recent years, the spatial resolution of direct chemical or magnetic contrast imaging techniques remains on the order of several nanometers.

Invented in the 1980s, scanning tunneling microscopy (STM) allows a large range of materials to be viewed at the atomic level.3 STM also offers a finer degree of spatial resolution than almost any other image technique, but it is chemically ‘blind’ and thus cannot be used alone to directly identify chemical elements on a surface. For many years, researchers have attempted to solve this problem by combining STM with synchrotron x-ray excitations,4–7 and a new technique—known as synchrotron x-ray scanning tunneling microscopy (SX-STM)—has emerged. In this technique—which combines the chemical sensitivity of x-rays with the high spatial resolution of STM—a monochromatic x-ray beam is used to illuminate a tip-sample junction, while the tip makes raster scans across the sample surface. A feedback system maintains a tip–sample separation that is typically less than 1nm. The goal is to modulate the tunneling current through x-ray excitation and therewith obtain electronic and chemical contrast. It is difficult, however, to achieve real chemical contrast because of three serious issues. First, electrons excited by x-rays do not just tunnel into the tip, but can also be ejected from the sample and hit the sidewalls of the tip detector (which degrades the spatial resolution). Second, because photoejected electrons still provide a deceptive current signal in the far field, the STM feedback system can lift the tip out of the tunneling regime without being noticed. Last, the measured tip current is always a convolution of the conventional tunnel current (which is related to the sample topography) and the x-ray-excited electrons (which carry the material's chemical information).

In our work, we have therefore developed a number of solutions to address the three issues associated with SX-STM. To overcome the first problem (i.e., degradation of spatial resolution caused by electron ejection), we have developed specialized smart tips8, 9 that limit the detection of x-ray-excited electrons to the very top of the tip apex. As illustrated in Figure 1(a), our nanofabricated smart tips have a metal–insulator–metal structure. In addition, to resolve the other two STM limitations—the transition of the tip from tunneling, into the far field10 and the inherent convolution of the topography with the chemical information11—we have invented a specialized topographic filter.12 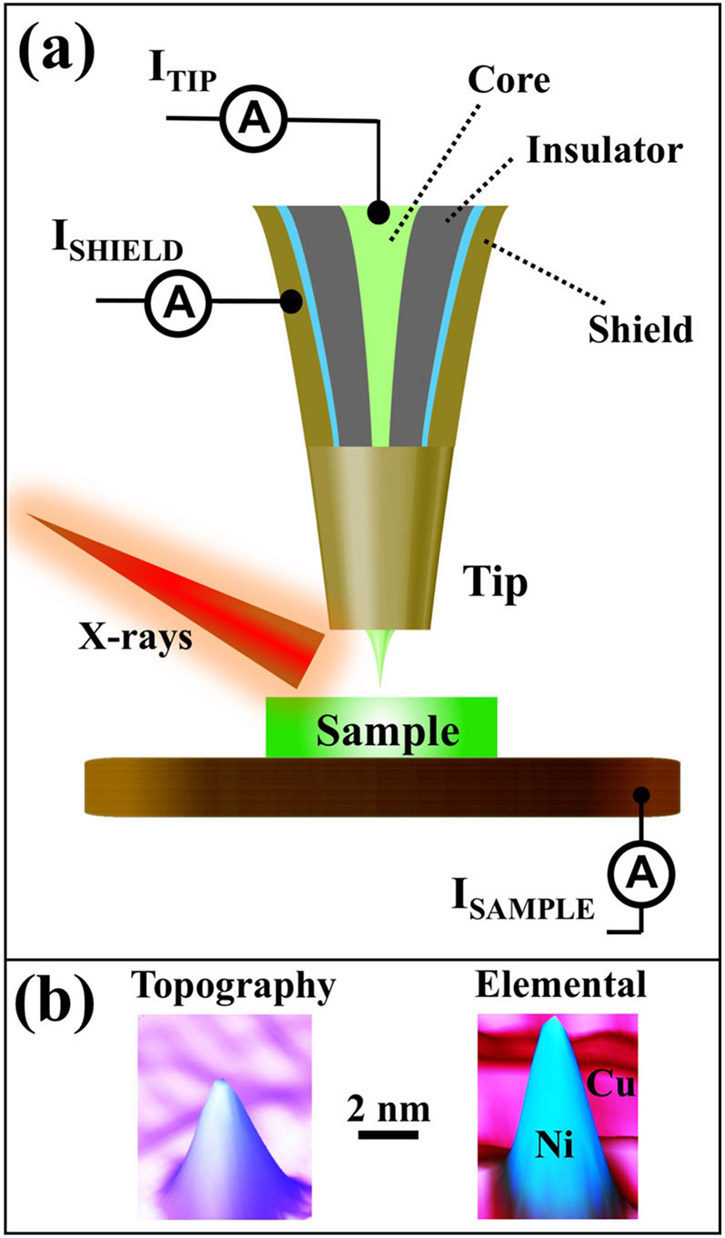 Figure 1. Schematic illustration of the synchroton x-ray scanning tunneling microscopy (SX-STM) technique, where a smart tip is used as the detector and the tip–sample junction is illuminated by monochromatic synchrotron x-rays. The smart tip consists of a metallic core that tunnels over the sample surface, an insulating film to reduce the photoelectron background, and a conductive shield to prevent charging of the tip. The x-ray-induced currents are measured simultaneously at the tip (ITIP), shield (ISHIELD), and the sample (ISAMPLE) to provide the chemical contrast. A: Ammeter. (b) Simultaneously obtained topography and elemental contrast SX-STM characterizations of a nanoscale nickel (Ni) cluster on copper (Cu).

With our developments and inventions we have realized a number of major advances and we have been able to demonstrate—see Figure 1(b)—direct elemental imaging, with atomic-scale sensitivity. For instance, we have achieved a lateral resolution of 2nm and a vertical resolution of a single atomic layer (i.e., the ultimate limit) at room temperature.9 Furthermore, our use of polarized x-rays provides the opportunity to probe the magnetic properties of a sample surface (in addition to gathering the elemental, chemical, and topographic information).13, 14

In recent work, we used circularly polarized radiation to explore local x-ray magnetic dichroism spectra with a tunneling tip.15 For example, topographic, chemical, and magnetic information obtained from a thin iron film is shown in Figure 2. For each pixel in these images, we used both left- and right-circularly polarized x-rays (LCP and RCP, respectively) to record the SX-STM signals for selected photon energies. The topographic map shows a flat terrace and a step feature (with an average height of about 0.5nm). The chemical map that we acquired simultaneously illustrates the localization of the SX-STEM measurement, i.e., it shows two different domain-type areas, with a shape that is clearly different from the observed surface topography. The onset of oxidation in some areas of the iron surface explains the observed chemical contrast. In addition, the magnetic properties of the sample (obtained from the LCP–RCP difference) provide clear proof of x-ray magnetic circular dichroism at the iron L2 and L3 (absorption) edges. With this work, we have thus demonstrated a path toward magnetic characterizations, with ultrahigh spatial resolution. 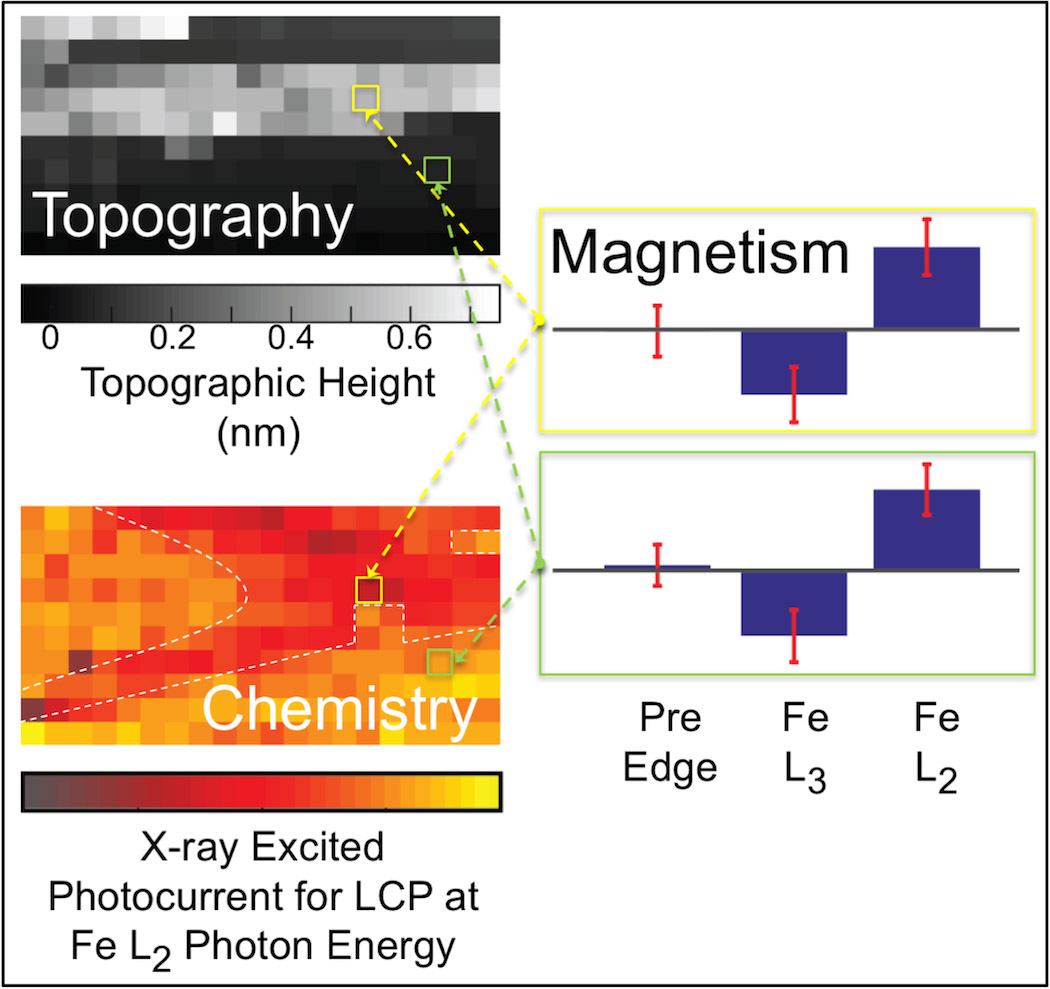 In summary, we have developed a number of novel solutions to address problems with the technique of synchrotron x-ray scanning tunneling microscopy. Our innovations include specialized smart tips and topographic filters. With these advances, we have thus demonstrated direct elemental imaging on the atomic scale. We can also use polarized x-rays to simultaneously probe the magnetic, elemental, chemical, and topographic properties of a surface. To make our SX-STM technique available to the wider scientific community, we are currently constructing a new synchrotron beamline branch at the US Department of Energy's Argonne National Laboratory that will be dedicated to the technique. This branch will be known as XTIP and will become operational in 2018. In addition, a newly developed low-temperature SX-STM will provide researchers access to a one-of-a-kind instrument (see Figure 3). By pairing the capabilities of synchroton x-ray analysis with extremely precise microscopy in XTIP, we will be able to offer a new way to simultaneously determine the physical structure, chemical makeup, and magnetic properties of materials at close-to-atomic scales. In turn, this will open up new routes to the exploration of novel phenomena, and to the fabrication of the next generation of nanoscale materials, for a wide assortment of applications. 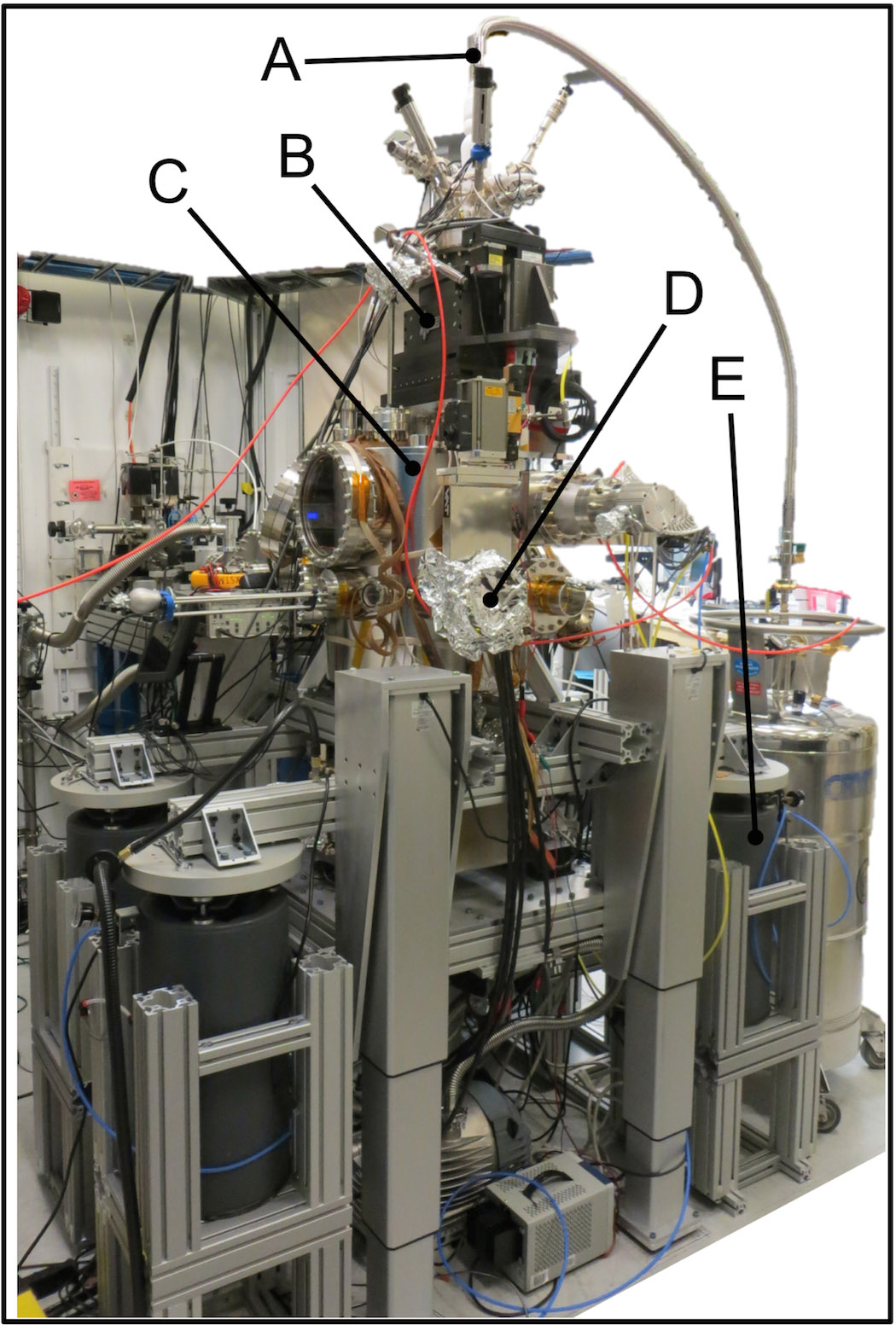 Figure 3. Photograph of the SX-STM V3 system at Argonne National Laboratory that will be operated at the future XTIP beamline branch of the Advanced Photon Source and the Center for Nanoscale Materials. A: Liquid helium flow cryostat. B: An xyz-rotation coarse motion stage. C: Ultrahigh vacuum (UHV) chamber housing the microscope. D: Gate valve to attach the UHV suitcase for in situ sample transfer. E: Vibration isolation.

This work was funded by the Office of Science Early Career Research Program through the Division of Scientific User Facilities, Office of Basic Energy Sciences of the US Department of Energy through grant SC70705. Work at the Advanced Photon Source and the Center for Nanoscale Materials was supported by the US Department of Energy, Office of Science, Office of Basic Energy Sciences, under contract DE-AC02-06CH11357.

Volker Rose is a physicist at Argonne National Laboratory and an adjunct professor at Ohio University. He holds an advanced degree in physics and received a doctoral degree from RWTH Aachen, Germany. His research is focused on the study of nanoscale materials, by means of high-resolution x-ray microscopy techniques.