As light propagates through a material, it accumulates changes (i.e., to its phase, polarization, and amplitude) that transform the incident wavefront.1 With conventional refractive optics, the thickness profile of an element is varied to induce spatially variant changes to these properties. In this manner, the function of an optical element is heavily dependent on its geometry. Historically, manufacturability has limited component types to those with rotational symmetry and low-curvature profiles. However, profiles that are characterized by higher-order polynomials (i.e., more than two) with high curvatures and asymmetry can exhibit useful properties that enable the correction of aberrations,2 off-axis imaging,3 field-of-view expansion,4 and an increase to the depth of field.5 In the field of freeform optics, components of this nature are developed with an aim to minimizing their weight and size.6

Recent interest in freeform optics has been driven by potential applications in near-eye displays7, 8 and compact optical systems for medical, aerospace, and mobile devices (i.e., for which there are stringent size and weight constraints). Unfortunately, elements with high curvatures and complex forms are often difficult to manufacture with existing technologies, particularly at the micron scale. Metasurfaces—planar structures that are composed of quasiperiodic arrays of sub-wavelength scatterers (i.e., optical antennas)—can control the phase, amplitude, and polarization of incident light. Such surfaces can mimic complex geometric curvatures on a flat, wavelength-scale-thick surface,1, 9,10 thus providing an excellent platform for nanoscale freeform optics. Furthermore, inexpensive and simple fabrication methods can be used in the development of such freeform elements.

We have designed and fabricated metasurfaces that operate at visible frequencies using silicon nitride (Si3N4): see Figure 1(a).11,12 Si3N4 is an ideal material for visible-frequency operation because of its low propagation loss. Furthermore, by choosing appropriate geometric parameters (i.e., periodicity, duty cycle, and thickness), we can tune the phase shift that is imparted to the incident wavefront. In our design process, we take the spatial thickness profile of a freeform element and calculate the induced phase shift as a function of position. This phase shift is then projected onto a lattice of discrete phase-shifting pixels that are made up of Si3N4 cylindrical posts on a silicon-dioxide substrate.12 The feature sizes that we used in our design are well within the scope of state-of-the-art deep-UV lithography and could therefore be manufactured in high volume. 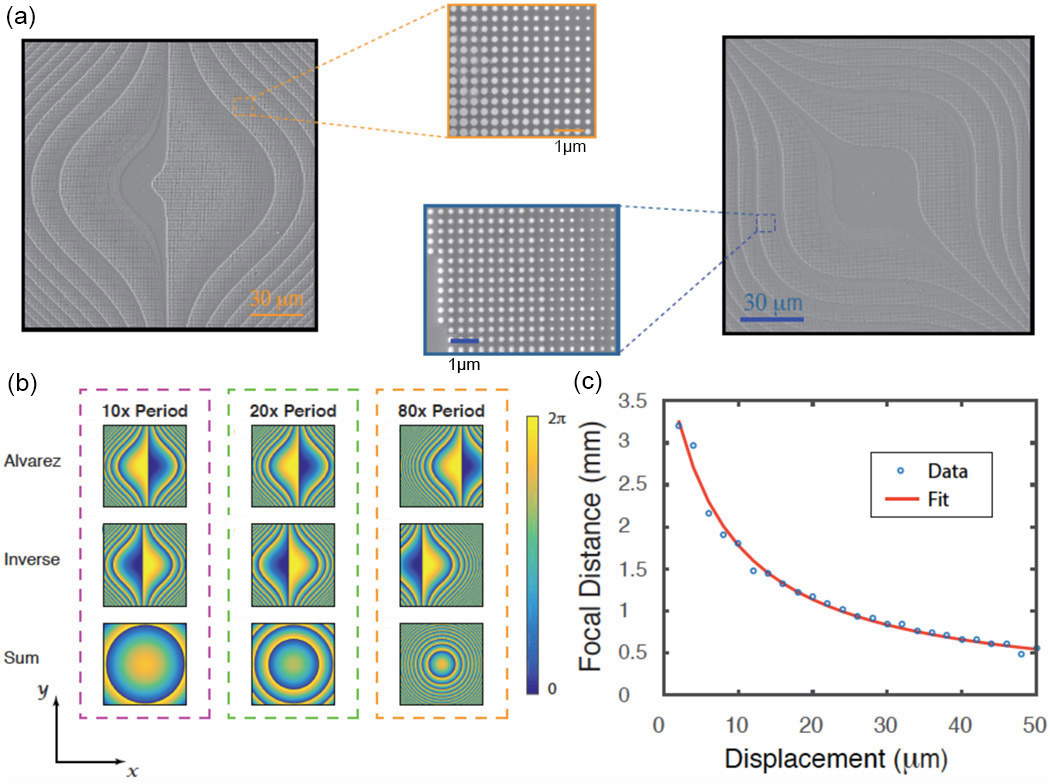 Figure 1. Dielectric metasurface freeform optics. (a) Scanning electron micrograph of the fabricated cubic phase plates, which together form a composite Alvarez lens. (b) By laterally displacing these two cubic phase plates, we can realize a lenslike (quadratic) phase profile with varying curvature and, hence, different focal lengths. The phase profiles shown are for lateral displacements of 10, 20, and 80×the metasurface periodicity. (c) Experimentally measured focal length as a function of the lateral displacement, showing a nonlinear change.

We first evaluated our approach to metasurface-based freeform optics by designing metasurfaces with cubic profiles. In conjunction with a lens, cubic elements exhibit a depth-invariant point-spread function (PSF) that can extend the depth of focus of an imaging system.13 We measured the PSFs of our cubic metasurface elements at different image distances, and for both green and red light. We also performed similar measurements for a metasurface lens to provide a comparison. In the case of the cubic element, we observed highly invariant PSFs. In contrast, those of the lens were very sensitive to on-axis translations.11 By switching between red and green illumination, we also found that the PSFs were largely invariant. Although metasurfaces are generally highly chromatic, the similarity between the PSFs at red and green wavelengths could potentially be exploited to achieve a broadband achromatic metasurface imaging system for white-light imaging.

Although the exact definition of freeform optics can be debated, the Alvarez lens is widely considered an archetypal freeform optic. This device comprises two cubic phase plates of opposite sign. As such, their phase contributions exactly cancel when they are stacked vertically. When the plates are translated laterally, however, the net phase shift becomes the differential of the cubic profile. A quadratic profile, equivalent to that of a lens, is therefore produced (i.e., where the focal length depends on the magnitude of the displacement). Using two cubic metasurfaces and laterally displacing them, we realized a quadratic lenslike phase profile with a tunable focal length: see Figure 1(b). The change in focal length is inversely proportional to the physical displacement, and thus a small range of physical displacement (i.e., ∼10μm) results in a large focal length tuning range (i.e., 1mm), as illustrated in Figure 1(c). We emphasize that, as this displacement is in the lateral direction, the overall size of the optical system can be very compact. The small physical displacement could easily be achieved using integrated microelectromechanical actuators.

In summary, our work explicitly establishes the connection between the two growing and emerging fields of metasurface and freeform optics for the first time. The adaptation of freeform optics to a sub-wavelength metasurface platform allows for the ultimate miniaturization of optical components and systems, offering a scalable route toward implementing near-arbitrary geometric curvatures in nanophotonics. These ultracompact metasurface freeform optics could find use in next-generation near-eye visors, vision-correcting eyewear, compact machine-vision cameras, and implantable microscopy. We are currently exploring the possibility of white-light imaging using freeform metasurface optics (i.e., by exploiting the extended depth of focus in a cubic surface) and designing quantic (i.e., fifth-order polynomial) surfaces for near-eye visors. Additionally, we are investigating large-scale manufacturing techniques for building large-area metasurface optics.

Arka Majumdar is an assistant professor of physics and electrical engineering. He received his PhD from Stanford University and completed his postdoctoral work at UC Berkeley and Intel Labs. His research interests include integrated quantum and nanophotonics devices.

Alan Zhan is a third-year graduate student in the physics department. He received his BSc in physics from the University of California, Santa Barbara, in 2014, and is currently researching methods for the integration of multiple metasurfaces into compound optical elements. He is a recipient of the Clean Energy Institute Graduate Fellowship at UW.

Shane Colburn is a second-year graduate student in electrical engineering. He received his BSc in physics and electrical engineering at UW in 2015 and is currently conducting research on tunable and achromatic metasurface optical elements. He has won several awards, including the Microsoft Endowed Scholarship, UW NASA Space Grant, and the Arthur and Linda Pederson Engineering Scholarship.