An atomic velocity sensor based on the light-dragging effect

A velocity sensor (or velocimeter) is a device used to measure the rate of change of a moving object's position. Such devices (which have important applications in, e.g., navigation and manufacturing) are typically based on measuring the first-order Doppler shift of electromagnetic waves that are reflecting or scattering off of a moving object. In the quantum regime, the velocity measurements of particles are important for studying fundamental physics. As an example, when a photon is absorbed by an atom, the atom will gain a recoil energy, or recoil velocity. By measuring this recoil velocity from the spectral shift of the atomic resonance, the fine-structure constant can be determined and the theory of quantum electrodynamics tested.1 Another example of its usefulness is in the measurement of the local gravitational acceleration of two different species of free-falling atoms (to test Einstein's equivalence principle).1

All atom-based sensors rely on measuring the first-order Doppler shift of the atomic transition. By using Doppler-sensitive methods to detect the population of atomic states, the velocity can be measured precisely. However, due to the thermal distribution of an atomic ensemble, the uncertainty of the measurement is limited by the Doppler width of the ensemble. Thus, to determine its center-of-mass motion, one usually needs to map or truncate the velocity distribution of the ensemble. This approach complicates the process and lowers the data rate.1

In our experiment, we demonstrate the light-dragging effect (i.e., the deviation of the phase velocity of an electromagnetic wave from the speed of light in a moving medium) and use it to directly sense the center-of-mass motion of an atomic ensemble. The light-dragging effect was first observed by Fizeau in a flowing-water experiment for the study of ether, before the era of Einstein's special theory of relativity. It was later explained by the Lorentz addition to the first order of velocity in the equation related to Einstein's theory.2 The effect (illustrated in Figure 1) can be enhanced by increasing either the index of refraction or the dispersion of the medium. In a normal medium, the index of refraction is typically on the order of one. However, the dispersion of a medium can be greatly modified through nonlinear interaction with light. Based on this principle, we use an electromagnetically induced transparency (EIT) scheme to modify the susceptibility of the medium to make it transparent to light, even at resonance, while maintaining a large dispersion.3 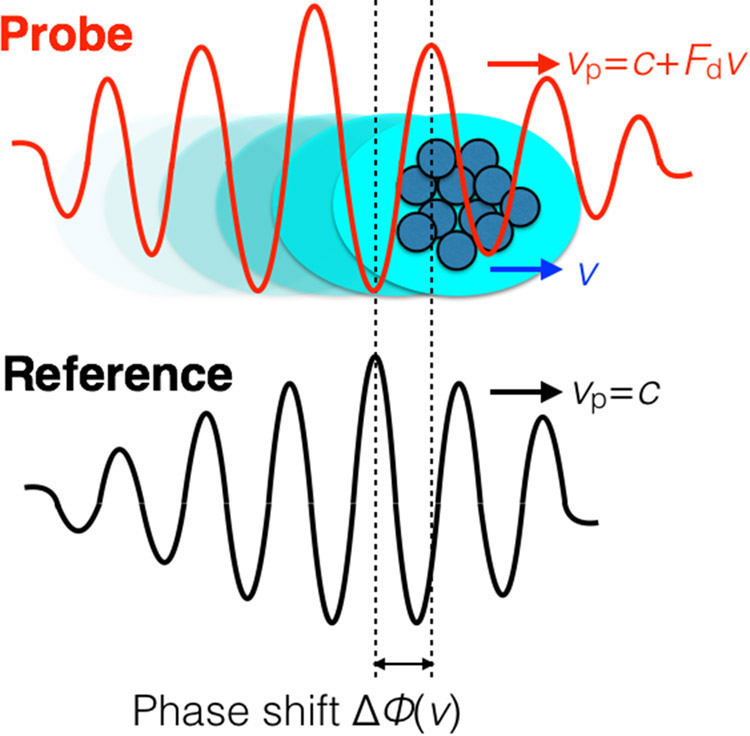 Figure 1. Illustration of the light-dragging effect in a moving medium. The phase velocity (Vp) of light is modified by an additional term, FdV (where Fd is the dragging coefficient and V is the velocity of the moving medium). The dragged light has a phase shift of ΔΦcompared to a reference light. c: The speed of light in a vacuum.

A typical EIT scheme includes a simple three-level atomic system that is excited by two optical fields (i.e., the ‘probe’ and ‘control’ fields). When the control field is on, the dispersion and absorption properties of the probe field are modified. This extraordinary result has been used to slow down the group velocity of light in atomic vapors to tens of meters per second without absorption.4 To create our moving object, we prepared an ensemble of around 108   85Rb (rubidium) atoms at about 40μK under ultrahigh vacuum by using laser cooling and laser trapping techniques.5 The size of the ensemble is about 3mm, and its velocity is increased by the radiation pressure from an optical push field, where atoms gain momentum (see Figure 2). 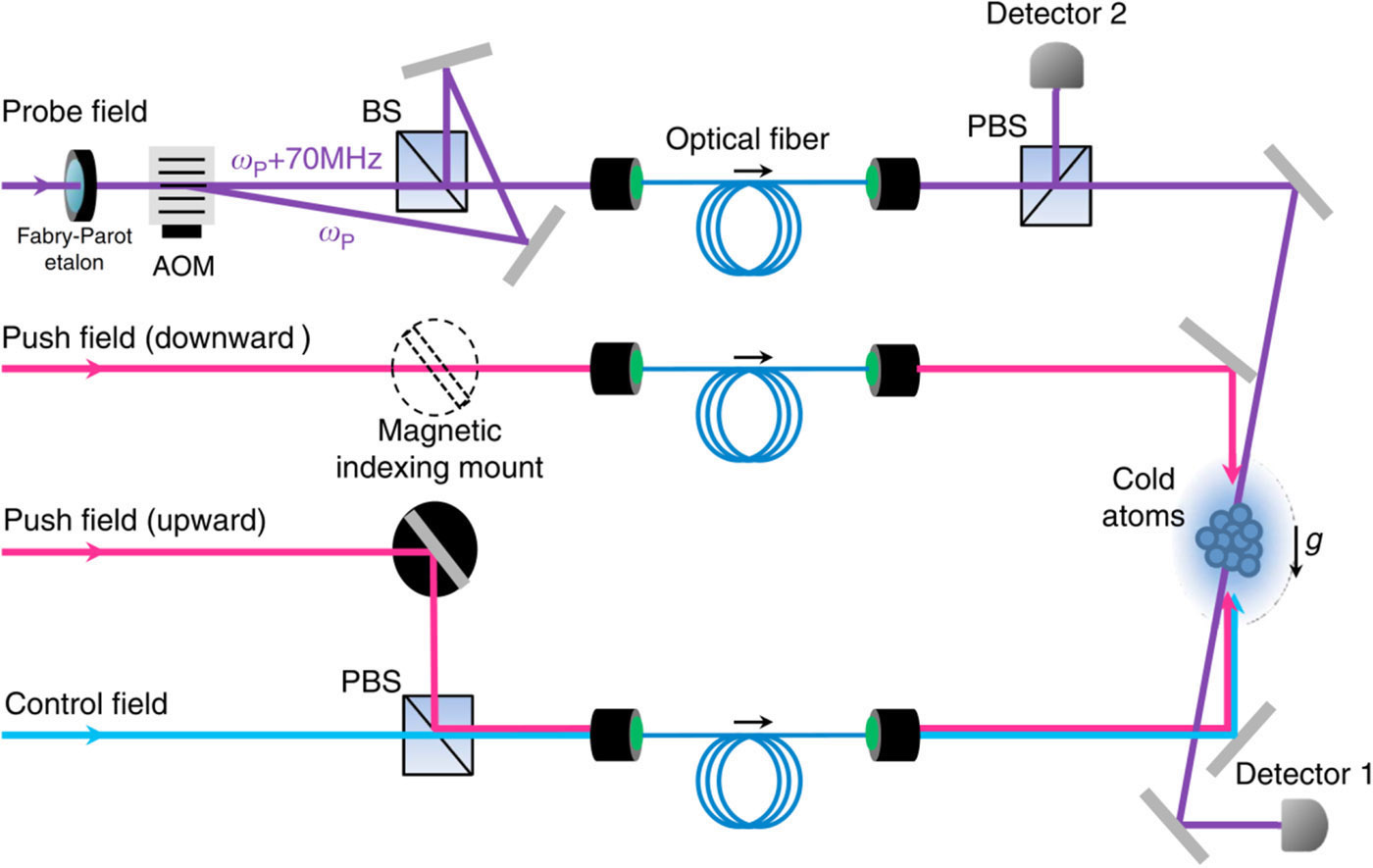 Figure 2. A schematic showing our setup for testing the principle of our atomic motion sensor. Cold atoms are under free fall in vacuum, and we use a magnetic indexing mount to switch between pushing these atoms upward and downward. In the upward push-field setup, the push field is overlapped with the control field and coupled to a single-mode fiber. In the downward push-field case, the push field is coupled backward to the control-field fiber port (with 75% coupling efficiency) to ensure the overlap of the control and push fields. Detector 2 records the reference field, enabling us to compare the phase of the probe field from Detector 1 on an oscilloscope. The probe and control fields are aligned at around 183°, and the probe field is modulated by 70MHz for phase comparison purposes. g: Local gravity. ωp: Probe-field frequency. BS: Beam splitter. PBS: Polarizing beam splitter. AOM: Acoustic-optical modulator.5

To test our system, we compare the phase shift of the probe field through the EIT medium with a reference field that travels in a vacuum. Our measurements show that the phase shift is proportional to the velocity of the atomic ensemble, and that the light-dragging effect is enhanced by two orders of magnitude compared with previous experiments. Moreover, with a phase-detection uncertainty of 0.01 radians, the sensitivity of the velocity measurement of the atomic ensemble can reach 1mms−1, as shown in Figure 3. This sensitivity is two orders of magnitude higher than the Doppler width of the ensemble used.5 In a simple analogy, this is equivalent to measuring a thin hair using a regular ruler with a resolution of 1mm. 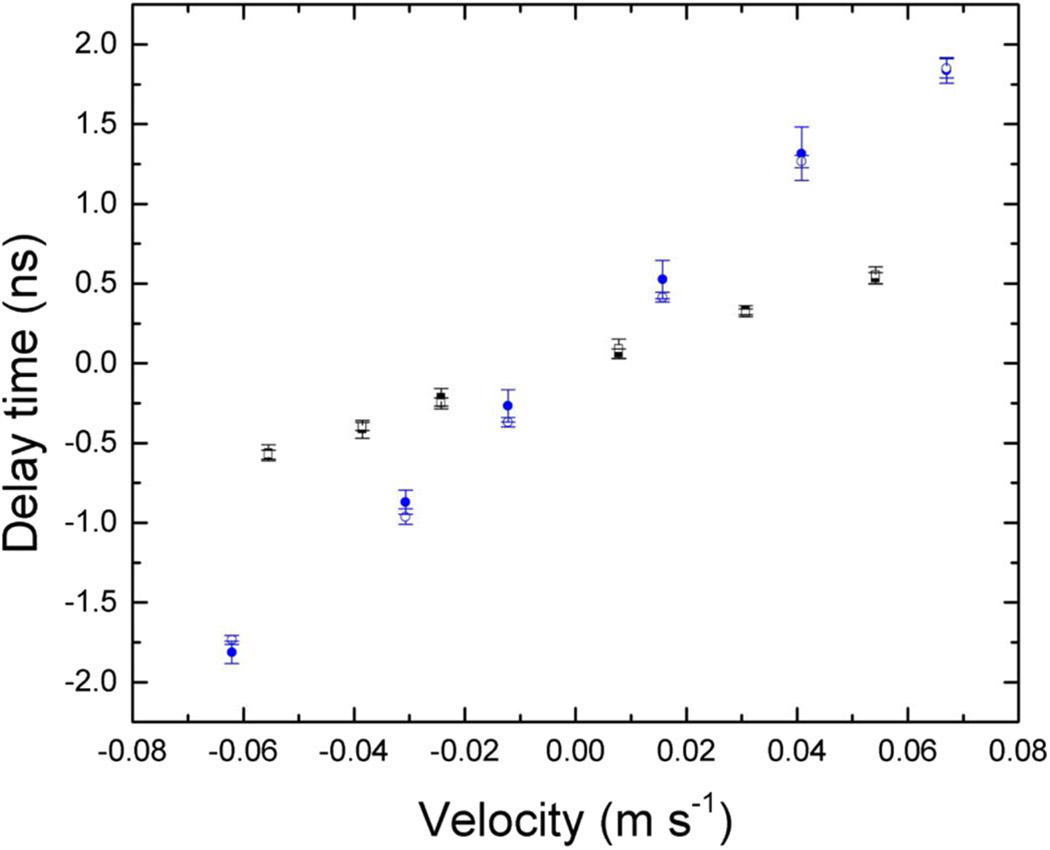 Figure 3. Delay time of the dragged light (compared with a reference light) as a function of the velocity of the moving medium. The blue and black points are measurements made under different dragging coefficients. The open and solid points are calculated and measured values, respectively.5

In summary, we have presented a new type of atomic motion sensor that depends on the collective motion of the atomic ensemble. In our sensor system, the preparation of a sample with a narrow velocity width is not required to improve the sensitivity. Moreover, detection of light is more flexible than fluorescence detection of the population of atomic states (i.e., where the photon efficiency is limited by the apparatus), as it can be carried out remotely. In our future work, we plan to build a more compact atomic motion sensor with room-temperature atomic vapor cells that does not require laser cooling and trapping steps. This development would enable us to avoid the complexity of cold-atom setups and may lead to wider applications (e.g., testing Einstein's equivalence principle using combinations of different atomic species, and mobile gravitational-field surveys).