Advances in nanofabrication have led to the realization of dielectric nanocavities that can confine light to a nearly diffraction-limited volume. By combining such nanocavities with a gain medium, the resulting ‘nanolasers’ exhibit a peculiar emission compared to conventional lasers. In contrast to the traditional signatures of lasing—i.e., a sharp increase in the intensity in parallel with a narrowing of the emission spectrum, due to the amplification of stimulated emission—the lasing transition becomes blurred in the nanolaser case. This blurring occurs because spontaneous photon emission is efficiently coupled to the nanocavity mode. As a result, the conventional intensity increase and emission linewidth are not frequently observed in nanolasers. Instead, high-β nanolasers (i.e., those with a high spontaneous-emission coupling efficiency) exhibit a lasing transition while maintaining a small average number of photons stored in the cavity mode (roughly between one and 100).1

In this regime, basing analysis on conventional laser-rate equations becomes problematic.2 One must instead assess the threshold based on the statistical nature of the emitted light.3 Experimentally, the evolution of the second-order intensity autocorrelation function at zero-time delay—i.e., g(2)( 0)—must be monitored as a function of pump power. This quantity exhibits a transition from thermal or bunched photon statistics (i.e., chaotic photon emission), for which bunches of photons are emitted as a function of time—for which g(2)(0)> 1—to coherent or random photon statistics, for which photons are randomly emitted as a function of time, i.e., g(2)(0)=1. Remarkably, the larger the β value, the smoother the lasing transition, and hence the less defined the threshold.4 This also gives rise to an increasing weight of quantum fluctuations due to the small number of photons close to threshold.

To obtain additional insights into the emission features of nanolasers, we investigated the main properties of blue-emitting high-quality-factor (Q) III-nitride (III-N) nanobeam photonic crystal (PhC) cavities containing a single indium gallium nitride/gallium nitride (InGaN/GaN) quantum-well gain medium, grown on silicon: see Figure 1(a).5 III-N nanobeam PhC cavities exhibit continuous-wave blue lasing (λ=445−460nm) at room temperature in contrast to photonic structures made from other III-V semiconductors, which are typically operable at cryogenic temperatures.3, 4,6 We confirmed lasing in the III-N cavities by making power-dependent g(2)(0) measurements in a Hanbury-Brown and Twiss interferometer. The results show a progressive transition from thermal emission to the Poisson (coherent) limit: see Figure 1(b).7 Temperature-dependent input-output curves reveal a complex interplay between the zero- and two-dimensional nature of the quantum well gain medium. Subsequent improvements that we made in the fabrication of our nanobeam cavities—see Figure 2(a)—lead to a twofold increase in the Q value—see Figure 2(b)—with a high fabrication yield of >95%. After an experimental statistical analysis of nominally identical nanostructures, we found that neither absorption nor existing disorder models are capable of explaining the limitations on the experimental cavity Q factor. Our further experiments, which consist of coating the fabricated nanostructure with hafnium oxide via conformal deposition, suggest that nanoscale roughness is important at short wavelengths.8 Indeed, we observed a systematic decrease in Q for the coated devices, indicating that the PhC cavity surface is extremely sensitive to any perturbations. This is supported by the inability to account for such a decrease through 3D finite-difference time-domain simulations, even with a grid resolution of a few nanometers. 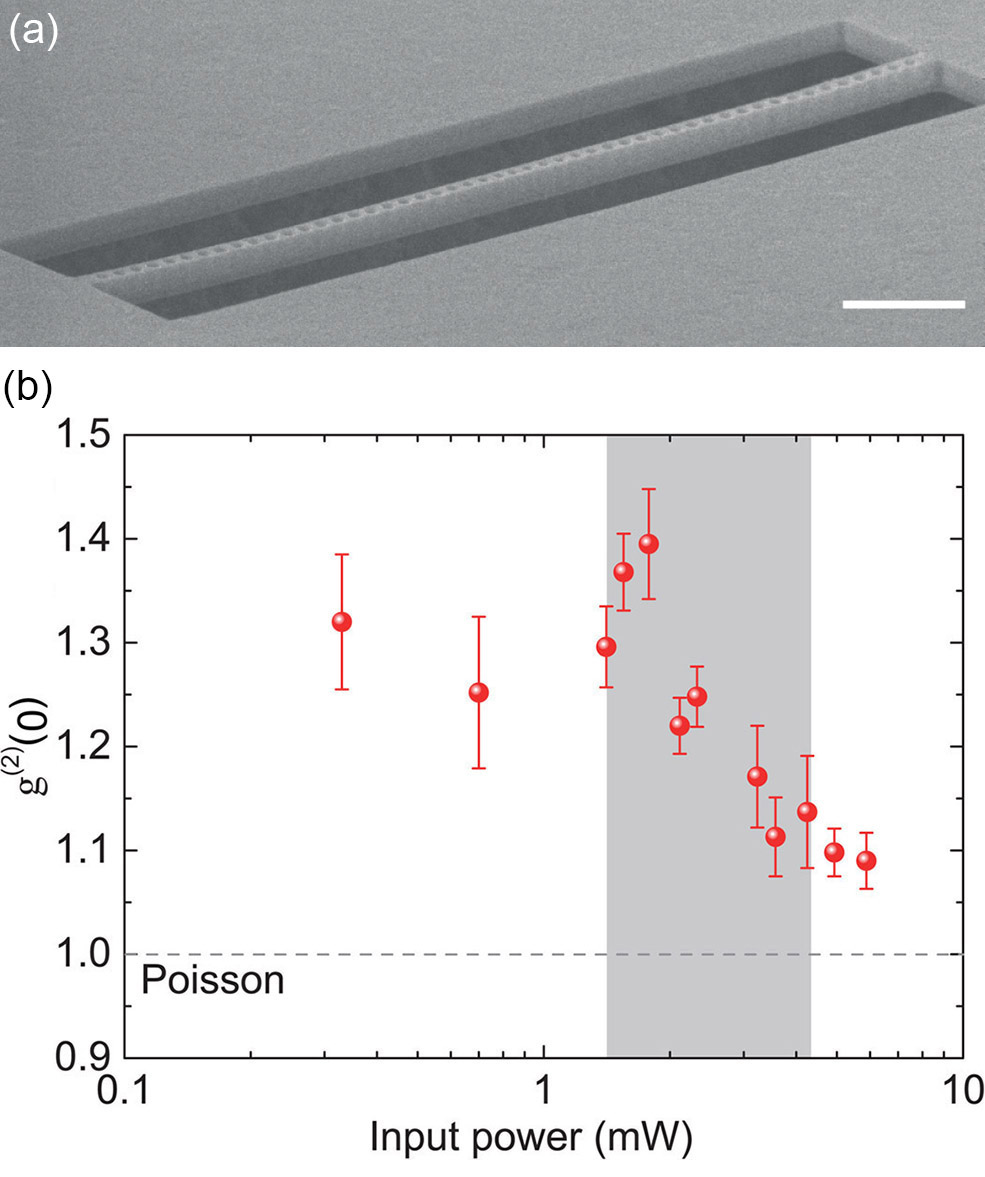 Figure 1. (a) Scanning electron micrograph (SEM) of a first-generation III-nitride photonic crystal (III-N PhC) nanobeam suspended in air over a silicon substrate (scale bar =1μm). (b) Value of the second-order intensity autocorrelation function at zero-time delay—i.e., g(2 )(0)—measured on a III-N PhC nanobeam as a function of input power. 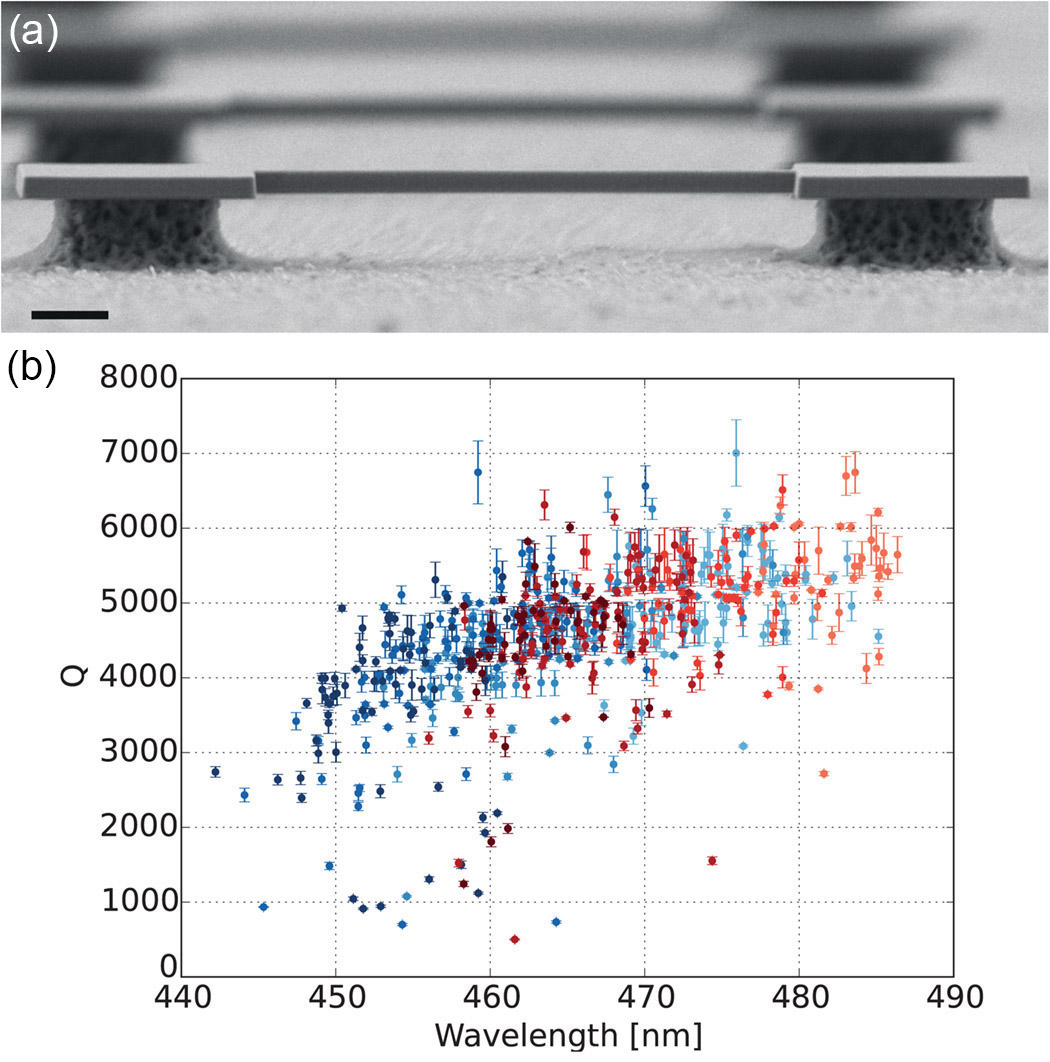 Figure 2. (a) SEM of III-N PhC nanobeams suspended in air over a silicon substrate, adopting a novel design (scale bar = 1μm). (b) Experimental quality factor (Q) measured on a large set of PhC nanobeam cavities with a fabrication yield of 97%.

Finally, we introduced a sidewall Bragg cross-grating coupler to enhance the efficiency of our device: see Figure 3. This coupler increases the collected photoluminescence signal from such nanostructures by nearly one order of magnitude.9 Such an increase will facilitate future optical characterizations, including g(2)(0) measurements. In the next stage of our work, we intend to decrease the sensitivity of these nanolasers to surface imperfections by tailoring the internal distribution of the electromagnetic field. This should push the Q factor of the device toward values compatible with strong light-matter coupling between a single emitter and a cavity mode, as well as enable us to explore frequency conversion (such as two-photon emission).

Beyond engineering light-matter interactions at the nanoscale and the emergence of coherent light at the few-photon level, our investigations illustrate the potential of such a platform for a number of practical uses. Foreseeable applications range from small-footprint, low-threshold coherent emitters for photonic integrated circuits, lab-on-a-chip light sources, and biocompatible light emitters that are suitable for single-cell optogenetic experiments.10 III-N nanoemitters may one day allow rapid and precise manipulation of cellular activity by exploiting the sensitivity of engineered proteins to blue and green photons.

The authors acknowledge financial support from the German Research Foundation via the D-A-CH project (Re2974/8-1), the European Research Council under the European Union's Seventh Framework Programme (grant agreement 615613), the NCCR Quantum Photonics—a research instrument of the Swiss National Science Foundation (SNSF)—(grants 200020-113542, 200020-150202, and 200020-162657), and the DACH-FNS, a joint research program between the Deutsche Forschung Gemeinschaft and the SNFS (grant 200021E-154668).

Raphaël Butté is a senior scientist. His research activity deals with microcavities, planar waveguides, and photonic crystals made from III-N semiconductors with a focus on polariton condensates, waveguided exciton-polaritons, and high-β photonic crystal nanolasers.

Ian Rousseau received his BSc in physics from the Massachusetts Institute of Technology (MIT) in 2010 and his MSc in physics from Universität Konstanz in Germany in 2012, following a Fulbright research fellowship. He is currently pursuing a PhD.

Noelia Vico Triviño received her MSc and PhD from the University of Granada in Spain and EPFL, respectively. In 2015, she was awarded a grant by the Swiss National Science Foundation to pursue her career at MIT as a postdoctoral researcher.

Nicolas Grandjean received his PhD in physics in 1994 and subsequently joined the CNRS. He was appointed assistant professor at EPFL in 2004 and was then promoted to full professor in 2009. He has also received the ‘Nakamura Lecturer’ award. His research interests are centered on the physics of wide-bandgap semiconductors.