On-chip optical and photonic devices are key to major advances in fields as diverse as optical communications, sensing, and quantum physics. These integrated devices enable complex optical functionalities on a single chip (i.e., within a few square millimeters) that might otherwise occupy an entire optical table when implemented with bulk optical components. Currently, many commercial photonic chips are made from group III–V materials (i.e., containing elements in groups 13 and 15 of the periodic table), such as indium phosphide. Over the past decade, integrated photonic systems based on group IV materials—elements in group 14, particularly silicon and germanium—have drawn a lot of attention and are being developed by research groups around the world as well as industrial players, such as IBM and Intel. The main advantage of silicon photonics is that the CMOS infrastructure of the micro-electronics industry can be leveraged, potentially leading to high-volume and low-cost fabrication. However, in terms of performance and optical bandwidth—the range of optical wavelengths (colors) that a device can process accurately—many integrated photonic devices cannot yet compete with their bulk-optics counterparts. Here, we present a new silicon optical waveguide device that offers high performance and ultra-broad bandwidth operation with a very compact footprint.

In photonic devices, the flow of light is governed by variations in refractive index, which engineers exploit in a range of materials to enable optical functionalities (e.g., for optical waveguides). In silicon photonics, the choice of materials is limited to silicon (with a refractive index n ≈ 3.5), silicon dioxide (n ≈ 1.4), and several polymers (n ≈ 1.6), which hinders the fabrication of high-performance, high-bandwidth devices. This limitation can be overcome using layers of materials with different thicknesses, which produce different effective refractive indices.1, 2 However, this technique requires several extra fabrication steps, and it is difficult to precisely control the resulting effective refractive indices. Another technique is based on arranging alternating materials on a sub-wavelength scale, so the light wave ‘perceives’ the composite structure as a homogeneous medium with a volume-averaged refractive index.3, 4

The use of sub-wavelength composite structures to engineer an artificial medium for silicon waveguides was pioneered by Pavel Cheben and colleagues at the National Research Council of Canada to optimize fiber-to-chip couplers.5 Light propagates in the form of Bloch-Floquet modes—electromagnetic field configurations that propagate through a periodic structure without changing shape—in these segmented waveguides (composed of alternating layers of silicon and silicon dioxide) and the propagation is in theory completely lossless as long as the period of the structure is below the Bragg threshold, i.e., shorter than half a wavelength of light in the waveguide (typically ∼250nm). The refractive index of the artificial medium is readily controlled by the geometry of the sub-wavelength structure, which can be fabricated in a single etching step. In recent years, this technique has found widespread application for high-performance silicon photonic devices.6

We have recently developed an on-chip optical beamsplitter using these sub-wavelength structures that offers both high performance and ultra-broadband operation (see Figure 1).7 The beamsplitter is based on multimode interference (MMI), also known as the Talbot effect. A light wave is coupled into the device through one of the tapered input waveguides, and excites several modes in the central multimode region. These modes interfere to form multiple images of the input light wave at positions dictated by the so-called ‘beat-length’ of the device. By placing the two output waveguides at the position of the two-fold image, beamsplitting is achieved: each of the two output waves carries half of the input power and is phase shifted by 90°. In conventional MMIs, the beat-length is strongly wavelength-dependent, and hence the two-fold images form at different positions as the wavelength is varied. Given that the position of the output waveguides is fixed, this results in a de-tuning of the device, limiting the operational bandwidth. This limitation can be overcome by exploiting the natural birefringence of the segmented device—see Figure 2(a)—and is analogous to that of a uniaxial crystal. A light wave polarized parallel to the grating segments (E∥ blue line) and traveling in the z direction (E∥ black arrow) experiences the effective refractive index nxx. However, a light wave polarized perpendicular to the grating segments (E⊥ blue line) and traveling in the x direction (E⊥ black arrow) experiences a different effective refractive index nzz. By modeling this anisotropy with an equivalent effective refractive index tensor, we derived a semi-analytical expression for the beat-length of this sub-wavelength structured device. Judicious design of the sub-wavelength structure then gives the required values of nxx and nzz to achieve a virtually wavelength-independent beat-length, enabling broadband operation. Finite difference time domain simulation indicates that optical bandwidths of 500nm are attainable, exceeding all optical communication bands combined. Furthermore, the nanostructuring reduces the footprint of the device by a factor of approximately three compared to conventional devices.7 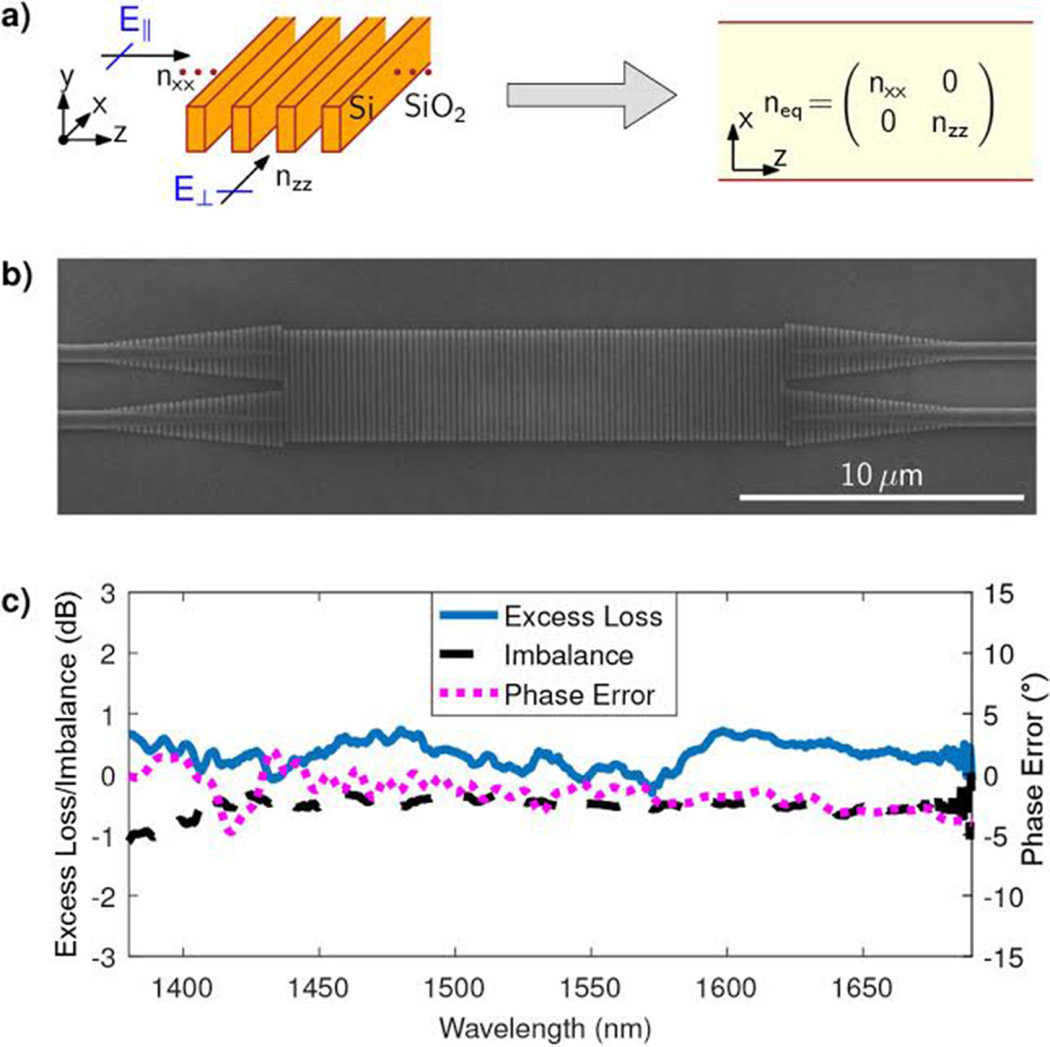 We used a fiber-coupled broadband source to inject horizontally polarized light into the fabricated device—shown in Figure 2(b)—and measured the outputs with a spectrum analyzer. After normalizing the spectra to those of a reference waveguide, we extracted the excess loss (the power lost in the device), the imbalance (the deviation from perfectly symmetric splitting between the two outputs), and the phase error (the deviation from the ideal 90° phase shift between the outputs). The experimental results—see Figure 2(c)—reveal that the device indeed exhibits high performance over a 300nm wavelength span at telecommunication wavelengths, outperforming conventional MMIs by a wide margin.

In summary, we have demonstrated a new silicon beamsplitter with high performance and an ultra-broad bandwidth at telecommunication wavelengths, using waveguides patterned at a sub-wavelength scale. Our results pave the way towards complex, broadband optical systems integrated on a single chip, for applications ranging from optical communications to sensing. Our future work in this area will include identifying further devices that can exploit the properties of sub-wavelength structures and extending their application to other wavelength ranges.

The authors acknowledge funding from the Ministry of Economy and Competitiveness (Spain), National Program for Research Aimed at the Challenges of Society (co-financed by the European Regional Development Fund) projects TEC2013-46917-C2-1-R and TEC2016-80718-R, and the University of Málaga.