Hydrogen production from renewable sources is the most promising method to secure energy for future generations.1 One approach to hydrogen production is photocatalysis, which requires the interaction between sunlight (photons) and a semiconducting material.2 Accordingly, the semiconducting material needs to maximally absorb photons, have a high work function metal layer to act as a Schottky barrier3—creating a reservoir of electrons to reduce hydrogen cations to molecular hydrogen—and have, in some cases, another metal oxide layer for fast oxidation of oxygen anions to molecular oxygen.4

Photoexcitation of a semiconductor material creates electrons and holes—charge carriers—that recombine on a timescale much faster than that required for the electron transfer reaction to occur.5 That is, we need to increase the lifetime of the charge carriers to make use of them in catalysis. Hence, photonic band gap (PBG) materials6 designed to have a periodic 3D crystal structure with unit cell dimensions close to the wavelength of the light7 have a key role in photocatalysis.

The design of semiconductor photocatalysts with electronic band gaps (EBGs) that coincide with their PBGs ‘theoretically’ suppresses electron/hole recombination, a result of the lack of corresponding optical energy levels. This feature would make them ideal for photocatalysis and, therefore, the combination of slow photons at the edge of the PBG (increasing light absorption) and the inhibition of spontaneous light emission at the desired wavelength is poised to significantly increase photocatalytic reaction rates. Here, we describe our recent work with gold/titanium dioxide (Au/TiO2) PBG semiconductor materials.8, 9

We designed and made TiO2 PBG semiconductor materials with periodicities (i.e., unit cell repeat distances) between ∼100nm and 500nm,8 on top of which we have deposited Au to act as both a Schottky barrier and a plasmonic material to harvest the largest possible fraction of sunlight.9 We prepare these Au/TiO2 PBG materials with an inverse opal (IO) structure (i.e., repeating nanoscale voids within a solid shell): see Figure 1. Initially, the TiO2 precursor (typically a titanium alkoxide) is added to a close-packed arrangement of polymethyl methacrylate (PMMA) beads followed by deposition of Au nanoparticles (Route 1), or the Au is deposited first (Route 2). Calcination at 450°C removes the PMMA beads, and the resulting IO material is characterized using transmission electron microscopy (TEM) and x-ray diffraction (XRD): see Figure 1. The characterization data shows that Route 2 results in undesired large crystallites of Au, whereas Route 1 gives disperse Au particles with diameters of ∼5nm. The TEM and XRD results also show two types of IO Au/TiO2 material, with λmax (the PBG position for first order Bragg diffraction) of 360 and 580nm, respectively. 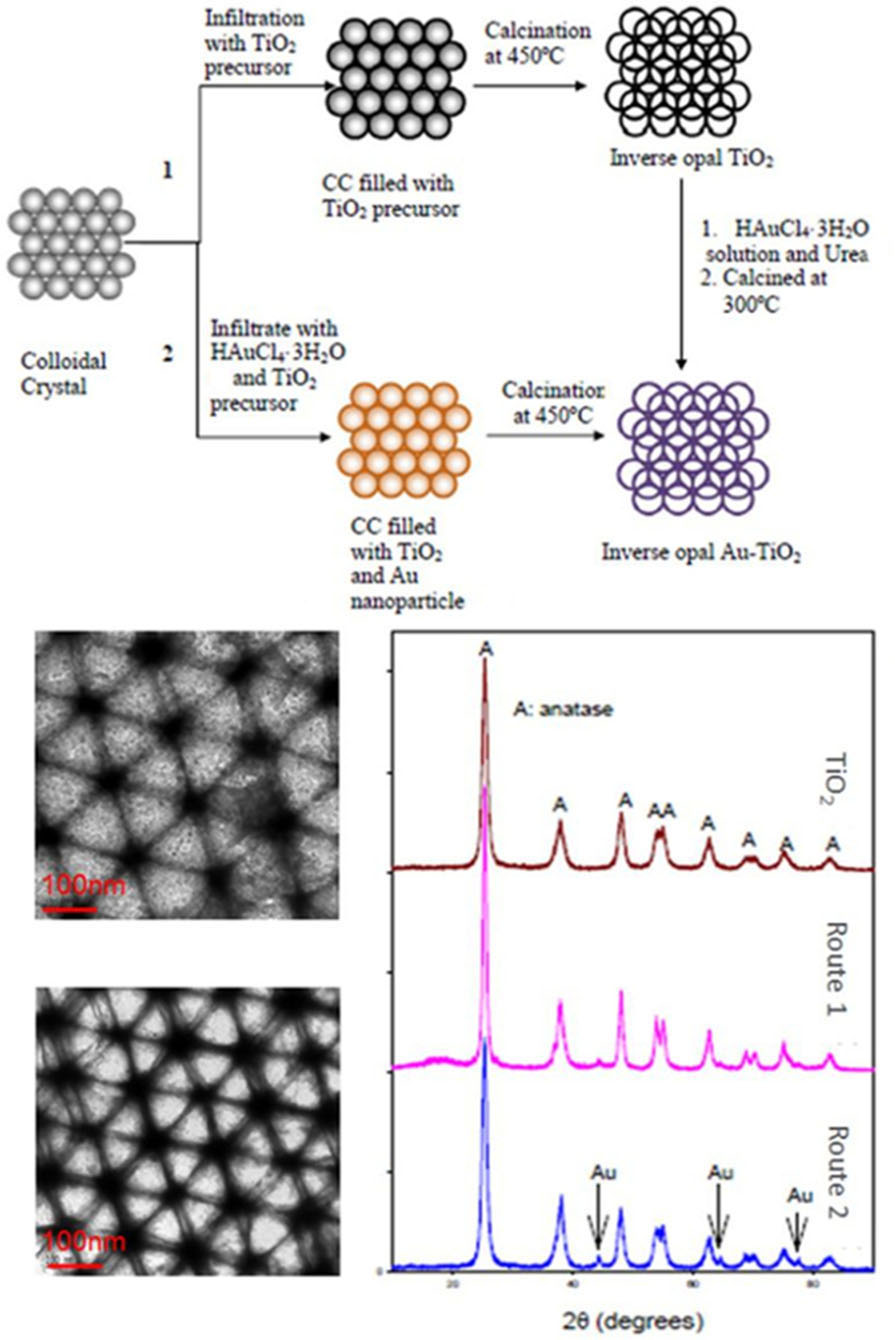 The PBG of materials depends on the interplanar unit cell spacing (dhkl in nm), the average refractive index of the material (navg), and the angle of the incident light with respect to the surface normal (θ), i.e., λmax=2dhkl(n2avg−sin2θ)1/2 in which λmax in nm corresponds to a particular set of face-centered cubic (fcc) crystal planes. Typically, TiO2 IO materials have ∼10–20% solid volume and navg in air of 1.1–1.25. Thus, by working on the periodicity of the material, the incident light angle, and the average refractive index we can tune the PBG of the material to coincide with that of the EBG. For example, for first order diffraction on the fcc(111) planes—taking dhkl as 160nm (in this case the planar center-to-center distance, D), θ 90°, and navg 1.5 (in ethanol)—the PBG is 390nm, which is at the edge of the TiO2 EBG (380 and 400nm for the anatase and rutile mineral forms of TiO2, respectively).

We carried out photocatalyzed reactions for the production of hydrogen from water (in the presence of 0.5% ethanol by volume) with Au/TiO2 materials in both powder and IO forms. The resulting reaction rate data indicates that both types of IO Au/TiO2—the smaller unit cell (λmax 360nm/D 200nm) and larger unit cell (λmax 580nm/D 310nm) forms—perform better than the powder form (see Table 1). Moreover, the smaller unit cell IO performs better than the larger unit cell IO. Although the exact energy gap of the PBG material cannot be determined in this work—as it is in randomly orientated macroparticle form and because the light excitation is diffuse (i.e., at a range of wavelengths)—these conditions do exploit the variable angular nature of sunlight excitation. Also, the increased performance of the smaller unit cell Au/TiO2 IO under direct sunlight compared with UV light may be a result of a plasmonic contribution by the Au in the material.

Table 1.Photocatalyzed reaction rates for hydrogen production from water using powder and inverse opal (IO) forms of the Au/TiO2catalyst. The UV light intensity is ∼3–4mW/cm2at 360nm (from a 100W mercury lamp) and the direct sunlight has a UV contribution of ∼3mW/cm2with a visible light contribution of ∼50mW/cm2. wt%: percent by weight.

In summary, we have designed and fabricated IO Au/TiO2 photocatalytic materials for hydrogen production. These PBG materials perform better than the powder form of Au/TiO2, and the PBG can be tuned by altering the unit cell repeat distance of the material. These results confirm the potential of IO materials as light harvesting catalysts for solar hydrogen production, arising from decreased electron/hole recombination rates and their ability to function at different orientations corresponding to different angular distributions of sunlight. Our future research will focus on the role of localized surface plasmon resonance (LSPR) in PBG materials with nanostructured Au layers, as the merits of combining PBG materials and LSPR is a current area of interest10 and we have recently shown that LSPR can increase photocatalytic reaction rates.11

Hicham Idriss is a fellow at SABIC-CRD based at King Abdullah University of Science and Technology and an honorary professor at the Department of Chemistry, University College London. He received his undergraduate and postgraduate education at the University of Strasbourg, France.