Optical components move a high-resolution laser-scan pattern contained in a small field of view across a larger area, eliminating the need for heavy steering mechanisms on platforms such as helicopters.
19 January 2017
Philip Church, Justin Matheson and Gilles Roy

Light detection and ranging—i.e., LiDAR, a method that uses pulsed laser light—relies on 3D laser scanners. These scanners are used in a large variety of manned and autonomous applications that require real-time 3D-perception sensors for obstacle detection and avoidance. 3D laser scanners that can operate in harsh environments and conditions with poor visibility are particularly desirable. For example, one application for such a device could augment the situational awareness of helicopter pilots as they land in unprepared terrain, where the downwash of the rotors can cause poor visibility by stirring dust, sand, or snow on the ground.1, 2 In addition to penetrating obscurants, such a scanner would ideally be capable of achieving a high enough resolution to enable the detection of small objects that could cause damage to a helicopter, such as wires, metal rods, and fence posts. It is equally important for such a LiDAR system to cover a large field of view (FOV).

These requirements are difficult to implement in a single compact system. For example, in one existing approach, a LiDAR is mounted on mechanical gimbals to steer a small field of view in different directions. However, this approach adds weight, volume, complexity, and cost to the system. It also introduces additional uncertainties that arise as a result of errors in the angular positions of the gimbals.

Our work seeks to overcome these issues, and to meet the demands for a robust LiDAR system. We have therefore developed a unique and innovative approach based on the use of compact optical components in which a small-FOV scan pattern can be steered within a larger field of regard (FOR). For this purpose, Neptec has developed 3D laser scanners (i.e., OPAL) that can penetrate dense obscurant conditions considerably better than the naked eye. The OPAL scanner uses Risley prism-pair technology, where two superimposed prisms are independently rotated by hollow shaft motors. A laser pulse traveling through the hollow shaft motors is bent by the rotating prisms to form a scan pattern that comprises several rosettes. This implementation offers a number of advantages, including a multitude of possible scan patterns, rapid generation of non-overlapping patterns, and a conical FOV with very high data density around its center. The geometric and material properties of the prisms define the conical FOV of the LiDAR, which can typically be set between 30 and 120°.

Ideally, the operator of such a system would be able obtain very high data density at a particular location, with the additional flexibility of being able to quickly move this high-density FOV to another area within the FOR. As the result of a collaboration between Neptec and Defence Research and Development Canada, we have together developed a unique scanner prototype using double pairs of Risley prisms3 that achieves this aim. The first prism pair generates a 30° FOV, which may then be steered within a larger 90° FOR by employing the second pair of prisms. This setup has the advantage of a high-resolution scan-pattern footprint that can be moved quickly and randomly within a larger area, thereby eliminating the need for mechanical steering equipment. Moreover, the FOR is not limited to 90° and can be extended to something on the order of 120°. An illustration of this arrangement is shown in Figure 1(a), and a photo of our double Risley pair (DRP) scanner prototype is shown in Figure 1(b). 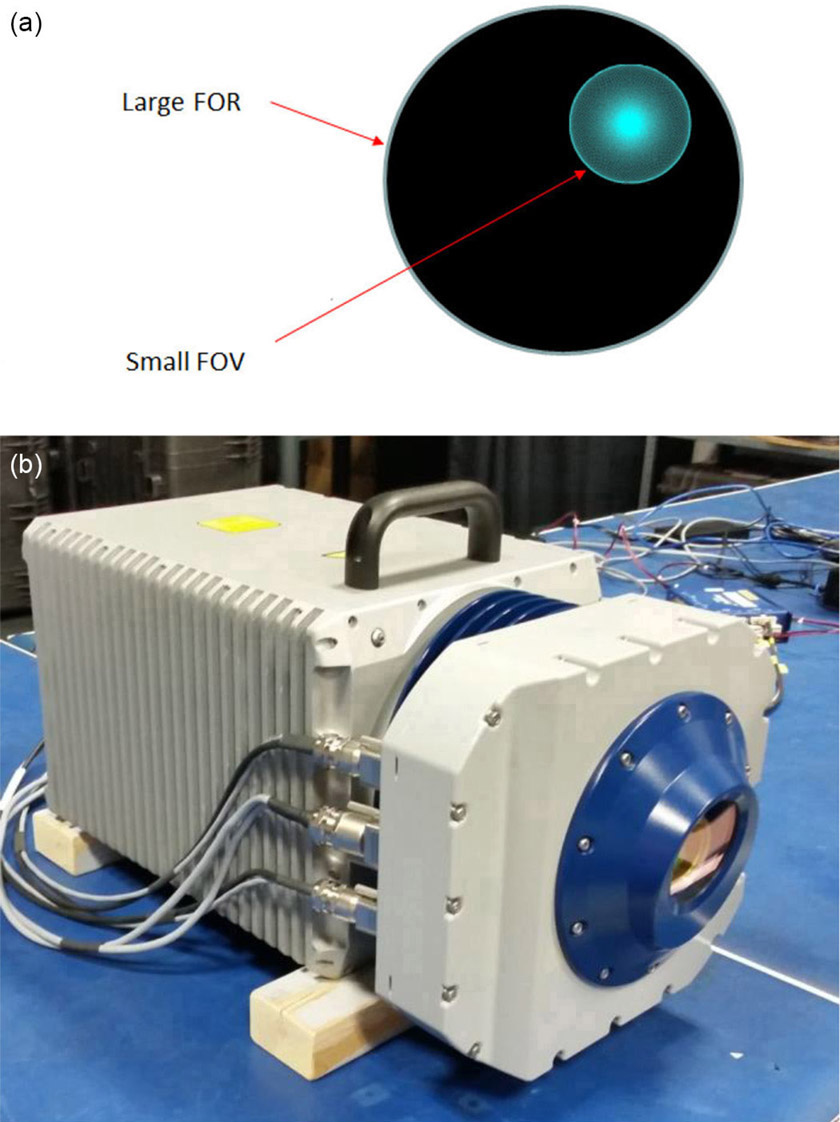 Figure 1. (a) Concept for our steerable LiDAR platform, based on a double Risley pair (DRP). Two prism pairs are used to generate a small, high-data-point-density FOV that can be moved randomly within a large field of regard (i.e., FOR). (b) Our DRP LiDAR-system prototype.

In terms of its operational capabilities, our DRP can be used aboard an aircraft for a range of operations. For example, the system can scan a landing zone with high-resolution information, thereby increasing the chance of detecting small threatening obstacles (e.g., posts or wires). The system also offers a station-keeping capability, where the aircraft motions are compensated by the steering mechanism to keep the LiDAR FOV locked on an area of interest. The DRP could also be employed for tracking a small moving object in the FOR. Additionally, it could be moved by an operator to steer the high-resolution FOV to chosen locations, or over random spots by a computer program.

Figure 2(a) shows LiDAR data obtained with our DRP prototype. In this application, the small 30° FOV is moved horizontally across the larger 90° FOR. The two sectors shown in Figure 2(b) correspond to the high-density FOV being steered to scan locations on either side of the overall FOR. The resulting data is color-coded to show the elevation of objects in the scene, where red- and blue-colored areas correspond to objects at lower and higher elevations, respectively. 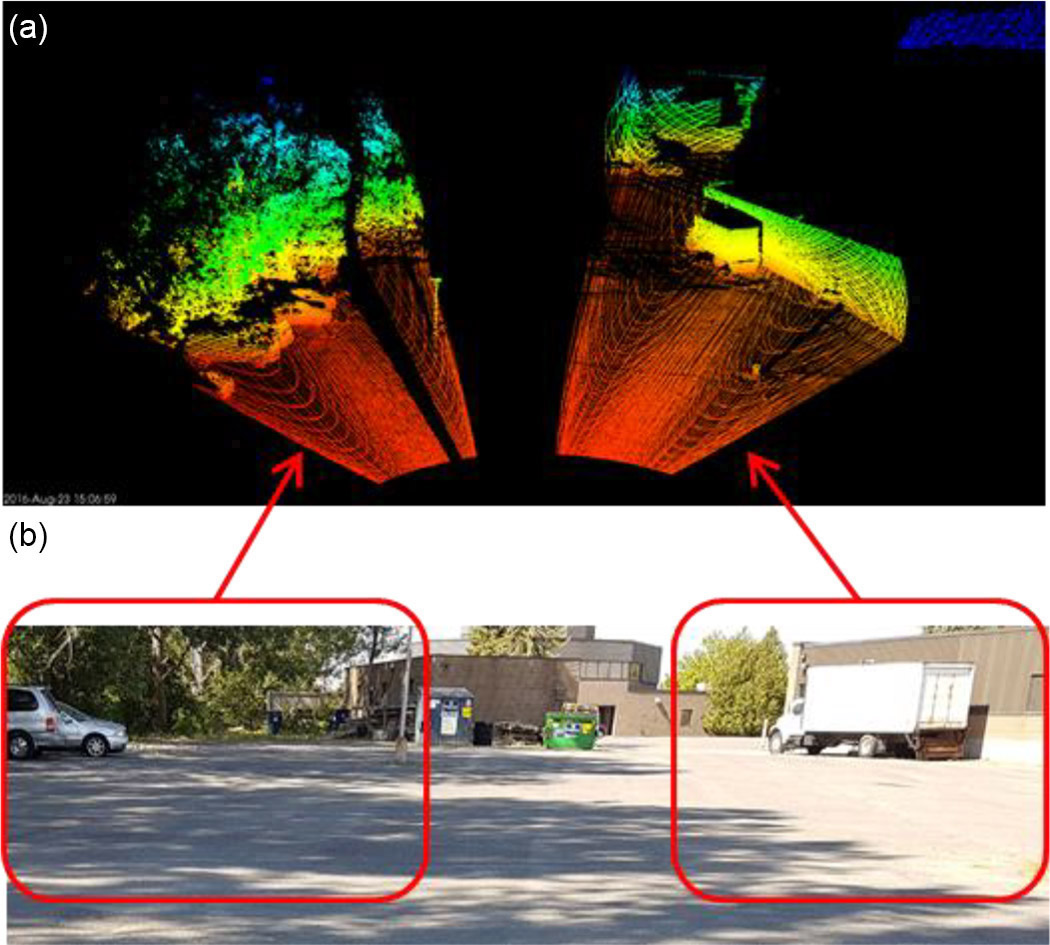 Figure 2. Data obtained using our DRP LiDAR system. (a) LiDAR data of two vehicles, obtained by moving the small 30° FOV across the larger 90°FOR, shown in (b). The images are color coded to reflect the elevation of scanned objects, from red (i.e., the ground) to blue.

In summary, we have produced a compact LiDAR that is capable of steering a small, high-resolution FOV within a larger FOR, without the need for additional heavy and costly mechanical systems. As part of our on-going efforts, we will test our prototype aboard aircraft to determine its performance in poor visibility (i.e., caused by dust and snow).

Philip Church has been with Neptec for over 16 years. He has been working on the development of the OPAL LiDAR sensor for use in harsh and degraded visual environments since 2006. Prior to Neptec, he worked at General Dynamics in various electro-optical sensor development projects for 15 years.

Justin Matheson is an applications engineer. He holds a BSc in mechanical engineering from Queen's University, Canada, and his research focuses on advancing LiDAR technology for degraded visual environments and aerial applications.